Concept of Family in Hundred Years of Solitude

As a recurring pattern keeps surfacing throughout a text, it reveals an idea that the author wants to prove to the reader. This thread contributes to the development of a work’s major theme. It continually reiterates a point to capture the attention of a reader and reveals its significance to the meaning of the work. In One Hundred Years of Solitude, Gabriel Garcia Márquez is trying to elucidate how the Buendía family are endlessly trapped within the fates that echo their family history.

Don't use plagiarized sources. Get your custom essay on
“ Concept of Family in Hundred Years of Solitude ”
Get custom paper
NEW! smart matching with writer

These decisions have confused the Buendía family on whether or not they are in the past, present, and future. This deception of time has created utter solitude in each family member because there is no way of escaping the effects that haunt them throughout their life.

In One Hundred Years of Solitude, Márquez’s use of recurring events throughout the Buendía ancestry contributes to the idea that the action someone takes now will have effects that eventually catches up with them. This idea is supported by the birth of the last Aureliano, the experiments of Jose Buendía Arcadio, and the return of Amaranta Úrsula. Perhaps, the only reason why the Buendía family are trapped in this time loop is because they believe that their fates are predetermined and are thus submissive to whatever happens.

Márquez wants us to understand that no matter a person’s determination, the fatalist progression of history is impossible to overcome.

From the time Jose Arcadio Buendía and Úrsula Iguaran came into the world, it was prophesied that their marriage would initiate a chain of problems that would plague their family until the end of time. It is this act of incest that would mark the downfall of the family and eventually wipe them off of the face of the earth. The birth of a child with a tail of a pig, the last Aureliano, would be the sign of their imminent doom. The family warns both cousins about what would happen if they married each other, but José Arcadio Buendía says he doesn’t care if his child is born with a deformity because he is in love with Úrsula. The constant fear of incest and its punishment, the birth of child with a pig’s tail, creates an array of problems for the Buendía family, yet their fear is not strong enough to overcome the power of their sexual attraction to their relatives. Throughout the story Márquez indicates that, despite the pervasive fear of a child with a pig tail, the real danger of incest comes from its social and psychological effects, the divisions in the family.

For one, the Buendía’s inability to grow their family beyond its original bloodline exaggerates their isolation and solitude. It is towards the end of One Hundred Years of Solitude where the prophecy is fulfilled and everything becomes true of the family. “They were not alarmed. Aureliano and Amaranta Úrsula were not aware of the family precedent, nor did they remember Úrsula’s frightening admonitions, and the midwife pacified with the idea that the tail could be cut off when the child go his second teeth,” (412). This inevitable event was prolonged by the incestuous relationships of the family, but it was predestined from the start of the family line. The question is whether the inevitable doom of the family line could have been prevented if the rampant incestuous relationships were stopped. Is it possible for one of the family members to have free will or is everyone’s life already predestined?

In the beginning of One Hundred Years of Solitude, Jose Buendía Arcadio, the patriarch of the family, is quick to realize that everything he wants to know is in the realm of science. To uncover these truths, he would have to act upon those impulses and see where it would lead him. This immense search for knowledge and desire for progress eventually drives Jose Buendía Arcadio into utter solitude. Increasingly, he withdraws himself from human contact, becoming unkempt, antisocial, and interested only in his pursuit of knowledge. However, this utter solitude causes Jose Buendía Arcadio to reflect on the past and the actions that he took that led him here. He has visions of the man he killed, Prudencio Aguilar, and is wracked with sorrow over the solitude of death. “The fever of insomnia fatigued him so much that one dawn he could not recognize the old man with white hair and uncertain gesture who came into his bedroom. It was Prudencio Aguilar,” (77).

The moment Jose Buendía Arcadio became entranced with science, he started the endless cycle of insanity. Thus, it lead him to remember the death of Prudencio Aguilar, causing him to be convinced that the same day is repeating itself over and over again. To end this suffering, Jose Buendía Arcadio chains himself to a tree where he spends the rest of life mourning over the death he caused. Parallel to this, the son of Jose Buendía Arcadio, Colonel Aureliano Buendía, spends much of his life away from home. However, he ultimately follows his father’s footsteps, secluding himself in the workshop to focus on his studies of alchemy and refusing to see the ways in which his life mirrors his father’s. It goes to show that the Buendía family are haunted by the actions taken by their ancestors.

The closest anyone has come to breaking free of the time loop is with Amaranta Úrsula. Amaranta Úrsula, like most girls in the Buendía family, is sent away to a private boarding school in Belgium. This is where she marries outside of the family to a Flemish man named Gaston. However, her nostalgia for home leads her back to Macondo, where she finds herself blinded by a false reality of the place, rather than seeing it for the failing city it truly is. Despite her having successfully escaped Macondo, she cannot help but be drawn back to the magical place where she grew up. Amaranta Úrsula remains convinced that she has the power to turn Macondo into a vibrant city again, proving her love for the city. This nostalgia is what traps her in an idealized past rather than the reality of the present. Another example would be the way she abandons her passionate love with Gaston for the nostalgic joy that Aureliano brings her.

It proves that she remains firmly trapped in the past, rather than creating a new life for herself. She is reluctant to cheat on her husband as it goes against her morals, but she eventually gives in fulfilling the family prophecy. “Amaranta Úrsula remembered the afternoon on which she had gone into the silver shop and her mother told her that little Aureliano was nobody’s child because he had been found floating in a basket. Although the version seemed unlikely to them, they did not have any information enabling them to replace it with the true one,” (408). She knew that it was possible for her and Aureliano to be related, but she still engaged in sexual love with him, a love absent of any type of passionate emotion. Thus, she became pregnant with the child of Aureliano. Amaranta Úrsula wants to name her child with a non-familiar name, but Aureliano insists on the name Aureliano, which implies that the next generation will not escape the past, either. Amaranta Úrsula’s attempt to give the child a name that doesn’t come from the family follows the pattern of women trying to break away from fate, the fate of having a child born with a tail of a pig as the product of incest.

From the birth of the last Aureliano, the experiments of Jose Buendía Arcadio, and the return of Amaranta Úrsula, Gabriel Garcia Márquez elaborates on the idea that the action someone takes now will have effects that eventually catches up with them. He believes that this family is endlessly trapped within the fates that echo their family history. Thus, it is impossible to alter the outcome of the family as all of their lives have been predestined from the beginning of time. It was fully initiated when Jose Arcadio Buendía and Úrsula Iguaran marry each other and have and incestuous relationship. This union causes a downward spiral that ultimately leads to the end of the family legacy. Each family member are haunted by the decisions they have made and also by the decisions their ancestors have made. It is from these decisions where the true nature of the Buendía family is revealed. The Buendía family are stuck in utter solitude with no way of escaping the effects that haunt them throughout their life. Gabriel Garcia Márquez makes it clear that history of the Buendía family is destined to repeat itself over and over again.

Concept of Family in Hundred Years of Solitude. (2021, Dec 03). Retrieved from http://studymoose.com/concept-of-family-in-hundred-years-of-solitude-essay 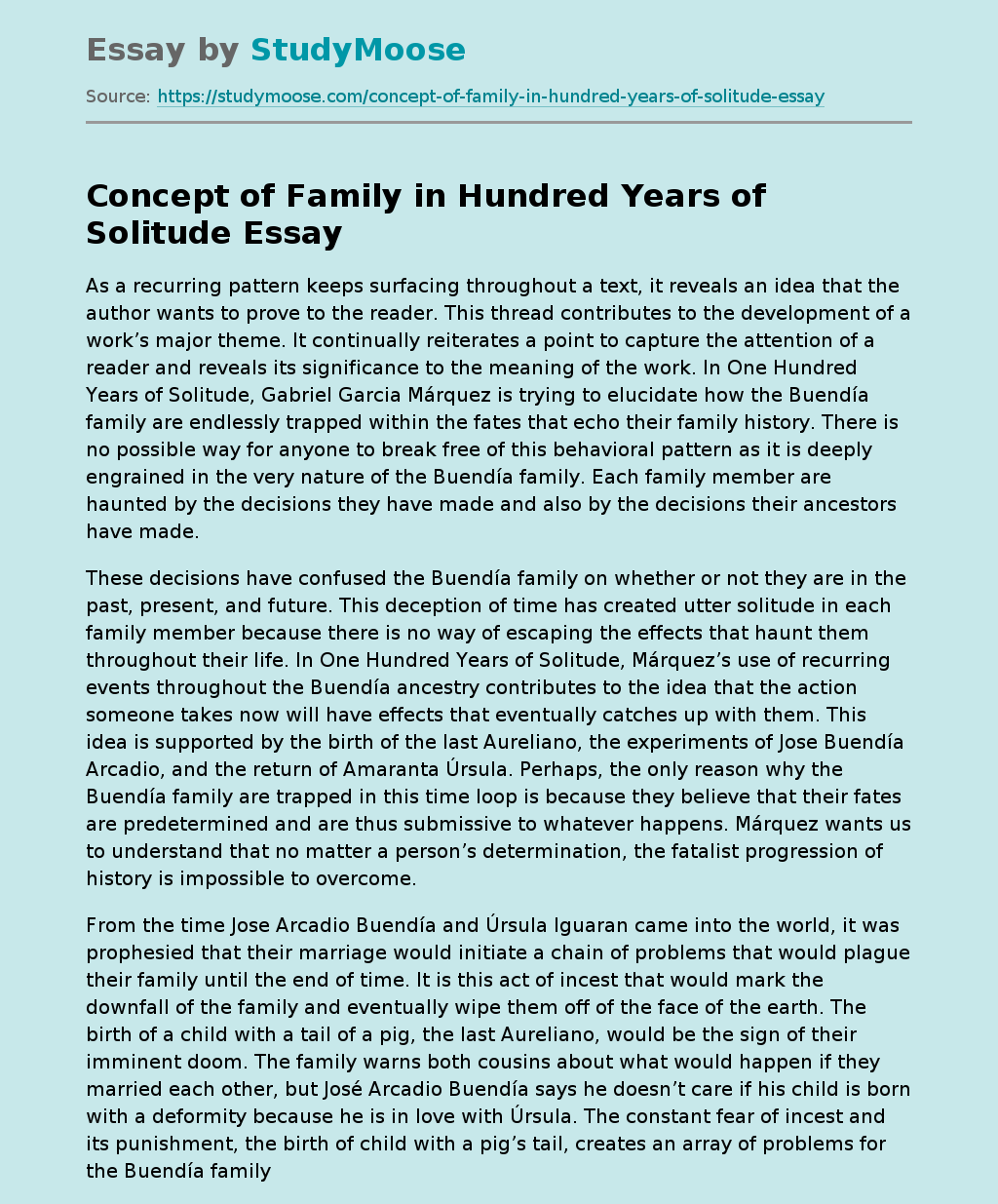