The Hundred Years War , a critical part of our history. It was dreadful and never ending . This war changed the social and economic status of many countries over this long period of time. Many people died, if not from the war then from the frightful disease called The Black Death. The war changed the English and France people’s lives forever.

Joan of Arc, a French peasant girl that brought the ultimate French success. She claimed that God spoke to her , and told her that King Charles VII had to be crowned and if the French soldiers stopped cursing and doing mischievous things , then they will defeat the English.

Don't use plagiarized sources. Get your custom essay on
“ The Hundred Years War ”
Get custom paper
NEW! smart matching with writer

The French men listened to what she had to say and the English left France. In Documents six and seven we are given the letters that Joan wrote to the king. She wrote these in a demanding tone , asking the king of England to return all of the things he took away from the French people.

Proficient in: Joan Of Arc

Document six says “She is sent by God to reclaim the royal blood, and is fully prepared to make peace, if you will give her satisfaction.” In document seven it says “King of England , if you do not do these things , I am the commander of the military and in whatever place I shall find your men in France, I will make them flee the country.” This means that Joan wanted everything that was taken from France back, if the King refused to return these she threatened him with God.

She was saying that if the English do not obey to her words they will be harmed by the power of God.

France didn’t really benefit from the war , they were mostly harmed by it. In documents 1,3,5 we are told about the English intrusion in France. In document 3 it says “These mischievous people thus assembled without captain or armor robbed, brent and slew all gentlemen that they could lay hands on, and forced and ravished ladies and damsels.” In documents 1 and 5 we are also told that because the English had no mercy and killed everyone including farmers, there was no more agriculture in France.

All of the lands were uncultivated. The only agriculture that was left was next to cities and urban areas so thieves wouldn’t be able to steal crops. At the end of war France regained all of the lands that were taken away from them by England. The only town that they couldn’t regain was Calais. The French reconquered Normandy and kicked out the English from Aquitaine.

This tragic war that lasted 100 years seemed like it would never end , but it did. It had bad consequences for both England and France. Sometimes it even seemed like no one even remembered what it was caused by. It all started from England and France not being able to decide who deserved the Aquitaine. Maybe if they did, everything could of turned out differently. Maybe all of these innocent people wouldn’t of died from a horrific death and would of lived happily.

The Hundred Years War. (2016, May 21). Retrieved from https://studymoose.com/the-hundred-years-war-essay 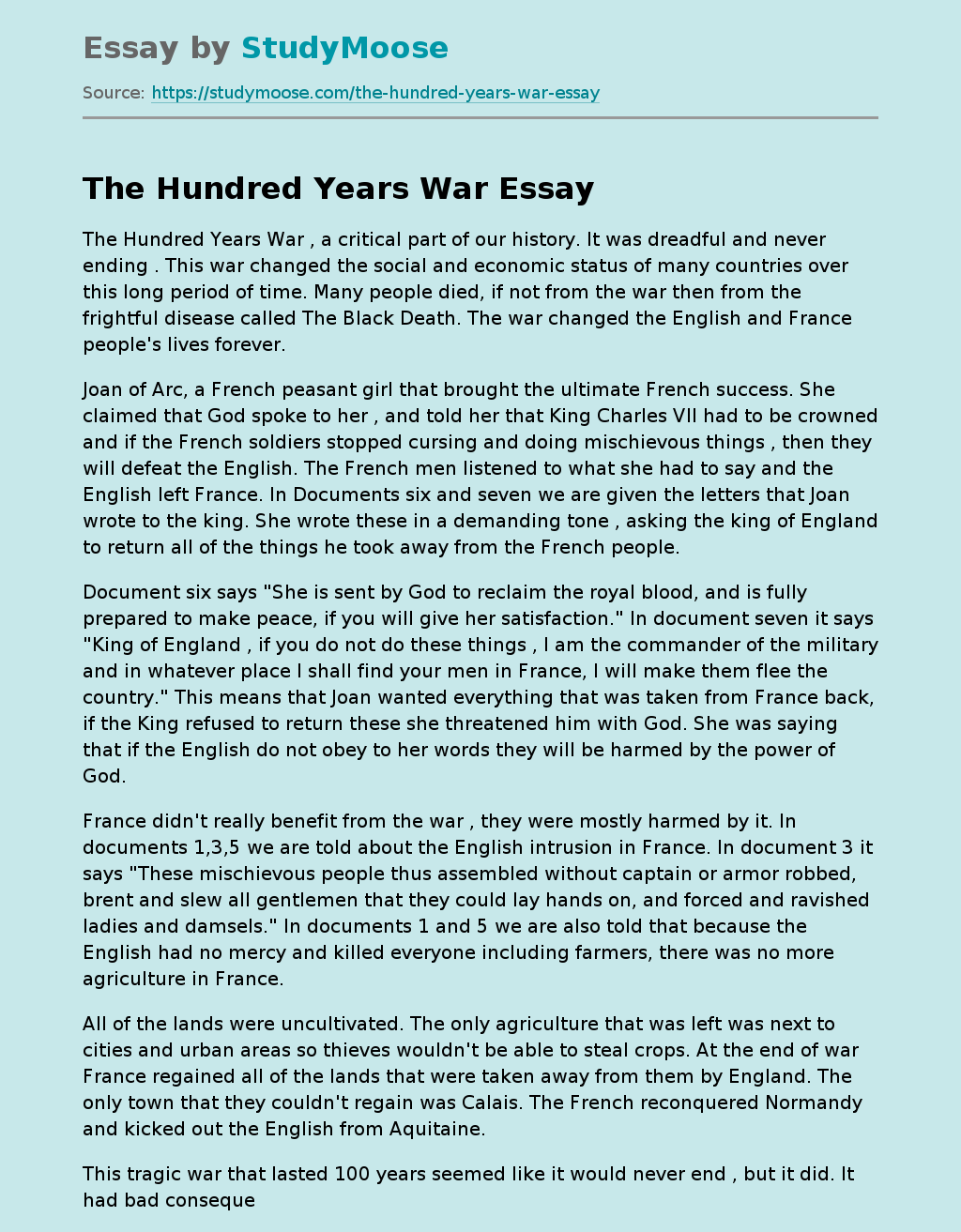