The Result of Obsession in "One Hundred Years of Solitude"

In One Hundred Years of Solitude, by Gabriel Garcia Marquez, Jose Arcadio Buendia and his wife move to Macondo, a young city, where they can start a family away from the pressures and scrutiny of their old home. Jose Arcadio Buendia “whose unbridled imagination always went beyond the genius of nature and even beyond miracles and magic” (8), constantly used his energy and time to develop inventions whose purposes were clear to him only, and whose results were lackluster compared to their input.

Don't use plagiarized sources. Get your custom essay on
“ The Result of Obsession in “One Hundred Years of Solitude” ”
Get custom paper
NEW! smart matching with writer

Unfortunately, his redundant and unmanageable vigor for his practice can be seen in other members of his community. Melquiades, a large gypsy trader, often visited Macondo with his band of gypsies and with new inventions. He would come to write an unintelligible prophecy on parchments whose hidden secrets would infatuate Jose Arcadio Segundo, the great-grandson of Jose Arcadio Buendia, to no end. And after many years at war, the aged Colonel Aureliano Buendia, son of Jose Arcadio Buendia, would spend the rest of his life in a cycle, making little gold fish from other gold fish he had made before with no profit.

Marquez builds the theme that the obsessive pursuit of a practice degrades one’s ability to be a productive member of their community. This theme is developed by Jose Arcadio Buendia and his inventions, Jose Arcadio Segundo and the parchments, and Colonel Aureliano Buendia and his little gold fish.

Each time the gypsies came to Macondo with a new product, Jose Arcadio Buendia desired to develop that product into his own invention.

After Melquiades came to Macondo to show off a magnet, Jose Arcadio Buendia obsessed over what future invention that magnet could be to him. “Jose Arcadio Buendia… thought that it would be possible to make use of that useless invention [the magnet] to extract gold from the bowels of the earth” (8). In Jose Arcadio Buendia’s pursuit of new inventions, he constantly ignores the rational pleas of others and sacrifices the wealth of his family while on his inventive tangents. After these tangents have passed, the result Jose Arcadio Buendia is left with is fodder compared to the energy and money he put into his creation.

When Jose Arcadio Buendia decides to buy Melquiades’ magnet, he trades his family’s livelihood at the dismay of his wife. “…so he [Jose Arcadio Buendia] traded his mule and a pair of goats for the two magnetized ingots. Ursula Iguaran, his wife, who relied on those animals to increase their poor domestic holdings, was unable to dissuade him” (8). After several months of using his invention, all he had to show for his work was “a suit of fifteenth-century armor which had all of its pieces soldered together with rust and inside of which there was the hollow resonance of an enormous stone-filled gourd” (8). The detail that the suit of armor was rusted and had a hollow resonance exemplifies the fact that Jose Arcadio Buendia’s obsessive attempts at creating new inventions are degraded and hollow, and therefore, can bring nothing good to his family. His ability to sacrifice his family’s well-being in the pursuit of his obsession shows his inability to be a productive member of his community.

The reason Jose Arcadio Buendia holds a fascination with Melquiades’ parchments is because they hold the truth of the banana plantation massacre. All he can manage to mutter after years of solitude trying to decipher the undecipherable is “There were more than three thousand of them… I’m sure now that they were everybody who had been at the station” (153). In this vague, lasting response, Jose Arcadio Segundo makes known that he will not be able to prove that the massacre happened and cannot avenge the massacred with the truth. However, during his pursuit of the truth in the parchments, Jose Arcadio Segundo secludes himself from everyone in the community so much so that they forget of his existence. “…the only thing that disturbed his solitude was the coming and going of Santa Sofía de la Piedad. He asked her, therefore, to leave the meals on the windowsill and padlock the door. The rest of the family forgot about him including Fernanda” (153).

After six months in solitude, Jose Arcadio Segundo is visited by Aureliano Segundo who finds the conditions of Melquiades’ room to be repulsive. Jose Arcadio is in a decrepit state, almost a hollow shell of the man he once was. “After six months of enclosure… Aureliano Segundo removed the padlock… As soon as he opened the door, he felt the pestilential attack of the chamber pots, which were placed on the floor and all of which had been used several times. José Arcadio Segundo, devoured by baldness, indifferent to the air that had been sharpened by the nauseating vapors, was still reading and rereading the unintelligible parchments” (153). Through Jose Arcadio Segundo obsession over the truth of the parchments, his effect on his family becomes minimal to the point where he becomes inexistent in the mind of his immediate community. His inability to dissuade his need to pursue the parchments in Melquiades’ room in solitude renders him an unproductive member of the Buendia community.

After many years at war and wishing to escape its mindset, Colonel Aureliano Buendia spends the rest of his mortal life making little gold fishes in his metal workshop. He initially sells the little gold fish for money. “…Colonel Aureliano Buendia, who was slowly losing all contact with the reality of the nation. Enclosed in his workshop, his only relationship with the rest of the world was his business in little gold fishes… ‘Don’t talk to me about politics,’ the colonel would tell him. ‘Our business is selling little fishes’” (101).

The Colonel’s obsession with making gold fish results from the peace achieved once his mind is in complete focus while making them. In this state, the Colonel is relieved from the effects war had on his mentality. “He [Colonel Aureliano Buendia] needed so much concentration to link scales, fit minute rubies into the eyes, laminate gills, and put on fins that there was not the smallest empty moment left for him to fill with his disillusionment of the war. So absorbing was the attention required by the delicacy of his artistry… the implacable concentration awarded him with a peace of the spirit” (101).

However, the Colonel makes the gold fish using the gold coins he received in payment for the previous batch. Colonel Aureliano Buendia’s practice of making new little gold fish from the same material as his payment makes the process redundant and inefficient, as noticed by Ursula. “With her [Ursula] terrible practical sense she could not understand the colonel’s business as he exchanged little fishes for gold coins and then converted the coins into little fishes, and so on, with the result that he had to work all the harder with the more he sold in order to satisfy an exasperating vicious circle” (101). In total, Colonel Aureliano Buendia’s practice brings no income into the Buendia family. And, to reach the state of mind necessary to be unburdened by the war, the Colonel must completely isolate himself from his community.

In fact, his wish is to die in solitude in the state of mind brought upon by the fishes. “He [Colonel Aureliano Buendia] ordered them [the lawyers] to leave him in peace, insisting that he was not a hero of the nation as they said but an artisan without memories whose only dream was to die of fatigue in the oblivion and misery of his little gold fishes” (108). Colonel Aureliano Buendia’s obsessive pursuit of the state of concentration needed to make the little gold fishes has broken him off from his community. His business was not meant to be a productive entity in the Buendia family, but another fated attempt at calming one’s uncalmable quest resulting from obsession.

Through his novel, One Hundred Years of Solitude, Marquez uses the obsessive pursuit of a practice in Jose Arcadio Buendia towards his inventions, Jose Arcadio Segundo towards Melquiades’ parchments, and Colonel Aureliano Buendia towards his little gold fish to show that obsession degrades one’s ability to be a productive member of their community. Each man, although living in different generations, let their practices consume their ability to function in the Buendia home until all that was left of them was a forgotten memory of a man.

The Result of Obsession in "One Hundred Years of Solitude". (2021, Dec 08). Retrieved from https://studymoose.com/the-result-of-obsession-in-one-hundred-years-of-solitude-essay 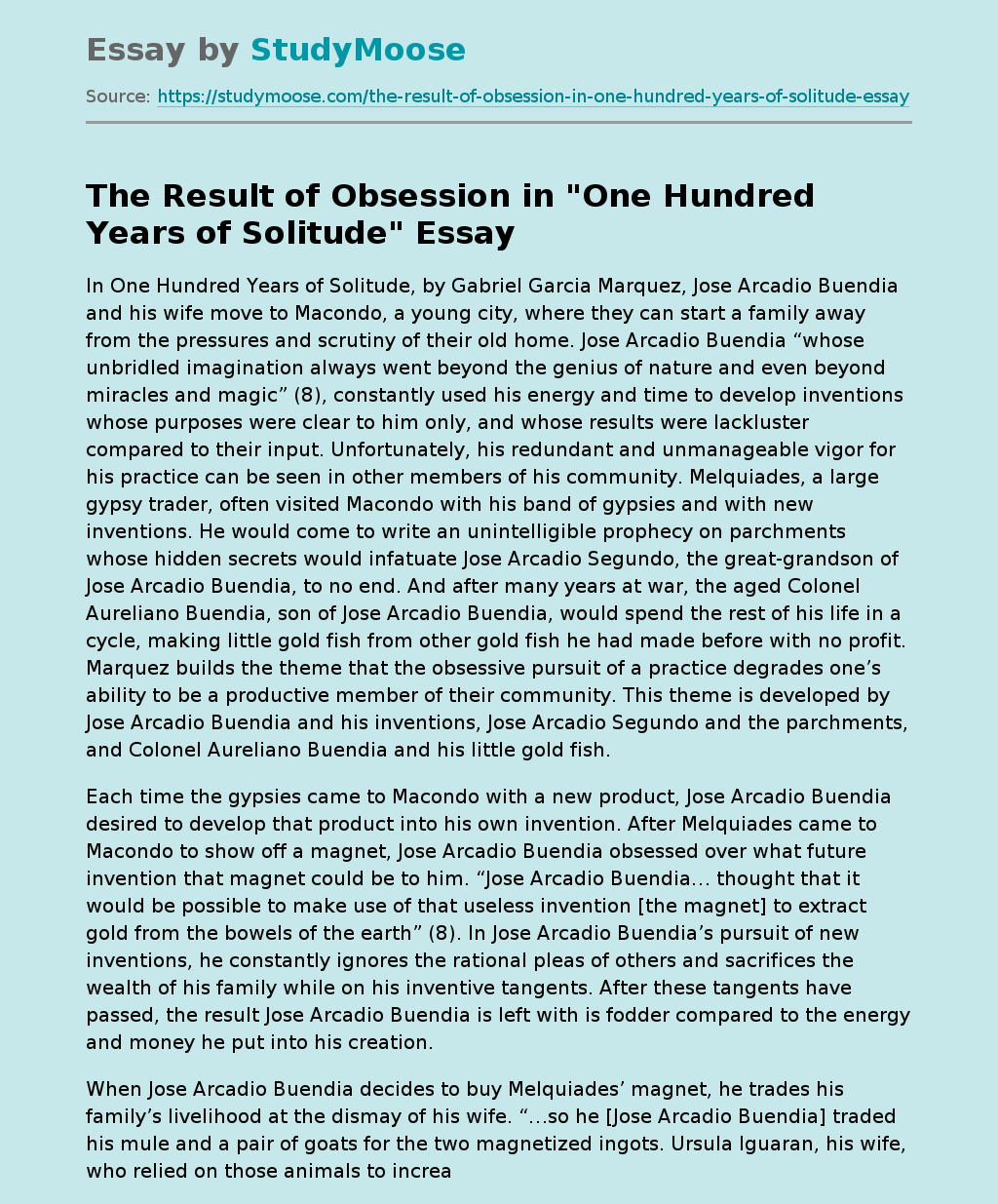