Obsession of Power in Macbeth

In Shakespeare’s Macbeth, Lady Macbeth and Macbeth’s obsession with power caused his downfall. With the guilt and lies of Lady Macbeth, marriage is Macbeth’s big mistake. Lady Macbeth turns his fearless conquest on the fields of war into a bloodbath trail for the gain power. Mangled by the blood on the hands of his wife, he becomes a traitor to everyone around him, her, and even himself.

In the beginning they both desire power and Lady Macbeth starts to put evil thoughts into Macbeth’s head as to how to gain this power.

Don't use plagiarized sources. Get your custom essay on
“ Obsession of Power in Macbeth ”
Get custom paper
NEW! smart matching with writer

Macbeth transforms into a guiltless monster, which ironically causes Lady Macbeth’s downfall. She centers herself completely on her husband and therefore they have a strong bond together. Both Macbeth and Lady Macbeth have a major impact on their tragedies. They both negatively thrive off each other’s greedy unlawful action and choices. Most of us would view ambition as a good quality to have, however the problem with Macbeth is that he is too ambitious, which causes him to do immoral things to get what he wants.

There’s a distinct difference between ambition and obsession that causes greed and harm to others. Macbeth is power hungry and wants to be on top with all the power and glory that comes with it. Lady Macbeth wants the same for her husband, if not even more than he does. The reasoning for that is because she has no name for herself unlike how Macbeth does, she can become queen only with Macbeth as King.

In the beginning, Duncan rules the throne and Macbeth is one of his ambitious warriors. Macbeth is highly desired for his honorable and heroic services he has done for the state. He’s described by his fellow noblemen as a loyal soldier, giving all he has for his country. Macbeth gains respect from Duncan because of his work on the battlefield for all his bravery. “He is impervious to fear when merely natural foes confront him. He is the soldier who will fight till from my bones my flesh will be hacked. Such a soldier command respect. There is nothing puny about him .”

After the witch’s prophecy that Macbeth will be made thane (a rank of Scottish nobility) of Cawdor and eventually king of Scotland, Macbeth begins to have some faint thoughts on murdering Duncan. Lady Macbeth begins to be manipulative, overrides all her husband’s objections and persuades him to kill the king immediately. She gives up her female position and status, in order to prep Macbeth to take the throne for his own. She wishes she was a man, that way she could do it all herself. She views him as a man that’s afraid of what he wants. She becomes to be a control freak, assertive, and more dominant than her husband. “Macbeth has too much ordinary human nature in him to resort to crime without external stimulus, however Lady Macbeth teaches him how to hold back his natural self (Siegel).” Lady Macbeth is completely out of her mind at this point, she will do anything to be queen. She says, “I have given suck and know. How tender  to love the babe that milks me. I would, while I was smiling in my face,  have plucked my nipple from his boneless gums,  And dashed the brains out.” Lady Macbeth is saying that she wouldn’t second guess herself for one second if she had to bash the brains out of her child if that is what it took to get her crown of queen.

Macbeth listens to the witches prophecy but Lady Macbeth is a bigger influence to him. When you are in love normally you don’t think your significant other would make you do something that would bring harm to yourself. When reading Macbeth, you automatically assume Lady Macbeth has numerous psychological problems. Macbeth doesn’t take note on how truly insane she is. She had zero guilt inside her, she had a drive ready to prepare her husband towards a path of power for her own gain. She isn’t technically a bad person, you can conclude that she is blinded for ambition. “It is her blind ambition that, ironically, blinds her to the truth about herself, that she is advocating a marriage of deception, that she believes is not only virtuous but also a necessity to achieving one’s ambition, the crown (Ancona).” Lady Macbeth is conscious of only her desire to gain power and pays close to no attention to the consequences that are sure to follow her selfish actions. To control Macbeth’s guilt she says, “These deeds must not be thought. After these ways; so it will make us mad (Thomson).” She beginning to put ideas in his head, attempting to make him heartless about murder. She is with her husband at the murder, eggs him on, and completes the task by smearing them all with blood, completely outside the guidelines of acceptable female behavior but is done to assist her husband. (Ancona) Macbeth is easily tempted into murder by his wife to fulfill his ambitions to the throne.

Once Macbeth stabs Duncan there is no stopping him. He proceeds to kill Banquo, Fleance, Lady Macduff, and her children. Lady Macbeth manipulated him to kill the king, but the decisions to kill Macduff and Banquo were his own. Banquo was a loyal friend to him, after he killed him we know that he was out of his mind. Each person he killed resulted in another that is needed to be killed, he is losing his mind. Macbeth’s conscience is falling apart to nothing and his response to all his problems is violence and murder. Then not intentionally nor directly, he will cause the death of his wife. Lady Macbeth pushes him to sin, is appealing to his love for her. Lady Macbeth can be considered the reason behind Macbeth’s tragic downfall as a human being. After the murdering Macbeth starts to show major changes, he now feels no guilt for his sins. “Her monomaniacal ambition changes him into a monster, on-not so ironically-whose loyalty even cannon control to the point where she is literally “awakened” by her blind and vaulting ambition to realize she did not want the kind of man she thought she wanted (Ancona).” Macbeth is stepping to the role he wanted but is afraid to kill for it. Lady Macbeth doesn’t have a role in the support of her husband and will go back to the more traditional feminine role. Lady Macbeth tried avoiding thinking about what she’s done but her conscience is eating her soul. She begins to realize the consequences of what she’s done and grows mad from the feelings. She can’t be totally redeemed of her mortal sins. Lady Macbeth begins to have tragic dreams, sleep walks, and she can’t control the guilt anymore. She has become unable to live with this big lie, she sees the only way to escape this is death.

At the end of the play Macbeth is alone. He is hated by all and has lost all his friends along with his wife. All the desperate things he’s done to be king isn’t paying off. Together Macbeth and Lady Macbeth both cause their own downfalls. In the beginning Lady Macbeth convinces him to commit murder for power, once Macbeth has turned into a killing machine the guilt hits Lady Macbeth at once causing her suicide. At the end Macbeth is left with nothing and murdered by Macduff. Macbeth was influenced by his wife, but once she realized what she created it, it was too late. Macbeth could be viewed as a victim of overpowering feminine influence that characterized the world around.

Obsession of Power in Macbeth. (2021, Apr 20). Retrieved from http://studymoose.com/obsession-of-power-in-macbeth-essay 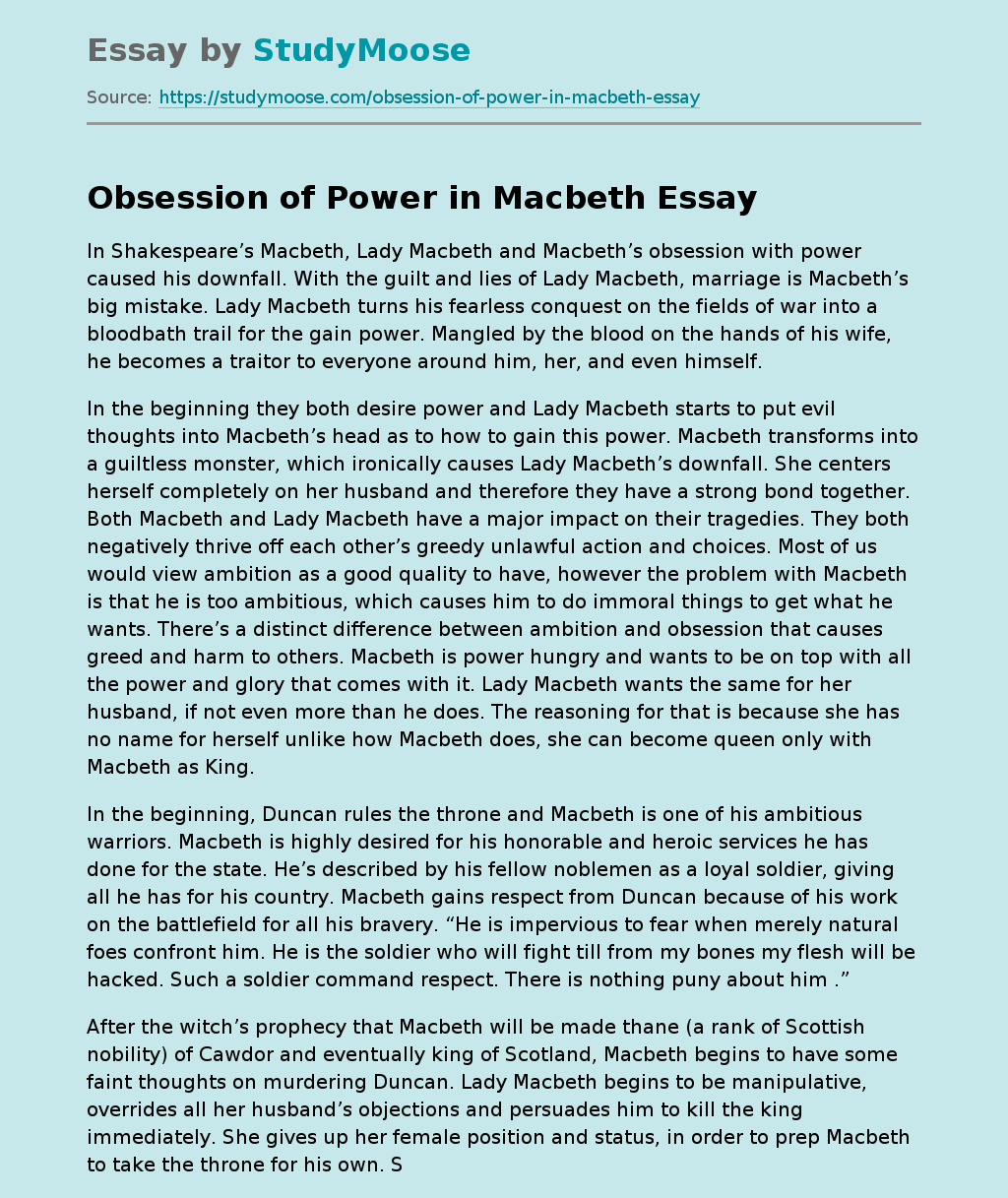