'the Mass Media Encourage People to Think About Themselves All the Time.' to What Extent Is This True

Mass media refers collectively to all media technologies, including the Internet, television, newspapers, and radio, which are used for mass communications, and to the organizations which control these technologies. The main companies own integrated telecommunications, wireless phones, video games softwares, electronic media, the music industry and more. Hence, the mass media is mostly controlled by them. When we argue that the mass media encourage people to think about themselves all the time, what does it actually mean?

From an ordinary individual’s point of view, the mass media would typically revolve around the Internet and affect him directly, that is, all he is exposed to influences the way he will think.

Don't use plagiarized sources. Get your custom essay on
“ ‘the Mass Media Encourage People to Think About Themselves All the Time.’ to What Extent Is This True ”
Get custom paper
NEW! smart matching with writer

We need a media to develop thoughts and ideas. Such is the reliance people need in a world with a wide range of influences to take from which is the mass media. In our work we usually know what we have to do based on our experience and studies, however on our daily lives we rely on the media to get the current news and facts about what is important and what we should be aware of.

However, what we think about when we are exposed to mass media depends largely on ourselves as the mass media has no particular view; in fact there are many views to which the mass media can convey. It is all about how we engage ourselves in it to influence us. The mass media is the driving force of human interaction and social living.

We live in a society that depends on information and communication to keep moving in the right direction and do our daily activities like work, entertainment, health care, education, personal relationships, traveling and anything else that we have to do.

It is therefore, inevitable and in fact vital to embrace the influence of mass media. Again, it is what we like to think that the mass media directs us towards and what we want to get out of mass media to impact ourselves. Hence, it is true to a large extent that mass media encourages people to think about themselves all the time. A celebrity or top model influences a teenager in how she wants to change her appearance to look more attractive, all for her self-interest.

We are constantly exposed to thousands of images of violence, advertising, sex, celebrities and much more, in fact it is known that a child is exposed to about 40,000 ads a year. Also, more women are obsessive with losing weight even when they are not obese, there are many thin women that want to look like the super models and thin celebrities so they engage in eating disorders which leads to severe health issues and even death. Such is the power of mass media in its transmission of information through an ever-expanding variety of means which may even threaten life.

So, how can the mass media not encourage people to think about themselves? It is indeed a hard question to answer. Society is driven too much by self-interest that with mass media to transmit information and ideas, people relate to it via their self-interest. It is too natural a thinking process to dismantle. The idea of self-interest has been proven by Adam Smith, founder of modern economics, who strongly justifies the pursuit of self-interest for the better good of all: ‘individual self-interest is the motivating force, and the built-in regulator that keeps the economy from flying apart is competition’.

Hence, when put into context of the mass media influence on individuals, mass media encourage people to think about themselves and this keeps the economy thriving, and keeps the world going. Some may not agree to it, but such is sad reality of our world we are living in today. As mass media continues to present its ideals and conveys information by the second, we are driven by our personal pursuit as well in improving our lives in society and fulfilling our inner desires. It is therefore true to a very large extent that mass media encourage people to think about themselves all the time.

While it is largely the case, there have been exceptions where mass media encourages otherwise. The idea of mass media is that whatever it embraces and promotes people will be likely affected, and likely to their interest of their well-being. So, when the mass media highlights the poverty in Africa and underdeveloped nations as well as the recent 2011 Japan earthquake and tsunami, people will be influenced too. In this case, they think not for themselves, but for the poor people in Africa and the victims of crises.

What most of us are likely to do is to lend our hand and contribute in monetary help. This is a positive influence of the mass media, and a great impact indeed on helping the needy. As such, it can be seen that mass media can have different influences on people’s mindsets, and not all the time does it encourage people to be self-centred. The argument can go on for as long as one may wish, but one thing for sure is that the mass media is not entirely a driving force of self-centredness. Rather, it is the way people use the mass media to perform tasks and make an impact on different things.

While we as ordinary individuals cannot do much to control the mass media, we can promote the awareness of mass media influence among those around us, and keep a look out whenever someone falls into the trap of pursuing self-interest so much that he forgets the value of life and that life is not to be dictated by mass media alone. As individuals, it is important to stand firm in our values and not be overly influenced by mass media which is revolving around us all the time. It is hard to resist temptation, but with perseverance nothing is impossible. Mass media – beware.

'the Mass Media Encourage People to Think About Themselves All the Time.' to What Extent Is This True. (2020, Jun 02). Retrieved from https://studymoose.com/the-mass-media-encourage-people-to-think-about-themselves-all-the-time-to-what-extent-is-this-true-new-essay 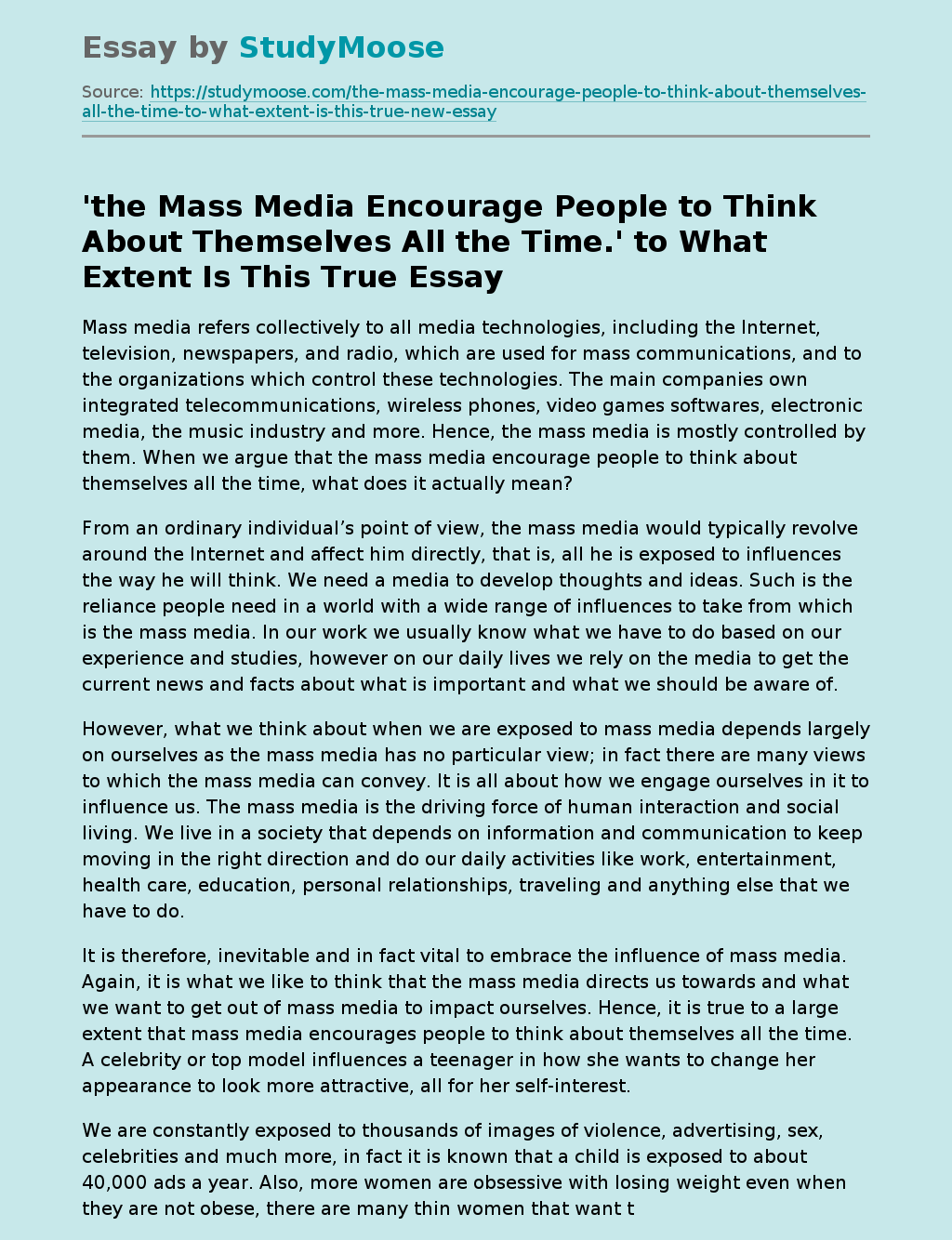