Although it’s been almost two years now, I can still remember that day as if it were yesterday. We were all glued in front of the television, when dad came rushing into the house after work to tell us that he had just bought a new cabin cruiser. He promised us that the following week he’d take us all on a fishing trip. We were all very excited and happy at the prospect of it. I spent the next few days daydreaming about how wonderful it would be.

Turn in your highest-quality paper
Get a qualified writer to help you with
“ Rescue at Sea ”
Get high-quality paper
NEW! AI matching with writer

When the much-awaited day finally came, and dad drove us to the yacht marina, I was awe-struck by the sheer beauty of the boat, shimmering in that hot sunny August morning. After we packed everything onto the boat, dad started the engine and steered it slowly out of the harbour. We headed out until we were a good distance from the shore. Then, when we found what seemed like a good spot for fishing, dad stopped the engine and lowered the anchor.

The sky was crystal clear and the sea was as calm as a sheet of glass.

We spent a good couple of hours basking in the sun, fishing rods in hand, without a care in the world. It was fantastic just being there, staring out at the beautiful blue sea. After we had caught a good number of fish, it was time to eat. Mum had prepared some delicious sandwiches and, famished as we were, we didn’t need much convincing – we sank our teeth into the food like hungry predators and gobbled up the whole lot in a matter of seconds.

We must have lost track of time, chatting and laughing, because the next thing I remember is being plunged into a darkness so thick one could almost cut it with a knife. Looking around, it was all pitch black, as if someone had thrown a drape over us. Then, out of nowhere, a big wave came crushing into the boat, nearly toppling us all overboard. If that wasn’t bad enough, we could hear the ominous rumbling of thunder in the distance – it was unbelievable how the weather had changed so quickly before our very own eyes. The storm was creeping up on us fast and it wasn’t long before all hell broke loose and the rain started to come down in showers. It was like a sheet of water coming down over us, drenching us to the bone/skin. The rain was so dense and heavy that we could barely breathe.

Dad immediately rushed to start the engine but it would not start. He tried and tried, but it was all in vain – the engine was dead. For that split second it took us to realise what was going on, we all just stared at each other without saying a word. The panic-stricken look on our face said it all – we were stranded/left high and dry in the middle of nowhere! We were scared out of our wits. Mum was as white as a ghost. To make matters worse, without the engine, we were at the mercy of the sea. The waves were getting higher and the boat was taking in water, fast.

Then, when we had given up all hope and thought we were doomed, we started to hear what seemed like the sound of a helicopter approaching. At first the sound was very faint and barely noticeable over the sound of the torrential rain and howling wind, but it kept growing stronger and stronger until, one by one, we all realised what it meant – our prayers were answered and we were going to be safe after all! That thought gave us courage, and we started to yell at the top of our voices and to wave, torches in hand, with all our might.

Luckily it didn’t take long for the rescue team to spot us. They manoeuvred the helicopter a few feet above our heads and lowered down the rope-ladder, from which we could all climb to safety. It wasn’t a minute too soon however, because as we peered down into the darkness, we saw our boat capsize and could only get a final glimpse of it, before the hull got completely engulfed by the raging sea. The return trip was as silent as it was miserable. No words could express the way we felt. From the look in our eyes it was evident that we were both relieved and shocked at the same time.

After that traumatic experience I promised myself I would never step on a boat again. The picture of the angry sea trying to pull us down still haunts my dreams at night. At times the images are so vivid that I wake up in the middle of the night, feeling all sweaty and gasping for air. 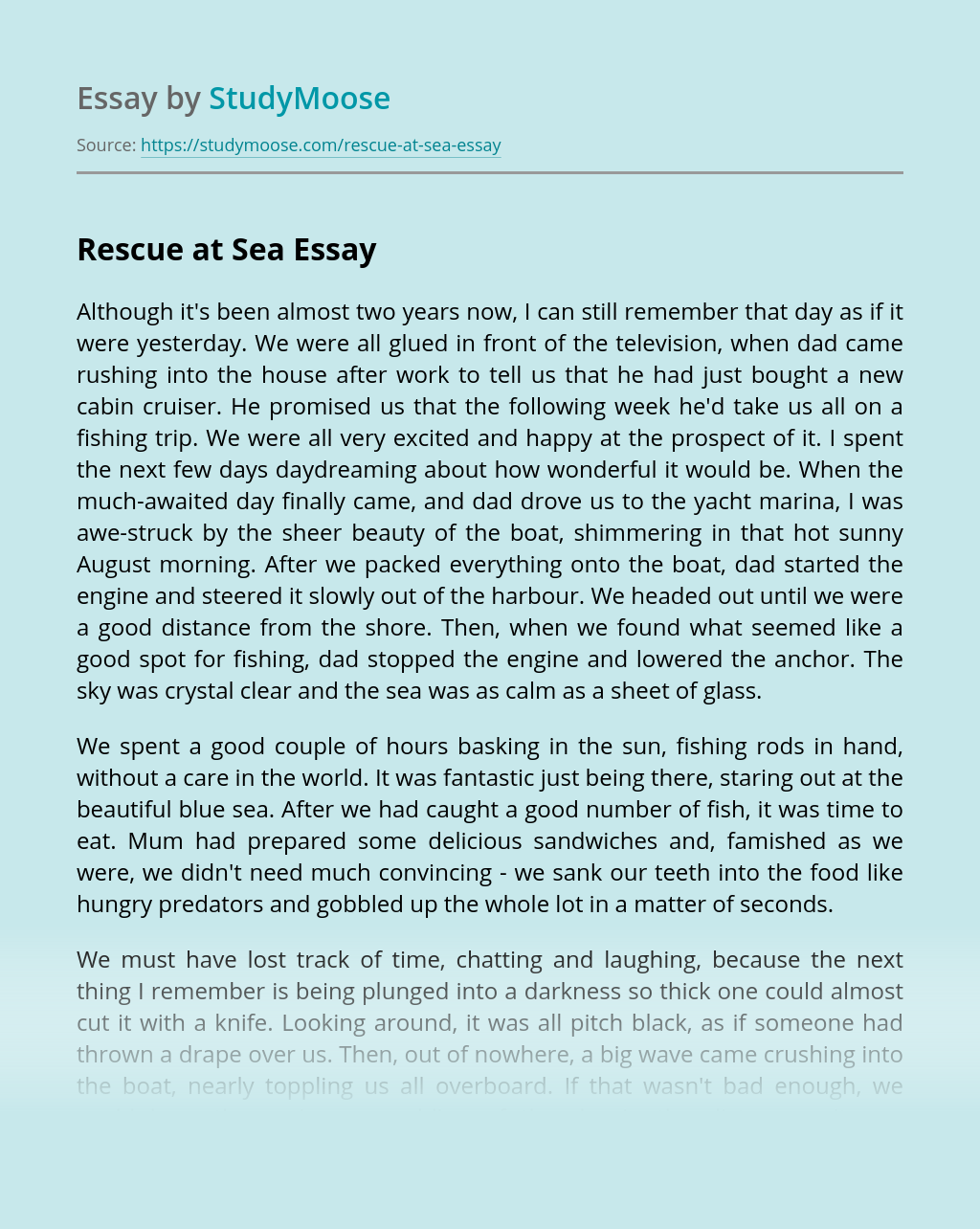 Turn in your highest-quality paper
Get a qualified writer to help you with
“ Rescue at Sea ”
Get high-quality paper
Helping students since 2015
Stay Safe, Stay Original