The Friend Who Saved My Life

It was a beautiful august day on a San Diego beach. The waves crashing, the sun shinning and Sam and I ready to go boogie boarding. We were so anxious because we had sat in a car for eight hours trying to get to San Diego. All we wanted to do was go swimming and get onto our new boogie boards that my mother had bought for the trip. But little did we know that that day would be a day that neither of us would ever forget.

Don't use plagiarized sources.
Get Your Custom Essay on The Friend Who Saved My Life Just from $13,9/Page

That day was the day my best friend Sam Hanivan helped saved my life on that beach in San Diego.

As we get out of the car we are so excited because it means our journey had finally ended and we were at our destination. The beach was amazing with its soft warm sand and the waves crashing in, perfect weather for boogie boarding. We weren’t used to beaches with soft sand because we grew up in northern California and most of the beaches were very rocky.

But we were ready to just run out into the water without anything other than our boogie boards, but, my mom wouldn’t let us until we put on some sun screen because me and Sam were very white. She didn’t want us to get badly burnt; little did we know that would be the least of our worries. But we obeyed her since she was the boss so we put our sunscreen on and got ready to get out into the wave. Finally we were able to go out into the water with our boogie boards and not a care in the world because we were 10 years old and all we wanted to do was have fun. We would ride the waves in and swim back out only to keep doing the same thing. But Sam and I never separated he was always there by my side and I wouldn’t leave him. If we took breaks and went in for snacks we did it together. We were out there all day just having the time of our lives; nothing could ruin this amazing adventure until the day took a turn for the worst.

The weather was starting to get windy and the waves were getting very choppy. We were still really far out into the water and exhausted from being out there all day but hell we weren’t going to let a little bad weather ruin our time. Soon after this the waves started turning into rip tides. Rip tides are when the wind and wavesclash together which creates a force stronger than any human swimmer can fight. Sam and I didn’t know that so we were fighting against the waves trying to get to the beach but the more we fought the more we were pulled out into the ocean. I was getting exhausted from fighting the waves and I asked Sam please don’t leave me I wont be able to make it into shore without you. I was too tired to keep fighting the waves until we hear a megaphone yelling “Don’t Fight The Waves, Swim Diagonally.” We listened to the lifeguards and started to swim diagonally rather than fight the waves head on. Sam right by my side never even going further than a arms length.

We were still extremely tired; we could see the lifeguards getting ready to swim out and save us but without Sam coaching me I would have given up a long time ago. His word were the only thing that kept me going and the fact that I knew he wasn’t going to leave me. I looked over at Sam and realized he was so tired also I knew that if I don’t fight harder neither of us would make it. That thought gave me a second wind and I was again ready to fight my way back to shore. The lifeguards were just about to come out to get us as the realized that we could make it. We finally get to the shore and sigh in relief, as we were triumphant. That day is a day I will never forget because not only did Sam save my life by staying with me and encouraging me the entire way into shore, but also it made me realized this kid is a TRUE friend. He stayed with me no matter what, he could have swum in and left me out there but he didn’t. Sam was truly my best friend and he showed that to me by sticking with me till the end. Sam and I haven’t really kept up over the years of middle school and high school and I to this day regret that.

But I truly do hope the best life anyone could imaging for him and I also hope that someday we will come back together to be best friends again because there is a saying “your only as good as your friends.” I hope to someday be half the friend Sam was to me he was and always will be my true best friend.

The Friend Who Saved My Life. (2016, Mar 04). Retrieved from https://studymoose.com/the-friend-who-saved-my-life-essay 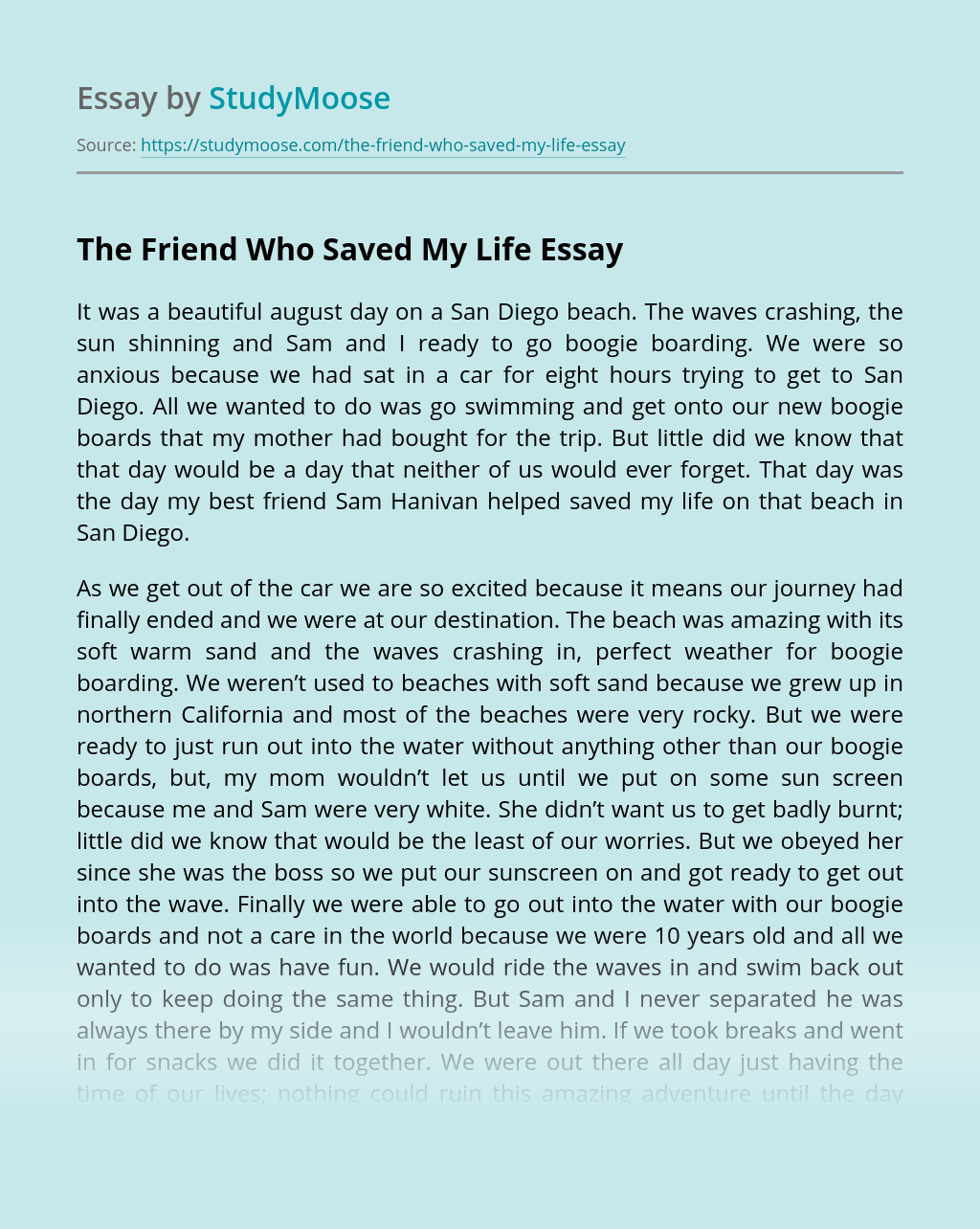 Today’s life has many difficulties and people are the victims, so they plan to make it easy as they canother. So they can reach a good position. They have more friends in the community since it is small. The village people always try to protect their traditional habits and culture. Life in the village has...

Toni Cade Bambara, born March 25, 1939 in New York City City; her mother was Helen Brent Henderson Cade. Bambara adopted that surname when she found it on a sketchbook her great-grandmother had. Bambara spent the very first 10 years of her life in Harlem, New York. In 1973, she published and essay in Redbook...

Challenges in life are obstacles that one has to surmount, to overcome in order to progress and to do so usually requires a display of admirable qualities such as courage and perseverance. Does challenges in life always bring out the best or the worst in a person? This is debatable as challenges can either make...

Most of the novels have their own characteristics and they are sometimes similar to each other. The two novels ‘A man told me the story of his life’ and ‘To earn the living’ have several similarities. For example, both characters presented in the two stories both feel the necessity to earn a living. This aspect...

Hole In My Life

“It is not what one does that is wrong, but what one becomes as a consequence of it “, which means the thing you do can turn you into something you’re not. It’s not the crime someone commits it’s if they change or have a positive effect on the consequence. Jack Gantos started hanging with...