Maslow's Hierarchy of Needs within Lord of the Flies

Abraham Maslow formulated a theory of a hierarchy of needs, stating that he believed that human beings are motivated by unsatisfied or incomplete needs. In his theory there are five levels of certain needs in which lower needs need to be satisfied before higher needs can be achieved. The five needs are physiological, safety, love, esteem, and self-actualization. Maslow’s Hierarchy of Needs applies to many of the characters in Lord of the Flies, such as Piggy, Ralph, and Jack, and shows how they are affected when their needs are unsatisfied.

Don't use plagiarized sources. Get your custom essay on
“ Maslow’s Hierarchy of Needs within Lord of the Flies ”
Get custom paper
NEW! smart matching with writer

The lowest and basic need of Maslow’s Hierarchy of Needs is physiological needs, which are the necessity of air, water, food, sleep, and shelter. Throughout the novel, the majority of the boys acquired all of their physiological needs. There were three shelters built of tree branches, logs, and leaves. The boys slept in the shelters at night for warmth and a sense of home. Many of the younger boys munched on the fruits they picked in the jungle and everyone ate roasted pig which Jack and his hunters slaughtered periodically.

The boys also filled up coconut shells with water and placed them under trees and in the shade of the jungle to be chilled and drank when necessary. Since the boys alleviated their physiological needs, they were able to think about other needs, such as safety.

The second need of Maslow’s Hierarchy of Needs is the necessity for safety, which is protection and maintaining wellbeing while creating stability in a chaotic world.

One of Ralph’s first instincts was to maintain safety by searching and exploring the island with Jack and Simon for anything or anyone who could possibly pose a threat to their wellbeing while inhabiting the island. Also, Piggy and Ralph find a conch in the water on the island. The conch was blown as a signal to let the other lost boys know where they were, which refers to Maslow’s need of safety because this would not have been done if the kids did not feel safe. If Ralph and Piggy felt that they were safe and protected, they would have kept quiet and to themselves and they would not have been found. Another way the boys gained the need of safety is by building the huts on the beach as a form of protection which acted like a house, and definitely made the younger and more immature boys feel much more secure.

Even though many jobs were completed to secure the boys safety, many of the little boys still felt unsafe, this resulted in a huge dilemma. One night during an assembly one of the boys told the story about how he saw a beast in the forest. Many of the younger boys are having nightmares about this story, and are watching their backs while in the forests. On page 36, Ralph says, “But there isn’t a beastie,” repeatedly but his attempts to remove the trepidation and fear within the littluns proved to be futile. Since almost all of the young boys were always afraid of a beast or a monster, their need of safety was never achieved, they were unable to reach other needs higher on Maslow’s Hierarchy of Needs, so their lives on the island were incomplete, and they all lived in fear and anxiety.

The third necessity of Maslow’s theory is the need of love and belongingness, or the acceptance of others and the need to be needed. Due to Piggy’s past of being ridiculed and mocked in his old school, his first impulse was to try and make friends and be accepted early on in the novel. As soon as Piggy ran into Ralph he asked him his name and tried to become friends with him. Ralph says to Piggy, “Get my clothes,” on page 14, which shows that Piggy is willing to be a servant to make a friend or acquaintance. It seems that Piggy had already fulfilled the first two needs, and now he wants to fit in with Ralph.

Another example is when Ralph blew the conch all of the other kids came and they had a meeting. “Signs of life were now visible on the beach. The sand, trembling beneath the heat haze, concealed many figures in its miles of length; boys were making their way toward the platform through the hot, dumb sand.” (18) All of the boys came to the meeting and participated in the meeting, which showed that they all wanted to belong. If they did not want to belong, they would have stayed off by themselves or not have joined in on the meeting. All of the main characters achieved this need, although Jack was unhappy with his role in the group and was trying to find ways of gaining more respect throughout the novel.

The fourth need of Maslow’s Hierarchy of Needs is esteem, which is the mastery of a task and also receiving attention and recognition from others, or the need for power. A prime example of this need being fulfilled is when Jack forms his own tribe and made him self the leader not only because he was power hungry, but because he could not stand the fact the Ralph was chosen chief and was getting all the attention. Jack also found something that he was skilled at. His skill was hunting. Jack used his skill and found it valuable to win over the other kids on the island to assemble a new group and make him the leader of it. After some time and much conflict Jack had every person on the island under his command or killed them. The only exception to this was Ralph who scarcely evaded a similar fate.

Piggy never achieves the goal of esteem because he is not appreciated for his intellect and wisdom which he offers the boys in times of need. Since Piggy never exceeded this need, his personality suffered and he has a very weak personality, and was easily bullied and pushed around. Simon, another main character, never achieved the need of esteem. Many of the boys thought Simon was unusual and secretive, and he is constantly ridiculed quietly, usually behind his back. For example, on page 74, “Ralph stirred uneasily. Simon sitting between the two twins and Piggy, wiped his mouth and shoved his piece of meat over the rocks to Piggy, who grabbed it. The twins giggled and Simon lowered his head in shame.” This passage shows that even when Simon was doing good deeds he was not congratulated and did not receive recognition for many of his unselfish actions. Neither Simon nor Piggy ever achieved the need for esteem, and coincidentally, they were also outcasts and were the only two boys murdered on the island.

The fifth and final need is the need for self-actualization, which is, “the desire to become more and more what one is, to become everything that is capable of becoming.” Self-actualization did not directly occur within the boys on the island, but Ralph seemed to become very close. “Ralph looked at him dumbly. For a moment he had a fleeting picture of the strange glamour that had once invested the beaches. But the island was scorched up like dead wood-Simon was dead-and Jack had…. The tears began to flow and sobs shook him. He gave himself up to them now for the first time on the island; great shuddering spasms of grief that seemed to wrench his whole body. His voice rose under the black smoke before the burning wreckage if the island; and infected by that emotion, the other little boys began to shake and sob too.

And in the middle of them, with filthy body, matted hair, unwiped nose, Ralph wept fir the end of innocence, the darkness of a man’s heart, and the fall through the air of the true, wise friend called piggy.” (202) This significant passage shows Ralph breaking down and showing his true emotions and what he feels inside. Ralph realizes he had the power to make the boys stay on the island a much less violent and much more enjoyable, but he did not use his power correctly and he was overturned, which lead to the death of two innocent children. This is a type of self-actualization because Ralph realized what he could have been, said, and done. Ralph realized that he did not fulfill his unique potential and could have been all he could be on the island but did not take advantage of this opportunity.

Maslow’s Hierarchy of Needs best demonstrates what occurred on the island in Lord of the Flies. It also proves why many of the acted the way they did. In Lord of the Flies, chaos and violence was extremely relevant within the group of boys not only because of differing values and conflicting views, but also because many of the boys needs were being neglected during there stay on the island.

Maslow's Hierarchy of Needs within Lord of the Flies. (2016, Jul 16). Retrieved from http://studymoose.com/maslows-hierarchy-of-needs-within-lord-of-the-flies-essay 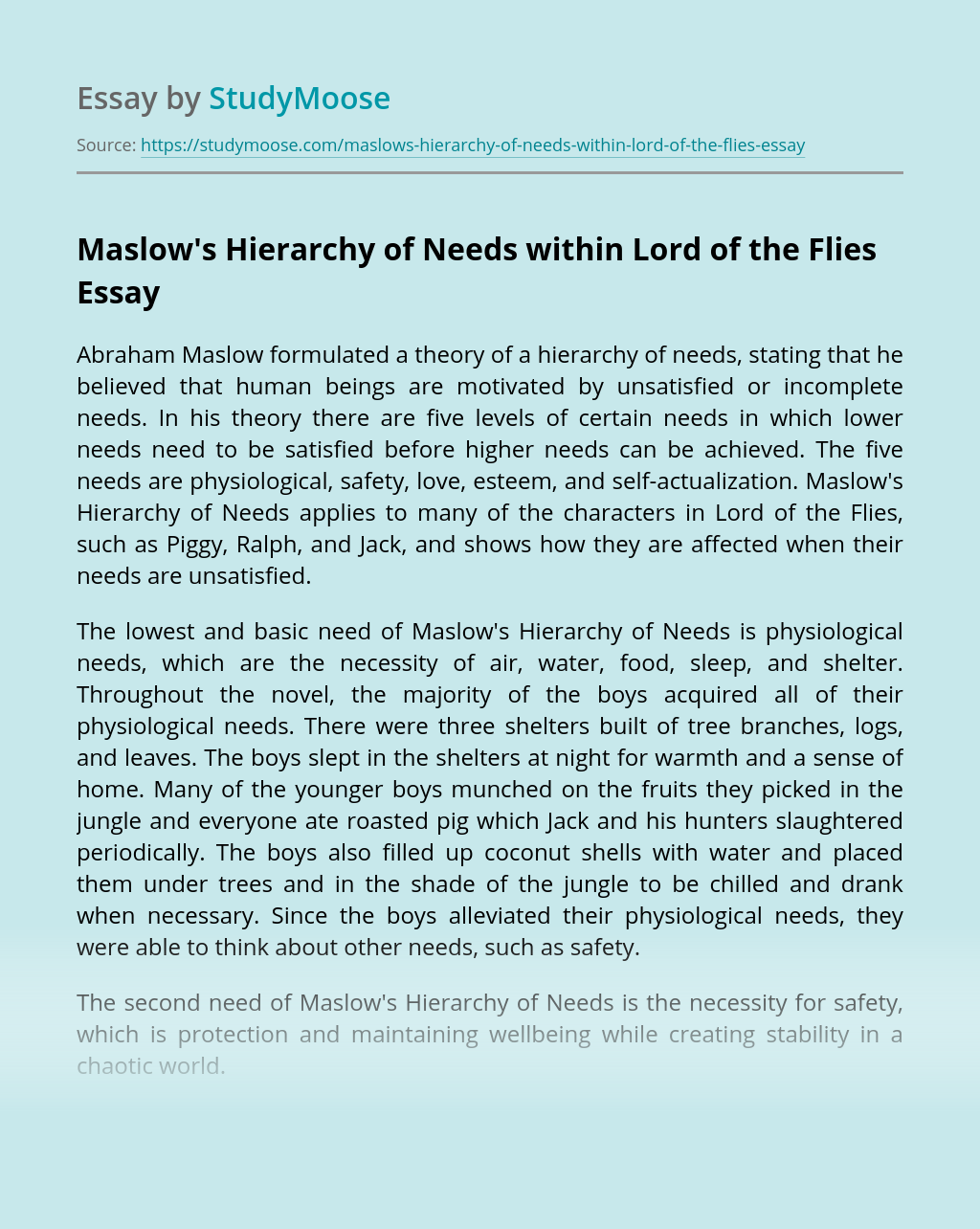