Human Nature in Lord of the Flies - Essay

Authors often use their pieces of work and different literary elements to explain their philosophy on certain “ways of life” that humans possess. In Lord of the Flies, William Golding shows his view on human nature with his intense plotline of young boys getting stranded on a deserted island, trying to survive by themselves with limited resources, and then over time losing their sense of civilization. In the beginning the boys combine themselves under one, but as the story progresses, the boys create different opinions on survival thus creating divides in the group.

Turn in your highest-quality paper
Get a qualified writer to help you with
“ Human Nature in Lord of the Flies – Essay ”
Get high-quality paper
NEW! AI matching with writers

This leads to several different altercations where the boys turn to behaviors that are barbaric. Throughout the book, Golding’s use of imagery portrayed the characters as cruel. It is through the description of their behaviors that Golding depicts a pessimistic view of human nature. Across the text, the author has several examples showing his pessimistic views, but above all the one factor that shows the brutality of mankind is Jack’s constant behavior towards Piggy.

Golding writes in one disagreement, “He took a step, and able at last to hit someone, stuck his fist into Piggy’s stomach.

Piggy sat down with a grunt” (Golding, 71). The two main opponents in this argument were Ralph and Jack, but yet when Piggy made one statement agreeing with Ralph, he got punched in his stomach which caused him to smash his glasses. This violence is continued throughout the book, and it is directed towards Piggy by the others who have forgotten how to respect one another.

This quote illustrates Golding’s pessimistic views by describing the many ways humans lose their sense of right and wrong.

Over time, Jack’s usual behavior becomes nasty and vicious which holds against the humane ways of the world now, and rather dates back to the natural nature of animals. The violence that Jack expresses from time to time also shows the cynical character he has turned into without humanity surrounding him. A second example pertaining to Golding’s view on human nature and the negativity it has is the way the littluns are treated in this book. In the novel, he explains, “Roger stooped, picked up a stone, aimed, and threw it at Henry” (Golding, 62).

In other words, Roger an older boy decides to physically try and hurt a younger child for no reason. Golding tries to show that there must be something wrong with Roger to enjoy torturing Henry. His depiction of human nature is shown through the mental images the reader gets of the terror Henry is put through. Roger was determined to scare the little boy into tears without a valid reason of doing so, except for the fact that he had no discipline and was allowed to be so unruly. It shows that without the laws and rules of the society, the boys were acting like wilds animals.

The last act of cruelty that depicts the pessimistic views of human nature was in the end when the boys were stripped of their humane qualities. Robert mutters, “He didn’t say. He got angry and made us tie Wilfred up” (Golding, 159). Jack had made the boys tie Wilfred up for no reason, and was planning to beat him up in front of all the other boys. He was going to use him as a toy and play with his life just because he felt like it. Jack’s cruel behavior towards Wilfred never had a reason and the other boys just let it go because they were scared for their own lives.

The civilized thought of having value for other people’s life was absent from these boys’ mind, and rather the barbaric thought of inflicting pain was taking over. This example proves Golding’s view on human nature is pessimistic because he shows that at the core, these boys are evil and malevolent. Due to all of these examples of cruelty, the author suggests that human nature in fact is pessimistic and negative. In the novel, the good that society usually pushes upon the boys is not present and therefore the natural traits of humans are shown. The boys retrogress back into time, and become very brutal.

With no manners or discipline, the boys are reacting in non positive ways creating a domino effect of bad events though out the whole book, until the end when they are finally rescued. Golding portrays a very melancholy look on humans and their innate behavior as he completely breaks down certain traits humans have worked for ages to build. As they continue to bring cruelty into their world, the boy lose civilization and the sugar coating it puts on mankind’s natural behavior. Golding breaks down these boys and shows the true core of human nature.

Human Nature in Lord of the Flies - Essay. (2016, Nov 13). Retrieved from http://studymoose.com/human-nature-in-lord-of-the-flies-essay 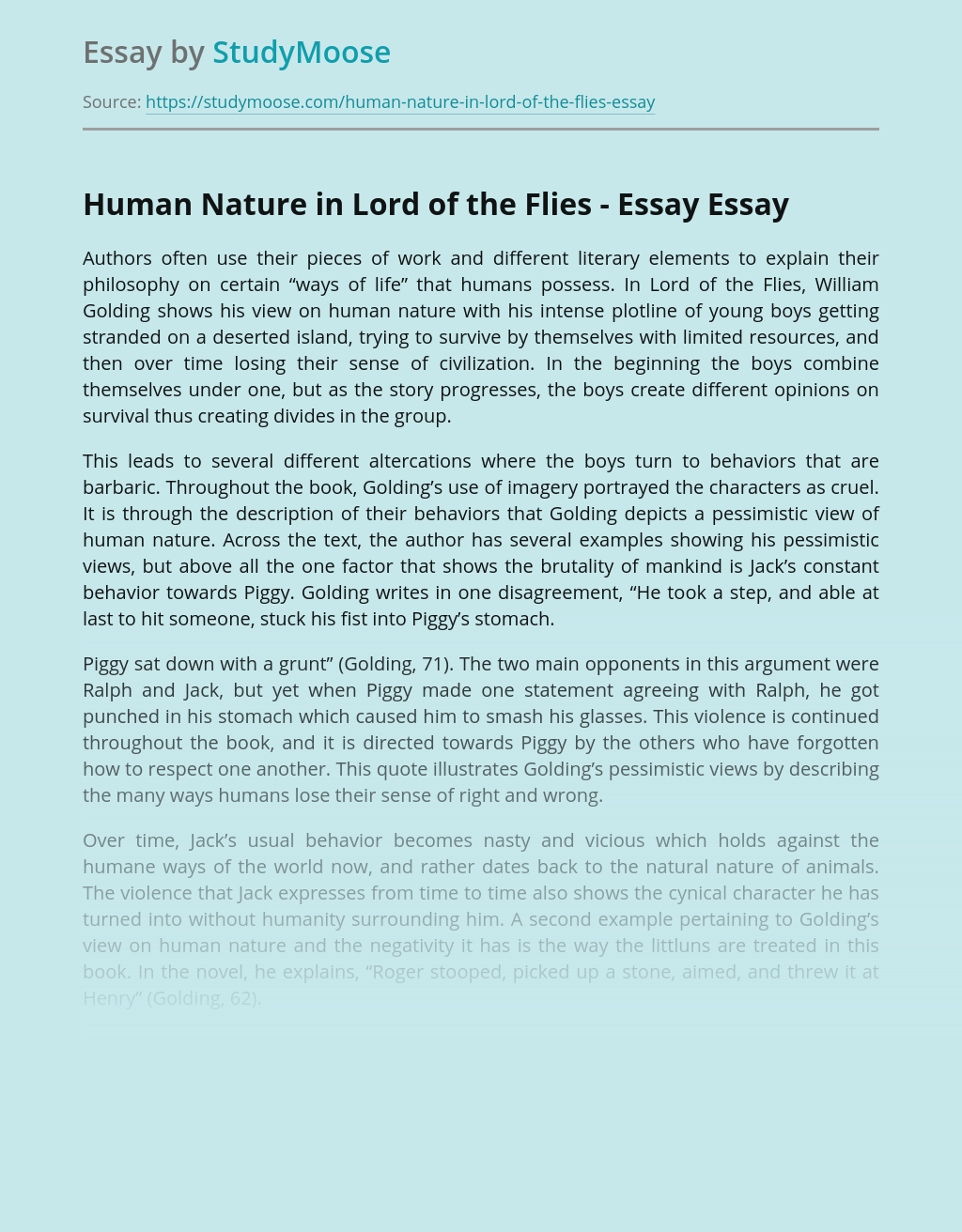 Turn in your highest-quality paper
Get a qualified writer to help you with
“ Human Nature in Lord of the Flies – Essay ”
Get high-quality paper
Helping students since 2015
Stay Safe, Stay Original