Lord of the Flies: The Evil of Human Nature

“However Simon thought of the beast, there rose before his inward sight the picture of a human at once heroic and sick(Golding 128). This quote from William Goldings novel, Lord of the Flies, effectively suggests that human beings are evil; which is also the main theme of the novel.

In the novel, the major characters at the ending reinforce Goldings negative view of human nature.

Golding provides his view of human nature very early in the novel. The island on which the boys land is described as a paradise with a variety of flora and fauna.

Don't use plagiarized sources. Get your custom essay on
“ Lord of the Flies: The Evil of Human Nature ”
Get custom paper
NEW! smart matching with writer

Upon the boys landing, the tube carrying the boys causes a scar on the island. The intensity of the destruction caused by the scar is described: All round him the long scar smashed into the jungle was a bath of heat(Golding 11). However, the destruction does not stop there. Later, the boys burn down a large part of the island as a result of their carelessness.

Here, Golding shows that humans cause destruction even if they did not mean to. He is almost suggesting that causing destruction is second nature to us humans. At the end of the novel, the destruction comes full circle when Jacks tribe burns down the entire island. The presence of the boys has completely changed the island from a beautiful paradise to a charred wreckage.

Goldings pessimistic view of human nature is further expanded with the issue of hunting. As the novel progresses, Jacks level of obsession with hunting continues to escalate until the very end of the novel. It is interesting to note that although the island has an abundance of fruits and the boys can easily catch fish and crabs at the beach, Jack insists on hunting to get meat. Later on, he enjoys hunting as if it were a sport:His mind was crowded with memories; memories of the knowledge that had come to them when they had outwitted a living thing, imposed their will upon it, taken away its life like a satisfying drink(Golding 88).

Jack hunts not with the sole intention to get meat, but he particularly enjoy exercising power over living creatures while hunting. This shows how much Jack enjoys having power; the power to control other beings. Throughout the novel, Jack does everything he can to gain the respect of the boys; to gain support for power. Later when he most of the boys join his tribe, Jack takes one last step to secure his position as chief of his tribe. He goes as far as to order his tribe to hunt and kill Ralph to eliminate the last threat to his position. Here, we can see that Jack has moved from hunting pigs to hunting humans. Thus, this shows how savage and evil man can be as he hunts even his own kin. Besides, these examples also show that humans have an unquenchable thirst for power that if not controlled, will blind us and take over our soul.

In the novel, Golding uses Jack and his tribe to illustrate the effects of complete freedom to man. After Jacks tribe is formed, the members are no longer referred to as boys but as savages with Jack as their Chief. This is a direct reference to the boys regression into a primitive state of being. Jacks tribe also performs several primitive practices that are usually attributed as savage. First of all, they paint their faces and bodies to conceal themselves while hunting pigs. Next, they perform brutal killing of pigs:Roger found a lodgment point and began to push till he was leaning with his whole weight. The spear moved forward inch by inch and the terrifying squealing became a high-pitched scream. Then Jack found the throat and the hot blood spouted over his hands(Golding 168,169).

Last of all, they give an offering, the pigs head, to the beast hoping it would not harm them. Thus, this shows that the boys do not understand the true nature of the beast. Their situation is similar to primitive man, who gave offerings to gods and idols to protect their own well-being from natural disasters they did not understand. It is during the presentation of the offering that Jack said: Sharpen a stick at both ends (Golding 169). Obediently, Roger sharpens a stick and Jack skewers the pigs head on one end of the stick and places the other into the ground. This statement is repeated again at the end of the novel.

When Ralph asks Samneric of what Jacks tribe plan to with him once he was captured one of them replied, Roger sharpened a stick at both ends(Golding234). Although Ralph would hardly understand what the phrase means, the terrible truth becomes clear to the reader. Jacks tribe plans to behead Ralph and skewer his head on a stick sharpened at both ends as another offering to the beast. It is, by far, the most brutal display of human savagery. Without the eye of watchful adults, Jack and his tribe are uncontrollable; and Jack as their leader, has absolute power.

Golding has written Lord of the Flies based on his experience in war. He realizes that war is the greatest act of human evil, for it takes the lives of innocent people and causes nothing but destruction. Therefore, it is fitting for Golding to highlight the effects of war in the novel to reinforce his pessimistic view of human nature. At the end of the novel, Golding leaves the reader with an image of a war ship, which is one of the many traces of war in the novel. If the reader examines the opening of the story, there are references to a war going on in the world, such as Piggys mention of the atomic bomb: Not them. Didnt you hear what the pilot said? About the atomic bomb? Theyre all dead(Golding 20).

The reader discovers that the boys are stranded on the island because of the war. Besides that, another trace of the war is the dead parachutist. The boys mistake the dead parachutist for the beast. Ironically, the dead parachutist is the beast in the sense that he is connected to the war going on in the world outside and the beast is attributed to the evil in human nature. Even the boys have their very own war on the island. Therefore, the island could represent a microcosm of the outside world. Now, we return to the image of the war ship. The arrival of the ship allows the boys to be rescued. However, the ship only serves to remind the reader that although the boys are rescued, they are taken back to a war-torn world. After experiencing one war, the boys are being taken to another. The circle of destruction continues.

To sum everything up, Golding effectively uses the main characters, especially at the ending, to prove that humans are more evil than good. The last page of the novel has one last scene of Ralph which summarizes the main themes of the novel. From his experience on the island, he is no longer an innocent child as he has been exposed to the evil nature of human beings and human savagery:And in the middle of them, with filthy body, matted hair, and unwiped nose, Ralph wept for the end of innocence, the darkness of mans heart, and the fall through the air of the true, wise friend called Piggy(Golding 248).

Golding, William. Lord of the Flies. London: Faber and Faber, 1996.

Lord of the Flies: The Evil of Human Nature. (2016, Jul 20). Retrieved from https://studymoose.com/lord-of-the-flies-the-evil-of-human-nature-essay 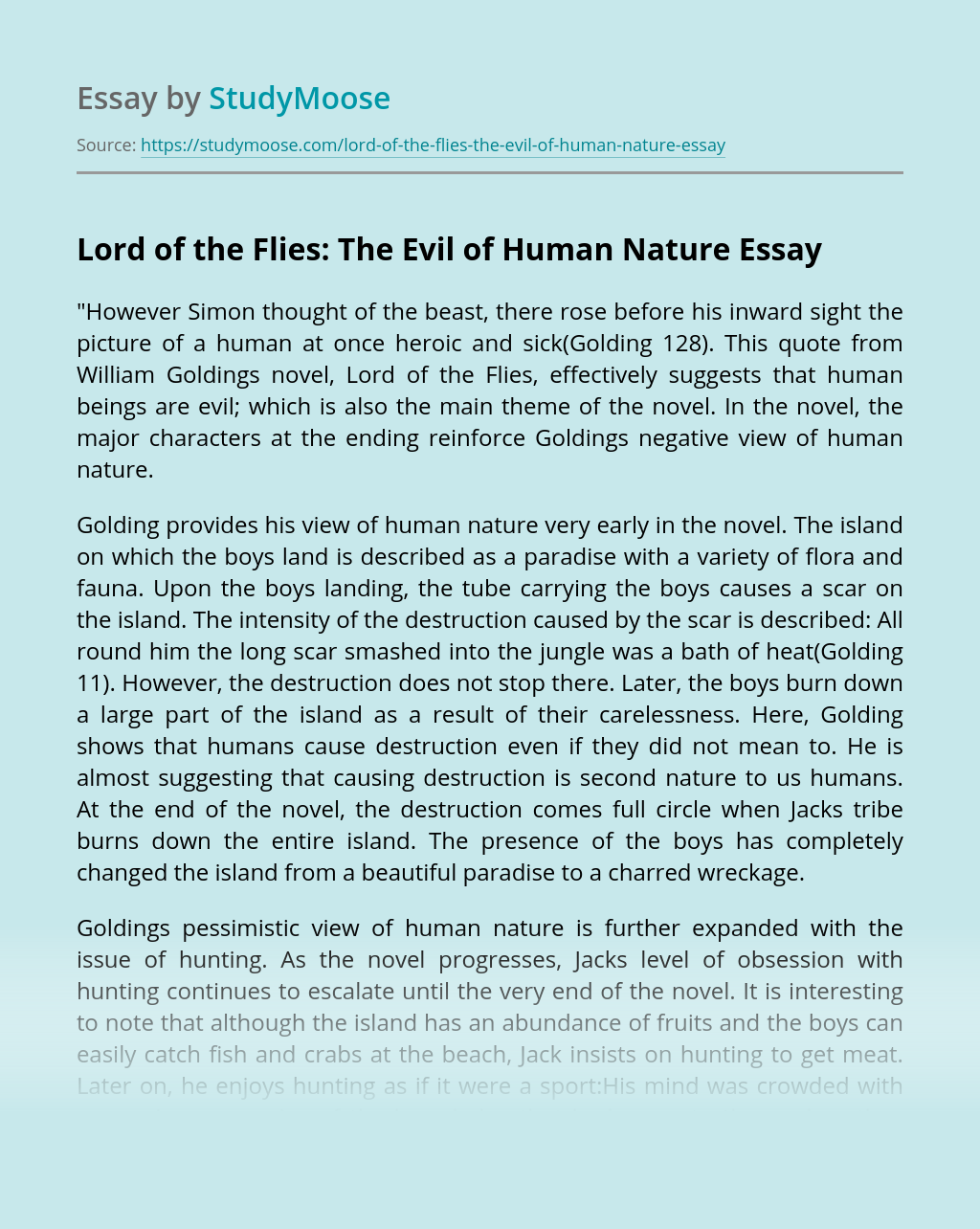