Censorship of Lord of the Flies

Lord of the Flies, by William Golding, is a novel about a group of school boys, whose ages range from six to twelve years old. The boys’ plane crashes on a nameless, uninhabited island in the middle of the ocean. At first the boys struggle to get along, but after they choose a leader the boys begin get along. The leader, Ralph, is chosen because he found a conch shell which he blew into and all of the boys followed the sound of the conch and are reunited.

Turn in your highest-quality paper
Get a qualified writer to help you with
“ Censorship of Lord of the Flies ”
Get high-quality paper
NEW! AI matching with writer

Jack is another main character in the book. He is the antagonist to Ralph in the way that Jack disagrees with Ralph a lot. Jack and Ralph fight throughout much of the book, however they do agree on the need for food and a fire. The fire was Ralph’s idea and he wants someone to tend the fire all the times; Jack volunteers himself and the rest of his choir. But, Jack also volunteers to be the hunting group.

Jack spends all of his time hunting and the fire goes out. Ralph is livid with Jack. Jack tells Ralph that he will catch a wild boar, and then he won’t be so mad. When Jack finally does catch the boar, everyone goes mad with excitement, for all of the boys are starving.

The book describes the boys as becoming savages at the sight of the cooking pig. Also, Jack spears the boar’s head and puts it on a stake. This is what the lord of the flies is.

This is a direct connection to the title by which is means that the “monster” that had been scaring them was really inside of them the whole time. Jack later mistakes Simon for the beast and he (Jack) and many of the other boys chase down Simon and kill him. Over, the next few days Ralph is opposed to Jack because Jack wants to be leader of the group. Jack orders hi¬¬¬¬¬¬¬-s “men” to kill Ralph. Ralph flees through the woods and lands on the beach and looks up into the face of a coastguardsman. Ralph is the protagonist and a major character. However, Jack is a major character and the antagonist in the book. The theme in this book is civilization vs. savagery. There are two competing inclinations that humans are either naturally good or naturally bad. This book suggests that man is naturally bad.

Symbols in the book include the conch shell and how it shows power. Golding’s novel: Lord of the Flies has been challenged and banned in high schools because of derogatory language, profanity and the theme of the book. Although valid observations, these are not sufficient reasons to ban a book as good as this. To begin, Lord of the Flies has been banned in schools due to its poor language. Lord of the Flies was challenged at the Olney, Texas Independent School District. (ALA) One of the passages that the school is referring to is, “Ralph waved the conch. ‘“Shut up! Wait! Listen!”’ (Golding 38). Piggy tried to talk over Ralph, but Ralph would have none of it. He waved the conch, which is a symbol of power throughout the book, in Piggy’s face. Shut up” is simply a forceful way to tell someone to be quiet. It is often used in under duress situations where there is lack of a better word. Ralph was sort of boasting about how he had all the power and Piggy didn’t have any. Another instance where bad language is present is when the boys kill the boar, Roger helps to attack Simon. The boys notice that Roger has speared the boar.

The boys begin to chuckle as Roger takes his spear out of the boar’s rear. Roger pulls the spear out and says, “Right up her ass!” (135). This gave a great uproar from the sea of onlookers. Many children may have thought these phrases to be bad; however to high school students, these are not bad. “Shut up” is simply a forceful way to tell someone to be quiet. It is often used in under duress situations where there is lack of a better word. While this is not so bad, “right up her ass” is a little more vulgar. There is never a time that a high school student should use this phrase; however it must be understood that high school students can be very immature and they see things like this all the time. If a school wants to challenge a book, they should consult students and see what they think on the matter.

Bad language isn’t the only reason this book has been challenged, the theme of this book is in question to some people. Another reason that the book is banned is because of the theme that it is defamatory towards human nature. Lord of the Flies was banned at Owen, North Carolina. High School in 1981becasue it is “demoralizing inasmuch as it implies that man is little more than an animal”(ALA).

Many people in North Carolina and other places throughout the U.S. found this book very offensive in the fact that it exploited man’s natural way of thinking. Some people believe that evil is present in all humans, while others cannot begin to fathom the idea. A philosopher by the name of Thomas Hobbes was famous for this idea that man is truly evil at heart. As Hobbes said, “The life of man: solitary, poor, nasty, brutish, and short” (Lloyd). Hobbes’ philosophy on life and man, offends many people, especially those in North Carolina. Many people believe that man is good at heart.

Lastly, profanity in Lord of the Flies is seen by many as a big deal. While people stretch it, there is a passage at the end of the book where it is seen as raping of a woman, when in reality, the boys are just killing a pig. People take it too far and possibly have tried to get this wonderful book banned simply due to the fact that they do not like it. They try and stretch the truth and get people to not like the book either.

Lord of the Flies is banned in several places throughout America. The first amendment of the Constitution of the United States says: no to censorship. Censorship is the act of banning books or magazines based on their content. This is almost illegal. The lessons that this book teaches us are far more important than the few instances where bad language or profanity is used. Some high schools find the bad language, profanity and the theme of the book to be inappropriate for high school students to read while many others find the material inspiring and enlightening.

Censorship of Lord of the Flies. (2016, Oct 17). Retrieved from https://studymoose.com/censorship-of-lord-of-the-flies-essay 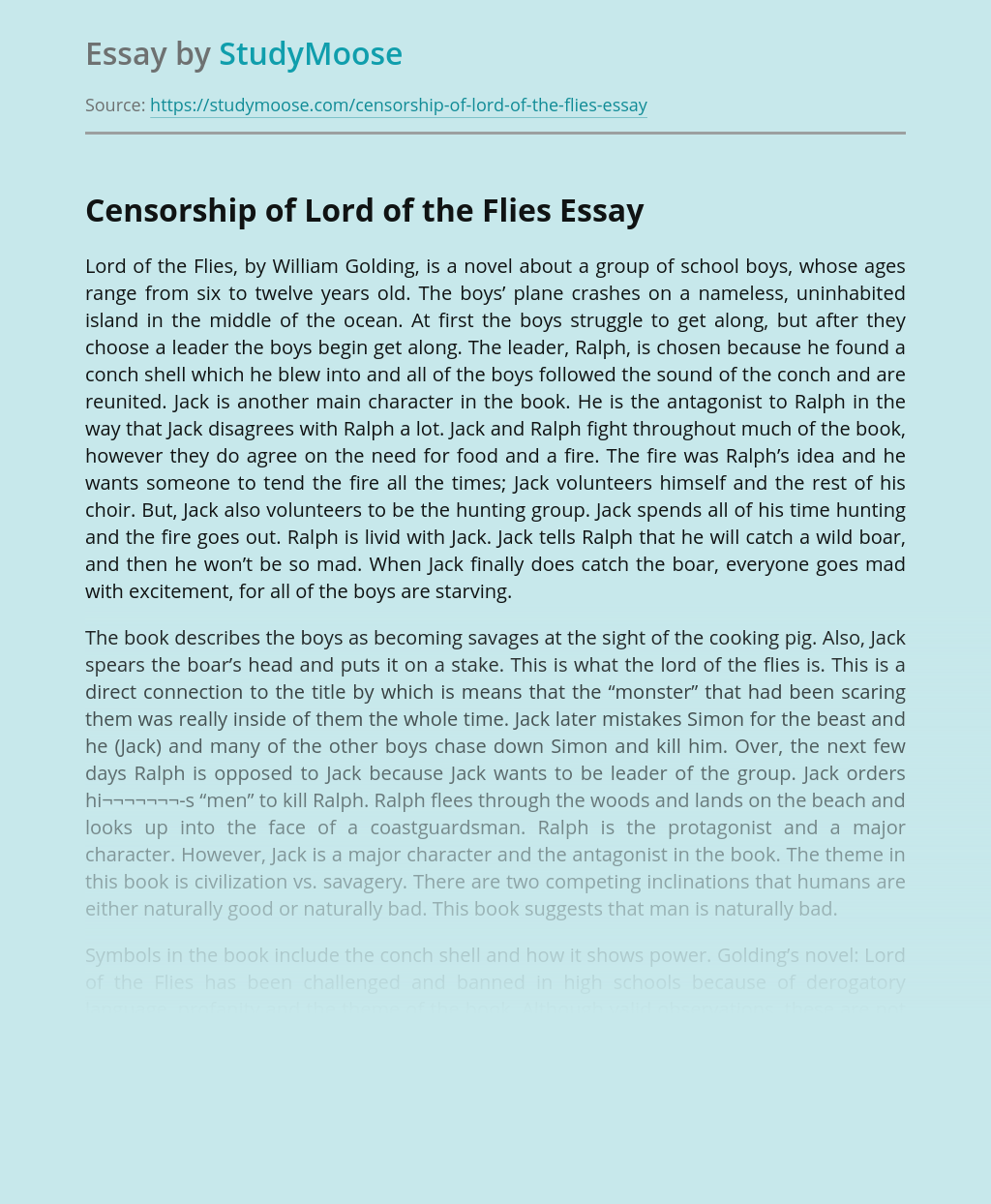 Turn in your highest-quality paper
Get a qualified writer to help you with
“ Censorship of Lord of the Flies ”
Get high-quality paper
Helping students since 2015
Stay Safe, Stay Original