Lord of the Flies: Civilization vs. Savagery

Civilization vs. Savagery
William Golding’s, Lord of the Flies is a novel that displays the power and importance of the rules of civilization and its role in preventing humans from following their natural inclination toward savagery. This novel displays how the rules of civilization are overcome by savagery when rules and authority get displaced, and savagery starts to become inevitable. When the boys were first ‘placed’ on the island it was the boy’s original instinct to be civil and just.

Don't use plagiarized sources. Get your custom essay on
“ Lord of the Flies: Civilization vs. Savagery ”
Get custom paper
NEW! smart matching with writer

The boys voted on a leader, Ralph, and established rules and jobs for the boys to do and follow. This civility between the boys can be seen deteriorating throughout the course of the six hunts. Jack, who was obsessed with hunting pigs to prove himself as a hunter, is the leader of this deterioration. This deterioration started first when the three of the boys were on an expedition to search the island for any signs of other people. The three boys came across a piglet stuck in the brush but Jack froze “because the enormity of the knife descending and cutting into living flesh; because of the unbearable blood” (Lord of the Flies, page 29).

Jack was scared of the idea of killing and spilling blood of a living animal. This action shows that Jack was still held back by the rules of civilization.

This close call is what started to fuel Jacks obsession to hunt to kill. After Jack killed his first pig, and realized that he can kill without any negative consequences, he brutally killed a mother sow with piglets.

He then cut the head off and placed it on a stick that was sharpened at both ends as a sacrifice to the beast. This shows Jacks savage obsession to kill pigs was beginning to take over, and his fear of blood was no more. This brutal kill was savage and reckless. Jack became so confident that he can kill anything, that it lead him to want to hurt a human. Jack ended up becoming so savage that he hunted Ralph. This was when almost all of the rules that held Jack back from killing had left him and he made up his own rules. The changing effectiveness of the conch and its ability to govern over the boys is another example that displays the deterioration of the rules of civilization. The conch was first the most important item and symbol of authority that the boys had on the island.

The conch was used to call meetings and govern over the boys. But, eventually over time people like Jack started to ignore it and break the rules. He and other boys faulted away and the conch became useless “And I’ve got the conch- ‘You haven’t got it with you,’ said Jack sneering. ‘You left it behind. See, clever?- And the conch doesn’t count on this side of the island-“ (Lord of the Flies, page 166). The conch eventually is destroyed, along with Piggy killed, and the last symbol of authority over the boys is vanished. The destruction of the conch symbolizes the final loss of authority Ralph has and the final event that led Jack to be overcome fully by savagery.

The last example of the deterioration of the rules of civilization is the boy’s fear of the great beast and how they began to offer sacrifices to the beast. Throughout the novel, the beasts caused a great amount of fear within the boys. The fear started within littleuns being afraid of the dark and many other objects on the island. The fear began in the big-uns when Sam and Eric claim to be chased by a flying beast. This fear kept the boys from having a fire on mountain and gave some of the littleuns nightmares. This fear also made Jack give offerings to the beast, a pig’s head. This gruesome act had been believed to work so when the time came Jack wanted to put Ralph’s head on a stick to. This savagery is what lead to the final conflict with Ralph and Jack as Ralph held on to the last bit of goodness on the island, his life.

In conclusion the deterioration of the rules of civilization and its role in preventing humans from following their natural inclination toward savagery can be seen through these three examples: the six hunts, the loss of effectiveness of the conch, and the drastic actions caused by fear.

Lord of the Flies: Civilization vs. Savagery. (2016, Mar 24). Retrieved from https://studymoose.com/lord-of-the-flies-civilization-vs-savagery-essay 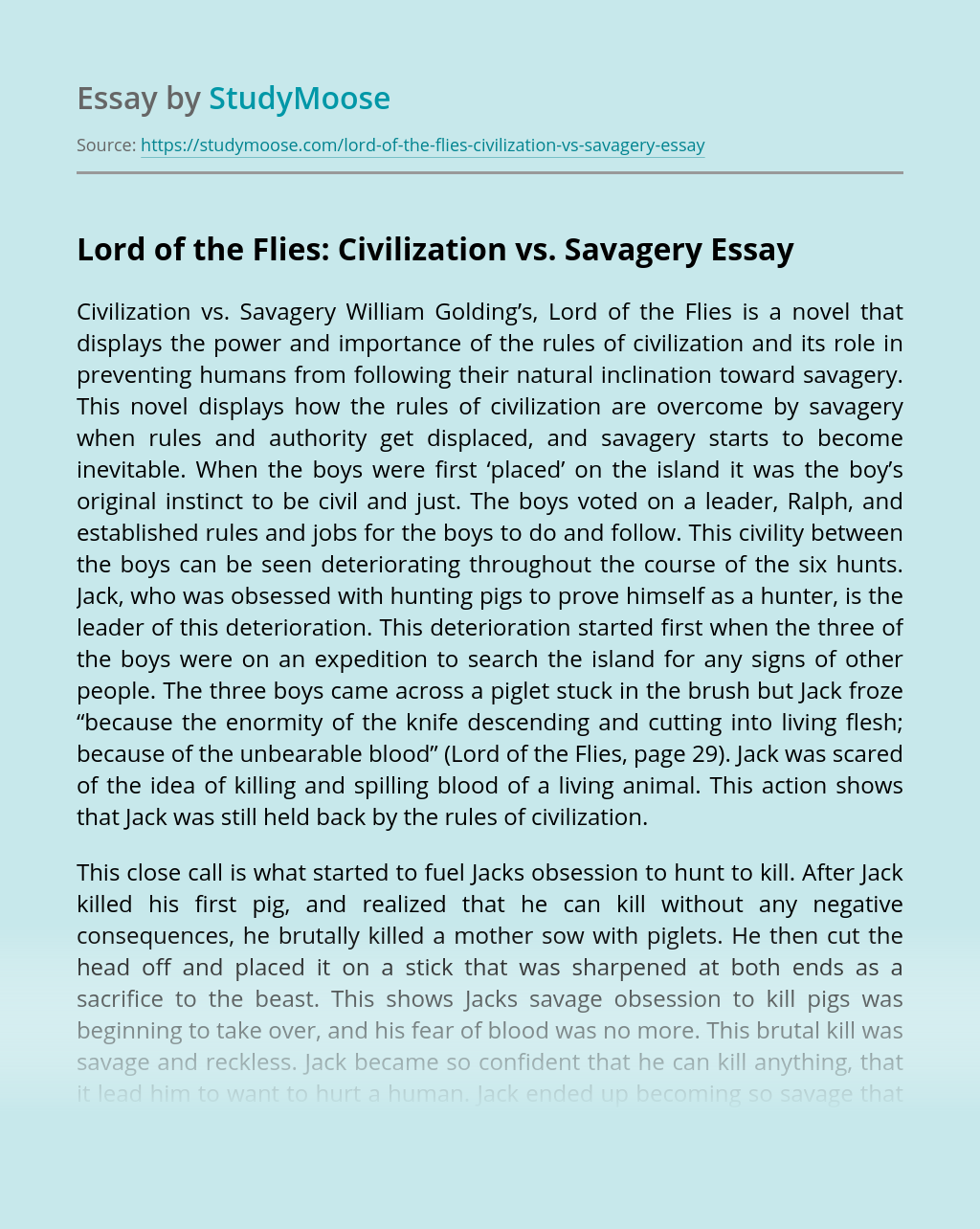