The descent into savagery in Lord Of The Flies

In lord of the flies there is a traceable descent from civilisation into savagery. It starts with rules being ignored and cruelty towards unfortunate members of the group and ends with death and the burning of the island. In the beginning the boys are very civilised jack marches hi boys around the island and a democracy is formed when Ralph is elected to be chief and jack agree to have ‘rules, lots of rules and anyone who disobeys will be punished.

Don't use plagiarized sources.
Get Your Custom Essay on The descent into savagery in Lord Of The Flies Just from $13,9/Page

’ this already shows his willingness to hurt and punish but also shows that he believes that rules should be made and obeyed.

This system works until Jack realises that he is not above these rules and when not given he conch he shouts ‘bollocks to he rules!’ he is already defying the rules and probably inspires others to do the same. He shows that if he didn’t make the rules or he doesn’t agree with them then they are stupid and he doesn’t have to follow them.

This is a key moment in the descent because it is showing jacks true and savage side, which is encouragement for the others to do the same.

Another key moment in the book is when roger is throwing stones at Percival and he misses purposefully because he felt guilt this shows that although he no longer as to be worried about being punished he retains the conscience that civilisation has given him. Golding describes it as a 1m circle around him that he dare not enter’. But we later see that the longer he lives on the island the more his conscience fades until he will quite happily beat and kill others without question. This behaviour is associated with soldiers who are ordered to do it but he is not a soldier and when throwing stones he feels guilt and will not hit the boy but will eventually be the one who pushes a boulder onto piggy as a kind of symbol that he has lost his conscience.

When Simon is killed the boys are described as ‘one organism’ in their dance with this in mind we can see that the boys probably just reacted to the ‘thing in the forest’ as being the beast but they did have enough time to realise that it was Simon not a beast. However we cannot completely forget that there was a storm and it was dark but how they failed to notice the difference between a small boy and a beast we can only guess at, but one of them must have had an idea that it was in fact Simon not a beast from the top of the mountain. Only Ralph seems o show remorse or sadness at Simon’s death saying “we killed him” and piggy seems to want him to forget about it and protect him and the ‘littleuns’.

When piggy is killed jack is said to have ‘ thrown a spear with full intent of killing at Ralph’ there was no remorse and he doesn’t seem to realise that what he did was wrong and he shouts at Ralph ‘see they do what I tell them to do.’ As a way of showing Ralph that he no longer has any control or power it all belongs to him. And comments on the fact that he now doesn’t have a tribe because the conch a symbol of order and democracy has been destroyed along with the knowledge and reasoning of Piggy. Piggy’s death is written with no sense of decency and it is treated like the killing of a pig or any other animal that does not really matter to the boys but to some even the killing of the pig is deemed to be cruel and inhuman. The death of Piggy is really the mark where civilisation ends in the book and savagery is now the driving force on the island. As soon after we hear of Wilfred being whipped for no apparent reason.

Finally the chase where Ralph is hunted like a pig across the entire island is a final act of savagery and resembles Adolph Hitler’s persecution and removal of all threatening people that could oppose him for power. The chase throughout the island and stopping at nothing to destroy his enemies shows a kind of madness, which we often see in dictatorships.

We can see this chase as a way of revenge on Ralph for becoming chief and the way of ‘cleansing’ the island of anything Ralph had anything to do with. But he fails to realise that by burning the island he is sealing the others to death as he has destroyed all of his food sources and killed the pigs as pointed out by Ralph who says “the fools don’t they realise they’ve burnt the fruit trees what will they eat tomorrow?” Now without these they would not live for long before they would die of starvation. Luckily for him the navy saw the fire, which is ironically Ralph’s idea of getting attention.

The descent into savagery can therefore be traced right to the beginning of the book with the jealousy of Jack and the unwillingness to obey rules shown by Jack. To the eventual loss of all rules and democracy and the rise of a dictator and the systematic destruction of all that oppose him.

The descent into savagery in Lord Of The Flies. (2017, Sep 24). Retrieved from https://studymoose.com/the-descent-into-savagery-in-lord-of-the-flies-essay 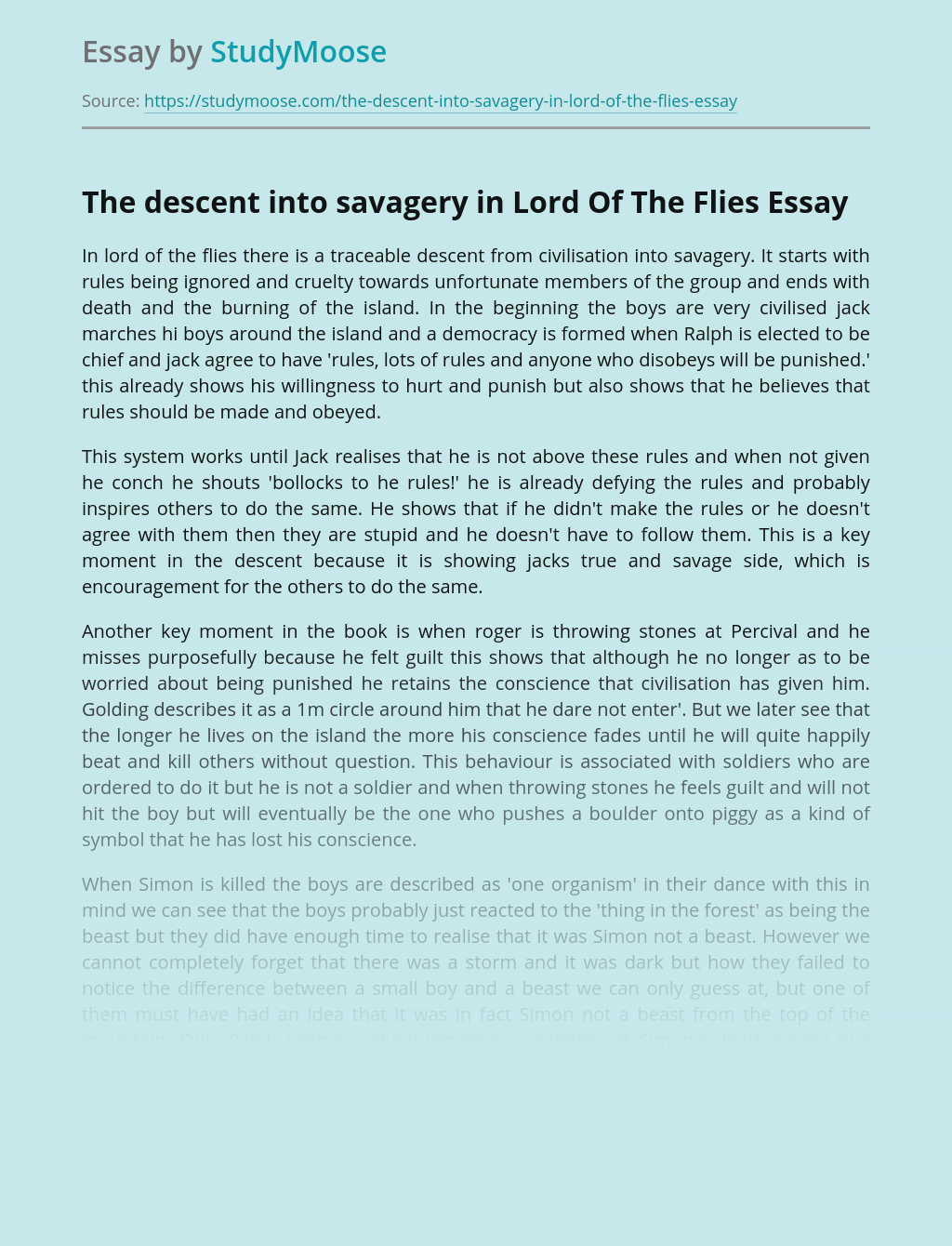 Through out this novel, a lot of tragic and powerful events transpire. They make the reader think quite a bit on what they have just read and after this, you tend to react. These events and occurrences are the main idea behind the story and they continue to constantly grab your attention and you keep...

Personality of Character in The Harness

Characters are what draw the reader into a work of fiction. Analyzing another person’s thoughts and feelings is fascinating, so it is crucial that an author depicts a complex character that will occupy the reader’s minds. Many characters surprise us through the course of a story, developing in unexpected ways. An author can use various...

A Ghost Story No Angel by Bernie McGill

The narrative, “The Bound Guy” by Ilse Aichinger is written in a way in which there is more then one theme. In this specific piece, the overal style that is most obvious and most exposed is self-acceptance. Self-aceptance is revealed in various parts of this story. The “Bound Man”, showed an excellent offer of strengh...