In the play Macbeth by Shakespeare Macbeth is anything but a tragic hero. Macbeth wants to be a hero for power, not to help the kingdom and make it a better place. Macbeth is doing everything a tragic hero would not do. Macbeth only cares about himself, by ruining the great change of being and putting everything in danger. Also he has let the fame take over him, by not caring about the kingdom or the people of the kingdom. Macbeth also does not handle things like a true hero would, by killing everyone who he fears.

Don't use plagiarized sources. Get your custom essay on
“ Macbeth: Tragic Hero or Monster ”
Get custom paper
NEW! smart matching with writer

Macbeth is a greedy, self- indulged monster who only cares about him. Macbeth is a selfish human who only cares about himself, making him a monster more than a tragic hero. Macbeth shows that he is a monster when he pretends to act all innocent, to get on the good side of the king just to betray him. Lady Macbeth and Macbeth are talking about their plan to deceive the king.

Lady Macbeth tells Macbeth to “ beguile the time, Look like the time. Bear welcome in your eye, Your hand, Your tongue. Look like th’ innocent flower, But be the serpent under’t” (1,5,65-68).

This quotes shows that for Macbeth to become the king he will have to deceive King Duncan, so he can gain the kings trust and then kill him. Macbeth does not do this for the people of the kingdom or even think about what will happen to the kingdom. The phrase “beguile the time, Look like the time” shows that he is going to deceive the king so he can gain trust from the king, and then just betray him.

This is something a monster would do not a tragic hero. A hero would try to earn power and do it for the people not just for power like Macbeth. Macbeth is also showing that he is a monster when he would gladly kill the king.

That is something a tragic hero would never do, because they would protect their king even if they are o consequences and also they would not put the afterlife in danger. This is something Macbeth would have never done because all he wants is power. These quotation show that Macbeth is doing this just for power, also if he were not just doing it for power he would have let the great chain of being chosen him if he was destined to be the king. Therefore Macbeth only cares about himself, making him a monster. Macbeth has let the fame take over him, making him become greedy and not care about the people. Macbeth is so happy that he is powerful and can do anything and no one can stop him from doing anything.

Macbeth has let the fame get to his head by this he has began not care about the people in his kingdom, not even his own wife. Macbeth is asking the witches to tell him what his future will be, “Though you untie the winds and let them fight Against the churches, though the yeasty waves Confound and swallow navigation up, Though bladed corn be lodged and trees blown down, Though castles topple on their warders’ heads, Though palaces and pyramids do slope Their heads to their foundations, though the treasure Of nature’s germens tumble all together, Even till destruction sicken, answer me To what I ask you” (4,1, 52-63).

This quote shows that to find out what will happen to him. Macbeth would not care if the kingdom will destroy as long as he will get to know what happens to him. The phrase “Though you untie the winds and let them fight Against the churches, though the yeasty waves Confound and swallow navigation up”, is showing that as long he knows what is going to happen to him, he does not care if they have to unleash violent winds that tear down churches, make really big waves that overwhelm ships and make the sailors die.

A tragic hero would not want to know what his future is, if it meant that he would put his whole kingdom in danger. Also a tragic hero would not force witches to tell him what will happen to him in the future, but he would ask politely and or do them a favor. Macbeth does the opposite and forces them to tell him what he wants to know by saying, “To what I ask you”. Macbeth also is really into the fame that he does not care his own wife died. Seyton has just told Macbeth that the queen is dead; Macbeth’s response is “She should have died hereafter.

A tragic hero would have been sad that his wife has just died, and also would show that he cares about her, by doing something big like a funeral for her. Also the phrase “And all our yesterdays have lighted fools The way to dusty death”, shows that the fame has really gotten to his head because before he was a king, he loved lady Macbeth and know since the fame has taken over him he is calling her a fool and saying that she deserves to die. Macbeth is a self-indulged monster letting the fame takeover him and making him become more monstrous.

Macbeth does not handle things like a tragic hero would but like a monster, who kills everyone who threatens him or who he does not like. Macbeth fears everyone who he thinks can take all the power away from him, or people who know that he killed king Duncan. A tragic hero would never kill some who he fears, but face them, something Macbeth can never do. After Lennox tells Macbeth that Macduff has fled, Macbeth tells Lennox everything he is going to do. “The castle of Macduff I will surprise, Seize upon Fife, give to th’ edge o’ th’ sword His wife, his babes, and all unfortunate souls That trace him in his line”(4,1, 156-160).

Macbeth is afraid of Macduff; this quote shows that he will destroy anything of Macduff. The phrase “to th’ edge o’ th’ sword His wife, his babes, and all unfortunate souls That trace him in his line”, shows that he is going to kill or destroy everything or anyone that has anything to do with Macduff, because he fears Macduff. He is trying to get rid of his fear by destroying everything and anyone who in the line of Macbeth. Macbeth does this to try to make Macduff scared of him; also it helps Macbeth be proud and less scared of Macduff.

It also shows that Macbeth is doing thing that no human would do, but a monster. Macbeth also fears of Banquo who will do anything to kill him. Macbeth has a feeling that Banquo suspects that he knows that he killed king Duncan, so Macbeth wants to kill Banquo. Macbeth is telling the murders he has a plan to kill Banquo, “I will put that business in your bosoms, Whose execution takes your enemy off, Grapples you to the heart and love of us, Who wear our health but sickly in his life, Which in his death were perfect” (3,1, 107-111). Macbeth is scared of Banquo and will be in peace when Banquo is dead.

The phrase “Whose execution takes your enemy off, Grapples you to the heart and love of us”, shows that Macbeth is getting other people to do his dirty work for him and is killing innocent people, just because he fears them. Something a tragic hero would never do because they do not kill people who they fear, and they fight their own battles. These quotation show that Macbeth only cares about himself and killing people he fears being monstrous. Macbeth is a greedy, self-indulged monster who only cares about him. Macbeth killed royalty to make his dream come true and does not care about others. 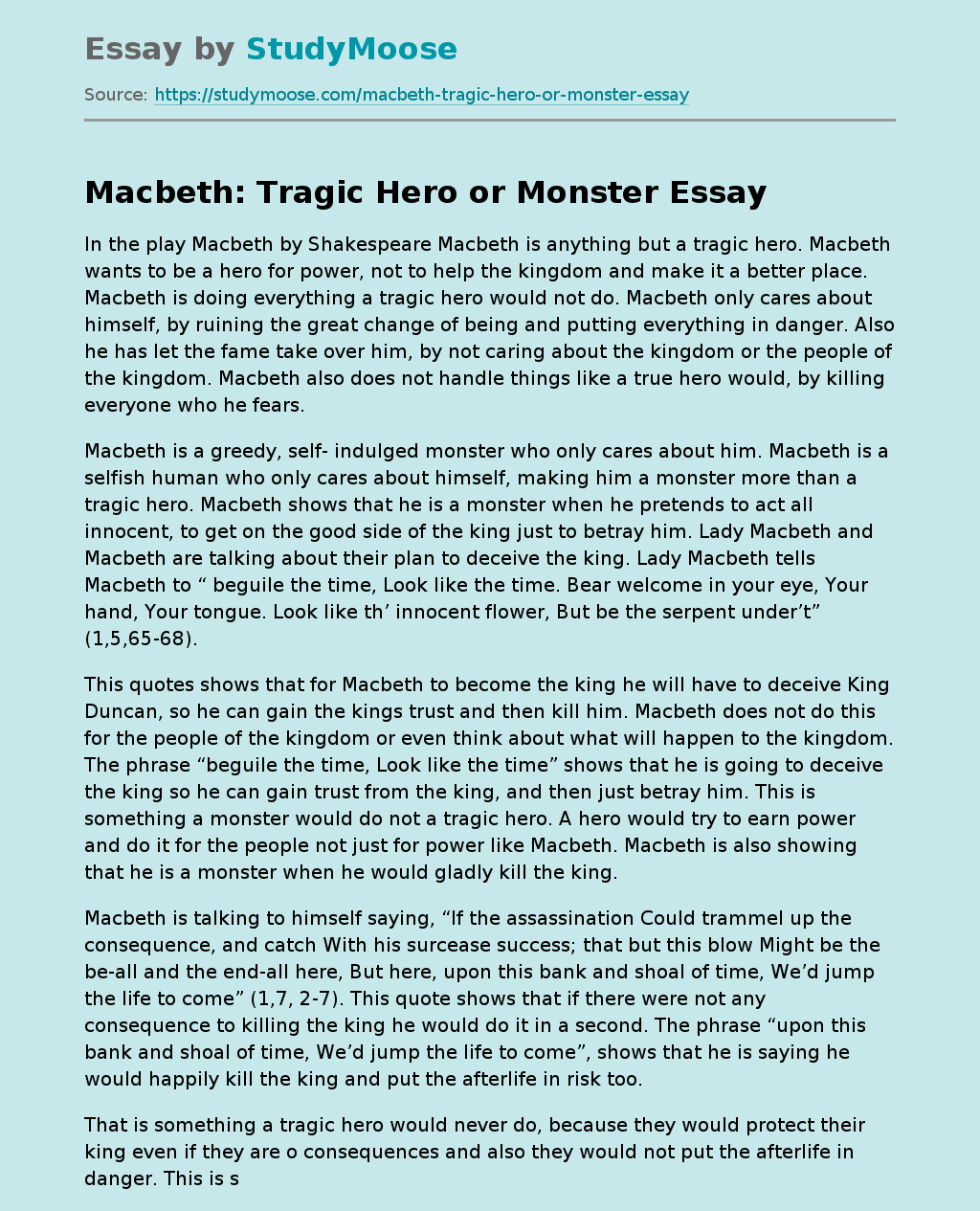