‘Frankenstein’ is a piece of Gothic literature and was written in the Romantic era. It was published in the 19th Century and was written by Mary Shelley. ‘Frankenstein’ was considered to be one of the most evil horror stories of its time; it shocked and surprised its readership due the controversial issues that it addressed. It was inconceivable that an author could engage with the idea of creating a being from body parts and bringing it to life. This raised many issues such as, should we have the right to play God? In the novel Mary Shelley writes about tragedy, death and romance.

Don't use plagiarized sources. Get your custom essay on
“ Justine’s trial and Frankenstein’s ”
Get custom paper
NEW! smart matching with writer

It was thought that perhaps many of the events in her life may have influenced the events in the story as she suffered a number of tragedies in her life, two of which where the premature deaths of her mother and son. In relation to the novel I think that this is very significant. This is significant because the character of Elizabeth relates to Mary Shelley in numerous ways: the first being that Elizabeth’s mother dies as did Mary’s when both girls were still young.

Secondly, Elizabeth then assumes the maternal role with regard to William her brother, who later dies; Mary also had a son named William who died.

Monstrosity is apparent throughout the novel in different forms. Primarily the visual and physical appearance of the creation is repellant, but also the reaction of the creator and the characters encountered by the monster reflect an element of monstrosity.

At the beginning Frankenstein is extremely enthralled with the idea of creating a being. His expectations and standards are high and he wants his creation to be beautiful. He spends so long in the process that he becomes mentally, physically and emotionally exhausted. There is a build-up of tension and suspense within the end of the fourth and the very beginning of the fifth chapter.

It is only in the culmination of his work that Frankenstein fully appreciates, to his horror, that it is not a beautiful being that he has created, but a monster. His realization of this makes him very anxious and apprehensive and he decided to ignore the situation and not deal with the consequences of this actions. The following quotes show his despondency and alarm and how he reacts to the situation, “How can I describe my emotions at this catastrophe… ” “The different accidents of life are not so changeable as the feelings of human nature. ” “The beauty of the dream vanished. ”

These quotes all show that he dreamt of creating something magnificent, but instead created something monstrous. His reactions to his creation could be considered hideous or shocking, because he chose to create this being of his own volition. Now that the being is finished, he is disgusted and shocked; it seems as if he created it with his eyes closed. He has chosen to reject his creation and not nurture or embrace it. This is inexcusable as it is comparable with a mother rejecting her newly-born child. Frankenstein has now deserted the monster and hides away in fear of its return.

The monster has been left to roam the streets and survive alone like a wild animal. It has received no explanation or reason for its creation or purpose and, even when the monster meets his master, Frankenstein treats him as a lesser individual, abuses him and almost straightaway dismisses anything that the monster has to say to him. These quotes give evidence of this, “Begone, vile insect! Or rather, stay, that I may trample you to dust. ” “Begone! I will not hear you. ” And the monster says, “You, my creator, detest and spurn me … ”

These quotes show that Frankenstein deems his monster to be on the same level as an animal and that he is prepared to destroy the monster as quickly as he created it. He is extremely reluctant to listen to anything the monster has to say, when, in fact, Frankenstein has a responsibility to support the monster. This could be viewed as unacceptable because Frankenstein has made no attempt to suppress his feelings and opinions of the monster. The monster contains himself and shows a degree of respect towards his creator; as a son would show to his father, “… I will be even mild and docile towards my natural lord …

” Yet Frankenstein is foul-mouthed and insolent and refers to the monster as an insect. Victor has not yet demonstrated any affection or remorse towards his creation and does not intend to do so. In the first instance it is contemptible that he gave life to a dead mass of body parts, but even more so is his desire to terminate its life. Victor asserts that if the monster remains, he will trample it to dust. He threatens to extinguish the monster’s life as if it were a flame; yet he is in no way justified in his proposed actions. Frankenstein has decided to forsake the monster in the hope that it will disappear.

This results in the monster avenging his creator by murdering his brother, William and causing the hanging of Justine Moritz (a household member). ‘I the cause… ‘ these are the words spoken by Frankenstein while Justine is awaiting the verdict of the trial. This shows that even though Victor did not kill either of them, he knows that he is the root cause of their deaths and has, ‘suffered living torture… ‘ because of it; indicating that he has a guilty conscience. It was in his power to substantiate Justine’s innocence while she was on trial, but by doing so he would have implicated himself. 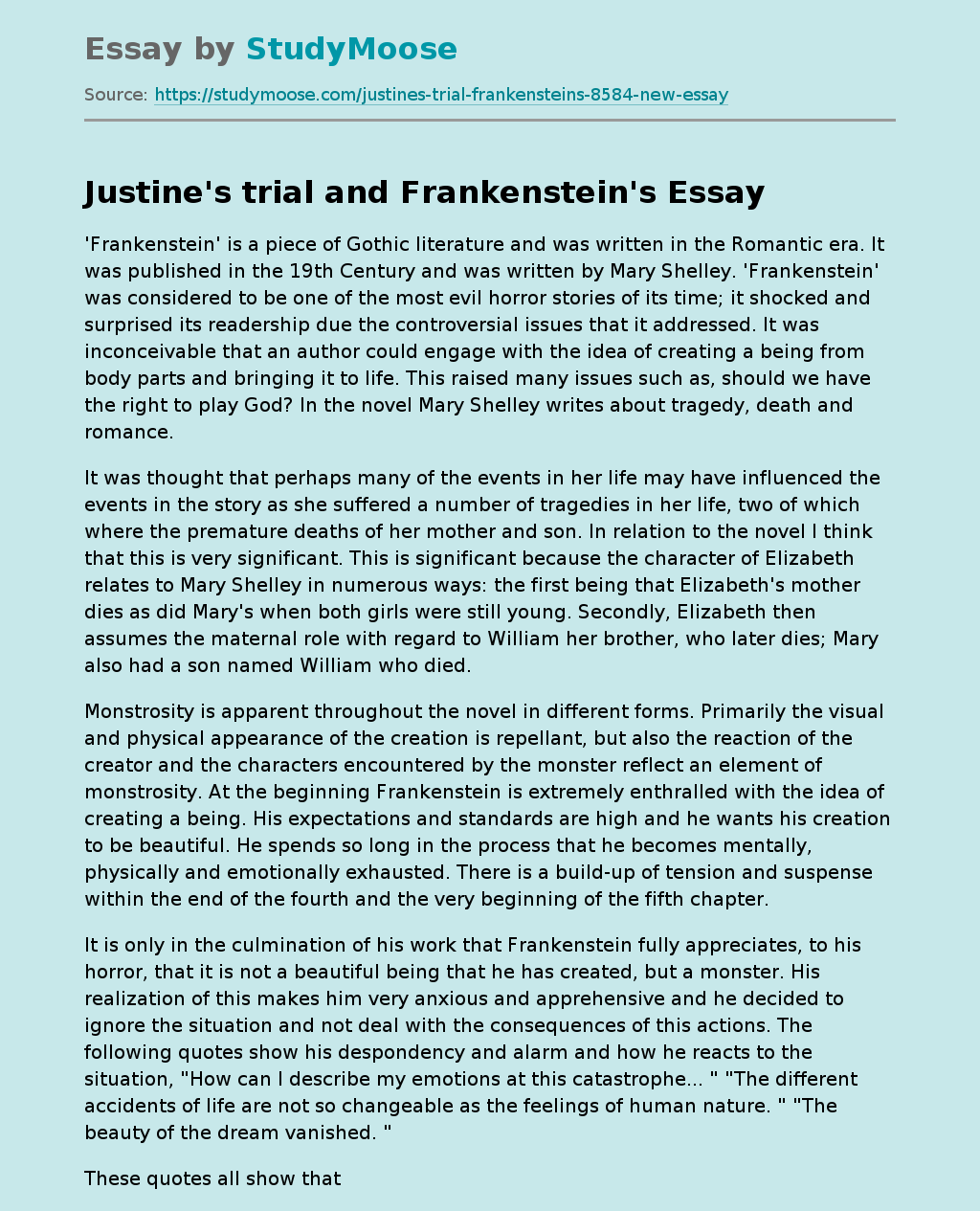