In the gothic novel Frankenstein written by Mary Shelly Victor Frankenstein creates a monster. At first glance this gothic tale is about this creature’s terrible action against society in the late 1700’s. Many people who read this novel, would believe that the monster to be the novels villain, however the events that occurred are that repercussions of one man’s irresponsible and reckless behavior. Although this man was not the one who killed his beloved family and friends. Victor Frankenstein is indeed the sole cause of this deathly catastrophe and is the one to blame; by creating the monster, not taking responsibility for it , and then isolating himself from the world causing his creation to roam as it pleased, leaving his creation unattended and neglected.

Don't use plagiarized sources. Get your custom essay on
“ Victor Frankenstein Is To Blame Mary Shelly Frankenstein ”
Get custom paper
NEW! smart matching with writer

Victor Frankenstein ultimately caused the ruin of his closest friends and family, his human-like creation, and eventually his own life.

Although the monster murdered Victors loved ones’, it is ultimately Victors own fault that his creation murdered innocent people.

The initial creation of the monster is the main reason as to why Victor is to blame for the tragedies. However, the monster was given life, the killings could have also been avoided if Victor took responsibility for his creation. Rather, he abandoned his creation, and left the monster alone, confused in an unfamiliar world. “Was I, then, a monster, a blot upon the earth, from which all men fled and whom all men disowned? (Shelly, 108)” It is believed that this feeling of abandonment angered the monster, Victors’ creation, resulting in revenge on the creator man who created him.

The monster killed the people close to Victor because he was not brought up to know the difference between right and wrong. Victor’s younger brother was the first victim: “You belong to the enemy- to him towards whom I have sworn eternal revenge; you shall be my first victim (Shelly, 131)”Afterwards, the monster explains to Frankenstein why he has killed his brother. Despite the fact that Victor has caused the monster to live a life of pain, the monster still will reason with Frankenstein, proving that the monster is not solely responsible for the tragedy.

“I am content to reason with you. I am malicious because I am miserable. Am I not shunned and hated by all mankind? You, my creator would tear me to pieces and triumph; remember that, and tell me why I should pity a man more than he pities me?(Shelly 134)”

The monster says that if Frankenstein will create him a mate, the monster will leave Frankenstein alone, and there will be no more killings. Victor agrees, but then in the process of creating the companion, decides to ignore the monsters wishes. This selfish act is regarded by the monster as yet another betrayal. He in turn kills those closest to Victor, his wife Elizabeth and best friend Henry Clerval, as a punishment to the man who caused him a life of pain and solitude.

Not only did Victor Frankenstein’s irresponsible behavior lead to the death of his loved ones, but his selfish and negligent actions also caused the emotional and eventual physical breakdown of his creation, an initially innocent living being. As the monster was left alone, to grow up in a strange world by himself, he was never taught how to interact with others. More importantly, he does not realize why everyone around him thinks him to be a vicious monster.

“And what was I? Of my creation and creator I was absolutely ignorant, but I knew that I possessed no money, no friends, no kind of property. I was, besides, endued with a figure hideously deformed and loathsome; I was not even the same nature of a man (Shelly, 108).”

This solitude and confusion causes the monster emotional pain. He realizes he will never be loved, and will always be alone in a strange and hateful world. Thus, he looks to seek revenge on the man who left him with such emotional scaring. However, after the monster commits the murders, he is not left with feelings of happiness and triumph. Rather, these events lead to an even further emotional breakdown. “For while I destroyed his hopes, I did not satisfy my own desires…still I desired love and fellowship, and I was still spurned. (Shelly, 211).” The monster is also left confused and broken. Why is it that he is the only one to blame, when all humankind sinned against me? “Am I to be thought the only criminal, considering Frankenstein has caused him all this pain?” Ultimately, the emotionally wrecked creation retreats from society in isolation to live what one can only guess to be a lonely and horrible life, caused by one man: Victor Frankenstein.

One could argue that the monster is to blame for the death of Victor Frankenstein, as he was the one who destroyed Victor’s life by killing those he loved most. However, it is Victor himself who is to blame for his miserable life and eventual death. In the beginning of the novel, before the monster was even created, we see Victor’s mental and physical health withering away because of his obsession with his experiment. “Every night I was oppressed by a slow fever, and I became nervous to a most painful degree…sometimes I grew alarmed at the wreck I perceived that I had become (Shelly, 42).” This foreshadowing proves that Victor is the one inflicting pain upon himself because of his need for knowledge. His mental and physical condition only worsens as the story continues. Because of his irrational behavior and fear, Victor ends up alone and mad, like his own creation. Again, if he had never let his yearning for knowledge overcome him, the monster would never have been created. But despite the fact he was created, Victor could have still prevented the tragedies if he would have overcome his fear.

For example, when Victor agrees to make the monster a mate, he goes back on his word and destroys the new creation, as he is afraid of what she will then do to him. He excuses his behavior by saying: “He had sworn to quit the neighborhood of man and hide himself in the desert, but she had not…might refuse to comply with the compact being made before her creation (Shelly, 155).” This act, promoted by fear, leads to the death of two more innocent beings. In turn, Victor’s emotional and physical well-being worsens. Victors need for revenge upon his creation is the last factor that leads him to the end of his life. “You may give up on your purpose, but mine is assigned to me by heaven and I dare not. I am weak, but surely the spirits who assist my vengeance will endow me with sufficient strength (Shelly, 206).” Therefore, Victor dies and leaves the world lonely and mad. With this, it can be said that because of his need for knowledge, his fear, and his need for revenge, it was Victor himself who caused his own death and destruction, not his creation.

In conclusion, it has been proven that although it was the creature that committed the violent acts, killing innocent people, the ultimate responsibility for these deaths lies with Victor Frankenstein. He was the creator who abandoned a living being, without regard to the monster’s feelings and any source of protection from emotional pain. This was the cause of the monsters actions, which in turn resulted in the deaths of Frankenstein’s loved ones, the withdrawal of the creature from society, and finally Victors own death. 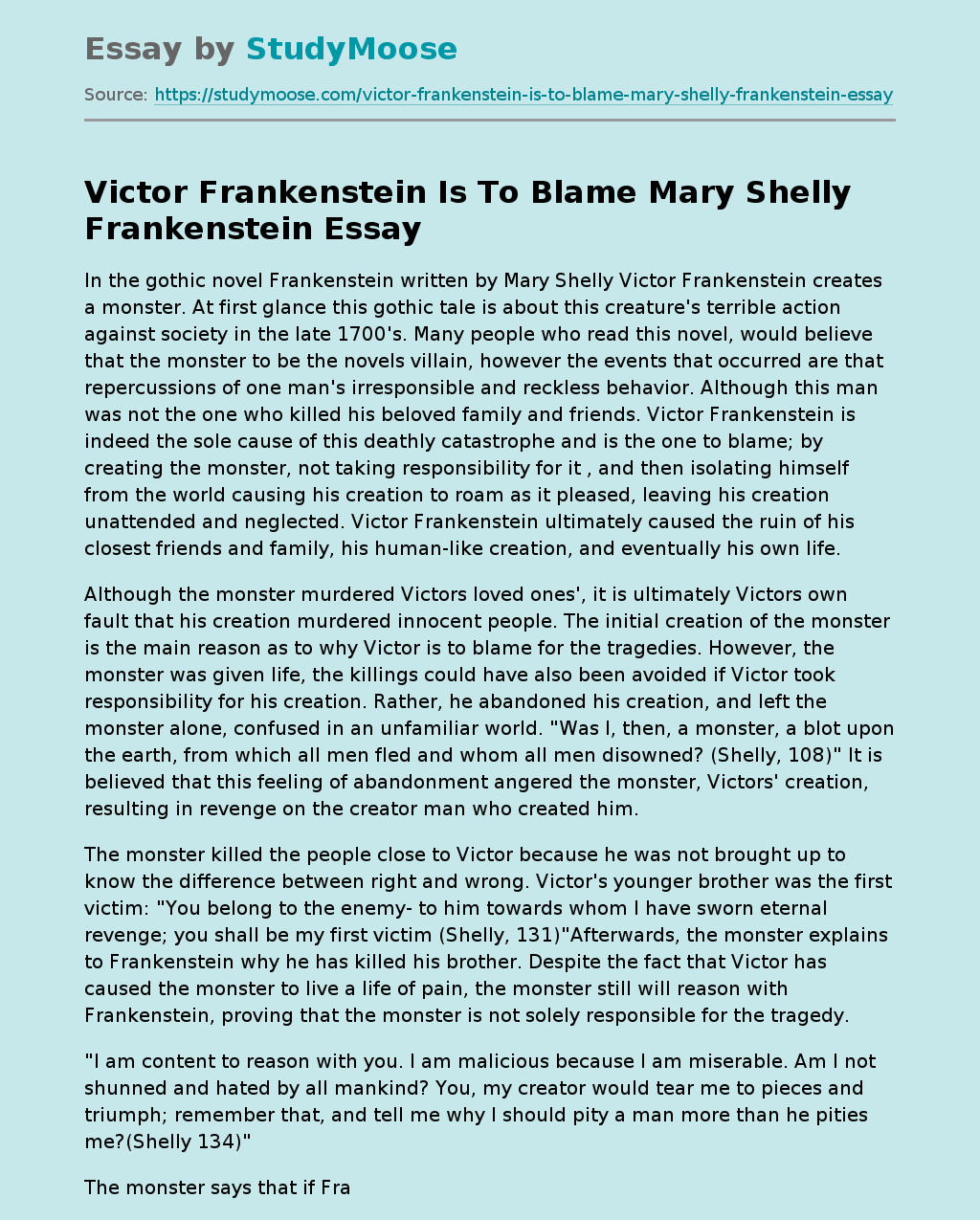