Victor Frankenstein, to an extent, is a tragic hero

Turn in your highest-quality paper
Get a qualified writer to help you with
“ Victor Frankenstein, to an extent, is a tragic hero ”
Get high-quality paper
NEW! AI matching with writer

The last point is how he was physically and emotionally scarred of his experience. These points all point to the philosophy of Aristotle and his belief of what a typical tragic hero should have if it is to be a tragedy.

Firstly, Victor Frankenstein shows the trait of how he leads to his downfall due to his excessive pride in his work of making a dead person coming back alive. With his determination and knowledge, he speedily creates his monster at the cost of his personal health and family time.

Victor’s choice of utilizing his time to build the monster shows how his pride to become the first person to bring the deadalive again is his first major flaw in the story. This is one of the many points that lead to an average Aristotelian tragic hero.

Secondly, Victor discovers his fate by his own actions, especially when he learns of his entire family’s deaths and finally acts to stop the monster and get his revenge, however he acts too late as all his loved ones are killed, which brought him to his own demise as he chases the monster through the wildness for many years.

This is a common trait found in many tragic stories and one of the many features that concludes that Victor, to an extent is himself an Aristotelian tragic hero.

The last point that Victor Frankenstein has that is part of being a typical Aristotelian tragic hero is that he is both physically and emotionally scarred of his experience as he loses his life in his attempt to destroy his monster. This shows how he wishes to undo and seek forgiveness for his actions that results in many close loved one dead. This is one of the many features, which supports the claim that Victor is a tragic hero.

In conclusion, using the characteristics and other features f a typical Aristotelian tragic hero, Victor Frankenstein, to an extent is a tragic hero because he’s determination and lust for acknowledgement from the world for his creation of turning a dead corpse into a living person was his major downfall as he puts work in front of family and relaxation. Victor also extends his tragedy by trying to take revenge on the monster where he becomes even more physically and motionally scarred than ever. This all shows that Victor Frankenstein was truly, to an extent, a tragic hero.

Victor Frankenstein, to an extent, is a tragic hero. (2016, Aug 03). Retrieved from https://studymoose.com/victor-frankenstein-to-an-extent-is-a-tragic-hero-essay 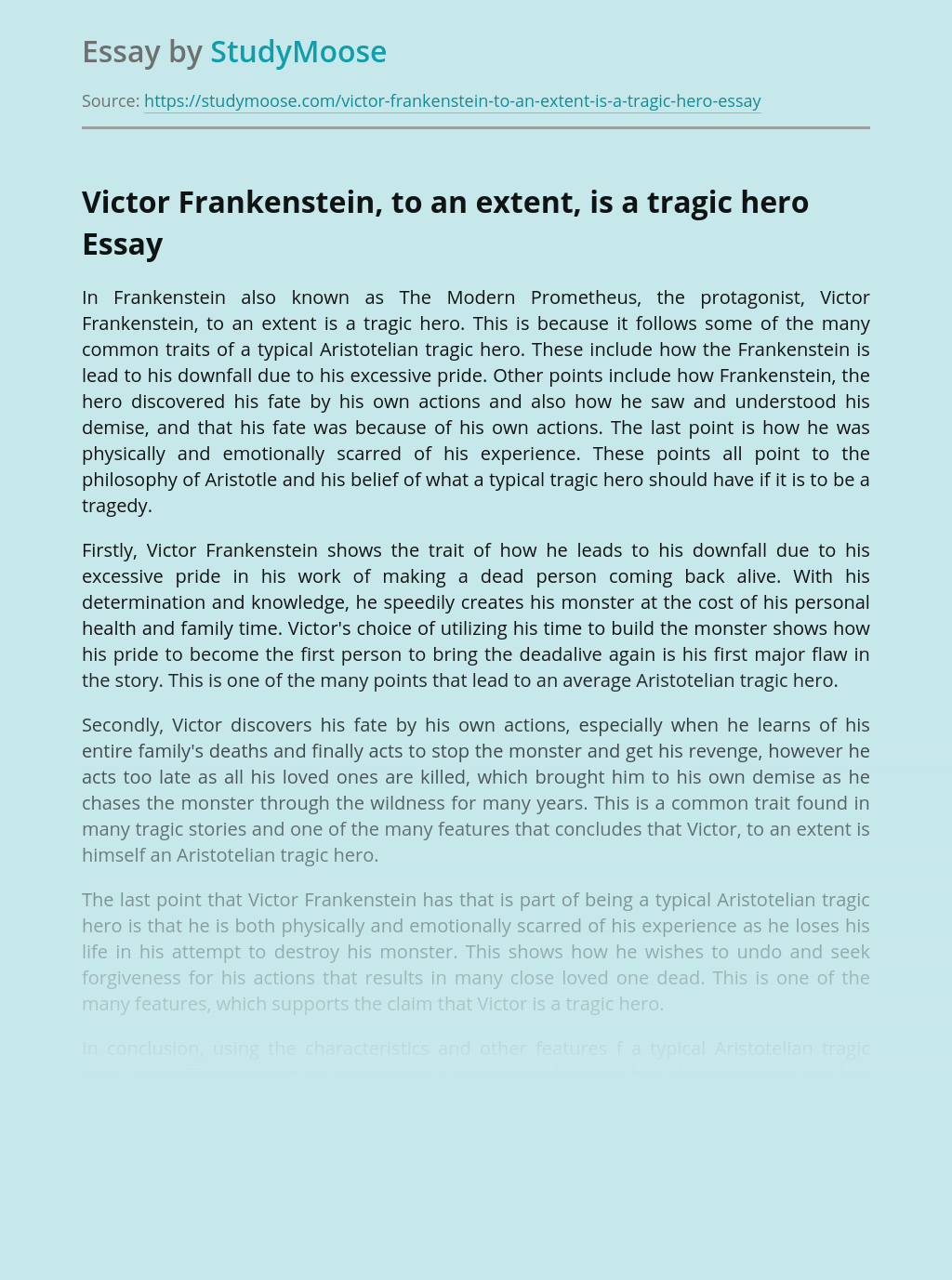 Turn in your highest-quality paper
Get a qualified writer to help you with
“ Victor Frankenstein, to an extent, is a tragic hero ”
Get high-quality paper
Helping students since 2015
Stay Safe, Stay Original