This article is devoted to a novel that answers questions that have confused both the author, Mary Shelley, and the readers of all times. “Frankenstein” is famous for the wealth of ideas, it asks humanity to confront, how knowledge could be used for good and evil purposes, how uneducated and deprived people are treated, and how the technological impact affects humanity. This novel illustrates that even the most unreal desires and projects can be tried, and accents on the fact, that you’re always responsible for your actions.

Don't use plagiarized sources. Get your custom essay on
“ Victor Frankenstein and Robert Walton there similarities ”
Get custom paper
NEW! smart matching with writer

The composite structure of “Frankenstein “is multilinear, represents three concentric directions, which are imposed on the storyline. The first line, opening, and closing novel describing who is Robert Walton in “Frankenstein,” is conducted on behalf of English travel Captain Robert, in his letters to the sister. This character acts in the role of lead narrator and commentator of events, and he gives the story an effect of entertainment and probability.

Robert Walton represents the healthy human being, and he also represents the balance between Frankenstein and the monster. Robert has bad and good sites which can represent Victor’s bad side and the monster’s good side. Both of these aspects are examples of the healthy human being.
Walton’s scientific views are naive and romantic. The pole for him is a mysterious ice space, on the border of which begins a new world, where the sun never sets. His enthusiasm is not only connected with the discovery of a new unknown land but also with the possibility to check on practical human knowledge, for example, he wants to open the secret of the wondrous force.

Walton is not an inquisitive scientist who studies scientific hypotheses in practice; he is a curious favor to society, a traveler seeking to discover a new space and land.
The second line of narration is the story represented by the main character, scientist Victor Frankenstein, who forms the outer layer of the content and implemented in I – XXIV chapters of the novel. Intensive injection of events associated with the pursuit of his monster creates a psychological tension of action. In this narrative level philosophical idea of the work is revealed – the idea of the scientist responsibility for his scientific discovery.
Victor Frankenstein is a young, brilliant, scientist who is obsessed with finding the secret of giving life. He works alone in his laboratory, and he creates a living being out of the organs of dead man. The character of Victor in Shelley’s novel is represented by a man of science and his calling in life is to follow his dream of understanding the miracles of the world. He spends almost his entire time recreating life in the form of a monster. However, he is not aware of the consequences. In the end, he spends his life trying to destroy the same creation he has tried so hard to create. During the period at the university, where he does the experiments, Victor isolates himself from society, and all his time and efforts are devoted to the desire of knowledge.
The third narrative line is a hidden mythological layer associated with the image of the monster, or homunculus, created by the scientist Frankenstein.

Similarities between the characters of main heroes.

Those characters seem to be so different, but they have a very important thing in common –forbidden science. Besides, Robert Walton is the first double nickname of Victor Frankenstein. His second twin will be a monster or demon created by him. Such a construction of the system of times, obviously, was dictated by complex philosophical and moral questions in the novel, to disclose the history of Frankenstein and his embodiment in the various aspects and solutions.
Robert chooses, like Victor, isolation with his expedition, but on the other hand, Walton also longs for companionship. He’s in the balance between Victor, who isolates himself from society and the creature, which yearns for nothing but to be a part of the society. Walton is someone who can strive for discussion but, at the same time, turns back when his actions might harm others. Walton’s entire childhood was spent in loneliness, as he educated himself in a similar way to Victor. Another parallel reference to Victor is that Walton also chooses isolation because of his lust for knowledge.
Moreover, both Victor Frankenstein and the Arctic explorer Robert Walton, whose letters open the novel, hold a greedy thirst for privileged knowledge of those things that are unknown to the common person. Nevertheless, Shelley presents their stories as being in some sense similar to each other. Each of them is a failure, and each suffers from the same fatal flaw. Walton, a voyager, explores the secrets of the natural earth, in the company of a crew of men on the same mission. However, Victor works in privacy to enter secrets of a physical nature, specifically, the principle of life. Though they explore entirely different lands, Walton and Victor are both bound by a common cause. Each tries to further the knowledge of humanity and glorify his name. However, unlike Robert Walton, Frankenstein makes a creature that is dangerous to society, that he can’t control, but he knows, that we are responsible for those we’ve tamed.

Robert Walton can be considered as the most important person in the novel. Shelley has given Walton a well-integrated personality and compared with Frankenstein and the creature; he represents a healthy human being.
Victor Frankenstein, like many romantics, relies on his unusual ability for sensitivity and creativity to help him in his ambition. Unlike Robert Walton, who ventures to the North Pole to find “beauty and delight” in the midst of desolation, Frankenstein wants to create a better race as a gift for humanity. Despite the fact that Victor and Walton seem to carry out completely different tasks, the main motive is the same: just for spiritual exaltation, to elevate their minds and souls above other people.
Unlike Captain Robert Walton, slowly moving on northern territories and the seas, dreaming to reach the North Pole, young Victor Frankenstein moves intensively in space, but describes the specific places of life events – Switzerland, Italy, Germany, Mania, France, Holland, England, Scotland, Ireland, the Reina, the Mediterranean and Black Seas, territory of Russia and Asia, the northern seas.
Shelly can show all these aspects because her femininity remains carefully circumscribed and her choices are conventional.
This article aims to illustrate that people can be addicted to technology, science, or desire to power. Neither Victor, nor Walton has chosen by himself to be in the situation of loneliness, they are victims because of the actions of others, and these actions have subsequently left them in the group of isolation. But the most important thing that connects Walton and Frankenstein is a desire to open something forgotten, unknown or forbidden. 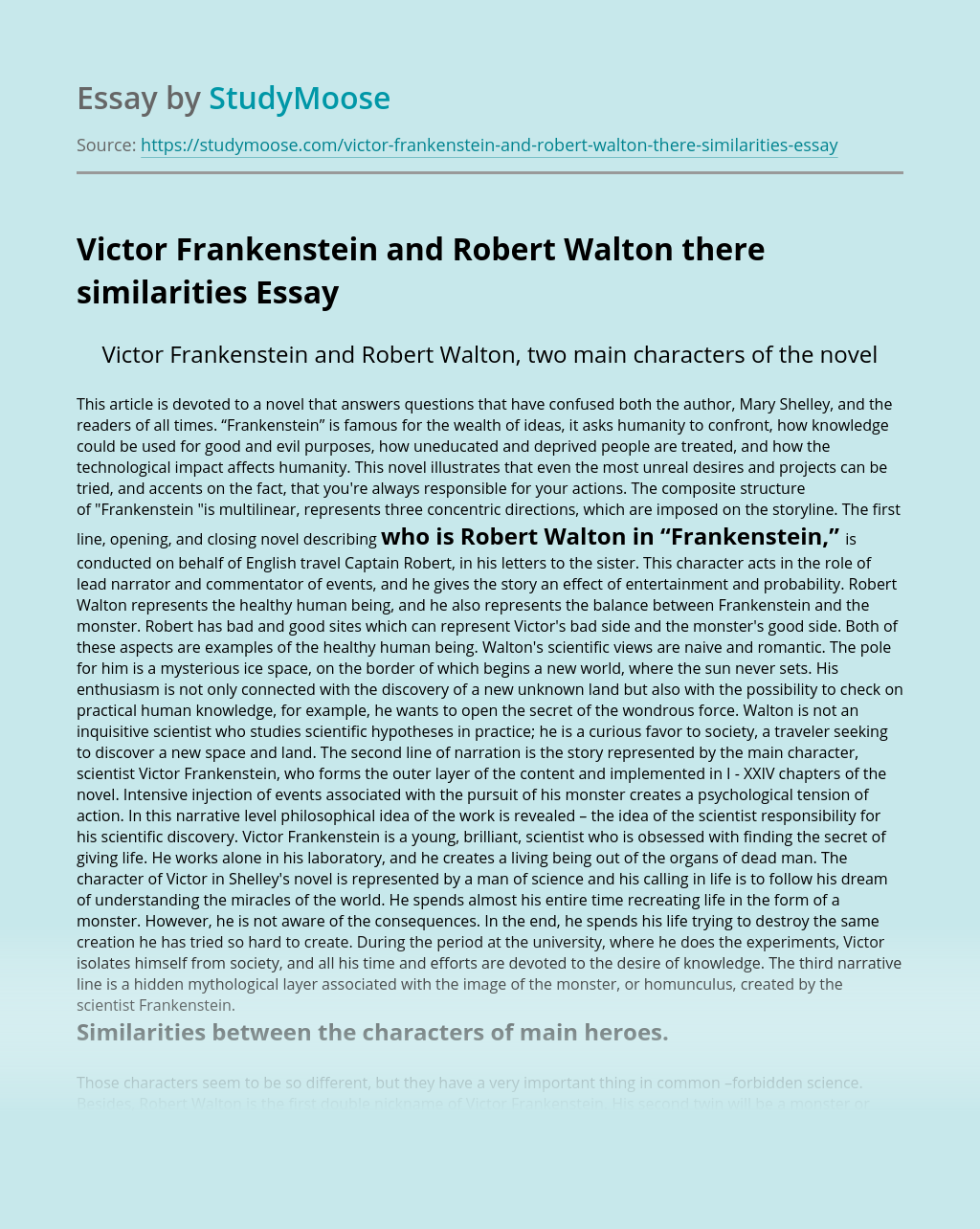