Mary Rowlandson was a Puritan women living in Lancaster, Massachusetts with her husband Joseph, and their three children, when the Indians captured them. The Indians killed Rowlandson’s sister and her youngest child. In 1758, fifteen year old Mary Jemison was captured by a Shawnee and French raiding party that attacked her farm. She was adopted and incorporated into the Senecas, she became very close to her Seneca sisters. Mary refused the opportunity to return home, finding life in Indian society more rewarding, then going back to the British colonial culture.

Turn in your highest-quality paper
Get a qualified writer to help you with
“ Mary Rowlandson vs. Mary Jemison’s ”
Get high-quality paper
NEW! AI matching with writer

These two women had very similar interpretations of the Indians and how they treated them. Mary Rowlandson’s view of the Indians that captured her, is harsher compared to Mrs. Jemison’s.

Mrs. Rowlandson saw them burn and destroy homes, knock people on the head, and kill the ones she loved and knew. I can see why she referred to them as “barbarous creatures”, “murderous wretches”, “heathen,” “ravenous beasts,” and “hell-hounds”.

A women of her stature, who was a puritan and thought of these people to be of the wilderness, was not used to their way of life. She and her children were dragged through the wilderness, trying their best to survive. She began to adapt to the living conditions by finding her own food, making her own clothes, and tolerating the Indians. She relied on God and scriptures to uplift her spirit as she traveled with her capturers; which I believe helped her not only survive, but helped her learn that the Indians are Gods creation too, and should be forgiven just as the Lord has forgiven us of our sins, even if they did do horrible things to her and the people she knew.

Mary Jemison on the other hand did not go through such a horrifying experience when the Indians captured her and her family. She heard that there had been conflict in the Indian and French War and there could be no doubt that they might get involved in the turmoil. When she came of age she married a Delaware man named Sheninjee and had a child with him, whom she called Thomas after her father. Mrs. Jemison stated that they were captured by six Indians and four Frenchman, who immediately commenced plundering and took what they considered most valuable, which consisted of bread, meal, and meat. On that same day as they were marching, she said an Indian went behind us with a whip, with which he frequently lashed the children to make them keep up; we traveled till dark without a mouthful of food or a drop of water. She also states that when the children cried for water at night they were made to drink urine .

The Indians took her and a little boy, after they put moccasins on their feet, and led them to another path leaving the others behind. Jemison stated that “early the next morning the Indians and Frenchmen that we had left the night before, came to us; but our friends were left behind. It is impossible for anyone to form a correct idea of what my feelings were at the sight of those savages , whom I supposed had murdered my parents and brothers, sisters, and friends, and left them in the swamp to be devoured by wild beasts!”(pg. 137). Jemison probably hated them at this moment but who wouldn’t they left her family to be murdered, but while she traveled on this long journey with them she began to watch the customs the natives were used to and did; like getting rid of their tracks left behind them and making sure everything they touched was put back into place so they would not be followed.

She recalls that even though she was there prisoner they supplied her with a meal, new Indian clothes, they undressed and dressed her and washed her clean. After the Indians had did these things for her, they relieved there cries and howling at a ceremony for a deceased relative; Mrs. Jemison goes on to say “in the course of that ceremony, from mourning they became serene—joy sparkled in their countenances, and they seemed to rejoice over me as over a long-lost child. I was made welcome amongst them as a sister to the two squaws mentioned before, and was called Dickewamis; which being interpreted, signifies a pretty girl, a handsome girl, or a pleasant, good thing. That is the name by which I have ever since been called by the Indians. It was my happy lot to be accepted for adoption: and at the time of the ceremony I was received by the two squaws, to supply tile place of their mother in the family; and I was ever considered and treated by them as a real sister, the same as though I had been horn of their mother.

During my adoption, I sat motionless, nearly terrified to death at the appearance and actions of the company, expecting every moment to feel their vengeance, and suffer death on the spot. I was, however, happily disappointed, when at the close of the ceremony the company retired, and my sisters went about employing every means for my consolation and comfort. Being now settled and provided with a home, I was employed in nursing the children, and doing light work about the house. Occasionally I was sent out with the Indian hunters, when they went but a short distance, to help them carry their game. My situation was easy; I had no particular hardships to endure. But still, the recollection of my parents, my brothers and sisters, my home, and my own captivity, destroyed my happiness, and made me constantly solitary, lonesome and gloomy.”(p. 142-143).

The Indians took Mrs. Jemison in and made her one of their own, and even though they did this she still feels remorse for her family, but doesn’t have hatred towards them, but learns their ways and becomes accustomed to their lifestyle. In the end she becomes a part of their life and them a part of hers, which she most likely didn’t think would happen. The difference between Mary Rowlandson and Mary Jemison is that Mrs. Rowlandson went through a much more disastrous and awful experience with the Indians, they didn’t show her as much mercy as the Indians did during the Indian and French War.

Rowlandson also clings closer and relies on God for hope and comfort compared to Mary Jemison; even though Jemison did pray and try to stay tied to her roots, she eventually ended up conforming to the Indian lifestyle, unlike Mrs. Rowlandson. The time difference between the two women is also a factor that plays a role in how they were treated and how they perceived the Indians. These two women were strong and ended up becoming famous for their captivity novels, which hopefully they are proud of for sharing their history on this matter. 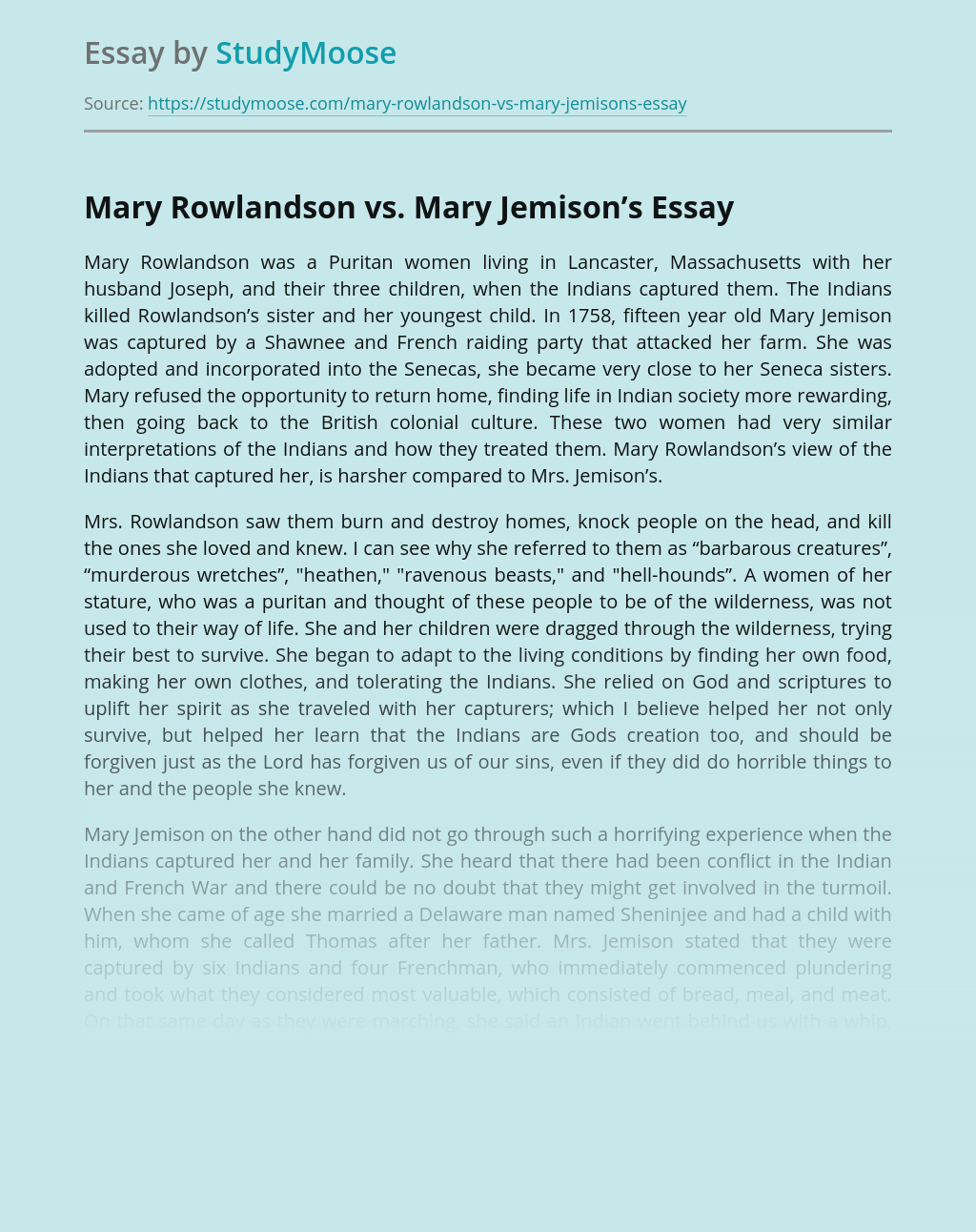 Turn in your highest-quality paper
Get a qualified writer to help you with
“ Mary Rowlandson vs. Mary Jemison’s ”
Get high-quality paper
Helping students since 2015
Stay Safe, Stay Original