Who was Mary Wollstonecraft?

Mary Wollstonecraft was a very complex person and to try to completely describe who she was would be impossible. However it’s not impossible to share her life and what she accomplished. Mary was born in 1759 in London; she was the second of six children. Her father was an alcoholic and her mother was a battered house wife. Wollstonecraft tried to protect her mother from her father’s attacks but she was also a victim of her father’s abuse.

Don't use plagiarized sources. Get your custom essay on
“ Mary Wollstonecraft and the Early Women’s Rights Movement ”
Get custom paper
NEW! smart matching with writer

She had very little formal education and was largely self-taught. When she was nineteen she went out to earn her own living. In 1783, Mary helped her sister escape a miserable marriage and later on the two sisters founded and taught at a school in Newington Green; an experience from which Mary drew to write Thoughts on the Education of Daughters: With Reflections on Female Conduct, in the More Important Duties of Life. Shortly after Mary became the governess in the family of Lord Kingsborough, living most of the time in Ireland.

Following her dismissal Wollstonecraft spent several years observing political and social developments in France, and wrote History and Moral View of the Origins and Progress of the French Revolution.

Her first child, Fanny, was born in 1795, the daughter of American Gilbert Imlay. When Imlay deserted her she tried to drown herself. Eventually she recovered and went to live with William Godwin, a longtime friend. She then married Godwin in 1797. Wollstonecraft died a few days after the birth of her second daughter, Mary. Before Wollstonecraft died she had been writing a book called Maria, or the Wrongs of Woman; it was published unfinished in Paris in 1798. Wollstonecraft believed that women’s freedom should extend to their sexual lives. In her writings, she compared married life for a woman to prostitution. Mary argued that women had strong sexual desires and that it was degrading and immoral to pretend otherwise.

Early on in her life, Mary Wollstonecraft began making great contributions and brought new and not well-received views on women and society. She fully supported that if girls were pushed and encouraged from an early age to develop their minds, it would be seen that they were fair balanced creatures and there was no reason whatsoever for them to not to be given the same opportunities as boys with regard to education and training. She believed education could be the salvation of women, education held the key to achieving a sense of self-respect and anew self-image that would enable women to put their capacities to good use. She insisted women be taught serious subjects like reading, writing, arithmetic, botany, natural history, and moral philosophy. In proposing giving the same education to girls as given to boys, she went a little further and proposed that both girls and boys be taught and educated together.

Now this was even more extreme than anything that was proposed before because the mere idea of co-educational schooling was simply looked on as absurd. Many educational thinkers of the time considered co-educational schooling a ridiculous idea. Wollstonecraft called herself “a new genus” a woman who made her own living my writing. At one point in Mary Wollstonecraft’s life she was homeless, without a job, she had nothing to live on and she was in debt to many people. She was 28 years old and had no plans to marry any time soon. She had nothing yet she still refused to learn the techniques where most women in her situation would usually try to make life decent enough for themselves to live. In other words they would surrender themselves to the will of man or their social superiors, but she refused to do so, she was “a new genus.” She believed that marriage as it was practiced was the equivalent of legal prostitution, and that women would never be able to show the ability to be independent, reasoning, free human beings as long as they were only educated “ to catch a man”. Wollstonecraft thought that women should be educated to support themselves, with or without marriage, and that they should be able to have the same professions as any man.

At the very least she believed women should have equal rights to custody of their own children and be able to control their own money. Mary Wollstonecraft had believed that when revolutionaries had talked about “man,” they were using shorthand to describe all humanity.Then in 1791, former Bishop of Autun promoted government schools that would end at 8th grade for girls but continue on for boys. This made it clear to Wollstonecraft that despite all the talk about equality between men and women, the French Revolution wasn’t planning to help women as much as it said it was. She then began writing her most famous work, A Vindication of the Rights of Woman. It was published in three volumes. During the late eighteenth century in Western Europe, single women had very little protection under the law and when they were married women lost their legal identities. Women couldn’t have a lawyer, sign a contract, vote, inherit property, or have rights over their own children. William Blackstone, an Oxford law professor, wrote ” The husband and wife are one person in law; that is the very being or legal existence of the women is suspended during the marriage or at least incorporated and consolidated into that of the husband: under whose wing, protection and cover, she performs everything.”

Basically saying that when a woman gets married her identity and existence is taken away legally. Some of her identity is shared with her husband but over all she does not legally exist and the only protection and safety she has is with her husband, who she must do everything for. Then along came Mary Wollstonecraft, who caused quite a stir with her book A Vindication of the Rights of Woman. She believed that women and men were both human beings empowered with basic rights to life, liberty, and the pursuit of happiness. She insisted that women should be free to enter business, pursue professional careers, and vote if they wanted to. Mary took the task of helping women to achieve a better life, not only for themselves and for their children, but also for their husbands. Wollstonecraft inspired many people because she wrote with such passion and spoke from the heart.

A Vindication of the Rights of Women

A Vindication of the Rights of Women was one of the earliest works of feminist philosophy. In the book Wollstonecraft argues that instead of viewing women as ornaments to society or property to be traded in marriage, women are human beings and deserve to have the same essential rights as men. Wollstonecraft was encouraged to write A Vindication to the Rights of Women after reading Charles Maurice de Talleyrand-Perigord’s 1791 report to the French National Assembly. The report stated that that women should only receive a domestic education; she used her interpretation on this specific event to launch a broad attack against sexual double standards and to accuse men for encouraging women to indulge in excessive emotion. She even dedicated A Vindication of the Rights of Women to Talleyrand, who at the time was designing a national education program for boys in France. She hoped to convince him that a system like that should include girls for the same programs and in the same classrooms as boys.

How Mary Wollstonecraft made a difference for Woman’s Rights Throughout her whole life Mary Wollstonecraft had been fighting for equality for women, but what got people’s attention was her book A Vindication of the Rights of Women. In the book she not only argues that women should have the same educational opportunities’ as men she also wrote that women should have the same rights as men within the law. A Vindication of the Rights of Women covered a wide range of topics relating to the condition of women. When making her argument supporting the equal education for woman Wollstonecraft also talked about her theories on the social, legal, and environmental causes for the rank of women. After writing A Vindication of the Rights of Woman, Wollstonecraft rose up into a class of her own. She had gone beyond many others who had written about educating women and those who had done well by making the most of the lower position of women.

A large amount of women novelists had portrayed women who achieved heroic moral importance, but they didn’t always celebrate women with brains. During her lifetime, Wollstonecraft raised argument in support of Women’s Rights that would become important in the Women’s Rights movements of the following two centuries. Her work in pursuit of equality for women led her to being named the founder of the British Women’s Rights Movement. Mary Wollstonecraft was a pioneer for women. She envisioned a future when women could pursue virtually any career opportunities. She led the way for feminists and her book is a classic that still inspires people today. 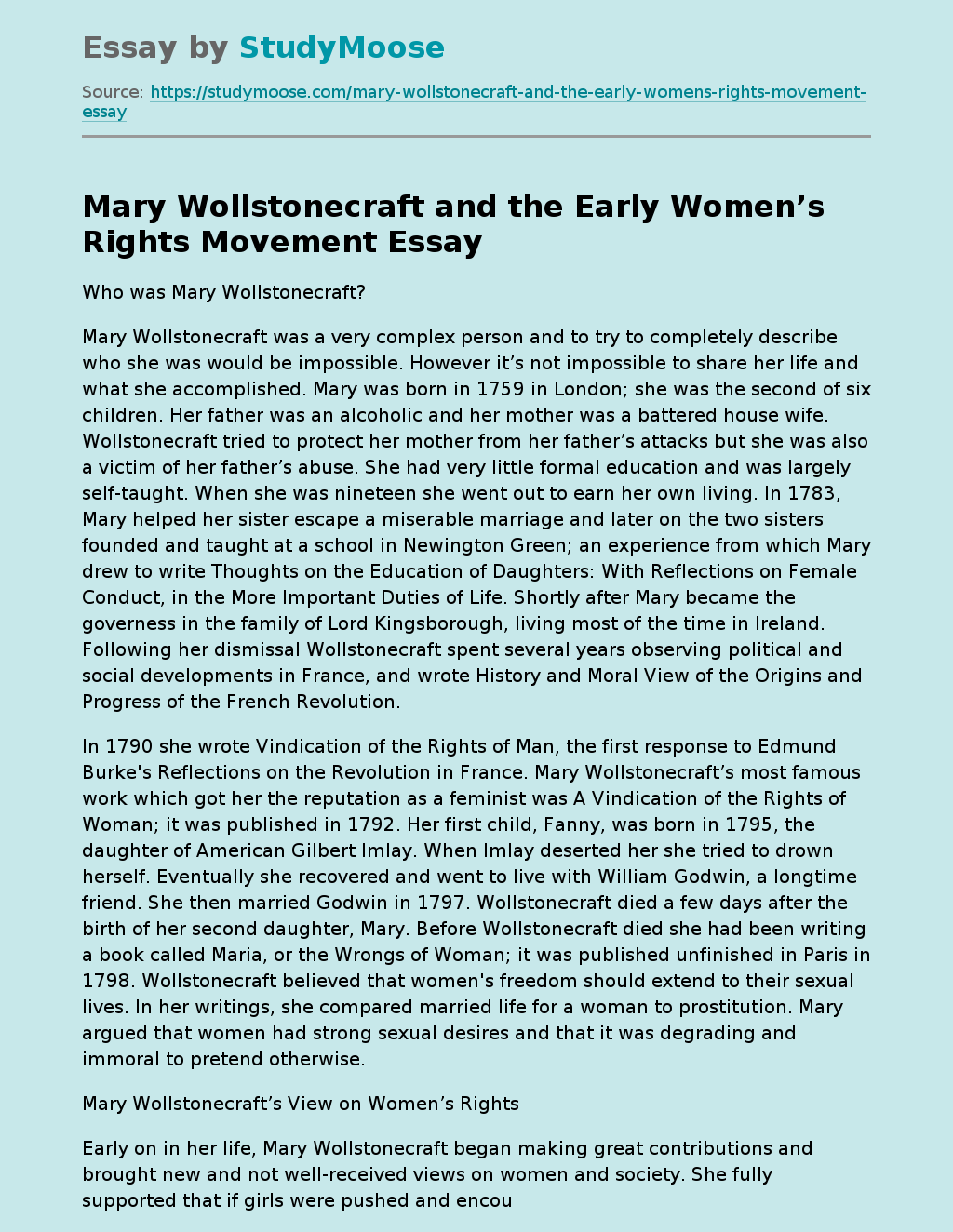