Wollstonecraft, Austen and Goethe on women and love

The late 18th and 19th century was the beginning of a phenomenon which now is referred to as the Enlightenment period. Philosophers globally shared ideas and knowledge on various theories and began a new way of thinking on issues which previously had been swept aside and were considered taboo topics. The concept of feminism is both a political and intellectual movement. It is a form of seeking justice and equality in genders of all form (Haslanger and Tuana). The issue of feminism was introduced by philosophers and theorists in the early 18th-19th century.

Don't use plagiarized sources. Get your custom essay on
“ Wollstonecraft, Austen and Goethe on women and love ”
Get custom paper
NEW! smart matching with writer

It began to be widely recognised as an issue in society with the introduction of Mary Wollstonecraft theories in her book titled ‘A Vindication of the Rights of Woman which first was published in 1792. Shortly following Wollstonecraft, other theorists at the period also introduced their ideas in relation to the topic of women and such. Jane Austen, a famous novelist introduced the topic of women rights and other feminist ideas in her novels.

The prime multi-selling novel which explored the theme of feminism and love was in her novel ‘Pride and Prejudice’. German philosopher and novelist, Johann Wolfgang von Goethe also explored the topic of woman and love in his work titles ‘The Sorrows of Young Werther’.

When Mary Wollstonecraft wrote her multi-selling foundation books on feminism in 1792 titles ‘A Vindication of the Rights of Woman’ she stated what was and still is fresh, shocking and doubtful still till today’s society. She claimed that sex hierarchy – similar to church or army ranks – was essentially a social aspect not a natural one (Scott).

Basically what Wollstonecraft sought after was equality for middle class woman with males of also the same class. This was mainly in due to her own interpretations having been a woman with a bourgeois background. She believed that a working class female had more dignity than rather a middle class female. What Mary Wollstonecraft wanted to accomplish during her time was the decrease in women’s indolence of body and mentality.

She continuously argued that women at the time were considered to be different to male due to male domination over them and their own obedience with their fitting in with the male control over the role of femininity1. The concept of femininity, Wollstonecraft argued, is an artificial construct. This was one of her many ideas whereby she saw males imposing in whereby she wanted to rid this weakness by gaining control for woman and getting rid with the theme of inequality. Her prime aim was to give woman the right to be human and not win them equal political rights to men. Despite this fact, she was at the head of extreme opinions in relation to education. Her influence on the past generations over the last couple of centuries can be seriously examined by the number of books still written about her. Every account given in relation to the issue of feminism in the world today makes some sort of reference to the ‘Vindication of the Rights of Woman’.1

Jane Austen, very popularly known for her work in relation to woman and love is very often thought to be a feminist. That is not the traditional view which has always been perceived but once this question has been raised it is a question which needs to be given serious consideration (Robens). Pride and Prejudice (1813), is one of the most high selling popular love stories ever known in the English literature. It is the story of the relationship shared between Darcy and Elizabeth. As in any other love story, the central characters to the story have to overcome barriers and other problems about themselves before the story can have a happy ever after. Austen in the novel Pride and Prejudice not only shows the pride and the prejudice of the love affair of Darcy and Elizabeth but also shows a cynical approach to love by the relationship of Charlotte and Mr Collins who Charlotte marries only for his wealth.

However on the other hand, Austen through her main characters to the story presents to the reader that true love is an element excluded from society and one that can be conquered even with the most difficult periods. Another important fact which Austen was a keen observer on throughout her novels was the fact of a woman’s reputation and how she was seen in her society. A woman must behave in a certain manner once she is in the outside domain if she steps out of these social norms it makes her vulnerable to judgement from the society she lives in and will result in her isolation and degradation within her community. Austen treats reputation of a female in this novel very seriously especially when Lydia elopes with Wickham and lives with him out of wedlock. The happy ending of Pride and Prejudice is very emotionally pleasing, but in many ways it leaves the theme of reputation, and the importance placed on reputation, unexplored (Douthat).

Johann Wolfgang von Goethe published his first novel ‘The Sorrows of Young Werther’ in 1774. The story unfolds as a biography by Werther writing letters talking to his friend Wilhelm about this girl Lotte he’s met at a party. The reader becomes the ‘Wilhelm’ to the letters which Werther is writing as they are assigned the role of been the addressee. The letters and extracts then go on to tell the tale going on between the two central characters of Werther and Lotte, who is engaged to a work colleague of Werther by the name of Albert. Werther falls in love with Lotte and together they have a hopeless love affair which eventually in the end results in the tragic suicide of Werther leaving behind the archetype of the Romantic Romeo hero figure. Unlike the work of Wollstonecraft and Austen, ‘The Sorrows of Young Werther’ is written from a male’s perspective and is very different indeed to the work of the other two authors at the time.

A male’s version of a love story always has a stronger hold on the viewer and keeps them enticed in the story similarly to another famous male writer William Shakespeare who also wrote many tragic love stories in the 16th century. Following the reading of the novel by Goethe and making a comparison into his life, it is not hard to realise that the story is indeed parallel to his own personal life experiences. Werther chooses suicide as his means of escaping his ‘pain’ from losing and not been able to have Lotte. His life and love for her cannot go on as long as she will be with Albert. His doom is there and then founded as he cannot possibly have another girl but her, cannot possibly love any girl but her.

As his unconditional love can not hope to find fulfilment in the moral and social framework of the late 18th century and due to Lotte’s refusal, the desire for death constantly grows within Werther. It was very rare in the 18th century for a male to hold a woman so highly and importantly as Werther does in his letters to Wilhelm. It is this key fact which separates the work of Goethe from other philosophers at the time of the enlightenment. By the character of Werther and the very high comparison to his own personal experiences it is understood why he wrote the story of the ‘Sorrows of Young Werther’ as once a heart has been sincerely broken by the one we love, the easiest road assumed is the road of demise, which is the path in which Werther took and Goethe himself contemplated also at the time (Wahler).

Thus, each Austen, Wollstonecraft and Goethe had a different idea on what woman rights and expectations are and each depicted the society and experiences they lived in differently. Whilst Wollstonecraft argued for equality, Austen focused mainly on the expectations of woman in regards to family, and love. Goethe on the other hand did not argue for women’s rights or for their expectations, he was merely re-telling a personal story through the use of fictional names and talking about love and what the pain felt like in the time he was in. The issue of woman rights and love can be concluded has originating from the beginning of time. Society has changed and adapted since then but the foundation of feminism dates back to the time of the enlightenment.

The struggle for an independent life for woman as Austen and Wollstonecraft both sought for against the widespread culture of females dependence on males can be seen as the legacy and insight that woman in the future generations can follow in suit 1. Goethe’s interpretation of love and woman is from a male’s perspective and his idea of woman is obviously very highly regarded as by the means of the way he in no means whatsoever disrespects woman and has Werther refer to Lotte in his letters to Wilhelm always in the most brilliant manner. Although woman rights have progressed in the past decade or so as a result of modernity it is still obvious that inequality in field areas such as workplace is still highly evident in regards to gender discrimination.

Wollstonecraft, M (1792) ‘A Vindication of the Rights of Women’ from A Wollstonecraft Anthology. NY: Columbia Uni Press (1990).

‘Why were the ideas of Mary Wollstonecraft important’ http://www.geocities.com/CapitolHill/Congress/1346/woll.htm [Date Accessed: 7/06/2004]

1 ‘Why were the ideas of Mary Wollstonecraft important’ http://www.geocities.com/CapitolHill/Congress/1346/woll.htm [Date Accessed: 7/06/2004]

Wollstonecraft, Austen and Goethe on women and love. (2021, Oct 23). Retrieved from https://studymoose.com/wollstonecraft-austen-and-goethe-on-women-and-love-essay 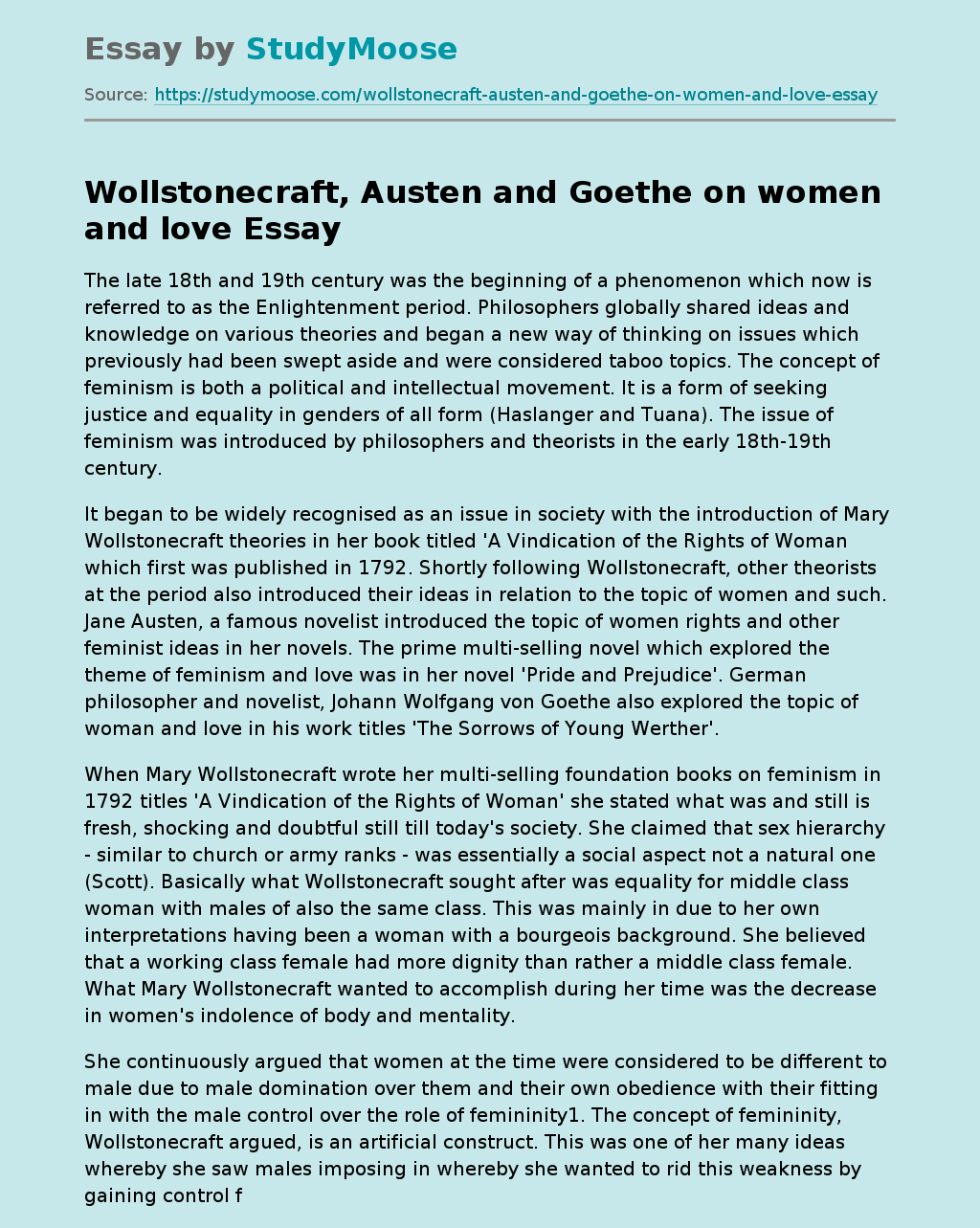