Representation of Love and Marriage in Pride and Prejudice

Although love is considered significant in the world we live in now, it was not the case in the 18th century- Austen’s time. As time progressed, so did education, fashion styles, medical practises and most importantly social constructs and values. Love and marriage in Austen’s century, though it had some similarities, it was considerably different. Pride and Prejudice, a romance novel by Jane Austen, first published in 1813 depicts the manner of marriage and love in the Regency era. It is a story of transformation, in which the protagonist, Elizabeth Bennet and her counterpart change to believe that love does transcend all things.

Don't use plagiarized sources. Get your custom essay on
“ Representation of Love and Marriage in Pride and Prejudice ”
Get custom paper
NEW! smart matching with writer

The novel delves into the passion and excitement of love, but also the detachment that exists between loveless couples.

Marriage in Austen’s time can be described as a business transaction. For the women, the man’s income was all they could depend on. And usually for men, the women’s dowry or ‘portion’ would be taken under consideration.

In Pride and Prejudice, the marriage between Wickham and Lydia was purely based on money, and perhaps Lydia’s foolish adoration towards Wickham. Wickham married Lydia for the money, which he lacked. Before their matrimony Mr Gardiner stated in a letter “They are not married, nor can I find any intention of being so,” however after there was a discussion between Darcy, Wickham and Mr Gardiner regarding the ‘payment’ behind their marriage Wickham was more than ready to marry Lydia. Mr Darcy was willing to pay off all Wickham’s debts and give them another thousand pounds if Wickham was to marry Lydia, and Wickham would only marry Lydia if those conditions were provided to him- this is a marriage completely based on a monetary deal.

Furthermore, the narrator says, “Wickham still cherished the hope of more effectually making his fortune through marriage.” This clearly shows that not only women, but men also gained financial means from marriage. Another
example in the text where marriage is represented as a business deal is when Colonel Fitzwilliam states, “there are not many in my rank of life who can afford to marry without some attention to money.” Austen uses dialogue, to reinforce the fact that marriage is money and the bluntness of Austen’s choice of words results in the reader of the modern era to be strongly opposed to what marriage use to be. The novel represents marriage as a business trade, shown by the relationship between Wickham and Lydia. Each gains wealth from the other, and not care, trust or love- the morals of a marriage in today’s society.

Men looked for women who had many ‘accomplishments,’ not necessarily if they loved them, or if they were intelligent or had good personalities. “A woman must have a thorough knowledge of music, singing, dancing, drawing, and the modern languages…,” stated Caroline Bingley. Not only accomplishments were to be perfected, men looked for beauty as well. In the case of Mr Bennet, he followed the social trend where he married based on appearances and accomplishments. Mrs Bennet was a beauty, however she turned out to be a frivolous, foolish and oblivious character, resulting in an inharmonious marriage. A woman in a marriage was about presentation, to be beautiful and accomplished- to not embarrass the husband. Therefore men did not search for their soul mate, but rather a woman who was presentable. Not only did Mr Bennet marry to a beauty, it is also the case for Mr Bingley who loved Jane for her beauty. Austen represents marriage to be decided on by a woman’s charm and accomplishments, in order to win a man’s heart a woman had to be talented in all the art forms. To be accomplished was a vital requirement for women.

Marriage for women is represented as their ultimate goal in life, because it was impossible to live independently- especially the women who belonged to the genteel class. Genteel women were not allowed to pursue professional careers or university degrees. The only accepted occupation was to be a governess, however they were not highly respected. Consequently, women depended on marriage to have money of which men would be the one who provided it. Charlotte Lucas did not, “think highly either of men or of matrimony, marriage had always been her object…” and that was the reason for
her to marry the pompous Mr Collins. Charlotte did not love Mr Collins, she was twenty-seven and still dependent on her family- the only goal she had was to be married, and she was desperate. For women to be dependent on family was something to be ashamed of and the only way to escape out of under the protection of family was to marry. Using characterisation, Austen represents marriage as the most important event, the only respectable option for women. Marriage was a must for those living in the regency era, unlike today, where living independently is accepted and even encouraged.

Not only was marriage from the Regency era different from today, so was the concept of love. Love was not sought for in Austen’s time, rather it would just be convenient if you were really in love with your fiancé. Pride and Prejudice represents love as an unnecessary asset in a relationship. It is not required to love someone, in order to be with him or her and even be married with them. In the case of Charlotte and Mr Collins, love was not apparent. After Charlotte accepted Mr Collins’ proposal, the narrator states that, “his attachment to her must be imaginary.” Charlotte did not love Mr Collins, but accepted his hand in order to obtain a comfortable home. She was not looking for love to be happy, she wanted social security, which could be provided by the clergyman. Charlotte’s view on love represented society’s view, which is that love is not a vital component of marriage, but rather gaining financial security. The absence of love within a marriage was acceptable.

Another type of love was radical, new, true. Mr Darcy and Elizabeth represented true love, though it was formed from misunderstanding and disagreeable first impressions. Love grew despite the differences; Austen’s protagonists are in true love, the type of love where they can conquer all things. Elizabeth, “…with tears in her eyes [replied], ‘I love him,’” though her pride influenced her to misjudge Mr Darcy she overcame her wall of prejudice and was deeply in love him. Similarly with Mr Darcy, he disregarded his embarrassment and preconceptions and confessed his love for Elizabeth. Austen composed the two central characters to fall in true love, implying the idea that true love is the better and more rewarding. Elizabeth did not totally conform to the social constructs, she was self-reliant and
romantic- she wanted love, unlike Charlotte who wanted a comfortable life. And because she did not follow the ways of conduct books, she was rewarded with true love. Though the two characters were deeply in love, they were not hopelessly in love, another radical aspect of the relationship between Darcy and Elizabeth. Mr Darcy confessed to Elizabeth that he,” ardently admire and love you [Elizabeth].” He uses the word ‘admire,’ showing that there is respect and equality between the two, Mr Darcy did not love Elizabeth only on her appearances but of her ‘impertinence’ and ‘liveliness of your mind.’ Love, in Elizabeth and Mr Darcy’s case is represented as the first step towards eternal happiness, it is the ideal marriage with a balance of emotion and rationality.

Both the social and radical perspectives of marriage and love were represented in Austen’s Pride and Prejudice. Through Jane and Bingley, Charlotte and Collins and Lydia and Wickham the social standard of marriage is presented. And through Elizabeth and Darcy, a new outlook of marriage and love was formed. Today’s society revolves around love, but in Austen’s time finding marriage was far more crucial. Jane Austen renews the ideas of love and marriage and re-presents them by moulding them with her values. Though she writes in the romance genre, she ventures away at times to create her idealistic true love. In conclusion, marriage is represented as a business transaction, love may be thoughtless but to find true love is to fall in love with ones personality and not only their appearances. Austen believes that marriage is based on the strong foundation of true love and intellectual unity within the marriage.

Representation of Love and Marriage in Pride and Prejudice. (2016, Apr 03). Retrieved from https://studymoose.com/representation-of-love-and-marriage-in-pride-and-prejudice-essay 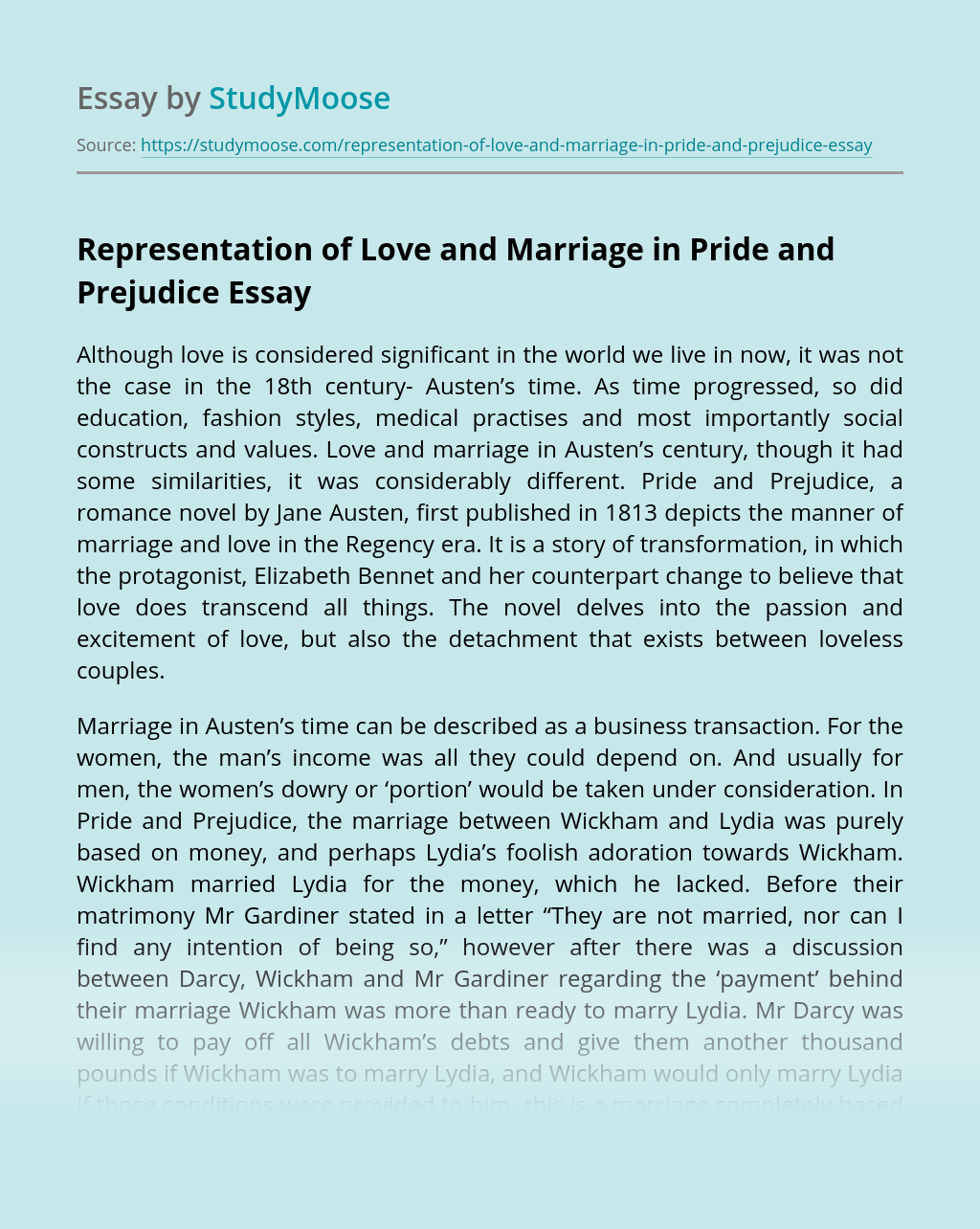