How does Austen use contrasting characters in Pride and Prejudice? Essay

How does Austen use contrasting characters in Pride and Prejudice? (Part B question) Jane Austen uses contrasting characters in ‘Pride and Prejudice’ to highlight her characters traits, both good and bad, and comparing them to others, and by doing this she can shape the plot of the novel. One obvious contrast in the novel is that of Mr Wickham and Mr Darcy and is used to build tension in the plot and convey Jane Austen’s message of being too judgemental.

Don't use plagiarized sources.
Get Your Custom Essay on How does Austen use contrasting characters in Pride and Prejudice? Just from $13,9/Page

When we, and the characters of the novel, are introduced to Wickham for the first time we see him in an extremely good light because of the overwhelmingly positive description of his ‘gentlemanlike appearance’, ‘perfectly correct and unassuming’ manners and everyone in the communities good opinion of him.

This contrasts to when we first meet to Darcy who is instantly ‘discovered to be proud, to be above his company and above being pleased’. This is judged by Elizabeth as well as the whole community; the effect of this is that as a reader we are instantly prejudiced against him and have a very low opinion of his character from the start.

However this view is challenged by Austen’s use of a casual narrator that can switch from the, more usual, point of view of Elizabeth to the view of the Bingly’s and Mr Darcy at Netherfield, which shows Darcy in a better light than we previously saw him. We go from hearing his outrageously rude manners at the ball; saying ‘there is not another woman in the room whom it would not be a punishment to [him] to stand up with’ to the narrator informing us that ‘he began to find it was rendered uncommonly intelligent by the beautiful expression of her fine eyes’.

However the most drastic alteration of our view of him comes in Volume two of the novel, when we find out about Wickham’s true character and how much of a fraud he is, and the repercussions of this for the Darcy and Bennet families. Austen uses these characters and their contrasts in order to highlight one of the main themes of the novel; first impressions (which was originally going to be the name of the novel) and how wrong they can be, because after judging Darcy and Wickham at two ends of the spectrum with little information, the reader, and the characters, find out that actually, not only were we wrong, but they turn out to be exact opposites of who we expected, and the significance of this is shown to us by the drastic effect on the plot-line that the characters judgements have. Another influential character contrast that Austen creates is that of Jane and Elizabeth Bennet.

This contrast is important to the novel because it highlights the other main theme and message that Austen is putting across; Pride and Prejudice. In the novel Elizabeth is a drastic contrast to her sister Jane because of the prejudice attitudes she shows throughout when she judges people, and sometimes rightly, on her first impressions, and then it too proud to change these opinions, until it is too late; in the case of Wickham and Lydia. This is shown to us from the very start of the novel although we do not immediately pick up on the dangers of this. Elizabeth first shows her pride when she says that Darcy’s pride ‘had mortified [hers]’ when he called her ‘tolerable, but not handsome enough to tempt [him]’, and she holds this against him for the majority of the rest of the book.

She is also very sceptical of the Bingly sisters from the very start, although she knows little about them besides her judgement that ‘their behaviour at the assembly had not been calculated to please’. This contrasts to Jane’s blind trust of everybody, which, although sometimes proves itself a bad thing, it does show that she is a far kinder person than Elizabeth, always thinking the best of people; ‘to take good of everybody’s character and make it still better, and say nothing of the bad – belongs to [Jane] alone’.

Sometimes her judgement is portrayed to us as a positive aspect of Lizzy, showing she is smart; for example when she deduces Collins’ character after just reading his letter, however it goes to extremes though the novel; for example when she believes Wickham’s twisted story of Darcy because she has already judged Darcy badly for the sole reason that he insulted her when they first met. Occasions like this, when Jane ‘would not wish to be hasty in censuring anyone’ portray Austen’s message that we should not judge people on our first impressions, or hold our pride against them, and show us her clever use of contrasting characters to develop theme.

How does Austen use contrasting characters in Pride and Prejudice?. (2016, May 21). Retrieved from https://studymoose.com/how-does-austen-use-contrasting-characters-in-pride-and-prejudice-essay 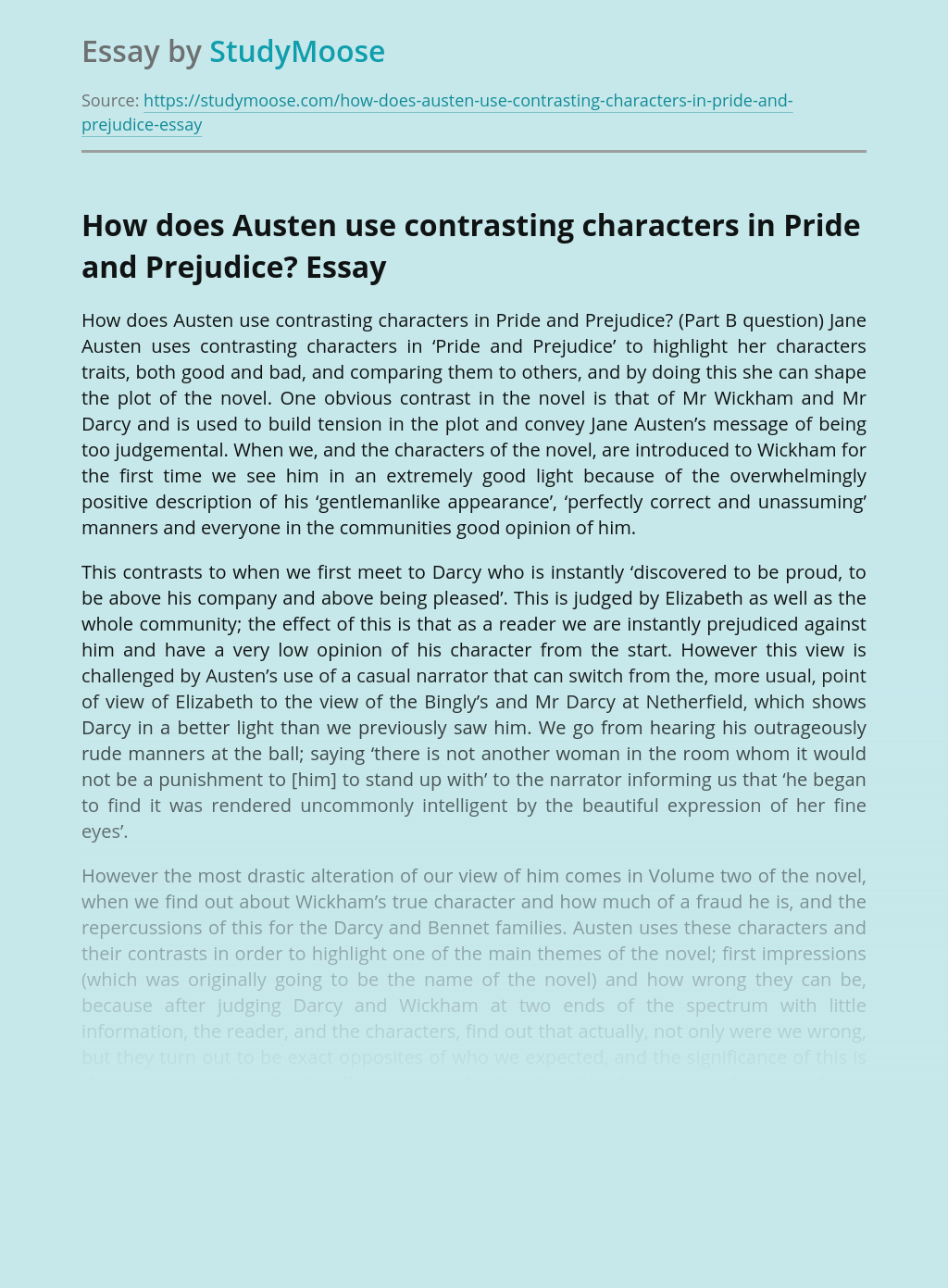 Social work is a personal dedication, not a business responsibility. Social work, in another word, indicates doing something that is significant for the well-being of the individuals who are in requirements. To involve or not to include in a social work depends upon our own decision, not a business’s decree. Social Solutions is specified as... VIEW ESSAY

Family business are businesses that are created from their founding fathers of that era, if may evolve from small businesses into big enterprises. Family business is playing a very important part in the economy of Malaysia; the reason is that more than half of the Gross Domestic Product of Malaysia is from the family businesses... VIEW ESSAY