In Jane Austen’s Pride and Prejudice, the theme of appearance versus reality is recurrent. Austen seeks to prove that often one’s appearance hides one’s true character. This thematic concept is clearly evident in the case of Mr. Darcy and Mr. Wickham and how they appear to Elizabeth Bennett. From her first impressions of both Mr. Darcy and Mr. Wickham, Elizabeth comes to misguided conclusions about their true character. Elizabeth spends most of the novel reevaluating her stance regarding both of these characters.

Don't use plagiarized sources. Get your custom essay on
“ Jane Austen’s “Pride and Prejudice” Appearance vs. Reality ”
Get custom paper
NEW! smart matching with writer

She later comes to realize that her respective judgements of Mr.Darcy and Mr. Wickham are profoundly inaccurate and incorrect. In Jane Austen’s Pride and Prejudice, Austen demonstrates that reality of an individual’s true character can often be hidden by appearances.

Elizabeth’s first impressions of Mr. Darcy are based on an appearance of his character rather that a realistic assessment of his decorum, background, and history. The very first time Elizabeth meets Mr.

Darcy she becomes prejudiced toward him. Elizabeth is introduced to Darcy at the Meryton Assembly and although the general impression is that he is quite handsome, her opinion suddenly changes to an unfavorable disposition towards him. She perceives his behavior as cold and uninterested in her friends and family. Along with the rest of the people in Hertfordshire, she decides that he is ” the proudest, most disagreeable man in the world” (41). His air of superiority does not impress Elizabeth and she observes that he does not converse with anyone who is outside his party.

She grows particularity hostile towards Darcy when she overhears him say,” She [Elizabeth] is tolerable, but not handsome enough to tempt me” (42). Elizabeth comes into contact yet again with Mr.

Darcy when Jane Bennett becomes ill while visiting Mr. Bingley and Elizabeth goes to stay with her at Netherfield. Elizabeth’s dislike of Darcy’s stoic and unfriendly manner increases; while spending time with the Bingley party. Elizabeth believes every single move of Darcy to have ill intentions. She notices Darcy frequently gazing at her and concludes “she drew his notice because there was something about her more wrong and reprehensible, according to his ideas of right” (86). Elizabeth is blinded of Darcy’s true character, which is hidden by his appearance. She is unable to sense Darcy’s real feelings because his introverted demeanor does not allow him to express them. Elizabeth’s blindness is blatantly obvious when Darcy asks Elizabeth to dance and she denies by saying:

“You wanted me, I know, to say ‘yes,’ that you might have the pleasure of despising my taste; but I always delight in overthrowing the kind of scheme, and cheating a person of their premeditated contempt. I have, therefore, made up my mind to tell you, that I do not want to dance a reel at all- now despise me if you dare (86). At this point in the novel, any contact Darcy attempts to make with Elizabeth is brutally rebuffed because of her strong prejudice towards him.

Contrary of Mr. Darcy, Elizabeth’s first impressions of Mr.Wickham are favorable. Mr.Wickham differs from Mr.Darcy in many ways. When Elizabeth first takes notice of Wickham at her Aunt Phillips’ house, she believes him to be “far beyond” the other officers in the militia ” in person, countenance, air, and walk” (115). Wickham is outgoing, lively, and eager to fall into conversation. Wickham’s outgoing and polite mannerisms are quite the opposite of Darcy’s, and Elizabeth takes an immediate interest to him. Compared to Darcy, Wickham appears to Elizabeth as one of England’s finest gentlemen. A further example of how Elizabeth is blind to reality is her firm belief in Mr. Wickham’s claims against Mr. Darcy. Wickham’s appearance as a stately gentleman and Elizabeth’s prejudice towards Darcy cause her to believe Mr. Wickham’s slander against Darcy even though she knows nothing of Darcy’s past.

She regards Mr. Darcy as a proud, pompous brute, so she is willing and eager to find fault in him. Wickham provides this fault and justifies her already hostile feeling towards Darcy. This aggressively hostile behavior of Elizabeth toward Darcy is intensified at the Netherfield Ball. Elizabeth feels anger towards Darcy because she believes him to be the cause of Wickham’s absence. Elizabeth’s predisposition to favor Wickham is noted by Mrs. Gardiner who warns Elizabeth that she has heard rumors of Wickham’s greedy character and to be careful of placing too much trust in him. At this point in the novel Elizabeth regards Wickham as a friendly and resourceful man who confirms her bitter feelings towards Darcy.

Darcy’s proposal to Elizabeth is perhaps the grandest example of how Elizabeth is blinded by appearances. When Darcy proclaims his love for Elizabeth, he opens up his heart the only way he knows how, only to see Elizabeth take offense to his offers and turns him down. Elizabeth is unaware of Darcy’s history and doesn’t understand his particular social status. She thinks his reasons for debating over marrying her are inconsequential. She also does not understand what sort of shame he is risking in seeking her as his wife and takes offense to Darcy’s words about her family. Elizabeth is unaware of the outside forces, such as Lady Catherine de Bourgh and Miss Bingley, acting upon Darcy. His statement “In vain I have struggled. It will not do. My feelings will not be repressed” (236) appears rude to Elizabeth, when in actuality it is admirable and valiant. Elizabeth sees the proposal as an insult when in actuality it is Darcy sacrificing his pride and proclaiming his utmost devotion to her.

The turning point in the novel in which reality begins to override appearance occurs when Elizabeth reads Darcy’s letter. In this letter Darcy tells his side of the story regarding his relationship with Wickham and provides verifiable information to substantiate his character. Not only does he prove that he did not act maliciously towards Mr. Wickham, but he also explains that he never had any intent to hurt Elizabeth’s sister Jane. He explained that he was not confident that Jane truly loved Mr. Bingley and was only looking out for a good friend. After reading and rereading this letter, Elizabeth reevaluates her previous feelings of both Darcy and Wickham and her opinion of both men gradually changes.

With the crucial knowledge she gained from the letter, she pieces the puzzle together. Elizabeth now begins to admire Darcy when she visits his exquisite home and takes notice of Darcy’s affection when she meets him at Pemberly. Wickham is proven to be fraudulent and Elizabeth sees now that his intentions were dishonorable and his actions not proper when telling her lies about Mr. Darcy. She sees now that Wickham is a greedy and ungrateful man who has repeatedly taken advantage of Darcy financially. His deceitful character is only confirmed by his scandalous affair with Lydia Bennett.

By the end of the novel, the true character of these gentlemen is evident to all. Elizabeth Bennett regrets ever having admired Wickham, and embraces
Darcy as her true love. It is clear to Elizabeth that Wickham’s smooth manners and outward style conceals a shallow, superficial, and greedy soul, while Darcy’s awkward behavior hides a generous, caring heart. Elizabeth learns many lessons from her interaction with these two men. She learns the possible dangers of jumping to a conclusion based on an individual’s character and looks that may be deceiving. Through Elizabeth’s realizations, Jane Austen offers a universal theme that can be related to any society in that premature judgements are more often than not a misconception of someone’s true personality. In Pride and Prejudice, Jane Austen effectively exhibits that reality can often be hidden by appearance. 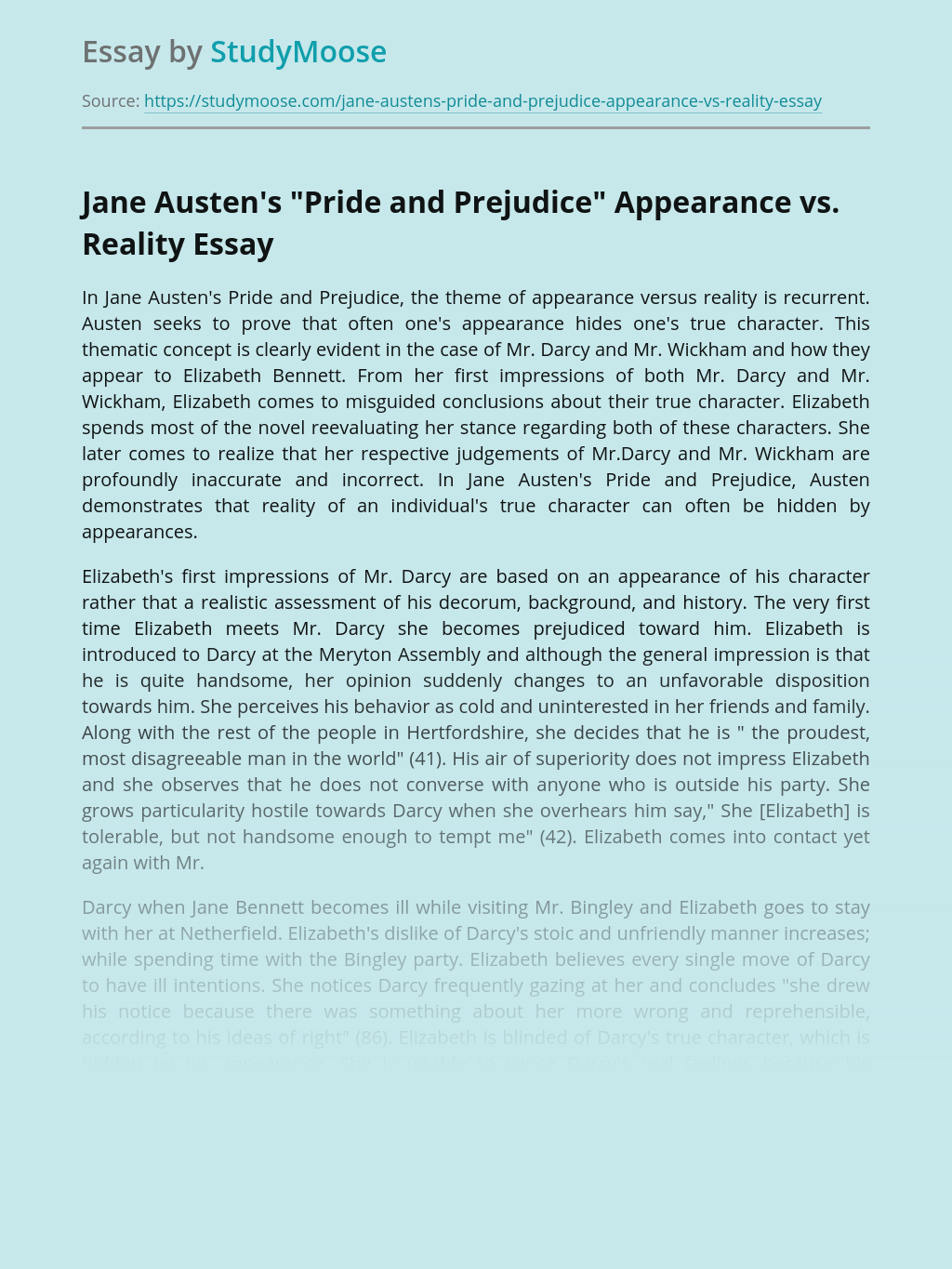