Mary Wollstonecraft, Writer of the Enlightenment

Mary Wollstonecraft was a writer of the Enlightenment and her work, A Vindication of the Rights of Women, is a perfect example of a piece of literature of the time. She took a topic, women’s rights, and applied to it the reason and logical thinking that was so important during the Enlightenment. Very important in Wollstonecraft’s work is the gritty realness and harsh reality of the writing itself. While Romanticism loved to use sweet phases and pretty words, Wollstonecraft spoke plainly.

Don't use plagiarized sources. Get your custom essay on
“ Mary Wollstonecraft, Writer of the Enlightenment ”
Get custom paper
NEW! smart matching with writer

She used hard hitting ideals, such as women were “rendered weak and wretched” by following the manners men required of them.

The reason she was so brutal was she wanted to incite reform. Enlightenment writers presented their rational ideals, well thought out and explained, in an effort to persuade others to agree. Wollstonecraft relied on more than just her rational argument, but on the strength of her words. She believed, “From the tyranny of men the greater number of female follies proceed”, and she had made it her mission to change that.

Another very important goal of the Enlightenment writers was to promote change. They wanted to strip away all the prettiness and write about the truth.

They intend their works not as entertainment, but as ideals which not only made people think, but encouraged them to take these ideals and change society. It was the same with Wollstonecraft, and she was working against major barriers to create her change. First of all, men would not agree with her radical ideals and men controlled the society, especially the intellectual society.

Also, many women believed their lot in life was fine and they didn’t agree with Wollstonecraft insulting it so much.

However, Wollstonecraft had a goal, “I wish to persuade women to endeavor to acquire strength.” She desired not only strength, but the same right as men to be rational, and for it she is considered the “mother of modern feminism. ” “The Autumn,” has nothing of the fierceness and determination of A Vindication of the Rights of Women. While Vindication is a battle call, “The Autumn” is a lulling of the senses and a poem that encourages people to think of happiness and not the facts of life. Imagery is all important in “The Autumn” and the images in the poem work to summon up thoughts Keats wants to connect to the season, fertility and beauty.

Fertility is a continuing theme in the poem, brought out by such phrases as “fill as fruit with ripeness to the core,” and “plump hazel shells with a sweet kernel”. After all, autumn is the season of harvest and Keats uses the images of the coming harvest to invoke in the reader a sense of the glory of the time. Another theme very present in the poem is the theme of the beauty of the season. Keats uses various phrases which uses not only the sight but the hearing to experience the glory of autumn.

For sight, Keats uses such phrases as “and touch the stubble, plains with rosy hue”, and “while barred clouds bloom the soft-dying day”, to create with words a vision so strong the reader ‘sees’ it in the mind’s eye. As for hearing, Keats writes of the sounds of the season to take the reader back to that time of year. “The red-breast whistles from a garden croft” and “full grown lambs loud bleat from hilly bourn” calls to the reader in images that go from just words to almost hearing the birds and lambs as they call.

In this way, imagery doesn’t just prompt ‘seeing’ autumn, but ‘hearing’ it as well. Keats also gives us a depiction of a woman. But, while Wollstonecraft paints the picture of a silly creature that is ridiculous and bound, Keats gives her an almost unearthly beauty. She is spirit-like, with “hair soft-lifted by the winnowing wind” and soft and yielding, “drow’d with the fume of poppies”. This isn’t a woman ready to fight for equality, but rather a gentle creature that enjoys in her soft world.

Mary Wollstonecraft, Writer of the Enlightenment. (2021, Sep 22). Retrieved from https://studymoose.com/mary-wollstonecraft-writer-of-the-enlightenment-essay 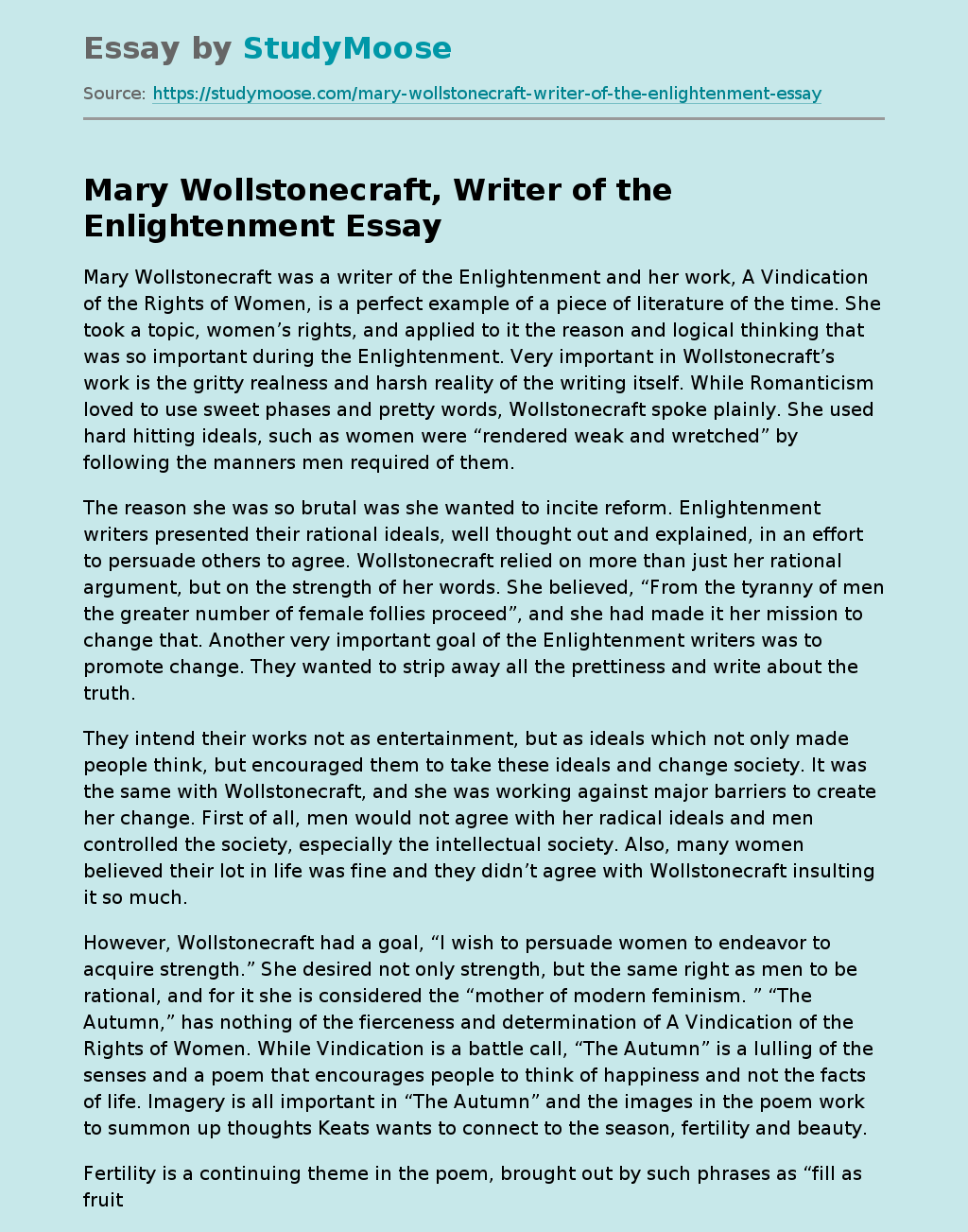