During the early 1930s many black writers begin to produce works that helped to shape and define the Civil Rights movement. Among them was Langston Hughes whose poems and writing contributed directly to the rhetoric of the day and inspired many African-Americans, both in and out of the Civil Rights movement. Much of this grew out of what was called the Harlem Renaissance, which emerged during turbulent times for the world, the United States, and black Americans. World War I and the Bolshevik Revolution of 1917 had left the world in disorder and stimulated anti-colonial movements throughout the third world.

Don't use plagiarized sources. Get your custom essay on
“ Langston Hughes and the Civil Rights Movement ”
Get custom paper
NEW! smart matching with writer

In America, twenty years of progressive reform ended with the red scare, race riots, and isolationism throughout 1919 and led to conservative administrations through the twenties. While blacks were stunned by racial violence near the end of the decade and were frustrated by the lack of racial progress that progressivism had made, they were now armed with new civil rights organizations and confronted the approaching decade with new hope and determination.

Education and employment opportunities had led to the development of a small black middle class, and few blacks thought that their future lay in the economically depressed rural South, resulting in hundreds of thousands migrating to seek prosperity and opportunity in the North. As these more educated and socially conscious blacks settled into New York’s neighborhood of Harlem, it developed into the cultural and political center of black America. It is out of this environment that Langston Hughes developed. In 1926, professor Alain Locke (1969) observed, “The younger generation is vibrant with a new psychology,” which was shown by a shift from “…social disillusionment to race pride.

” Locke noted that this new psychology rejected the old stereotypes of black “aunties, uncles, and mammies” and substituted instead self-respect, self-dependence, and racial unity, and much of that is the core of Hughes writings. Emerging from social and intellectual upheaval, the Hughes and the Harlem Renaissance marked a change in the attitude of blacks in the United States. While the Harlem Renaissance was not a political movement, its participants, including Hughes were affected by the political world around them and responded in varying ways to their political environment.

Perhaps the most direct way that black writers addressed political issues was through political and protest writings, and Hughes made protest a significant element in his works, especially in his somewhat radical poetry of the early 1930’s. In his poem “Mulatto”, Hughes (1994) writes, “Because I am the white man’s son, his own / Bearing his bastard birth-mark on my face, / I will dispute his title to the throne, / Forever fight him for my rightful place.” Throughout his poetry, he directly and indirectly referred to vigorous hatred for the white man, of his people’s dreams deferred too long. He used literature to protest the inequality faced by blacks nationwide. Hughes’ writing put a level of anger into the early Civil Rights movement and he and other black writers felt that black literature could be used as a key weapon in the fight for civil rights.

Hughes, though his writings also incorporated a little bit of communist philosophy in to the early Civil Rights movement, and Hughes wasn’t alone in his ideas. The Bolshevik Revolution of 1917 drew cheers from many black Americans who were thrilled to see a revolutionary organization pledged to racial and ethnic equality and proletariat brotherhood rise up and seize control. Seeing an opportunity to build a strong foundation on black Americans, the Communist Party of the United States pledged itself to encourage social interaction and intermarriage as a movement policy, and the organization proclaimed that African Americans had the right to self-determination in the South. Although the movement never really took hold or was able to sustain itself in America, Hughes and fellow black writer Claude McKay were angered by racial problems in the United States and enticed by the organization’s pledge to uphold equality. Though never an official member of the Communist Party, Hughes, supported communism and defended the USSR through the 1940s. Hughes focused much of his effort into describing the life and experience of the black masses.

He believed that social and racial problems were closely related to class conflicts, and that racial prejudice was only a manifestation of capitalism. In the early 1930s, a radical tone was pervasive in many of his works, especially in his volume of poetry entitled A New Song. One of the poems in the collection, for example, called for workers to rally in revolution with the words (1986): “Better that my blood makes one with the blood / Of all the struggling workers of the world – / Until the Red Armies of the International Proletariat / Their faces, black, white, olive, yellow, brown, / Unite to raise the blood-red flag that / Never will come down!” Because of many his views, and his impact on the black community, the white society of America at the time of the Harlem Renaissance and even years after labeled him as a radical. Interestingly enough, Hughes with his lifelong commitment to racial integration was rejected by 1960s radicals who considered him to be a part of the problem, rather than part of the solution.

While visiting the Soviet Union, Hughes acknowledged the problems the nation faced in letters written back to the United States, but also claimed that he had not seen any traces of segregation or racial prejudice. He then, for a time, began to share the view that literature needed to be viewed in terms of its potential political gain. According to Witz (1988) he wrote that, “Writers who have the power to use words in terms of belief and action are responsible to that power.” Hughes began to insist that writers have to demonstrate an awareness of the social and political realities with which they have to live and to take full advantage of the power and effect that their literature may have. Like McKay, he ultimately rejected Communism because of the absence of literary freedom that he observed. He proceeded to express publicly his disillusionment with communism and loyalty to the United States. Still, as with McKay, one must recognize that the political ideology of communism significantly impacted his works and ideas for a time and that those works and ideas impacted those involved in the Civil Rights movement who were taken up by his words.

In the early 1940s Hughes also established a character in his short story writings named Jesse B. Semple. Through these short stories he used this character to represent the black man of his times. Hughes began writing the, “Simple” stories in 1943. It started as a weekly column in the Negro Newspaper, the Chicago Defender. During the 1940s there were many authors creating poems and stories to try and uplift the spirit of the black community in New York. However, Langston Hughes felt inspired to write about a fictional character, which in he attempted to represent all of the feelings of the black man without being blatant or bold. As Klotman (19??) wrote, “Jesse B. Semple is certainly no romantic hero, protest victim or militant leader, no charismatic character for the young to emulate” yet his influence on the black community and their thoughts about civil rights could not be underestimated. He created Jesse B. Semple, a character that would make an effort to represent the common man.

His characteristics were that he had little formal education, but he had a lot of common sense and could see the truth in many situations. Langston Hughes used Semple and his stories to project the voice of all the black men of that time. Semple touched on issues such as racism, interracial marriages and any other important issues that showed what it meant to be black during that period. Hughes took every issue that he felt was necessary in the accurate representation of the Negro man, and projected through the life of Semple. The events Jesse B. Semple went through in his stories and his opinions and views of what was going on in the world showed a certain irony that the society of that time had for them. With the stories of Jesse B. Semple and his, “simple” life, he captured the mindset of every black man of the 1940s.

Overall, that seems to be Hughes’ biggest influence, that he pictured the black America as black American’s saw themselves and then tried to install hope, and pride and a sense of entitlement into them. In poems such as “I Too”, Hughes dwells upon a theory that blacks had to be separate from others in society. He refers to himself as singing, America and then being America significantly referring to the end of segregation and discrimination. His use of creative imagery shows the kitchen as being a place of distinct yet individual strength. The author implies that by being separated from the rest of society he wasn’t of quality to be among the guests of the house, but never the less he demonstrates how being separate made him more of a stronger human being in accepting what others were, and putting aside the ignorance of others, which also demonstrated and ironic twist to the poem, as well as showing the reader that the speaker was “Proud to be Black”. In addition to those techniques use by the author, he also uses the structure of the poem to set up the reader and show them how the speaker was going from what he is now presently, and what he will accomplish to be in the future. In a nutshell, this is what the Civil Rights movement promised and the fact that Langston Hughes set it all down on paper at the very beginning, makes the influence undeniable.

Klotman, Phyllis R. “Jesse B. Semple and the Narrative Art of Langston Hughes.” 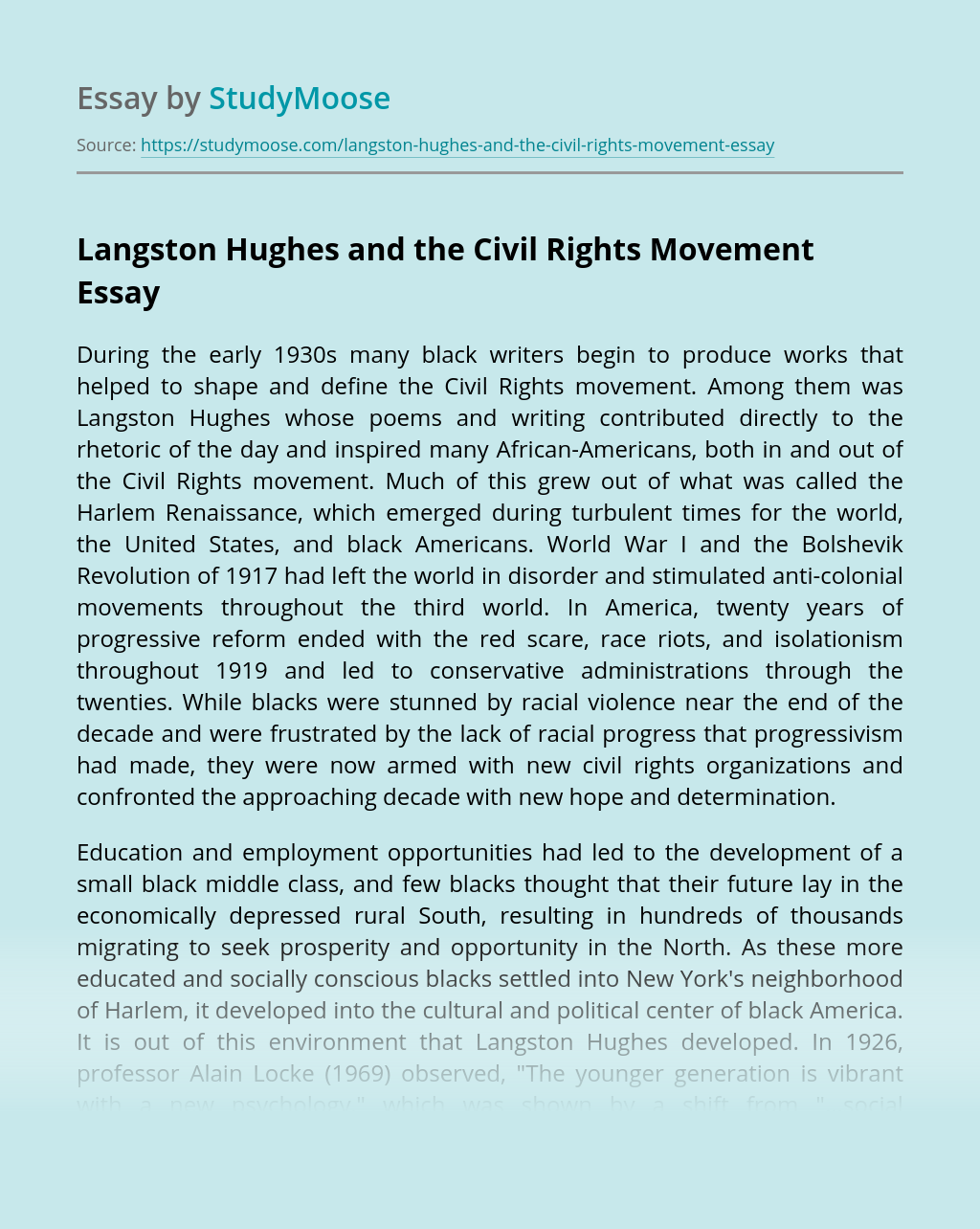