Analysis of a Dream Deferred by Langston Hughes

This poem by Langston Hughes is a very complicated. In it the speaker paints a picture of what might happen to someone’s dream if it is postponed too long. This idea is the overall theme of the poem and it is what unifies and connects each line to the poem as a whole. There are also indirect references that this is not only the dream of an individual, but an entire race’s struggle to achieve peace and liberation. This poem consists of a series of answers to the question, “What happens to a dream deferred?” All of the lines following this first question are presented as different similes.

Turn in your highest-quality paper
Get a qualified writer to help you with
“ Analysis of a Dream Deferred by Langston Hughes ”
Get high-quality paper
NEW! AI matching with writer

The first line of this poem is the most crucial because it develops and sets the direction for the poem itself. It makes the reader think about what happens to a dream when you put it aside for an uncertain amount of time. It is not referring to the dreams someone might have when they are asleep, but rather the goals they have set out for themselves and wish to accomplish.

The word “deferred” was a wonderful way to articulate the idea of a postponed and possibly overdue dream. This line is followed by a series of rhetorical questions that indirectly answer themselves.

The speaker firmly states the idea that delaying any dream could lead to damaging effects. Each line describes what these destructive effects and to what end it could lead. The second line asks if the dream dries up “Like a raisin in the sun.” This metaphor of a dream as a raisin forces the reader to think about the changes that might occur to a dream if it is left alone too long. Does it dry up and wither away? Even though a raisin is already dried, if it is left out in the sun for an extended period of time it would become hard and tough which would make it much harder to enjoy. Thus, if a dream is left to wither or is unused it could shrivel away to something that is no longer useful or capable of being enjoyed. Someone’s aptitude would surely grow stiff and dry up if it was not allowed to be used. This line creates the allusion that if you don’t achieve your dreams they could dry out and leave you feeling unnourished.

As the poem progresses the images and comparisons made evoke more emotion from the reader. The poem suggests that if the dream does not dry up it could “fester like a sore- / And then run.” This creates an image and reminds the reader about the pain that is felt when you are injured. This line means that the dream could become irritating like a fresh sore that you wish would dry up so it can heal, but instead lingers and runs. The uncompleted dreams effects could become frustrating and the external wound would be a constant reminder of the things you have not yet attained. The line “fester like a sore-” creates a tender image and illustrates the exasperating and slow healing process the body must undergo in order to recover properly. This question alludes that when you don’t accomplish your dreams it can be like a sore that never completely heals and always appears fresh.

The damaging effects of not completing your dreams becomes more explicit as the poem progresses. The speaker asks if the dream deferred stinks “like rotten meat.” It reinforces the previous grotesque question and the idea that if you leave a dream out too long it will eventually begin to fester and rot like meat. The idea that a dream has the potential to become rotten is an interesting concept. The dream could begin to rot in the person’s mind or heart, which would cause them to become sick. This line could also be an indirect reference to the lynching that occurred during the speaker’s era. It could be referring to the rancid smell of the dangling lifeless bodies. This reinforces the idea that the speaker is talking about the struggle of an entire race and how important it is to rise up as a group to accomplish your dreams because if anything is left alone too long it will eventually begin to decay. At this point the poem begins to talk about the lighter, but still negative effects of not completing a dream.

The speaker implies that if the dream does not begin to rot it could “crust and sugar over- / Like a syrupy sweet.” This line compares not accomplishing a dream or goal to a sugary substance. If either of these is exposed for too long it would begin to form a rigid and stale crust along the surface. This hard crust would make the substance more difficult to use and could make the dream more difficult to achieve. A dream that is hard and separated is much harder to achieve, and this could lead to feelings of depression. These feelings would make the dream appear more complex and create a bigger struggle for the person to obtain their goals. The other image this line depicts is a scab crusting over. Everyone has or will have some sort of injury that will result in a scab sometime in their life.

This is a powerful image that connects the reader to the image the speaker is trying to portray. Although a scab is not typically thought of as something sweet it eventually crusts over “like a syrupy sweet” and becomes solid. Even though these two images are not typically compared, it reinforces the crusty and hard image this line is trying to convey. This question insinuates that you should savor and protect your dreams so they do not become old, sour, and stiff. They should be preserved properly so that they remain obtainable. In the second stanza the speaker proposes the idea that if the dream does not crust over “Maybe it just sags- / Like a heavy load.” This suggests that not following through with your dreams could weigh you down, which would be another damaging effect. It implies that maybe your dream sags, like when a person is carrying something heavy, causing them to move at a sluggish pace. This unhurried pace could lead to clumsiness, which could cause the load to appear heavier than it really is.

The word “Maybe” reinforces that this line is not a question, but rather a suggestion. This suggestion implies that the dream could become hard to bear due to the mental uncertainty that could lead people to ask “what if” questions. Asking these questions is often a form of self-sabotage because they can never be answered. The development from line to line becomes more intense and graphic as the poem progresses. The last line asks the reader if none of these previous affects have happened, would the dream just “explode.” This word creates an image of a bomb that could cause a great deal of destruction. This idea is the most devastating effect of not accomplishing your dream because not many things are salvageable after an explosion and it is usually used as a last resort. This suggests the idea that if a dream is postponed too long it would eventually turn into a bomb. This explosion could potentially cause more damage to the person than if they had attempted to accomplish the dream and failed, due to the fact that it could never be pieced back together.

After a dream has been shattered it is no longer achievable. This line is more powerful than the others because it has a deeper message behind it. I think it is a threat on the level of the whole race. If a dream is deferred too long, then it could explode into violence. If this occurred, it would do an unspeakable amount of damage to the righteous cause and make the whole race appear barbaric. It could also cause an individual or an entire race to lose hope and “explode” with grief causing them to fall apart and feel helpless. These feelings could make someone feel that suicide is the only escape or might lead them to become more aggressive towards others.

These two ideas are by far the most damaging affects that could happen if you don’t strive to accomplish your goals and dreams. This poem is very intricately woven and pieced together. The speaker uses comparisons in every line to reinforce and emphasize the main theme of the poem. The indirect references added to the overall complexity of the poem. Each line highlights and unifies the poem because every line relates back to the detrimental effects of what could happen if a dream is deferred. What happens to a dream deferred?

Analysis of a Dream Deferred by Langston Hughes. (2016, Oct 07). Retrieved from https://studymoose.com/analysis-of-a-dream-deferred-by-langston-hughes-essay 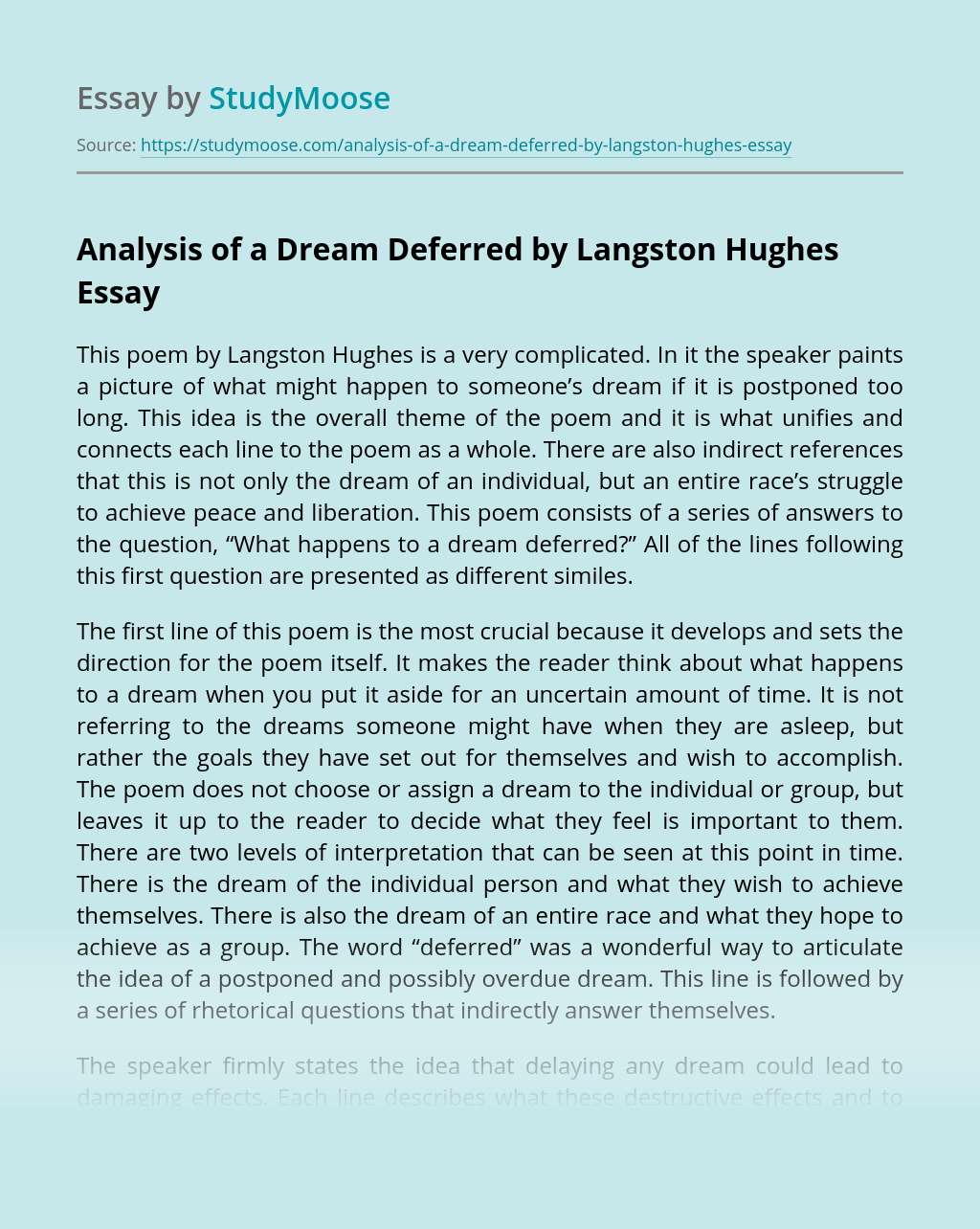 Turn in your highest-quality paper
Get a qualified writer to help you with
“ Analysis of a Dream Deferred by Langston Hughes ”
Get high-quality paper
Helping students since 2015
Stay Safe, Stay Original