A dream cast aside can rankle a person’s will in the deepest of ways. It tends to permeate their every thought and becomes an unshakable burden. In the poem “Harlem (A Dream Deferred)” by Langston Hughes, the language used describes how a suspended goal can frustratingly linger. The writer first poses a question: “What happens to a dream deferred?” He then compares a postponed dream to a dried up raisin or a festering sore, giving a reader the idea of how treacherous it can be to put off one’s goals.

Don't use plagiarized sources. Get your custom essay on
“ Langston Hughes: Harlem a Dream Deferred ”
Get custom paper
NEW! smart matching with writer

What only can make it worse is when we have little control over our fate; when the determination of whether or not our goals are achievable is decided by someone else as was done with the African American population in the United States throughout the early 20th century.  Life for the black population of America throughout the early 1900s was less than ideal. While they’d been free from slavery for nearly 100 years, they remained in segregated schools and were restricted to menial work nonetheless.

Between 1920 and 1930, a movement was followed by African Americans across the United States known as the Harlem Renaissance (see Great Days In Harlem).

The movement aimed to establish an identity for blacks in America and gave many hope that they might be seen equal to their white counterparts. The movement lost momentum, but its ideals remained in the hearts of the people; their dreams of equality left behind to fester in the backs of their minds.

So what happens when a dream such as this is deferred? If it is a true dream, reflecting our hearts desire, it cannot be forgotten easily. Hughes, an African American in the Harlem Renaissance era, writes a poem full of bitter possibilities reflecting his frustration.  Evidently, Hughes felt frustrated when he wrote this poem in 1951. It was 30 years after the start of the renaissance movement, and it seemed to him that the black identity had made no steps toward equality. At this point in time, the African Americans were feeling neglected; their goals cast aside and their lives seeming more like a nightmare than a dream. But what happens to a dream deferred?

Hughes offers many responses to this question, all equally unpleasant. In using similes, the writer creates imagery allowing a reader to imagine a festering sore or a piece of rotten meat and understand how toxic a postponed dream can be for a person.  Equally unpleasant is allowing oneself to “sugar over”, to simply nod ones head and accept the crushing of ones dreams as reality. To be sweet to those who’ve taken away every ounce of one’s dignity can be just as irksome. Then the idea that was once a dream will linger evermore, weighing a person down, sagging like a heavy load. In the final statement of the poem, the writer leaves it as a separate sort of thought, “Or does it explode?”

This final question seems more like a warning, an indication of the author being at wit’s end. A dream deferred can linger so long that a person can no longer bear the load and they may retaliate. In this instance, the writer as well as his fellow African Americans were beyond frustrated with the exhaustion of carrying the load of their unfulfilled dreams. Harlem’s ideals had been forgotten.  From the language used to the thoughtful structure, “Harlem (A Dream Deferred)” speaks to a reader.

The writer creates strong imagery that can be connected to the situation he’s describing. A dream deferred really takes its toll on a person, or as proved by the context surrounding the poem, a group of people. To have ones goals setback is hard enough, but having them dismissed by another simply makes it linger and inflame. We’re brought back to the question of what happens to a dream deferred? As suggested it can rot like meat and dry up like a raisin but eventually we crack under the pressure. There’s only so much a person can take; in the end our deferred dreams will cause us to explode. 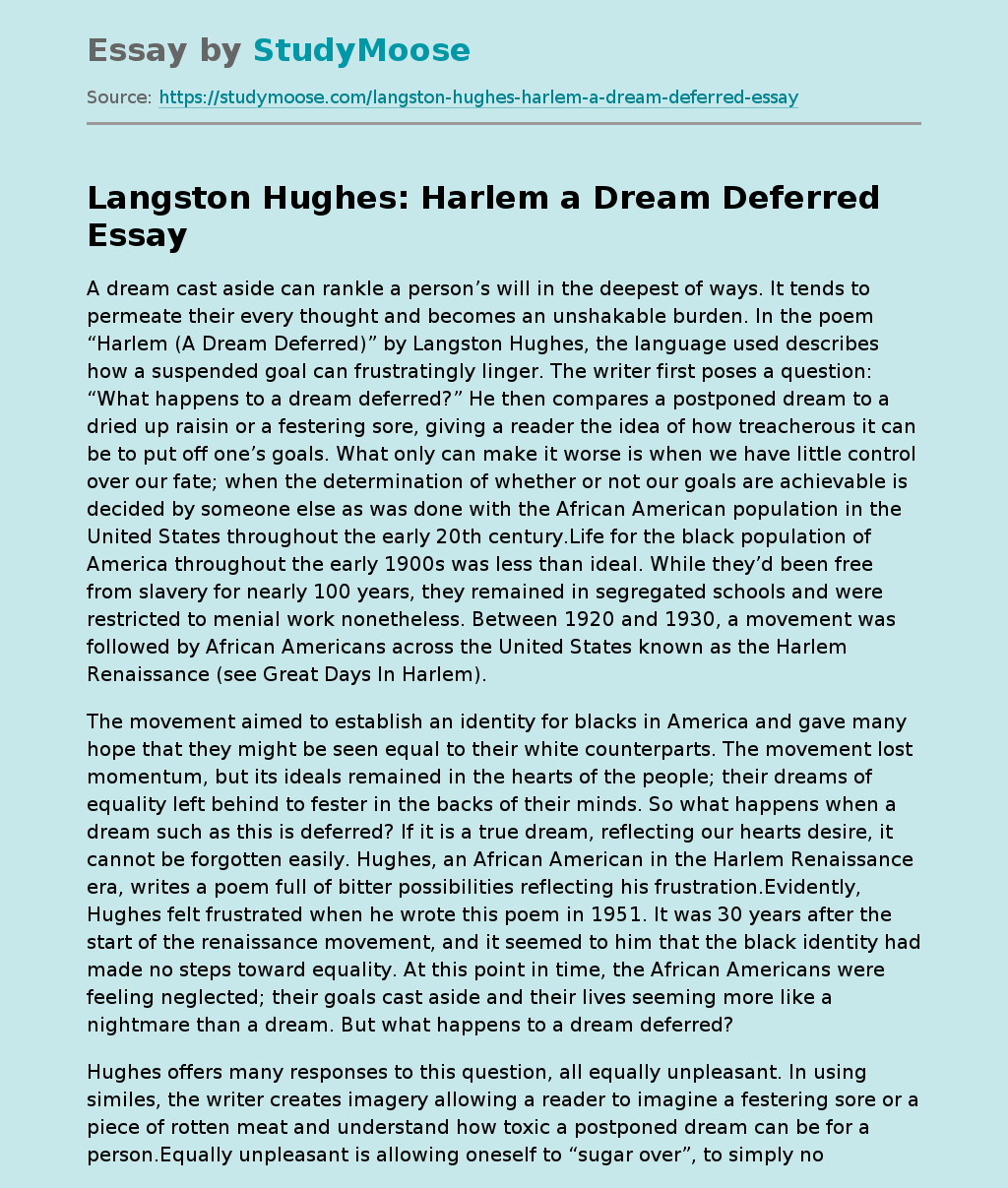