"A Dream Deferred" by Langston Hughes

The poem A Dream Deferred by Langston Hughes basically describes what happens to dreams when they are put on hold. The speaker in the poem originally entitled it Harlem, which is the capital of African-American life in the United States. The title was changed to accommodate all dreams in general, and what happens when people postpone making them come true. The speakers attitude toward the poem is an advice-giving attitude. The poet doesnt want people to postpone getting what they want.

Don't use plagiarized sources. Get your custom essay on
“ “A Dream Deferred” by Langston Hughes ”
Get custom paper
NEW! smart matching with writer

The poem is written in an informative/caring tone to help people live the lives they dream of having.

In the opening of the poem, the poet uses a visual image, which is a simile, to compare a deferred dream to a raisin. The speaker asks the question Does it dry up/like a raisin in the sun? (2-3) This phrase creates the image of a raisin that used to be a firm, moist, and healthy-looking grape that has become shriveled up into a raisin.

The speaker doesnt emphasize the appearance of the raisin, so it isnt as good of an image as the simile. This image gives an emotional effect of a dream deferred shriveling up and turning dark because the sun has baked it.

The words and phrases, Or fester like a sore(4), and Or crust and sugar over(7) are both symbolic of the hard manual labor that African-Americans had during the early 1900s. Maybe it just sags / like a heavy load(9-10) is a great picture of a dream that sits within a person and weighs there making everything else one does never enough.

As the reader puts all of these illusions together, ones own dreams and ideals are brought to the surface just as Hughes brings his poem to a close with style. Or does it explode (11) is the most powerful line of the poem. It is separated from the other lines of the poem and italicized, adding emphasis to it visually. The concept of a dream exploding is a powerful conclusion of what could happen to the poet’s or reader’s dreams if they are pushed aside or unable to be pursued. All in all, this poem is a very universal poem as far as advocating for all types of people.

This poem uses no forms of rhyme or meter, but it does use one form of a sound effect. The one example is the line Or does it explode? (11), in which the word explode gives a strong meaning of sound. The sound affects the sense of the poem by showing that it could all end in a big disastrous bang. The elements that are most important to the poem are the quotes Does it dry up/like a raisin in the sun? (2-3) and Or fester like a sore(4). The elements that contribute least to the poems effectiveness are the quotes And then run? (5) and like a heavy load (10).

The poems title means that people have dreams that they would like to pursue, but obstacles make them keep procrastinating and/or putting them off. The poem means that many people, no matter what race, all have dreams that they would like to have come true, but they just linger around in the back of their minds. I responded to it by agreeing to the whole concept. I have many dreams that I would like to of had come true, but there have been certain obstacles that have gotten in the way. It doesnt remind me of anything in particular, but there are some instances that are similar, such as wanting to drive when I turned 16, but because I took drivers training late, I couldnt. This poem tells me to pursue the dreams that I have if at all possible.

"A Dream Deferred" by Langston Hughes. (2016, Jul 25). Retrieved from https://studymoose.com/a-dream-deferred-by-langston-hughes-essay 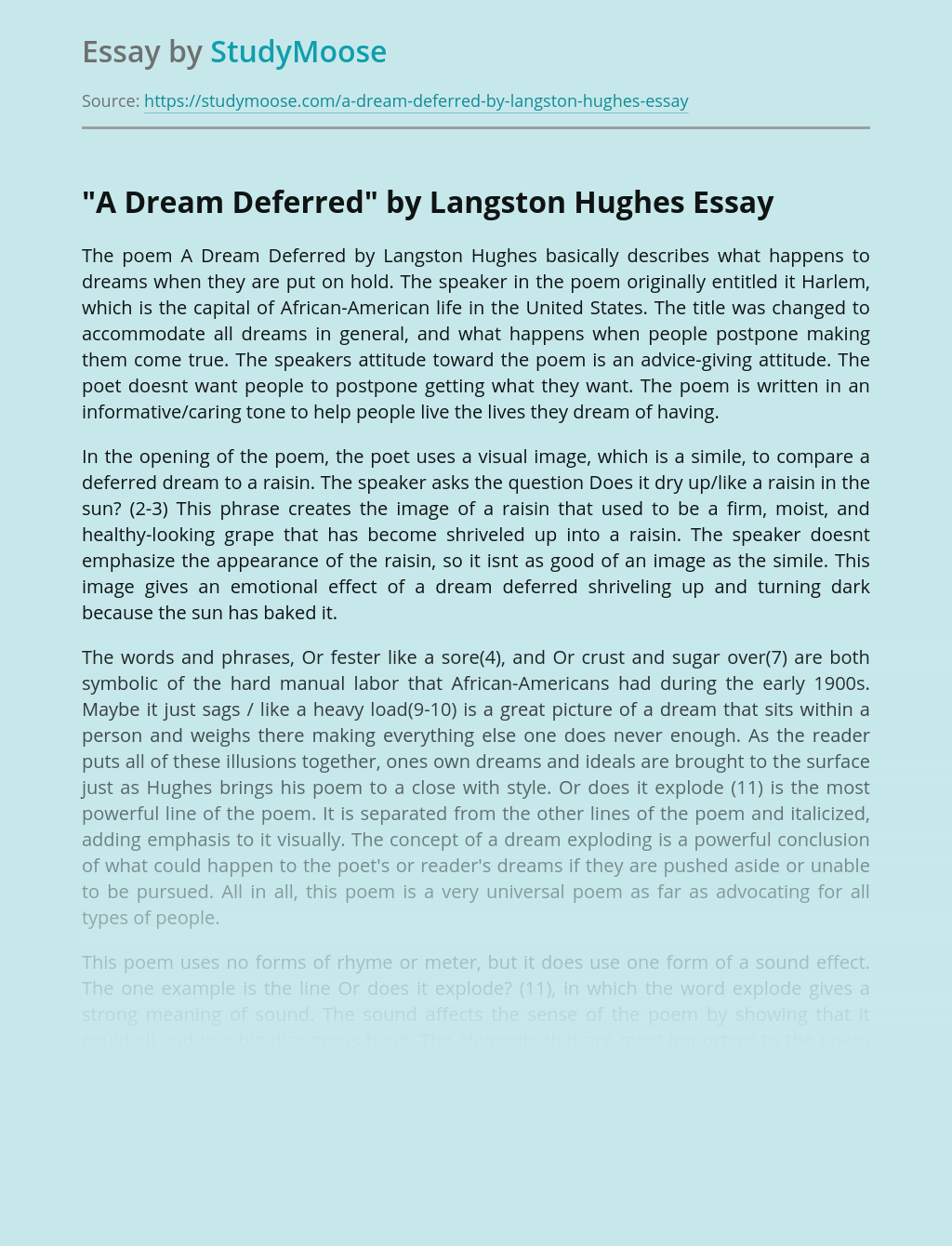