When he says “to whirl and to dance till the white day is done” he is speaking of being able to be free, dancing and “flinging your arms” is demonstrative of freedom and an open expression of freedom.

Turn in your highest-quality paper
Get a qualified writer to help you with
“ Langston Hughes Poems Analysis ”
Get high-quality paper
NEW! AI matching with writer

The dawn’s a-comin” demonstrates that freedom from oppression is on the horizon and that African Americans should rejoice. The setting of this poem in religion also demonstrates a sense of hope since religion is often sought after to achieve a sense of hope. In Song of the Revolution, this poem uses the symbology of the American Revolution as another call for freedom from oppression, however this is freedom from the oppression of White America. “Marching like fire over the world, weaving from the earth its bright red banner” uses fire as a symbol for hope and courage and the use of a red banner as conviction and steadfastness.

In the third stanza, which states “Breaking the bond of the darker races, breaking the chains that have held for years, breaking the barriers dividing the people, smashing the gods of terror and tears” This stanza serves as a call to arms for African Americans. This stanza is less symbolic and cryptic than the others. “smashing the gods of terror and tears” is the freedom from rulers and the establishment which has wronged and oppressed them. He wants a unity of the races and a freedom and lack of oppression.

In Let America Be America Again, hughes is using America’s calling as a beacon of hope to the world to demonstrates his ideal for America to truly be free and not simply as a saying. This is evident in the first stanza, which states “Let America be America again, Let it be the dream in used to be, let it be the pioneer on the plain, seeking a home where he himself is free. ” The parenthesis between the stanzas is what is important, because it displays Hughes’s real opinion of America at that time, which was he doesn’t believe in America, and to him was never a beacon of hope or a land of liberty.

He believes that America is tyrannical, oppressive, and discriminatory to him and his people. In the last stanza he also uses divisions of class and other races that are oppressed as reinforcement for his opinions of America. In the third stanza which states, “O, let my land be a land where Liberty is crowned with no false patriotic wreath, but opportunity is real, and life is free, Equality is in the air we breath. ” It’s demonstrating Hughes’s desire for America to really be as it’s envisioned and not simply as it is portrayed (in the eyes of Hughes); equality should be as prevalent and available as air. 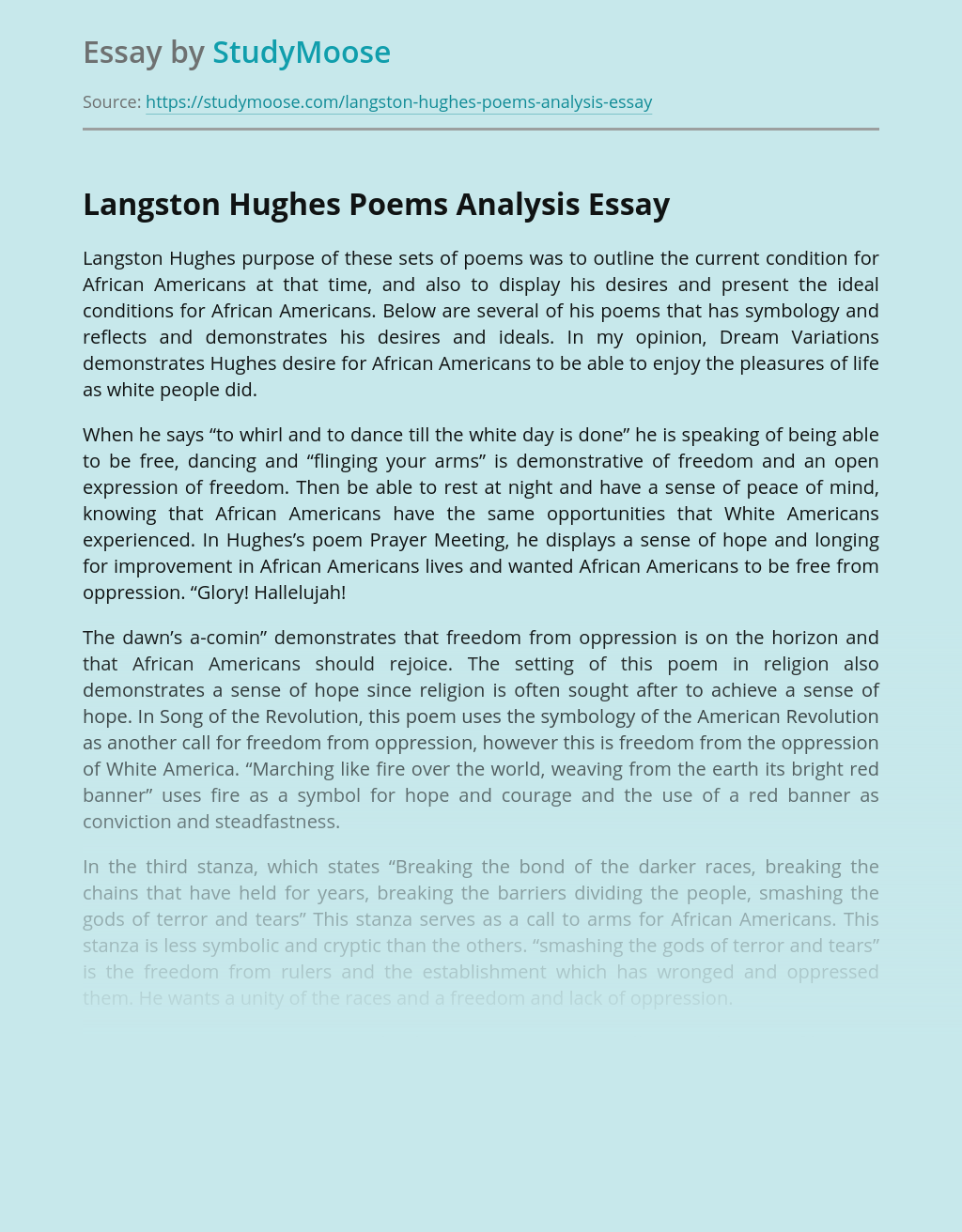 Turn in your highest-quality paper
Get a qualified writer to help you with
“ Langston Hughes Poems Analysis ”
Get high-quality paper
Helping students since 2015
Stay Safe, Stay Original