The Life and Works of Langston Hughes

During the Harlem Renaissance, writers such as Zora Neal Hurston and Langston Hughes gained fame and respect for their ability to express the Black American experiences in their works. Langston Hughes was one of the most original and versatile of the twentieth-century black writers. Influenced by Laurence Dunbar, Carl Dandburg, and his grandmother, Carrie Mercer Langston Hughes, Langston Hughes began writing creatively while still a boy.

Born in Joplin Missouri, Langston Hughes lived with both his parents until they separated and at the age of seven, he had to go and live with his maternal grandmother.

Don't use plagiarized sources. Get your custom essay on
“ The Life and Works of Langston Hughes ”
Get custom paper
NEW! smart matching with writer

Although she told him wonderful stories about Frederick Douglas and Sojourner Truth and took him to hear Booker T. Washington, Langston did not get all the attention he needed. Furthermore, Hughes felt hurt by both his parents and was unable to understand why he was not allowed to live with either of them. These feelings of rejection caused him to grow up very insecure and unsure of himself.

Because his childhood was a lonely time, he fought the loneliness by reading.

“Books began to happen to me, and I began to believe in nothing but books and the wonderful world in books where if people suffered, they suffered in beautiful language, not in monosyllables, as we did in Kansas” (Hughes 16).

Langston Hughes began writing in high school, and even at this early age was developing the voice that made him famous. Hughes writing talent was recognized by highschool teacher and classmates, and Hughes had his first pieces of verse published in the Central High Monthly, a sophisticated school magazine.

An English teacher introduced him to poets such as Carl Sandburg and Walk Whitman, and these became Hughes’s earliest influences. Many other things aided him in his writing development. “Before he was twelve years old, he had lived in six different American cities. When his first book was published, he had already been a truck farmer, cook, waiter, college graduate, sailor, and a doorman at a nightclub in Paris, and had visited Mexico, West Africa, the Azores, the Canary Islands, Holland, France and Italy.” (DLB)

He was very fascinated and influenced by Harlem’s people and the life itself, there. The Big Sea, the first volume of his autobiography, provided “such a crucial first person account of the era” that much of what we know about the Harlem Renaissance we know from Hughes’s point of view. One of his first poems that was affected by Harlem’s life, where he lived attending Columbia University, was called The Weary Blues, which Hughes said was about “a piano player [he] heard in Harlem.” He did not send it to the publisher because he was not satisfied with the ending. He did not get any money for his work until later on.

To earn money for living, Hughes had to find other jobs. In the spring of 1923, he took a job on a freighter, as a cabin boy. This voyage was to West Africa and back but Hughes departed this ship in France because he thought that “maybe there might be a jinx on our ship, so I got off.” After living in different European countries, and getting little money, he “wrote an article about [his] trip to Africa and sent it to the Crisis and asked them please to pay [him) twenty dollars for it, because [he] was stranded and starving in Italy, but would try to live until the money got there. It was the first time [he has] asked the Crisis to pay [him] anything, or expected it.” He didn’t want for the “wire” because, by luck, he found a way to get to New York by working without pay on a ship in exchange for the journey. He got the $20 dollars when he got back to United States.

In New York, he wrote poetry, entered it into contest and was invited to the banquet where he got acquainted with Van Vechten and submitted some poems to him. These poems were published and appeared in February 1926 as The Weary Blues. Since then, he has been receiving many different prized for his poetry and essays. Since then, Hughes went to many parties and banquets and met many well know and wealthy painters as Miguel Covarrubias, Aaron Douglas, Winold Reiss, and Arthur Spingarn, a lawyer. His wealthy sister-in-law, Amy Spingarn, got acquainted with Langston Hughes and since then has become a secret benefactor. She also financed his education to Lincoln University which was an all-male, black college in Pennsylvania. Durring his stay there, Hughes wrote

a lot. Fine Clothes to the Jew was published in February 1927 and had mixed reactions from critics. Many critics objected to the book. To show his dissatisfaction, J. A. Rogers wrote:

“The fittest compliment I can pay this latest work by Langston Hughes is to say that it is, on the whole, about as fine a collection of piffling trash as is to be found under the covers of any book. If The Weary Blues made readers of a loftier turn of mind weary, this will make them positively sick.” (Mullen 47)

Although Fine Clothes to the Jew was not well received at the time of its publication because it was too experimental many other critics believed the volume to be among Hughes’s finest work. DuBose Heyward, who wrote for New York Herald Tribune Books, stated that:

Money was always a problem throughout his life and he was never financially secure. In 1947, however through his work writing lyrics for the Broadway musical Street Scene, Hughes was finally able to earn enough money to purchase a house in Harlem. Langston Hughes continued to write poetry throughout his life. By the 1960s he was known as the “Dean of Negro Writers.” In Hughes biography, Jazz Evans insisted that:

“With his rich poetic voice nurturing generosity warm humor, and abiding love of black people, Langston Hughes was one of the dominant voices in American literature of this century and perhaps the single most influential black poet.”

Hughes wrote Broadway musicals short stories, long stories, a novel, five additional volumes of prose, an autobiography, and the highly acclaimed collection, Montage of a Dream Deferred, written in 1951. Langston Hughes was truly one of the most important poets of American Literature.

It wasn’t easy growing up in a society where white domination was hardly of any support to the then growing black geniuses of literature like Langston Hughes. Though many obstacles came in his life, he was able to over come them without ever giving up. As a poet, he was truly an amazing writer finding ways to express the forbidden feelings of African Americans in his little poems and other literary works. Although his works were written in a simple language, they delivered a much greater meaning that was not seen on the surface of its innocence.

“Hold fast to dreams for if dreams die, life is a broken bird that cannot fly.” Just like in his poem, Hughes never let go of his dreams and has got the reputation for being one of the greatest black writers of the Harlem Renaissance Period. Hughes is very alive today, because his work lives on and is appreciated throughout the world every year, every day, every second.

The Life and Works of Langston Hughes. (2021, Sep 23). Retrieved from https://studymoose.com/the-life-and-works-of-langston-hughes-essay 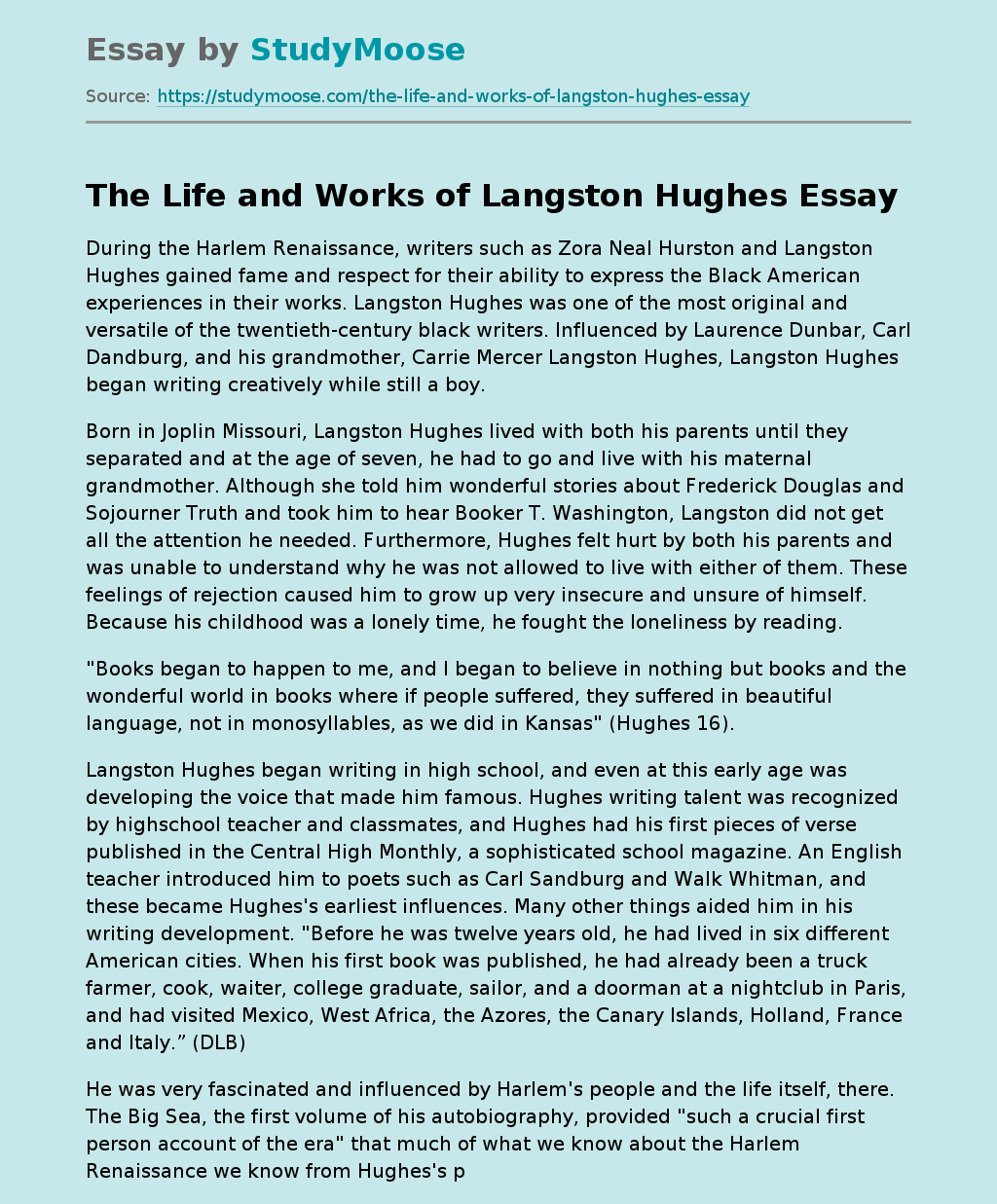