With reference to chapters 11-16, trace the development and change in character that the monster undergoes. The structure of Frankenstein begins as an epistolary, narrative story by Robert Walton to his sister (Mrs Saville) in England. Walton’s letters tell us that he is exploring, searching for what lies beyond the North Pole and that he longs for fame and glory. Walton and Frankenstein connect in this novel as they both seek and have a thirst for knowledge. For Walton it is his exploration, for Frankenstein it is to discover the secret of life.

Don't use plagiarized sources. Get your custom essay on
“ Victor’s story ”
Get custom paper
NEW! smart matching with writer

Walton’s letters announce the discovery and rescue of a stranger – Victor Frankenstein. This is another connection between these two characters because when Victor is found he tells Robert Walton his story (this is after the monster has told his story to Frankenstein) and of course Walton passes on his version to his sister. This shows an elaborate series of frames because Victor’s story is embedded within Walton’s.

However the innermost embedded narrative in this novel is the story the monster tells to Frankenstein as this is in the central part. Shelley has been very clever writing this novel because within it there are several stories and several points of view within the telling of these stories. Walton, Victor and the monster each tell their own stories.

From the start of the monster’s narrative (Chapter 11) he is, from birth constantly developing at a rapid pace. He is similar to a human being in a way that he cannot remember his first moments of life.

However his differences are alarming because he can vaguely remember his discovery of sensations and his awareness of senses. Also, the short time it takes for the monster to distinguish between these senses is quite remarkable. The first sensation in the monster’s memory is when light hits his eyes when he awakes, but how it becomes dark when he shuts his eyes.

From birth he works from natural instincts and so he is more animal than human, this is until he discovers emotion. First emotions the monster endures are fear, (‘I felt half-frightened) pain (‘pain invade on all sides, I sat down and wept’) and pleasure (‘A gentle light stole over the heavens and gave me a sensation of pleasure’)

A few days after the monster’s birth he discovers exactly how his senses work and after this he expresses his feelings (he does this by groaning) for the need to learn a language. He longs to communicate with people and to be rid of loneliness. He fails to express his feelings because his own voice scares him. The monster’s rapid development continues when he becomes able to think and learn, by now he relies less on instinct and is now more human than animal. An example of the monster learning is when he becomes aware of time by using the moon’s cycle after he has spent fourteen days in the forest. Indications of his thinking ability is how he reasons through logic. (The fire provided comfort and heat but when he touched it he ‘let out a cry of pain’) This quote proves how experience has helped the monster avoid pain again and how he is able to sit and think about how to overcome other problems he faced such as how to light a fire.

Shortly after this stage in the monster’s life he has first contact with man (an old shepherd) He is shocked by the shepherd’s disgusted reaction and cannot understand why he fled and why he didn’t seem to be welcome in the hut. The monster becomes enchanted by the appearance of the hut (owned by the fleeing shepherd) and is amazed by how this building can ‘penetrate snow and rain’ and how it kept anyone inside sheltered and dry. He describes this hut as ‘Pandaemonium appeared to the daemons of hell after their sufferings in the lake of fire’. This hints that the monster can read and has read ‘Paradise Lost’ which we later find out in Chapter 15. (This quote is a reference to ‘Paradise Lost’ by John Milton) Inside the hut the monster tastes various foods such as bread, cheese, milk and wine, he disliked wine showing us that he is still developing all the time. (like a child with acquired taste)

After leaving the hut the monster has his second encounter with man, he arrives at a village(the village represents human community). He sees this as his chance to gain companionship and so approaches some houses until he hears their reaction. The monster became the cause of ‘shrieking children’ and a woman fainting. The surrounding men attacked him in fear, due to his extreme size and ugliness. The monster seems to be completely innocent when he ‘fearfully took refuge in a low hovel’ after being viciously assaulted by ‘stones and other kinds of missile weapons’ (At this time the monster had never seen himself and so knew nothing of beauty). He then, did not understand why humans acted as barbarians towards him.

So soon after this monster was created by Victor Frankenstein he felt fearful of the society of man and tedious to why they attacked him in the first place. This makes the reader feel sympathetic towards the monster because to us he does not seem to be a monster at all! At this point in the story, the reader is surprised how their previous view of Frankenstein and the monster in this story are so different. We then wonder who the real villain in the story is. 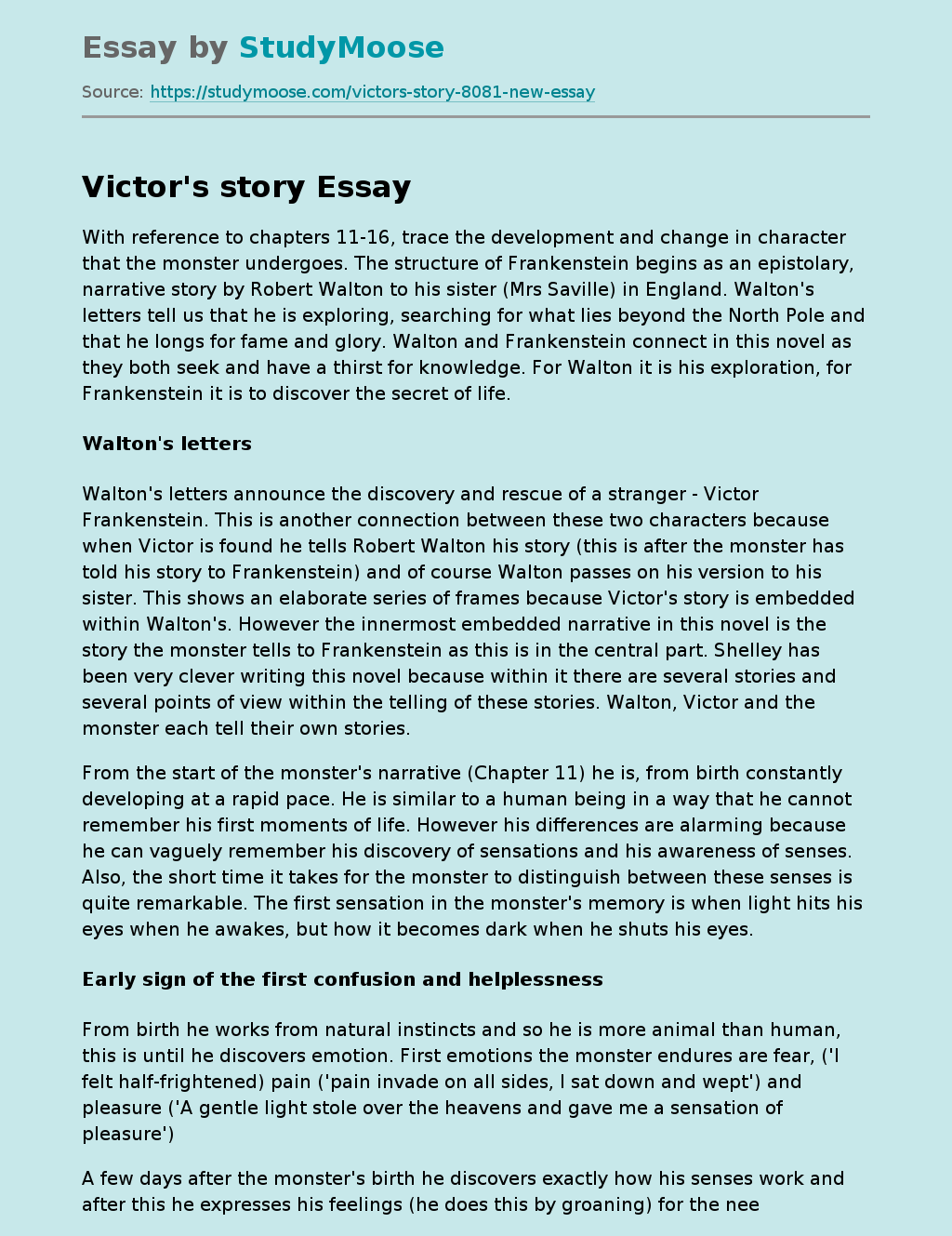