Frankenstein's Monster: Why did the Creature kill William?

He had tried to seek the compassion his creator had not given him in other human beings, and had been treated with equal hatred. His suffering was intense and thus his feelings of passionate bitterness and desire to seek revenge through violence grew. The creature had been treated with violence by Felix, and had read of violence in novels he acquired, and so knew of it more than just instinctively. These feelings of violence were not suddenly borne from one bad act, because he didn’t kill Felix when he had the chance, but instead spared him, and only now after much thought and consideration he felt passionate enough to commit these acts.

Don't use plagiarized sources. Get your custom essay on
“ Frankenstein’s Monster: Why did the Creature kill William? ”
Get custom paper
NEW! smart matching with writer

When the creature stumbles upon a young girl who is about to drown, he overcomes feelings of hatred for the race of humans and tries to save her, and succeeds. This action strongly suggests that the creature is not a cold blooded murderer at all, and in fact a naturally good soul.

Despite all the wrongs human kind had done against him, he still felt the need to save their kind because from them he saw the opportunity to derive so much emotional pleasure. However, his kindness is not rewarded with pleasure, but with a bullet shot from the girl’s father, who had presumed the worse of the physically deformed monster.

This left the creature the lowest it had ever felt. ‘This was then the reward for me benevolence! I had saved a human being from destruction and, as a recompense, I now writhed under the miserable pain of a wound, which shattered flesh and bone.

The feelings of kindness and gentleness which I had entertained but a few moments before gave place to hellish rage and gnashing teeth. Inflamed by pain, I vowed eternal hatred and vengeance to all mankind. ‘ The creature from this situation proceeded to Geneva in order to seek his creator. He came upon, on his travels, a young and very handsome boy.

He hopes that the boy is unprejudiced and plans to steal him and educate him as a companion and a friend. However, the boy is prejudiced against the deformed creature, and is also found to be a relation of Dr Frankenstein. ‘Frankenstein! You belong then to my enemy- to him towards whom I have sworn eternal revenge; you shall be my first victim. ‘ Hence, the creature strangles William, futher enraged and despaired by William’s insults. ‘ ” I too can create desolation, my enemy is not invulnerable; this death will carry despair to him, and a thousand other miseries shall torment and destroy him.

‘” The creature. The above quote shows the creature’s motives behind killing William. He wanted to subject his creator to similar emotions that he had been subjected to, for example, despair, pain and desperation. The creature realises that he has power over his creator, power to give him misery, just as his creator has given him misery. The only idea the creature has on how to rouse these emotions from within Frankenstein is by killing his loved ones. This is the primary reason why he kills William .

The creature did not kill because of rooted evil qualities in which he was born into, but instead he killed as a reaction to the severe rejection he endured and as a result of being on the receiving end of cumulative acts of prejudiced hatred. In fact, there is more evidence to suggest, as discussed throughout the essay, that the creature tried repeatedly to make friends with the humans despite being repeatedly rejected. For example, even after he is shunned by the society of the cottage, he tries to help the little girl.

In conclusion, the creature was not born a monster, but from the nature of humanity, a monster was born. The monster killed William because society had made him a monster, and the only way he felt he could gain revenge was from making Dr Frankenstein feel as lonely as him, hence, by killing his close family.

Frankenstein's Monster: Why did the Creature kill William?. (2017, Oct 30). Retrieved from http://studymoose.com/frankensteins-monster-why-did-the-creature-kill-william-essay 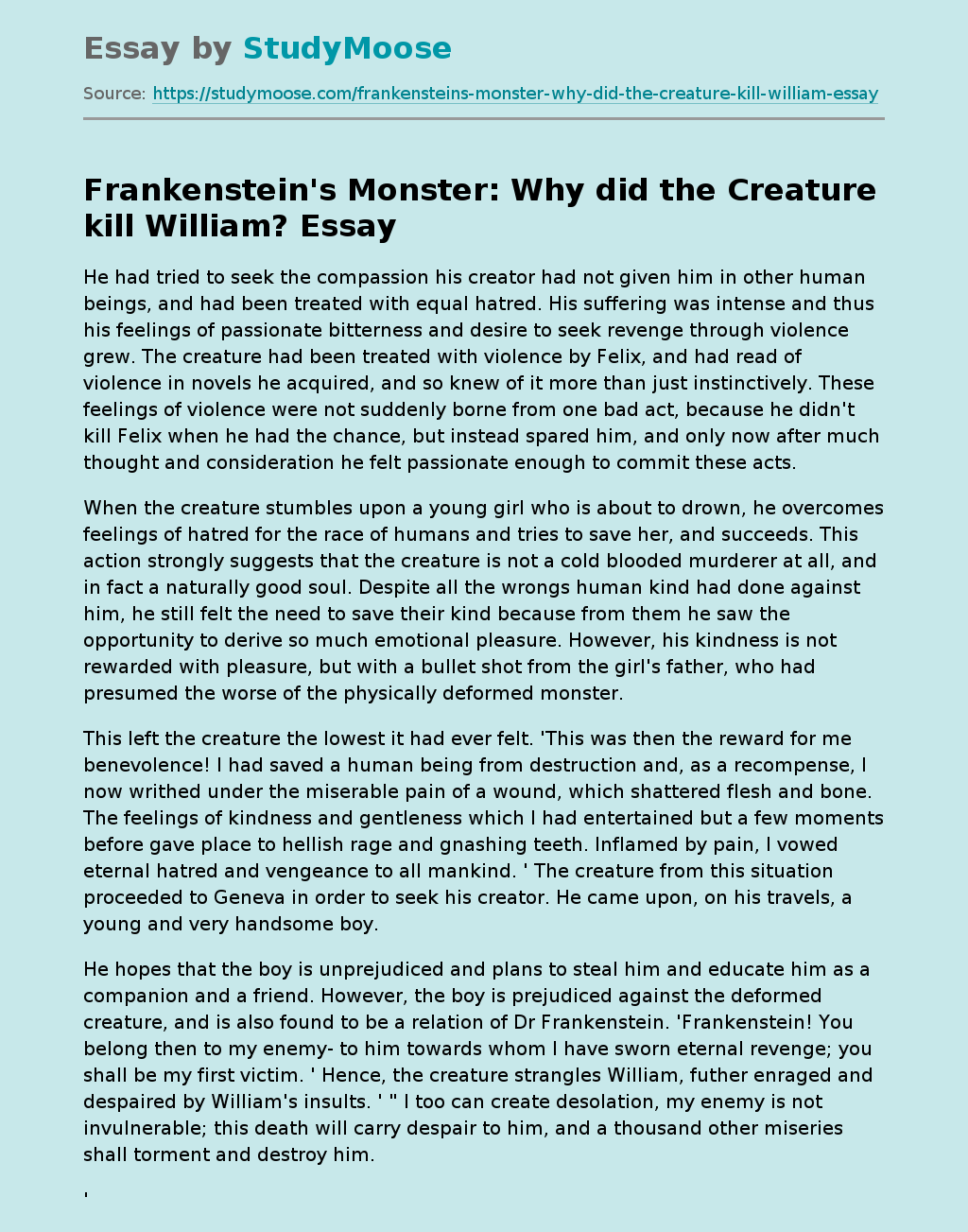