I Am an Emotional Creature

Eve Ensler, the author of I Am an Emotional Creature: The Secret Lives Of Girls Around The World, created this particular book with various sets of monologues to not only inspire and empower women but encourage them to be themselves and be themselves proudly. Eve gives her audience monologues that demonstrate females in situations you wouldn’t believe a human would possibly have the strength to go through. Eve Ensler is the voice of lovers, teenagers, mothers and victims in the monologues of I Am an Emotional Creature.

Don't use plagiarized sources. Get your custom essay on
“ I Am an Emotional Creature ”
Get custom paper
NEW! smart matching with writer

These fictional soliloquies are made to show the frequent and strenuous struggles females face, and sometimes don’t overcome. Stories starting from young females wanting a nose job just to fit in compaired to an even younger female living her life as a victim of human sex trafficking while also growing up being the victim of her dads bestfriend whom is also her rapist. I Am an Emotional Creature begins with Foreword written by Carol Gilligan.

“Having broken a rather astonishing silence by encouraging women to say “vagina” in public. Eve Ensler has now written a new set of monologues, intended this time for girls.” (Ensler xiii) She begins the introduction with “Dear Emotional Creature, You know who you are. I wrote this book because I believe in you.” (Ensler xiii) Eve Ensler has a purpose to give rise to women, and help women inspire one another. She is the voice these women never had and she is the reason they will one day love themselves again.

Eve Ensler wants to share with men and women the difficulties women deal with on a daily basis and hopefully one day make the world a safer place for all.

A recurrent theme between each monologue in I Am an Emotional Creature is to not only accept yourself for who you are but embrace it! It is okay to not follow the norms of your peers. Females of all ages struggle with day to day life challenges, some more severe than others, but they are made extra strong to overcome these struggles.

On page sixteen of I Am an Emotional Creature Eve Ensler gives her readers an excerpt called What Don’t You Like About Being A Girl? She compares the life of girls and boys, and certainly states that boys have the advantages in life. Society has set high expectations for women that they’re now at a point where they feel they have no choice but to follow these expectations. Girls don’t have an option when it comes to life, while boys can do anything they want. Women deal with people always staring at their boobs but it’s not anything they can change, because they’re born with them and they only get larger as they get older. Girls have a period every single month and have to not only deal with the blood, but the pain of cramps and the uncomfortability also. A girl is expected to get married and have children, and live the rest of her life caring not only for herself but her family too. This means cooking, cleaning, laundry all while also making a living. Even with an education, women are expected not to work. When given the opportunity to work, the promotion is likely to be given to the male, even though the female worked harder for it. Being a female and reading this excerpt it’s almost as if you’re convinced it sucks being a female, until you get to page one hundred and fourteen of I Am an Emotional Creature and read What Do You Like About Being A Girl? You are reminded of all the amazing things women have the ability to do. There are so many astonishing things women do, that others simply can’t. Women grow and carry a human fetus in their womb for nine months, women make the population of the world grow, because of mothers everybody has a chance to fall in love and then one day have their own wedding, children and story to tell. “Girls are close to their fathers, Girls don’t force boys to do stuff, Girls wear pretty clothes, Girls can create a new life.” (Ensler 114) “I love being a girl, I can feel what you’re feeling, as you’re feeling it inside.” says Eve Ensler when writing the monologue I Am an Emotional Creature. She explains to her audience all the amazing things and feelings when having the female body. I am an emotional, devotional, incandotional creature. And I love, hear me, love love love being a girl.” (Ensler 137) There are so many positive things girls have the ability to do, the positives override the negatives by a landslide. There are a great quantity of reasons to love having a vagina, it’s an honor.

Girls live their lives in fear everyday because of the privilege and force men carry. Everyday females are assaulted, abused and raped, the numbers are unbelievably high. Men think they have an open invitation to sexually abuse a woman because of the way she is dressed. In My Short Skirt, an excerpt on page one hundred and twenty three of I Am an Emotional Creature, Eve Ensler speaks about how men think they have an open invitation to touch her because she is wearing a short skirt. “My short skirt is not an invitation, a provocation, an indication that I want it or give it or hook.” (Ensler 123) She speaks in rage because she has to live her life in fear because of the actions these men are getting away with. Women do not dress provocatively for men, they dress for themselves! The way a woman dresses is how she expresses her personality and herself. Unfortunately, not all men think this way. Women are expected to dress a certain way to prevent thoughts like these coming from men but how is that fair? How is a girl expected to be herself if she can’t dress in her own style? That is the exact message Eve Ensler is portraying to her audience, she wants women to have the same freedom a man has. How would a man feel if a woman assaulted him due to him showing a little bit of skin? It’s not fair. In Dear Rhiana, a rather upsetting and disappointing letter, a famous singer is in a heartbreaking situation due to being a victim of domestic violence. The monologue is written from a fan of the victim. The purpose of the letter is to persuade the victim to forgive her abuser who is also her boyfriend, all because he apologized for hitting her. The writer unkindly says to Rhiana “I used to really respect you,” (Ensler 71) “How could you dump him after one bad thing? It’s so shallow to drop someone after they mess up. You have everything, Rhiana.” (Ensler 71) Instead of building Rihana up and making her feel better about the whole situation, she is discouraging her. Chris Brown, the abuser who is also a famous singer, made a video apologizing to Rhiana for hitting her. Fans react to the video and feel bad for Chris because he seemed so nervous and sad while making the video. People are sticking up for the abuser and bashing on the victim because she chose to not only do what was best but safer for her. In several cases of domestic violence victims do not have the strength to leave. “They’re all crazy sad you know. I can tell even when Brad slaps me sometimes. It doesn’t hurt as much as seeing how alone he is and confused and sad.” (Ensler 73) Is abuse the new love language for these young women? No female should feel the power of a man’s hand across her face. Always do what is best for yourself and your mental health, whether others support you or not. I believe Eve Ensler is trying to encourage females of all ages to do what is best for themselves, regardless of what others think. It is important to live a life with a healthy mindset. I am the daughter of a past victim of domestic violence and the best thing my mother did was walk away. Not only was it the best thing for herself but also her health, her family and others around her.

In the monologues Eve Ensler presents in her book, she gives her audience important themes that relate to being a girl. Eve Ensler presents the argument that females face several obstacles while having to follow society’s high expectations and objections in their daily lives. It’s troublesome for a female to be herself when she continuously feels she needs to dress accordingly to avoid being raped by a man giving himself personal invitations into her body. Eve Ensler speaks in purpose to empower justice for women and remind the world just how astounding women are.

I Am an Emotional Creature. (2021, Aug 18). Retrieved from http://studymoose.com/i-am-an-emotional-creature-essay 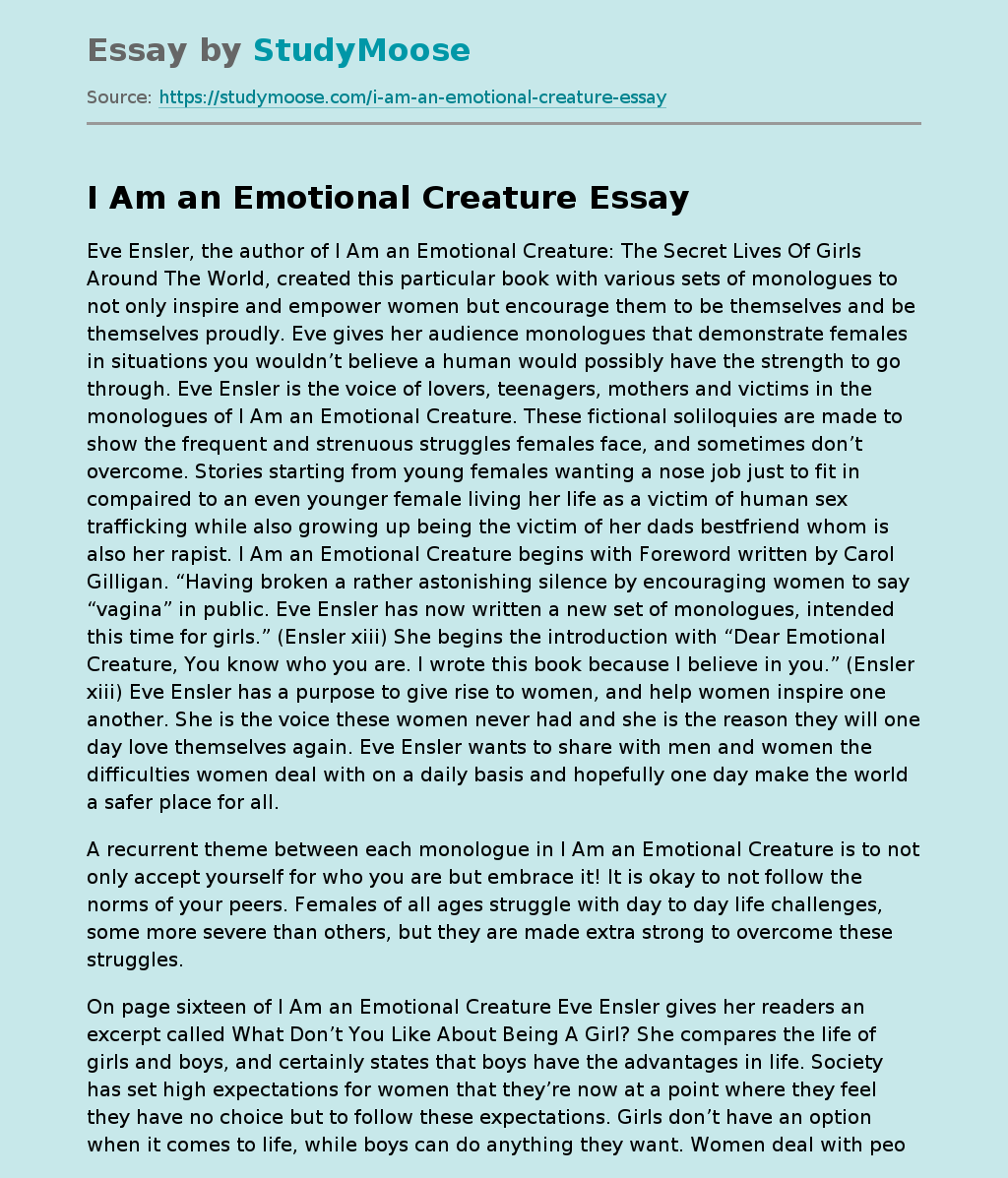