Everyone is uniquely shaped, and should not be compared with others. Expressing ourselves can differentiate from other expressions since we are unique in each and every way. Some similarities may exist, but not necessarily every aspect of what we tend to express. As defined in the textbook, “emotional expression is the most important representation of our emotions, and may be similar to others” (Adler, Proctor, and Towne 137). Perception is part of the emotional expression because “it is the process of selecting, acquiring, interpreting, and organizing sensory information” (wikipedia.

Don't use plagiarized sources. Get your custom essay on
“ Cultural Influences On Emotional Expression and Perception ”
Get custom paper
NEW! smart matching with writer

These two are important because we express what we express with the perception of our emotional expression. Different situations will result in different perception of emotional expression. For example, we may jump when we feel excitement or cry when we feel grief. Every expression we make is appropriate on what we feel in that particular event. We live in a country with a very diverse culture, and everyone is raise differently base on their culture.

This paper will talk about the cultural influences on emotional expression and perception. Examples, description, and explanation will also be given to further explain the topic.

Although many emotions and expressions of emotions are universal, some differences exist among many cultures. The comparison of both cultural similarity and difference has been very important in the area of emotional expression and perception (Matsumoto par. 2). It is very helpful to know the similarities and differences in emotion across cultures. It helps us understand the role of emotion in our lives and the importance of emotion to our thinking and behaving.

People in different cultures categorize emotions differently. Some languages have classification for emotions that are not classified in other languages.

It is a belief that nonverbal expressions of emotion differ across cultures, due to the fact that different cultures have different display rules. Display rules are norms that tell people whether, which, how, and when emotions should be displayed (wikipedia.org). The power of cultural norm determines how and when to show emotions that is not actually felt. The comparison of emotions helps us understand the role of emotional expression and nonverbal behaviors in social interactions to improve interaction among people from different cultural backgrounds.

In addition, when comparing expressions, people of different cultures agree on which is more strongly expressed? Cross-cultural research indicates that the answer to this question is yes. Itziar and Fernandez compared these differences in paired expression of the same emotion (par. 5). According to the research, the result was that “ninety-two percent of the time, the ten cultures in their study agreed on which of two expressions was more intense” (Fernandez, Carrera, Sanchez, Paez, and Candia par. 5). For example, looking separately for each emotion, American and Japanese agreed on which photo were more intense in 24 out of 30 comparison. These findings are important because they suggest that people of different cultures use the same visual cues in judging others (Fernandez, Carrera, Sanchez, Paez, and Candia par. 8).

The role of culture in emotional control is shown most explicitly through the use of display rules. Display rules are learned, culturally determined norms that govern people’s display of emotions in different social situations (Matsumoto, 1990). Matsumoto (1972) found cultural differences in display rules when a group of Japanese and American students were shown stressful film stimuli in two conditions. In the alone condition, both the Japanese and American students displayed the same negative facial expressions of fear, disgust, and distress.

However, when the experimenter was present, the Japanese students smiled to mask their negative emotions while the Americans continued to exhibit their negative affects. Furthermore, a study by Matsumoto (1990) found that Americans rated disgust and sadness as more appropriate in in-groups than did the Japanese. In contrast, the Japanese rated anger as more appropriate in out-groups than did the Americans. The above findings suggest that the Japanese and American students utilized different sets of display rules which influenced either their expression or inhibition of their emotions (Matsumoto par. 2).

The different sets of display rules can be understood in terms of the American and Japanese emphasis on individualism versus collectivism respectively. Individualism and collectivism are dimensions of cultural variability that refer to the degree to which a culture encourages individual needs, wishes, desires, and values over that of the group (Matsumoto, 1990). For example, individualistic cultures emphasize individual goals and independence. Collectivist cultures, on the other hand, stress collective goals and dependence on the group (Matsumoto, 1989).

It could be understood in this context that the expression of negative emotions in an in-group setting is regarded as extremely negative in collectivist countries, since the manifestations of such emotions threatens the interdependent relationship of the group. In an individualist country, however, the expression of both positive and negative emotions may feel right and good since such expressions highlight both the separation of self from others and the individual’s private, internal attributes (Forgas and Bond, 1994). What may feel good then, in this case the inhibition or expression of emotions, is largely dependent on one’s culture and socialization. To take this idea a step further, the correlation between emotional inhibition and well-being, either negative or positive, may be dependent on one’s respective culture.

A past research on the relationship between emotional control and well-being has yielded conflicting findings. Where one line of research suggests that the active inhibition of emotions will lead to an increase in physiological arousal and a decrease in well-being, the other proposes that the inhibition of emotions will result in a higher level of well-being. The aim of the present study is to unravel parts of the conflict by examining the influence of gender and culture on the relationship between emotional control and well-being in two ethnic groups, Asians and Caucasians (Aeker and Williams par. 10).

Furthermore, seventy-nine participants were asked to fill out questionnaires assessingtheir level of emotional inhibition, subjective well-being, and identification with anindividualistic versus collectivist culture. Results found that Caucasians and Asians differed onthe individualism-collectivism scale, with Caucasians being more individualistic and Asiansmore collectivists. The effect of culture was found with Caucasians having a negative correlationbetween emotional inhibition and well-being while Asians having an almost zero correlation.

Furthermore, the Asian sample in the present study consists of students from U.C. Berkeley. It can be speculated that these students have to some extent acculturated into the American system and perhaps have embraced parts of the individualist culture, such as the value of expressiveness. Though the ICIAI depicts significant cultural difference between the Asians and Caucasian sample, the issue of acculturation can be reduced with cross-cultural research comparing the U.S. population with the Asian population.

To investigate further the meaning of differences, Matsumoto (1993) showed ratings from Japanese and Americans on smiling versus non-smiling faces with regard to intelligence,attractiveness, and sociability. Americans rated smiling faces as more intelligent than neutral faces; the Japanese, however, did not. Americans and Japanese both found smiling faces more sociable than neutral faces, but for the Americans the difference was greater. These differences suggest that cultural display rules cause of Japanese and Americans to attribute different meanings to the smile, and serve as a good explanation for perceived major differences in communication styles across cultures.

Summing up, this paper talked about the different expressions the people in different cultures gave. Everyone is brought up differently and taught differently. Therefore, we express our emotion differently because of the surroundings we grew up in, and the people that influenced us. Although people in certain parts of the world are different in terms of the background, tradition, and norm and so on, all of us are crossing that barrier on having friends by effective communication. We shouldn’t prejudice other persons before thoroughly knowing them because stereotyping is typically wrong. If people start to get to thoroughly understand differences of others, then this will become the beginning of making best friendships than ever.

Aeker, Jennifer L. and Patti Williams. “Empathy Versus Pride: The Influence of Emotional Appeals Across Cultures.” The Journal of Consumer Research 25.3 (1998): 241-61. 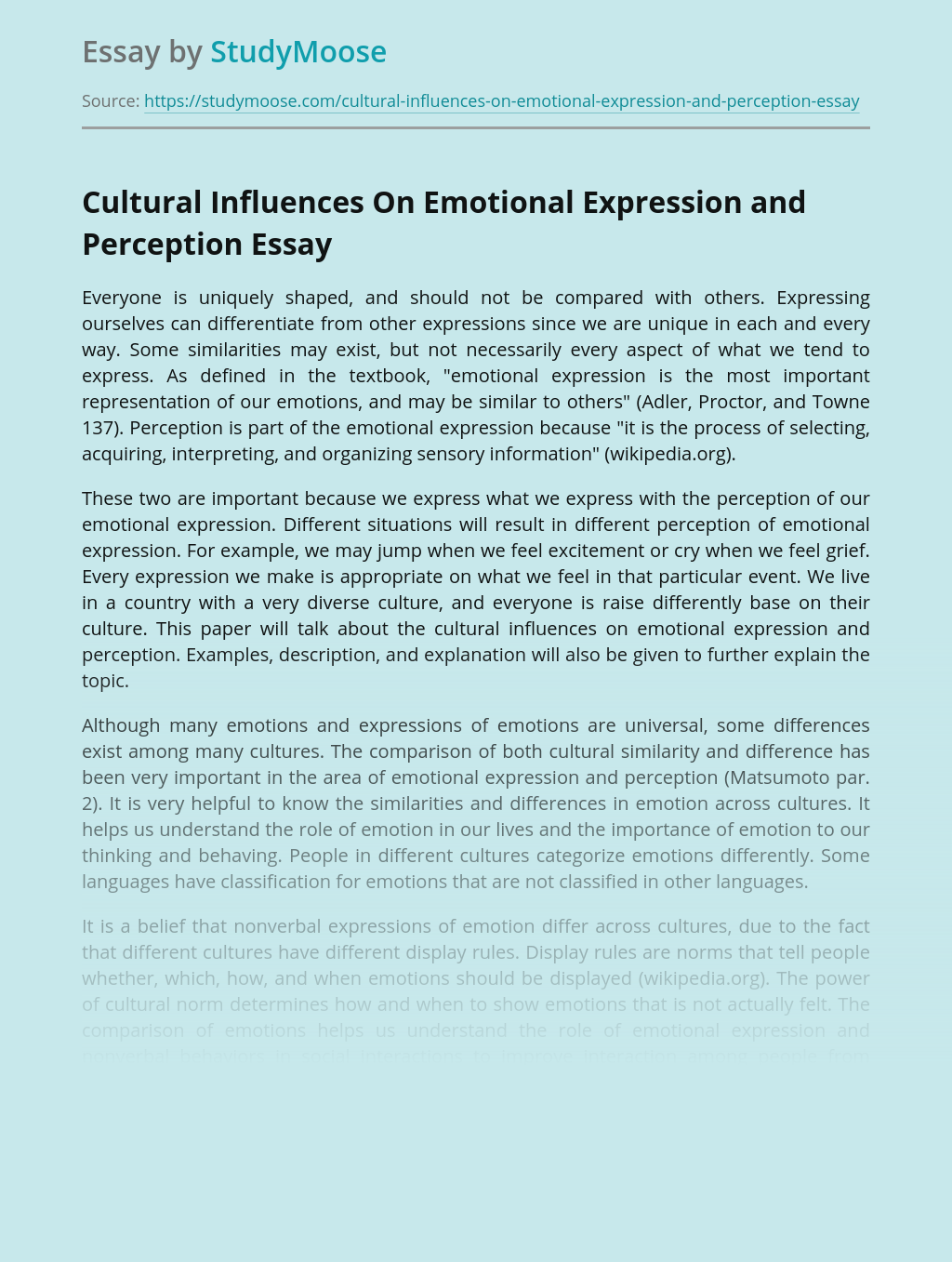