The Witch Justified: True Creature or A Social Puzzle?

The author, throughout the whole short story, never validates the real existence of the “witch.” The story never says that Minggay is really a confirmed witch. The author makes the antagonist character complex, making it hard for the audience or readers to decide if Minggay is just a story spread through oral tradition, or a real mythical character. Nonetheless, we can say that her character is an icon of social issues, that have been encountered ever since our ancestors’ indigenous cultures, based on the rumors or chismis spread in the barrio about this peculiar woman, who is suspected as a witch.

Turn in your highest-quality paper
Get a qualified writer to help you with
“ The Witch Justified: True Creature or A Social Puzzle? ”
Get high-quality paper
NEW! AI matching with writer

In the story, the protagonist is unnamed. We can tell that the boy is obedient and sweet, respectively from the lines “Once I was told to go to Libas with a bottle of medicine for Tio Sabelo’s wife” (7) and “One morning, I thought of bringing home shrimps to my mother, and so I went to a creek a hundred yards from Tio Sabelo’s house” (10).

Being young and less wise, he, as most other 12 year-old boys, will believe gossips and stories revolving around him, such as the rumors on Minggay Awok, even without binding evidence. Maybe, he is unnamed mainly because he lacks individuality and a more concrete identity.

The suspected antagonist, Minggay Awok, was considered as the old hag who “lived in a small, low hut as the back of the creek separating the barrios of Libas and Sinit-an” (1). She was the center of many stories around the barrio, as she was blamed for most, if not all, of the incidents happening in their place.

The boy at first, not knowing that she was the witch, thought Villegas 2 she seemed like a very kind old woman, who has been through many years. “Her eyes looked surprisingly young, but her mouth, just a thin line above the little chin, seemed to have tasted many bitter years” (13).

“The protruding eyes of the biggest, which was still alive, seemed to glare at me— and then they become the eyes of the witch” (41). This line shows us that the unnamed boy, who really didn’t have a fixed identity, getting confused if it was the witch’s power working on him or just the stories influencing his mind. After all, he assumed that Minggay was a kind woman, had he not known where she lived.

The story shows us a very important social matter. As what is happening almost everywhere in the Philippines, the situation in the short story “The Witch” shows us how strong the words of other people can affect us. The spreading rumors that Minggay is a witch, even if there is no reasonable and valid proof, has people believing, most especially children, that the stories are true, without bothering to know if it is legit. It is very socially unjust to judge a person who lives far from society, far from the people, as different, weird, or worse, a witch.

The short story “The Witch” is based on oral tradition. Oral tradition, dating back to ancient times, has made a mark even in today’s society. The normal chismis is the best example. The short story offers us with a mystery. It makes us think if it is our fear of those who are different that create witches in our society. It makes us wonder if the Minggay’s in our society are deserving to be accused as witches. Or, if we ourselves, the chismosos and chismosas, are the real witches in the society. Society will always have a way to let us know. Maybe we’ll know when it’s our turn to bring home shrimps for our mothers.

The Witch Justified: True Creature or A Social Puzzle?. (2016, Aug 19). Retrieved from https://studymoose.com/the-witch-justified-true-creature-or-a-social-puzzle-essay 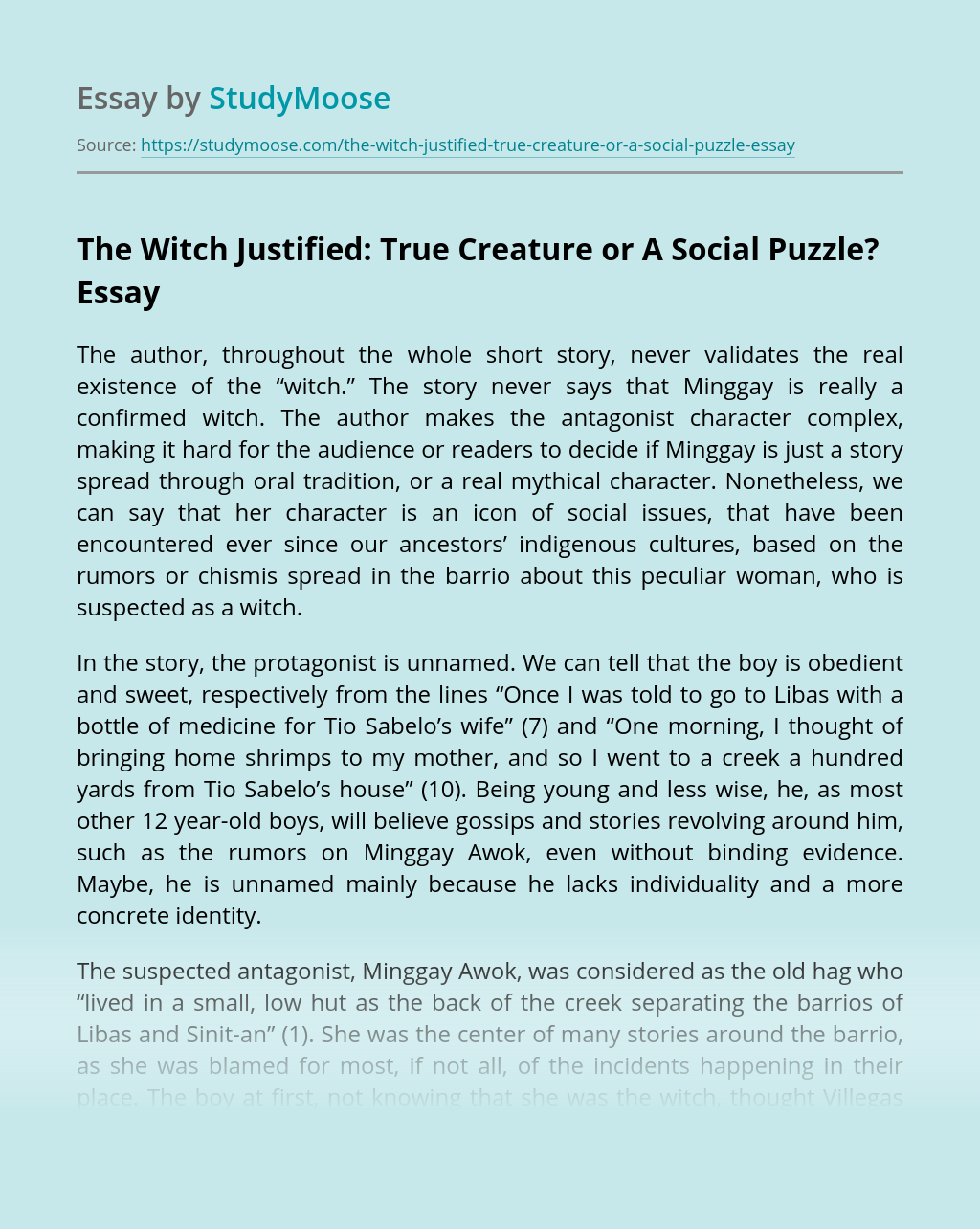 Turn in your highest-quality paper
Get a qualified writer to help you with
“ The Witch Justified: True Creature or A Social Puzzle? ”
Get high-quality paper
Helping students since 2015
Stay Safe, Stay Original