Knowledge is a Justified True Belief

There are cases where something is true, but someone believes in the truth of invalid reason. The definition of these cases and all problems involving an element of truth, but existence of belief for invalid reasons is called the Gettier problem (stanford.edu). The problems expose inconsistencies in the model for evaluating the justifications of knowledge to create belief as outlined by Plato. However, knowledge is a justified true belief.

The concept of knowledge as a justified true belief can be traced to the Plato.

Don't use plagiarized sources. Get your custom essay on
“ Knowledge is a Justified True Belief ”
Get custom paper
NEW! smart matching with writer

Plato proposed that for someone to believe in something, there has to be some sort of justification. Therefore, the definition of Knowledge is a justified true belief (stanford.edu). The implication of the definition is that for one to accept a proposition as true, there has to be some level of acceptable justification for the proposition. For example, for one to believe that a proposition, P, is true, P must be true, the subject must believe that P is true and have a justification for the belief.

Therefore, the knowledge is a function of a justification and a belief.

However, according to the Getteir problems, it is possible to for P to be true even where the justifications are not valid. For example, Gettier used examples of a person who believed that something was true without true justification (stanford.edu). For example, the question of Jane, believing that Mary own a Ford may be true. It meets two conditions of knowledge as a true belief because the belief is true and Jane believes that it is true.

However, Jane has an invalid reason for her belief. For example, the justification is relevant because of a coincidence.

The illustration shows that the aspect of justification is not a necessary part of the definition because it is possible for the argument to be flawed. For example, the luck involved in the justification does not change the status of the truth because the fact that Mary own the car remains a valid truth that can be justified by any other means (stanford.edu).

The implication of the Gettier problem is that the conditions proposed by Plato are necessary conditions but not necessarily sufficient. For example, for something to be true, the conditions are necessary in the definition of a problem. In addition, all logical people have a rationale for having a belief, even where the rationale is not valid (stanford.edu). For example, in matters of faith, most people believe in Supernatural beings without any sort of proof.

Knowledge is a Justified True Belief. (2019, Aug 19). Retrieved from https://studymoose.com/knowledge-is-a-justified-true-belief-essay 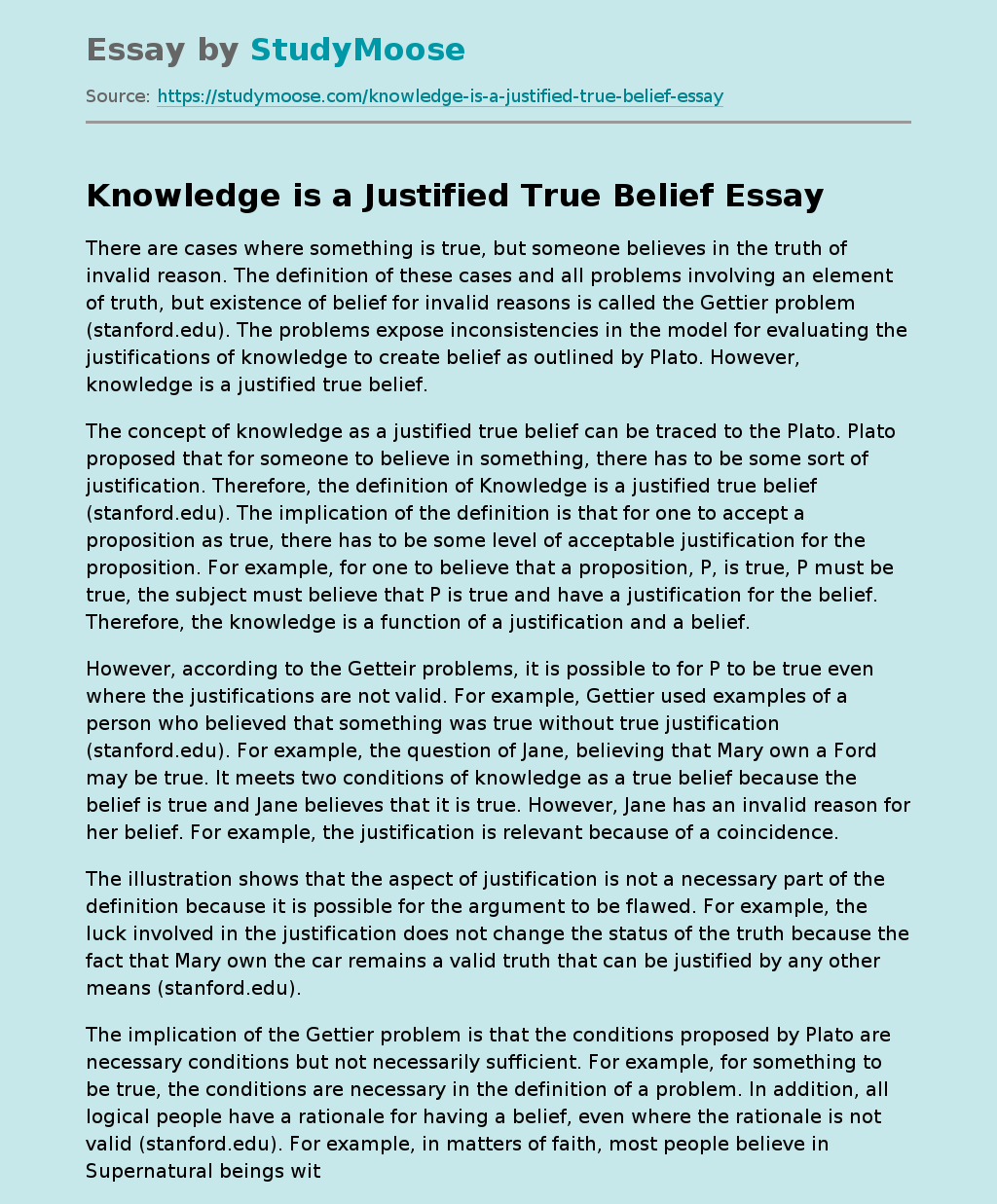