Shared knowledge, in common sense, refers to a body of knowledge that is commonly accepted or rejected by a collective organization (IB TOK guide). Personal knowledge, on the other hand, refers to a body knowledge acquired from experiences of a particular individual (IB TOK guide). Since human beings are political animals, as Aristotle aptly points out, as humans, we are born into a certain form of community or society. Being born into a society requires socialization process and this long extended period of socialization process exposes us to varying bodies of knowledge.

Don't use plagiarized sources. Get your custom essay on
“ Shared Knowledge and Knowledge Management ”
Get custom paper
NEW! smart matching with writer

First, socialization can shape personal understanding of the world. As human beings, from infancy onward, we have to learn from others. When we need parental care, we learn greatly from parents. As we grow, sources of learning may expand to include relatives and other adults who can teach something. This socialization process often takes place in non-institutional settings.

Since a very young age, we have learned to accept certain theories and knowledge presented to us by a very large group of people, including teachers.

The established sets of knowledge can then be used to act as a standard by which personal knowledge can be judged. In art, the institutional learning process teaches people a point of reference by which the validity of individuals’ interpretations, understanding, and analysis of an artwork can be judged. In natural science, institutional learning process also causes people to conform to a standard by which individual observations or theories can be measured.

In the fields of art, shared knowledge among established artists and specialists, whose views dominate the standard perspective of certain objects, can shape what some individual artists have of their creative activities, such as paintings and literature. The shared knowledge among established experts serves as a standard by which any new creations, new experiments, or even new theories shall be evaluated.

For instance, millions of people still crowd aroundLouvre to see Leonardo da Vinci’s “Mona Lisa”. But what is so special about the painting that makes it so influential? To some extent, the painting seems to be no more than a portrait of a typical woman during the Renaissance period. However, without sophisticated understanding of the painting itself, it is very hard to provide a valid argument that the painting does not serve any value.

On the other hand, with specific reference to Leonardo da Vinci’s exquisite use of ‘ light and shadow in the paining’ and ‘ illusion of three-dimensional features through layer of transparent glazes’, many experts’ opinions came to a consensus and have since served as a standard viewpoint for many viewers. In this way, many viewers are more likely to believe in the powerful yet mysterious artwork of Leonardo da Vinci.

Similarly, my experience with George Orwell’s eminent novel, 1984, explains how shared knowledge acts as the standard view, which can affect individual’s understanding of this fiction in particular and art in general. When I first encountered George Orwell’s 1984,I struggled to read it because I did not understand the ideology and purpose of cruelty and strict rules in a society. In fact, I thought that the book was a portrayal of a mere imagination of one’s own world. However, after learning about the historical context of the literature from online and history books, I came to appreciate how the author cleverly set up the novel to portray a totalitarian regime existing after the World War II and that the purpose of the novel was to critique potential dangers of living under such regime. In this way, my initial personal knowledge was shaped by the established and shared knowledge by relevant experts in literature.

In natural science, shared knowledge also acts as a reference point or the standard by which any scientist’s research outcome will be measured.  For example, Rene Prosper Blondlot, a French physicist, once claimed to have discovered a new type of radiation called N-ray. Through a series of unconventional experiments, which requires using prisms to refract N-ray, he asserted that all substances except for green wood emit N-rays. However, when another physicist, Robert W. Wood, failed to replicate the experiment, scientific community rejected Blondlot’s discovery of N-ray and concluded that the discovery was a mere “self-induced visual hallucination”.

Because scientists believe that science should be infallible and that every experiment should conform to the conventional methods, Blondlot’s seemingly significant discovery was taken to be unacceptable. Had scientists anticipated misguided notion in the existing body of knowledge, they may have considered Blondlot’s experiment favorably, thus taking a significant step towards advancement in the fields of science. In this light, this explicates the way in which shared knowledge is so influential that it acts as a point of reference by which personal knowledge is accepted or otherwise.

Once, Louis Pasteur was certain that it was airborne bacteria that cause contamination of food. Unfortunately, the scientific community, which had strongly believed in Aristotle’s spontaneous generation, immediately rejected Pasteur’s theory. However, strongly believing that spontaneous generation is invalid, Pasteur devised a more conclusive experiment by bringing in the two different test tubes filled with nutritious broth- one was straight necked and the other had curved neck.

He observed consistent results in this experiment and, based on such evidence and the use of deductive reasoning, he proved that the cause of the contamination of the nutritious broth was airborne bacteria. The volume of data and accuracy of the results produced by Pasteur made Pasteur’s theory more valid than the prevailing theory of spontaneous generation. In the end, having found that Pasteur’s theory is more convincing in explaining the existing body of knowledge on the nature of bacteria, the scientific community decided to accept his theory to replace Aristotle’s long held theory of spontaneous generation.

Language in some parts of art, such as music, is very difficult to communicate in one universal manner, since music involves subjective feelings and interpretations, a new interpretation and a new way of expressing some feelings are extensively practiced in music. The history of music tells much about the nature or direction of relationship between shared knowledge and personal knowledge. The sense of this history is that there is no fixed or one-directional relationship between the two. Rather, the supposed relationship between the shared knowledge among experts and personal knowledge is bi-directional, mutually influencing and shaping each other.

My personal experience vindicates this mutual bidirectional nature of knowledge. I had been studying the Expressionist music, in preparation for a music examination. Because communication of emotions was very hard, I could not fully comprehend Beethoven’s 4th symphony only by reading textbooks about Expressionist music. Especially, I could not comprehend how musical techniques, such as forte, function to give out a specific feeling of ‘grandiloquence’.

However, after listening to the music, a sensation quickly filled my heart and I could instantly understand Beethoven’s intention for writing this specific piece of music. The emotion was ineffable, but the established facts and specific musical effects described in textbooks started to make sense, after hearing the music. In music, when emotion and imagination are to be in demand, the personal knowledge interacts with the shared knowledge to make more sense of an understanding of the music. 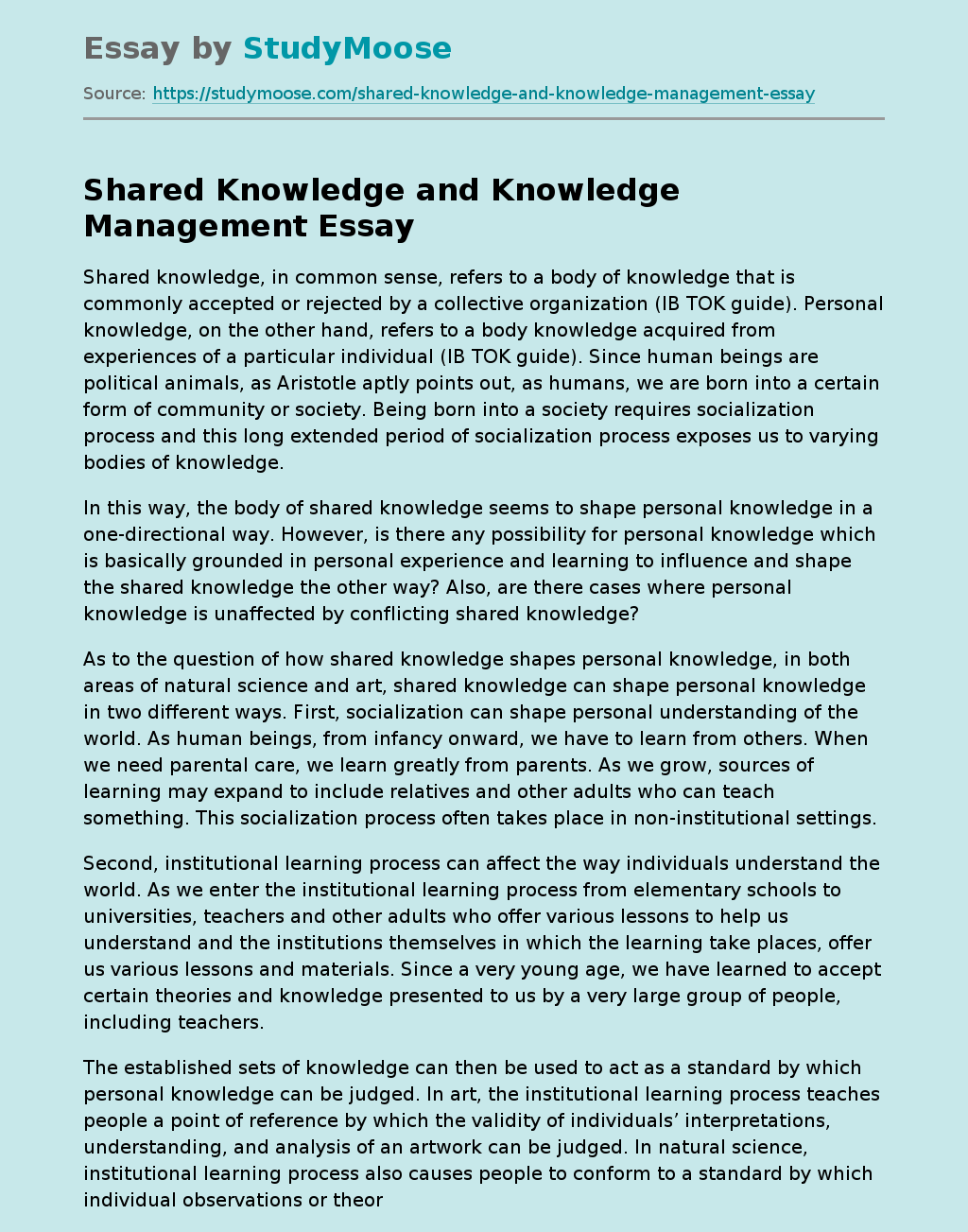