Kurt Vonnegut’s Slaughterhouse-Five and Joseph Heller’s Catch-22 use similar motifs to convey their common anti-war message. Although it is truly difficult for any author to communicate the true nature of war in a work of literature, both novels are triumphant in their attempts to convey the devastating experience. The authors’ analogous writing styles, themes, and motifs run parallel to one another. Both Slaughterhouse-Five and Catch-22 incorporate irony, exemplify the idiocy and folly of military institutions, and convey a similar theme throughout their story lines.

One common theme is seen in the characters of Hungry Joe in Catch-22 and Edgar Derby in Slaughterhouse-Five. Both of these characters relate to the casualties that were not caused by direct battle wounds. These motifs relay the authors’ anti-war message. “The picture of war painted by Heller and Vonnegut is highlighted by their utilization of irony. Their careful strokes of irony on the canvas of their novels help to prove one of their numerous shared themes.

Along with Hungry Joe and Edgar Derby exemplifying the casualties not caused by battle, they also represent the tragedies suffered shortly before the conclusion of the war. After surviving all of the hardships of war, these two men perish only when the end of the war could be seen in the horizon. The irony in the both men’s deaths is very clear. Hungry Joe’s death, after over 70 combat missions as a pilot, came quietly “in his sleep while having a dream.” (Heller 445) As Slaughterhouse-Five’s counterpart to Hungry Joe, “the arbitrary death of Edgar Derby” is similarly ironic.

(Snodgrass 435) After surviving some devastating ordeals during the war, along with prison camp, “he was arrested for plundering” after stealing a teapot. “He was tried and shot” only months before the end of the war.” (Vonnegut 214) Both men experienced death, but ironically not as a result of combat only after surviving so many horrific events of war.

Many comparisons can be made between the institutions and organizations of war in both novels. Both the English men in the Nazi POW camps in Slaughterhouse-Five and the men of M & M Enterprises in Catch-22 have similar ironic experiences with the group that exists in their own societies. In Catch-22, Snowden is in the process of dying and Yossarian frantically attempts to help him. He opens the first-aid kit to realize “The twelve syrettes of morphine had been stolen from their case and replaced by a clearly lettered note that said: What’s good for M & M Enterprises is good for the country. Milo Minderbinder.” (Heller 446) This event is ironic because M & M’s repossession of morphine is directly causing Snowden to suffer a greater deal than he should.

Although Billy Pilgrim seemed to have an experience completely opposite of Snowden’s, it was actually extraordinarily similar. Billy arrives at a very comfortable prison camp in which other Englishmen reside. When he first arrived “he remembered that his shoes were ruined, that he needed boots.” (Vonnegut 95) He is able to obtain a pair of silver boots from the play production of Cinderella which the prison men put on. Billy and his fellow POW’s were also very well off since “A clerical error early in the war, when food was still getting through to prisoners, had caused the Red Cross to ship them five hundred parcels every month instead of fifty.” (Vonnegut 94) Thanks to the military institution’s blunder, the men in the camp “Are among the wealthiest people in Europe, in terms of food.” (Vonnegut 94) Billy gains from the mistakes in which the military made, just as Snowden was a direct victim of them. Unlike the Englishmen benefiting from a mishap, Snowden suffered from a conscious decision that “is food for the country.” (Heller 446)

Sex is an ever-present motif incorporated in both novels. Both Yossarian and Billy are overly preoccupied with the act of sex and the female body. It’s portrayed by the authors as the only relief from the violence and emotional impacts of war, instead of an escape from reality which is usually portrayed. To further demonstrate this theory, we can analyze Billy’s actions in the arena of his created world, the zoo on Tralfamadore. The target of his fantasy is “Montana Wildhack, a motion picture star” (Vonnegut 132), which is common for humans of all time-eras past to present. The planet of Tralfamadore is a representation of Billy’s ideal world, and surely enough a woman, renown for her fame in the movie world and her beauty, was one of his first additions. From this action, Vonnegut attempts to communicate the message of sex being a paramount concern in the lives of all soldiers.

Similar to Billy Pilgrim, Yossarian has an obsession with sex, women, and their bodies. When analyzed, he can be considered that of a sexual maniac. His sexual desires were often seen throughout cadet school as he slept with his commanding officer’s wife, Mrs. Sheisskopf. While serving in the military, he was introduced to many divine women. Later in the novel he exclaimed that at one point “he was madly in love with all of them.” (Heller 166) Yossarian had mistaken his feelings of lust for feelings of love as a result of traumatic experiences during the war.

An alternative subconscious motive for sex can also be seen in Yossarian and Bill. Throughout the war, both men have witnessed an abundance of violence and death around them. Based on their experiences, we can assume that they desire sex for the purpose of reproduction. While Yossarian was engaged in an affair with Mrs. Scheisskopf, every month she would tell him, “Darling, we’re having a baby again.” (Heller 80) Just as Vonnegut believed and communicated in Slaughterhouse-Five, A soldier’s instinct and desire is to reproduce and even before he has taken lives, he wishes to pay in advance for the lives he knows he may be responsible for taking. (Meredith 102)

In the novels Slaughterhouse-Five and Catch-22, each author uses the events in their stories to depict the tragedies of war. Each individual event describes a particular hardship experienced by each of the soldiers throughout their wartime experiences. Although the exact events within the novels were different, many similarities were noticeable; the casualties of the environment of war, the discouraging deaths of those men just as the war was commencing, the irony of the actions of the military institutions and the harm they cause, and the desire of sex in the soldiers. The common motifs and themes in the novels explore the terrible aspects of war and reflect on a true anti-war message intended by the authors. The message professes that “no matter what happens, we should retain our humanity.” (Vit 1) 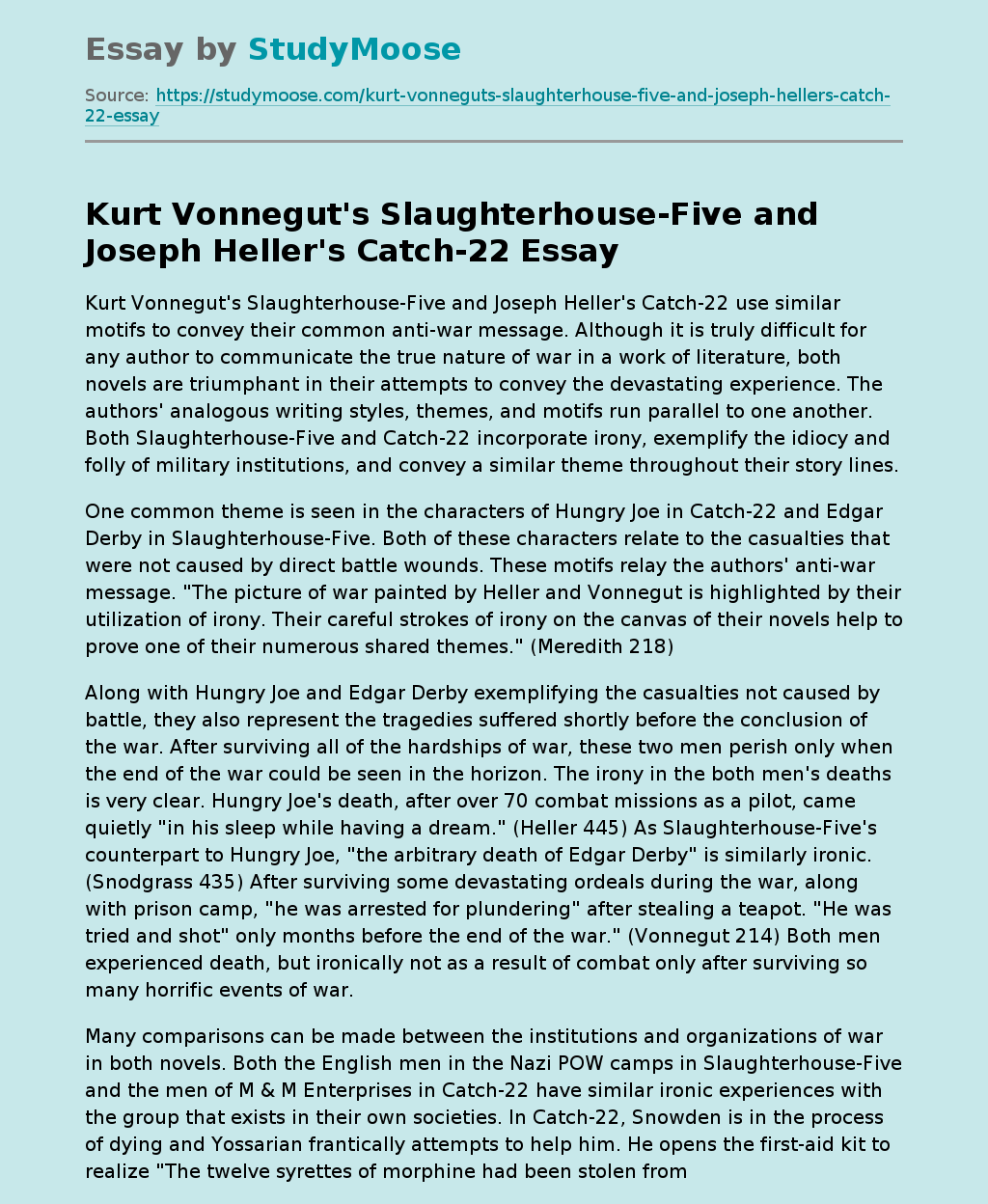