Literary Elements in a Book Slaughterhouse-Five

English author George Meredith wrote, “The true test of comedy is that it shall awaken thoughtful laughter.” Slaughterhouse-Five would have been quite the comedy in Meredith’s eyes, because it is an extremely satirical work.

Don't use plagiarized sources. Get your custom essay on
“ Literary Elements in a Book Slaughterhouse-Five ”
Get custom paper
NEW! smart matching with writer

Satire is writing that ridicules human weakness in order to bring about social reform. Ridicule, in this case, is humorous mockery of something, making people thoughtfully laugh about the situations which these characters find themselves in. In the Kurt Vonnegut novel Slaughterhouse-Five, the main character Billy wants only to have a normal American life, but his studies to become an optometrist are interrupted by his being drafted into the army during World War II and, as a prisoner of war, experiences the tragic bombing of Dresden.

Then, he begins regular travels to the planet Tralfamadore. He also begins to become “unstuck in time;” he is time traveling. This essay discusses the use of satire in Slaughterhouse-Five to communicate to the reader the themes which are addressed in the book.

In chapter four of Slaughterhouse-Five, satire is used through the comic depiction of a war film depicting the process of dropping bombs, all the way from mining the materials needed to make the bombs, to dropping them, to the planes landing back where they came from (74-75).

This film, though, is described as it played backwards, as if somebody is rewinding a VHS cassette. Comic relief is the inclusion of something humorous often to heighten the emotional impact by means of contrast. The war film, when played backwards, conveys a very serious topic, but is lightened by the diverting and comical description of the reverse playing of the film.

Farce is a comedy characterized by improbable plot situations, exaggerated characters, and broad satire. In Slaughterhouse-Five, one of the many instances of farce is the character Howard W. Campbell, Jr. (128-131). Campbell is an ex-prisoner of war who has turned his support to the Germans and is trying to form a unit of Americans who shift their allegiance to the Germans to fight against the Russian Communists. In his ridiculous and highly symbolic outfit, he tries to appeal to the American prisoners of war his ideas that the Germans are fighting for many of the same purposes as the Americans: against the Communists. Because of the outrageous and funny nature of Campbell, one is forced to think about the rash idealism which he stands for.

Farce in this situation is used to denounce the metanarratives that are taught in war. It first emphasizes the craziness of the German ideal, and then the dogmatic wills of the Americans who do anything to reiterate their hatred for Communists. Then, when Edgar Derby, the leader of the American prisoners of war, stands up to speak against Campbell, the section is used to denounce the post-World War I anti-German metanarrative.

Black comedy is the combining of morbid and serious topics with elements of low comedy to underscore the senseless futility of life. It is used as a form of comic relief in Slaughterhouse-Five while Billy is on a plane on the way to the convention of optometrists (155-156). His father-in-law asks the barbershop quartet to sing his favorite song. The song is quite comical and uses lots of low humor, such as cursing and parodying Polish accents. This reminds the author of a very serious time when Billy saw a Polish man being hanged in the street during World War II for having sexual intercourse with a German woman. The reader is pulled in by the funny song which is then related to the very serious topic of racial discrimination and hate. This connects to the theme of the terribleness of racial hatred.

Irony is something that is opposite of what is meant, what is supposed to happen, or what makes sense. In Slaughterhouse-Five, irony occurs in the Kilgore Trout story about Jesus (109). He is a nobody, and for fun, the Romans crucify him. Then, they realize that he is the son of God and that he was an unfortunate person to kill. This causes the reader to rethink everything they have thought about the the gospel of Jesus Christ and free will, and also to laugh about their ignorance of this new idea of what really happened in the beginning of the New Testament.

The theme addressed by this short story is that nobody is completely sure of what is going on, and somebody else such as God must be in charge, thus, there is no free will. Many themes are addressed in Kurt Vonnegut’s novel, Slaughterhouse-Five, like the denunciation of the metanarratives popularized during war, the disagreement with the legitimacy of the destruction of war, the horribleness of racial hatred, and the lack of free will. These topics are discussed in Slaughterhouse-Five through the use of humorous elements such as black comedy and farce. One may choose to think about these very important themes, and maybe they will affect one’s life.

Literary Elements in a Book Slaughterhouse-Five. (2016, Apr 12). Retrieved from http://studymoose.com/literary-elements-in-a-book-slaughterhouse-five-essay 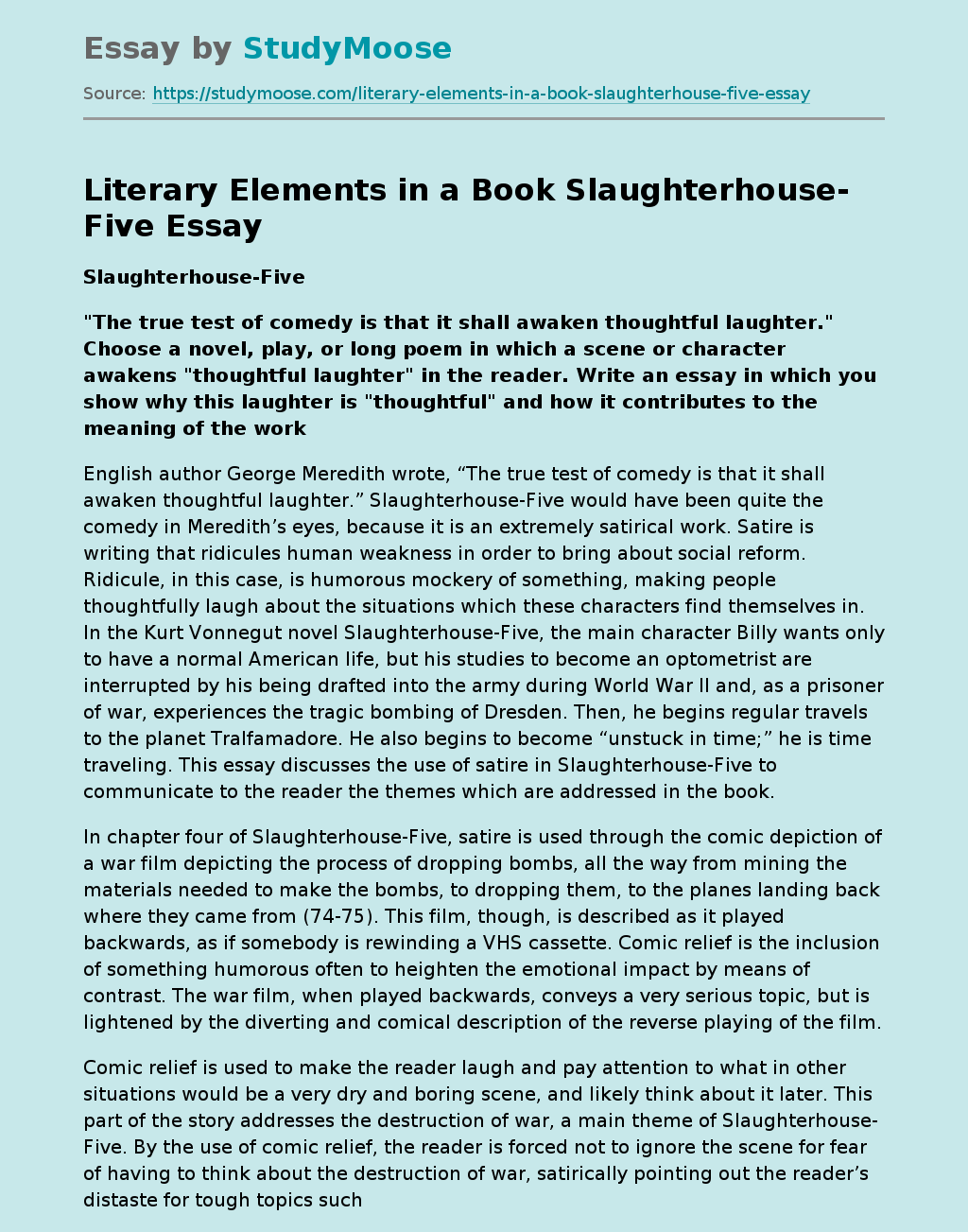