Slaughterhouse-Five explores fate, free will, and the illogical nature of human beings. Protagonist Billy Pilgrim is unstuck in time, randomly experiencing the events of his life, with no idea of what part he will next visit. Billy Pilgrim says there is no free will, an assertion confirmed by a Tralfamadorian, who says, “I’ve visited thirty-one inhabited planets in the universe. Only on Earth is there any talk of free will.” The story’s central concept is that most of humanity is insignificant–they do what they do, because they must.

Don't use plagiarized sources. Get your custom essay on
“ Slaughterhouse Five ”
Get custom paper
NEW! smart matching with writer

To the Tralfamadorians, everything simultaneously exists, therefore, everyone is always alive. They, too, have wars and suffer tragedies (they destroy the universe whilst testing spaceship fuels), but, when Billy asks what they do about wars, they reply that they simply ignore them. The Tralfamadorians counter Vonnegut’s true theme: life, as a human being, is only enjoyable with unknowns.

Tralfamadorians do not make choices about what they do, but have power only over what they think (the subject of Timequake).

Vonnegut expounds his position in chapter one, “that writing an anti-war book is like writing an anti-glacier book,” both being futile endeavours, since both phenomena are unstoppable. Like much of Vonnegut’s other works (e.g., The Sirens of Titan), Slaughterhouse-Five explores the concept of fatalism. The Tralfamadorians represent the belief in war as inevitable. In their hapless destruction of the universe, Vonnegut’s characters do not sympathize with their philosophy. To human beings, Vonnegut says, ignoring a war is unacceptable when we have free will; however, he does not explicitly state that we actually have free will, leaving open the possibility that he is satirizing the concept of free will as a product of human irrationality.

This human senselessness appears in the climax that occurs, not with the Dresden fire bombing, but with the summary execution of a man who committed a petty theft. Amid all that horror, death, and destruction, time is taken to punish one man. Yet, the time is taken, and Vonnegut takes the outside opinion of the bird asking, “Poo-tee-weet?” The same birdsong ends the novel God Bless You, Mr. Rosewater. Slaughterhouse-Five is framed with chapters in the author’s voice, about his experience of war, indicating the novel is intimately connected with his life and convictions. That established, Vonnegut withdraws from the unfolding of Billy Pilgrim’s story, despite continual appearances as a minor character: in the POW camp latrine, exiting the train at Dresden, the corpse mines of Dresden, when he mistakenly dials Billy’s telephone number. These authorial appearances anchor Billy Pilgrim’s life to reality, highlighting his existential struggle to fit in the human world. 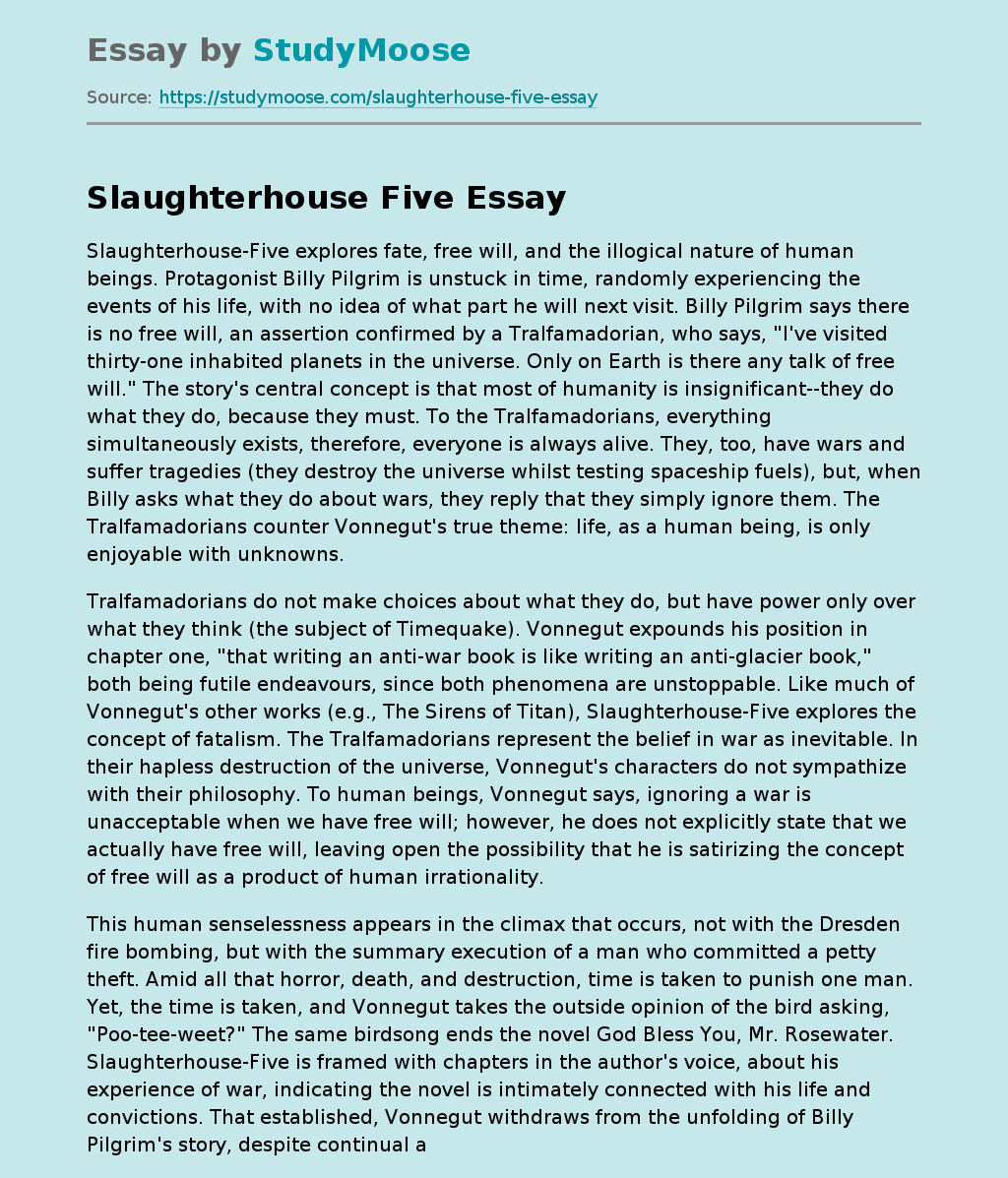