Macbeth And the Power of Fate Vs Free Will

Fate has the power to create one’s destiny. By some wild power, the result of an individual’s decisions is controlled by how they are planned to happen. In other words, some believe these choices can challenge fate, and that fate only manipulates one’s mind into choosing their way. One of the questions that were brought up multiples times in our class discussion was whether individuals were victims of fate or their own choices/actions and if each aspect plays a significant part in determining their destiny.

Don't use plagiarized sources. Get your custom essay on
“ Macbeth And the Power of Fate Vs Free Will ”
Get custom paper
NEW! smart matching with writer

In the play Macbeth, by William Shakespeare, Shakespeare messes with the idea of destiny, presenting the fate of Macbeth before him, permitting his ambitions and desires to drive him crazy to attain it. At the start of the play, Macbeth is shown as a decent man. However, he chooses to submit, not one or two, yet a progression of ruthless activities that solitary he had the ability to control. If fate were real, then the outcome of a person’s life would be predictable in this case, Macbeth.

If the concept of fate were real, from the moment of birth, your life would have already been planned, and you would not be able to change it. Was Macbeth a casualty of destiny and did the decisions he made have some impact on the result of his destiny, leading to his death?

In the play, Macbeth had been given all these prophecies, that all seemed to come true; he played an essential role in those due to the choices he made.

Macbeth is not the slightest bit under a spell or curse; he decided to make a way of evil for himself. The ability for Macbeth to determine his fate showed up not long after Macbeth had chosen to stop and listen to the witches. He showed us that the witches were saying was important to him. “Stay, you imperfect speakers, tell me more (Shakespeare 1.1.70).” Before Macbeth came upon the witches, he was clueless about what would occur in the close-by future. Yet after his experience with the witches, his mind was going back and forth, trying to make sense of how to act upon the predictions of being king. Now the idea of fate had been planted into his brain, and with such good title to accompany it, is there any valid reason why he would not have any desire to accept his destiny.

Something I found intriguing about the witches in (Shakespeare 1.3. 24) where one of the witches states, “Though his bark cannot be lost, yet it shall be tempest-tossed.” From what I understood, these lines appeared to demonstrate the limitation to the witches’ powers, they were stating that they could make life harsh for the clueless captain, yet they could not kill him. I think that this is important to all the people who believed that the witches had written out Macbeth’s fate. In the same way as the previously stated scene, they can lure Macbeth with a prediction about his future, yet they can’t make him pick evil. One of the conflicts is fate vs free will. All the witches did was find a way of stirring up some evil, by enticing Macbeth into choosing evil in its place of good. “If chance will have me king why, chance may crown me, Without my stir (Shakespeare 1.3.144).”

Now, Macbeth appears to be content to leave his future to possibility. If possibility will have him crowned king, at that point, there is no purpose for Macbeth to lift a finger towards King Duncan or anyone else. “The Prince of Cumberland-that is a step on which I must fall down, or else o’ erleap for in my way it lies. Stars hide your fires let not lights see my black and deep desires. The eye wink at the hand yet let that be Which the eye fears, when it is done, to see. (Shakespeare 1.4. 48)” In the previous quote, Macbeth seemed happy to sit back and let his fate unfold. When Macbeth discovered that King Duncan had named Malcolm the Prince of Cumberland and beneficiary to the crown of Scotland, Macbeth decides he should make a move to overleap to what currently seems to hinder his way to the position of royalty. He recognizes that his desires are evil. So, it is evident that he’s chosen to commit the act of murder to make the witch’s prophesy come true.

Was Macbeth’s destruction brought about by free will or fate? One way of looking at this could be by saying. In the play, the external powers could have controlled Macbeth. All things considered, the witches predicted Macbeth would become king. (Shakespeare 1.3.48-50) They also knew the specific conditions of Macbeth’s destruction (Shakespeare 4.1), which could propose that Macbeth had no influence over his own destiny. Then again, in the play, we observed Macbeth arranging the killings, and then settling on his own decisions and putting his plan into action. And of course, this is obviously his own free will. He chooses it. I without a doubt accept that it was his free will the entire time, and that the witch’s destiny began a sparkle in Macbeth’s desire, which made him leave his mind and lose whatever piece of sanity that was left. A statement that I found to back up my thinking to this was when Macbeth states, “I am settled bend up Each corporal agent to this terrible feat. Away mock the time with fairest show; False face must hide what false heart doth know (Shakespeare 1. 7.80).” I think here it truly gives us that Macbeth was not constrained by his destiny, but by his free will. I say this because, the witches never truly said anything to Macbeth regarding killing Duncan, or Banquo. To make the prediction work out as expected, Macbeth did it all by himself. I feel that it gives us that it was not fated for Macbeth to get the position of royalty; his actions got him the throne in manners that the witches had not ever referenced. Returning to the past passage, “Though his bark cannot be lost, yet it shall be tempest-tossed. (Shakespeare 1.3.24)” I believe that this statement is noteworthy because this is the place we are demonstrated that the witches aren’t as incredible as though to be.

All this time, people believed that the witches had written out Macbeth’s destiny. However, none of them at any point halted to consider how incredible the witches for sure were. This shows that perhaps the witches did not have any fate planned for Macbeth; they were searching for someplace to work up the struggle and saw the ideal open door with Macbeth. I mean, after all, they are witches, working up inconvenience comes part of the job. The witches realized that Macbeth was an ambitious man, that all he truly required was to be given a little push. When the witches expressed to Macbeth about their supposed prophecy, it was all he wanted to hear. If Macbeth were a wise and noble as we saw at the beginning of the play, then perhaps would have taken the time to consider that what they were saying was pointless. Instead, he let the prediction get into his head which gave him the extra push to the already present desire for power.

To conclude, I would like to address my question: Was Macbeth a victim of fate, and did the choices he made have an impact on his destiny. To me, Macbeth was not a victim of fate. Like I had recently stated, the witches had just planted the thought into his head since stirring up trouble is their nature, yet that doesn’t mean it implied anything. Macbeth has always had that bit of ambition inside of him, the one in which he imagined being king. I imagine that Macbeth utilized the prediction to remove the blame from the desire he was feeling. He utilized it to direct himself, yet no piece of it had to do with destiny. It was all of Macbeth’s free will. Every time he killed someone, he thought that he had to kill those that stood in the way of his fate. All the choices Macbeth made impacted his future, and no, it was not because of fate. It was because Macbeth had a spark of ambition, which was rubbed against a prophesized fate that then turned into a huge disaster. The witches gave him something to consider as his future.

However, it was nothing set in stone. All through the play, Macbeth continued building onto his fate, accepting that fate was destiny and that he could not be able to stop it. Each time he killed somebody, he believed that he needed to kill those that stood in the way of his fate. All the decisions Macbeth made affected his future was not a result of fate. It was Macbeth; he had a flash of desire, which was scoured against a prophesized destiny that at that point, transformed into an immense catastrophe. Overall, I believe Macbeth is accountable for what occurred during each second of his life, and that fate was not driving him to his destiny. After a while, Macbeth began to lose his mind and overlook what he was doing in the first place. The idea of fate vs free will is significant in the play; it truly gives us an understanding of Macbeth and his character.

Macbeth And the Power of Fate Vs Free Will. (2020, Nov 14). Retrieved from http://studymoose.com/macbeth-and-the-power-of-fate-vs-free-will-essay 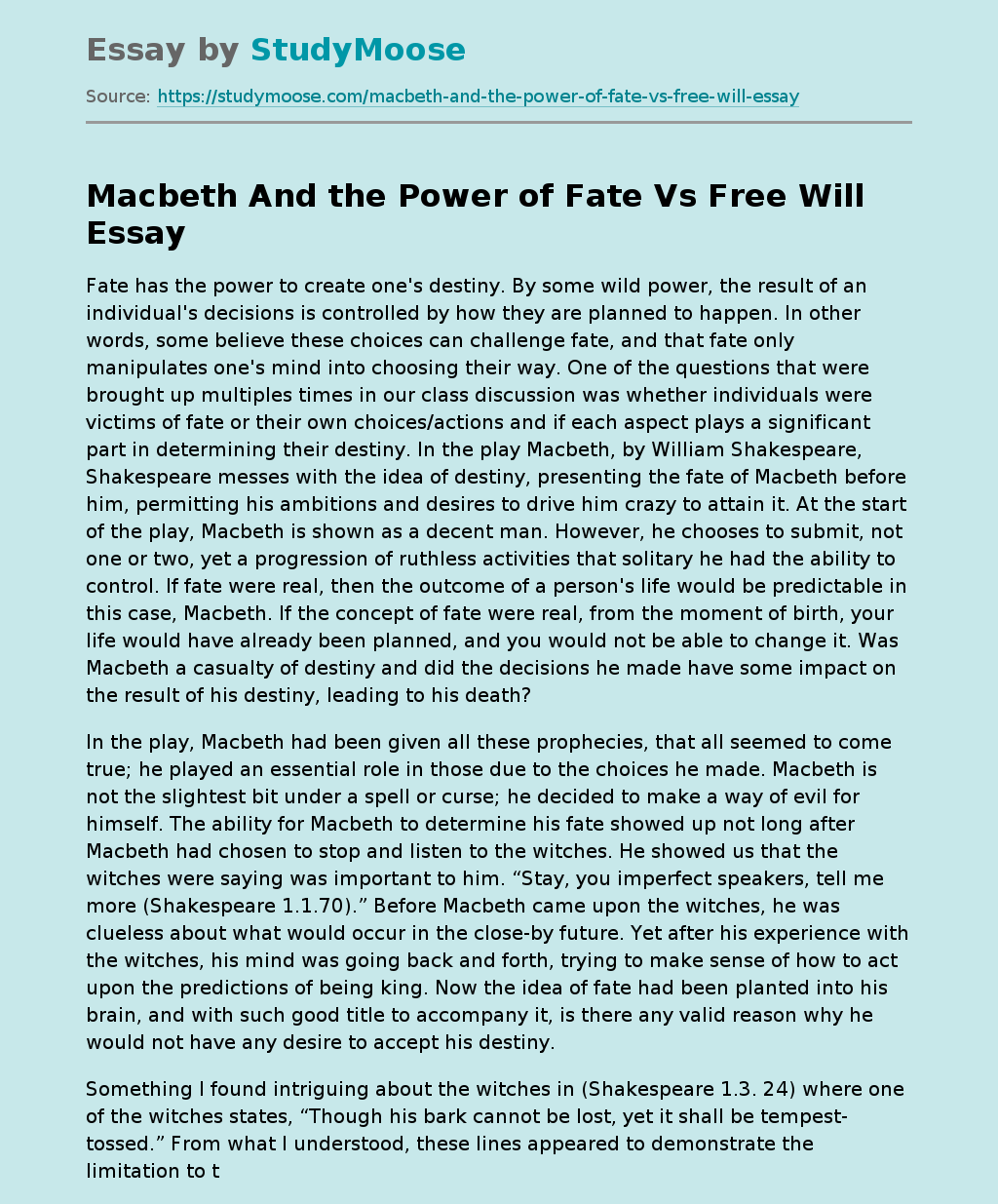