Fate or Free will Romeo and Juliet

Fate: Is it just an excuse?

Excuses are something people use to clear themselves or others of the blame of their own foolish actions. In Shakespeare’s Romeo and Juliet, it is not fate, but impulsive and desperate actions that bring about the downfall of Romeo and Juliet. In the Victorian era, fate was known as the development of events out of human control, and determined by a supernatural power. By no means was the demise of Romeo and Juliet out their control.

Don't use plagiarized sources. Get your custom essay on
“ Fate or Free will Romeo and Juliet ”
Get custom paper
NEW! smart matching with writer

It happened because of the choices they themselves to make.

Romeo always blames his own reckless actions on fate. Romeo is warned not to go to the masquerade party but tells fate to “steerage of [his] course” and “direct [his] sail” and goes anyway. Romeo knows himself that he will die if he goes but still chooses to go. Romeo decides that whatever happens is up to fate and it’s completely out of his control. Also, after killing Tybalt, he calls himself “Fortune’s fool” and realizes he will be punished severely (Rom 3.

1.142). Romeo is basically says he is a subject to the whims of fate. He thinks fate is playing around with him and not taking responsibility for what he himself did. However when he hears of Juliet’s “death” Romeo tries to “defy the stars” and kills himself (5.1.25). Romeo is taking responsibility for his actions by trying to defy his “fate” and finally taking thing into his own hands. This doesn’t work, since he didn’t bother to check if Juliet was still alive and just kills himself in his attempt to be together with her, even if it’s in death.

Romeo uses fate to justify his actions and say that a power outside of his control fueled his action, but instead everything was just his impulsive choices.

Juliet makes reckless and impulsive actions knowing very well what the consequences could be, and then blames it on her unavoidable fate. When Juliet first sees Romeo at the party, Juliet tells the nurse to “go ask [for his] name. If he be married” and says that her grave is “like to be [her] wedding bed”, foreshadowing her own death (1.5.148). Juliet wants to know if Romeo is married, and she is just a thirteen year old girl who saw Romeo the first time in her life. Juliet is the one that eventually proposes to Romeo, and she does this knowing to be married means her own death. When Romeo visits Juliet on her balcony that night, she says she has “no joy of this contract tonight, it is too rash, too unadvised, [and] too sudden’ about Romeo swearing his love to her. Even before they are married, Juliet already knows their actions are impulsive. Combined with the fact that she even foreshadows her own death, she still rashly decides to marry Romeo. This wedding was by her own choice and not like the one where her parents force her to marry Paris. In addition, after Romeo leaves Juliet after their only night together, Juliet pleads to fate to “be fickle”, and to “not keep him long, but to send him back” to her (3.5.63). She also hopes that since Romeo is “renown’d for faith” unlike fate (which is fickle) fortune should be kind to him. She is excusing his killing of her cousin Tybalt with the fact that fate is unreliable and unpredictable. It wasn’t fate being unpredictable, it was Romeo losing his cool and acting rashly. Juliet shows that she knows the consequences of her actions, but goes forth with them anyways.

Friar Lawrence’s reckless actions brought together the deaths, and he blames them on fate. When Friar John tells him that the letter couldn’t be sent, Frair Lawrence decides to blame it on “unhappy fortune” and not himself (5.2.17). He is a grown man, but decides to let Friar John travel alone to deliver the message. Instead of sending the message himself, he gives the crutial task to people that aren’t even involved. Knowing this, he blames his own blatant fault on fate being unhappy. Also, when Friar Lawrence walks in to see both Paris and Romeo dead, he says it is “lamentable chance” that they are dead (5.3.151). Again, fate is blamed for something easily avoided. He is saying that it was out of his control that the two died, but Frair Lawrence was the one who married them and masterminded the plan in the first place. Not only that, when Juliet awakens the Friar tells her “a power greater than [they] can contradict has thwarted [their] intents” and as a result, Romeo is now dead (5.3.158). When he talks about a power that could not be resisted he is talking about fate and how fate ruined the plan to reunite Romeo and Juliet. He was the one that botched the sending of the message to Romeo. The Friar just doesn’t take any responsibility at all for his actions and opts instead to blame uncontrollable forces.

Throughout Shakespeare’s Romeo and Juliet, the characters’ own impetuous and brash choices, not fate, bring about the deaths. Characters repeatedly used fate as an excuse by saying the series of events were completely out of their control. In contrast, everything could have been avoided if the characters just decided to think rationally. By having them blame fate, Shakespeare is asserting that people need to take responsibility for their own actions. They should realize it is their own choices that affect the future, not fate. People’s destinies can be changed, and it is not predetermined by an all-powerful force.

Fate or Free will Romeo and Juliet. (2016, Feb 28). Retrieved from https://studymoose.com/fate-or-free-will-romeo-and-juliet-essay 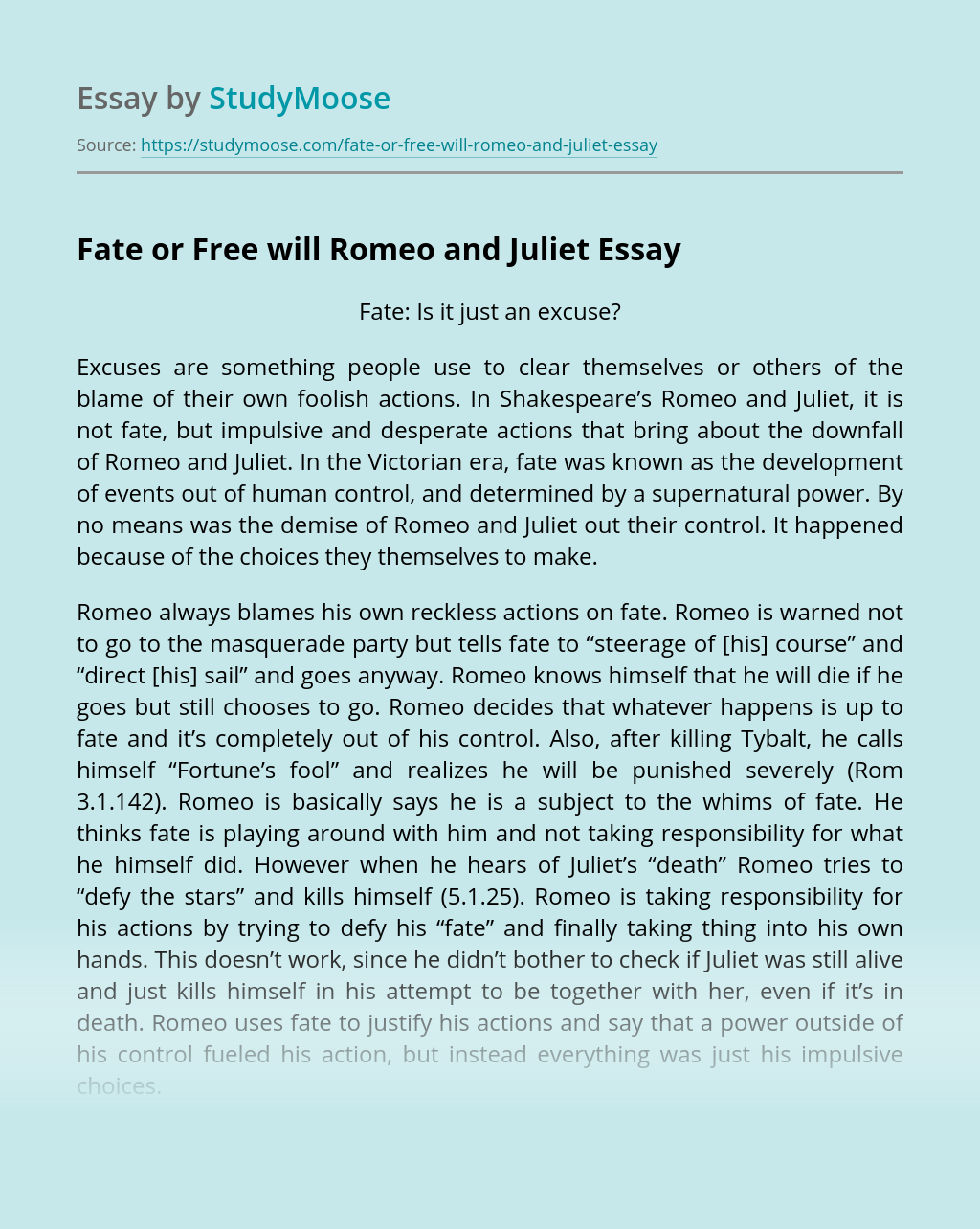