Although “Romeo and Juliet” Was Written by William Shakespeare in About 1600, Its Themes of Fate and Death, Love and Hate Are Enduring Concerns for Us Today. Discuss.

3. Although “Romeo and Juliet” was written by William Shakespeare in about 1600, its themes of fate and death, love and hate are enduring concerns for us today. Discuss.

~
“Romeo and Juliet” is a tragedy, written by the renowned Shakespeare in the 1600’s, which has remained a popular play for many people today. It tells the story of two star crossed lovers whose fleeting romance is ended by tragedy. The reason that this play is so appealing to audiences’ today lies within the main themes of the play – love and hate, death and fate.

Don't use plagiarized sources. Get your custom essay on
“ Although “Romeo and Juliet” Was Written by William Shakespeare in About 1600, Its Themes of Fate and Death, Love and Hate Are Enduring Concerns for Us Today. Discuss. ”
Get custom paper
NEW! smart matching with writer

Because of the enduring the components of these themes, the lessons and experiences found in the book can be easily relatable to the people of our time. The themes of love, which we will see comes in many forms, are all easily related to situations that many people will face in our times. Hate is also a theme which has continued from Shakespeare’s time to now and largely effects communities today.

Death is a theme that everybody can relate to, and the reasons for the deaths in Romeo and Juliet can also be applied to certain people’s death. The theme fate is not so easily applicable to today’s society as the other themes, but there are many exceptions and the concepts behind fate can still apply to us today. But the first theme to be discussed will be that of love.

One of the most obvious themes in the play is Love. Within the play, there are a couple of types of love displayed – a fleeting infatuation and a genuine love.

The fleeting love can be seen at the opening of the play where Romeo claims to be in love with the maiden Rosaline. His crush on Rosaline leads him to do thoughtless things, which Montague tells us when he says: “Away from the light steals home my heavy son and in his private chamber pens himself, shuts up his windows, locks fair daylight out, and makes himself an artificial night.”(Act 1, scene 1, page 29) Romeo locks himself in his room and weeps over her, but as soon as he sees Juliet, his love for her instantly vanishes. Many people can relate to this today because growing up they are bound to have brief infatuations that, although fleeting, may also make them do some unwise things. And secondly, the genuine love of Romeo and Juliet. For these two, it was love at first sight, but evidently it was an everlasting love. In comparison to Romeo and Rosaline’s love, Romeo and Juliet show a much deeper, passionate love. They speak to each other in poetry and are even willing to risk their lives and kill themselves for each other.

In the balcony scene, Romeo even says to Juliet: “I am no pilot yet, wert thou as far as that vast shore washed with the farthest sea, I should adventure for such merchandise” (act 2, scene 2, page 52) This means that he would go to the ends of the earth, no matter how dangerous or difficult it was, just to reach Juliet. One modern example of this love would be from September 3rd 2010. Brian Wood and his pregnant wife Erin were driving to meet family when a car raced head on towards them. Brian immediately spun the wheel to the right, making sure that only he would be hit with full impact from the car. Brian was killed, but Erin walked away with only a few bruises. That is only one of many thousands examples of love that we see today. Love is a concept that can be grasped by people from around the world at any time in history. On the other hand, “Romeo and Juliet” also provides us with the theme opposite of love – hate. Hate is a strong theme in “Romeo and Juliet”, ultimately leading to the death of several characters. The opening scene of the play shows us the rivalry between the two rich families, the Montagues and Capulets.

The long-lasting feud causing destruction and havoc within the city of Verona. There are many gangs today that share the same behavioural traits of the Capulets and Montagues back then. For example, there were many fights fought in the play over small issues. For example, in Act 1 Scene 1 when Sampson and Gregory see people from the house of Montague approaching, they discuss ways of provoking them to start a fight, saying things such as: “I will bite my thumb at them, which is a disgrace if they bear it” and “Draw, if you be men.”(Act 1, scene 1, page 26) The people of the Capulet house go purposely looking for a fight. Whereas the gangs today will fight over matters such as territory, respect and drug turf and will purposely go out looking for fights so they can look more superior to other gangs. Another scene where we see this theme is in the scene when Mercutio dies and Romeo says: “Away to heaven respective lenity, and fire-eyed fury be my conduct now!” (Act 3, scene 1, page 71) Here Romeo wants to avenge Mercutio’s death by killing Tybalt, even though he originally did not want to fight Tybalt because of his marriage to Juliet, Tybalts cousin. This can be compared to gangs, who will not leave any type of disrespect unanswered in fear of losing their reputation or respect. Sometimes, when the hatred of one another gets out of hand, it can lead to the next theme, death. The death of six characters throughout “Romeo and Juliet” makes death significant theme, as well as presenting the play as a tragedy. All of the deaths in the play were a result of the feud between the Montagues and the Capulets, whether it was suicide or murder. The theme of death is universal theme Shakespeare highlights in his plays that has not changed through the years. Death is an everlasting concept and there will always be application for it in the world, whether it is today or 411 years ago. In order, there were the deaths of Mercutio, Tybalt, Paris, Romeo, Juliet and finally Lady Montague.

The two most prominent deaths were of Romeo and Juliet who, after a failed plan to avoid Juliet’s marriage to Paris, commit suicide. Friar Laurence explains after both are found dead in the tomb, saying: “But when I came, some minute ere the time of her awakening, here untimely lay the noble Paris and true Romeo dead… And she, too, desperate, would not go with me.” (Act 5, scene 3, page 115). One modern application of this happened in October 2010. In that month, there were over five cases of teenage suicide because of harassment at school due to their sexual orientation. This applies the same concepts of the suicides of Romeo and Juliet when they were not able to be with one another because of opposition. The other deaths are results of murders by the opposing side of the quarrel. There have been so many wars and gang fights in our time, it would be almost impossible to name them all. Much like the grudge between the Montagues and Capulets, many have died as a result of the fighting, when it could have otherwise been solved. The reason behind the grudge between the Montagues and Capulets had been long forgotten, as has the reasoning behind the conflict between gangs. Another factor that can also be blamed for the death of certain characters is fate. Fate is perhaps one of the most important factors in the death of the two protagonists. “Romeo and Juliet” is a tragic play where the characters have no awareness of their ensuing downfall.

In the time the play is set, fate and destiny were huge concepts that were definitely factors that affected the decisions made in their lives. But in today’s society there are less and less people who think that there is anything that is meant to be or supposed to happen, and instead think about ways to get around problems and that there are many different outcomes for each of our actions. They believe that they have their own free will and their futures are determined by the decisions they make. This theme, although not very directly, is still applicable to us now. There are still people who do believe in fate, just as in the 1600’s. There are many people such as psychics or fortune tellers who make their living out of telling people their destinies. But the majority of society may not think of their lives as being predetermined by some force, many decide to follow their gut feeling in making decisions. Before going to the Capulet’s party and meeting Juliet, Romeo says: “I fear, too early.

For my mind misgives some consequence, yet hanging in the stars”(Act 1, scene 5, page 42) Here Romeo is scared and doesn’t feel as if he should go to the ball because he thinks there is an event destined by the stars that is going to happen that night. Similarly, today there are people who will base their decisions on how they feel and the consequences of that action. Almost every single person at some point in their lives will question themselves, asking things such as: What is my purpose in life? Having a purpose in life is like having a destiny. You may not know what it is, and you may not know how to find out. There are many different opportunities and choices that are met, but as you live your life, every decision that you make up to a certain point leads you to the answer of your question. There are many ideas behind the themes of Romeo and Juliet, all of which have endured down to today. With the universal concepts of the themes of love, hate, death and fate we find that the lives of the Montagues and Capulets were much like the lives that we live today. Of course the situations they were in were different, but the same lessons can be learned and the same themes are applied to daily life. So as Juliet said in the balcony scene: “What’s in a name? That which we call a rose by any other word could smell as sweet.” (act 2, scene 2, page 51). Just as a rose would smell just as sweet if called by any other name, the themes of “Romeo and Juliet” and its lessons are just as impressive when applied to the different situations in different time periods.

Although “Romeo and Juliet” Was Written by William Shakespeare in About 1600, Its Themes of Fate and Death, Love and Hate Are Enduring Concerns for Us Today. Discuss.. (2016, Mar 22). Retrieved from https://studymoose.com/although-romeo-and-juliet-was-written-by-william-shakespeare-in-about-1600-its-themes-of-fate-and-death-love-and-hate-are-enduring-concerns-for-us-today-discuss-essay 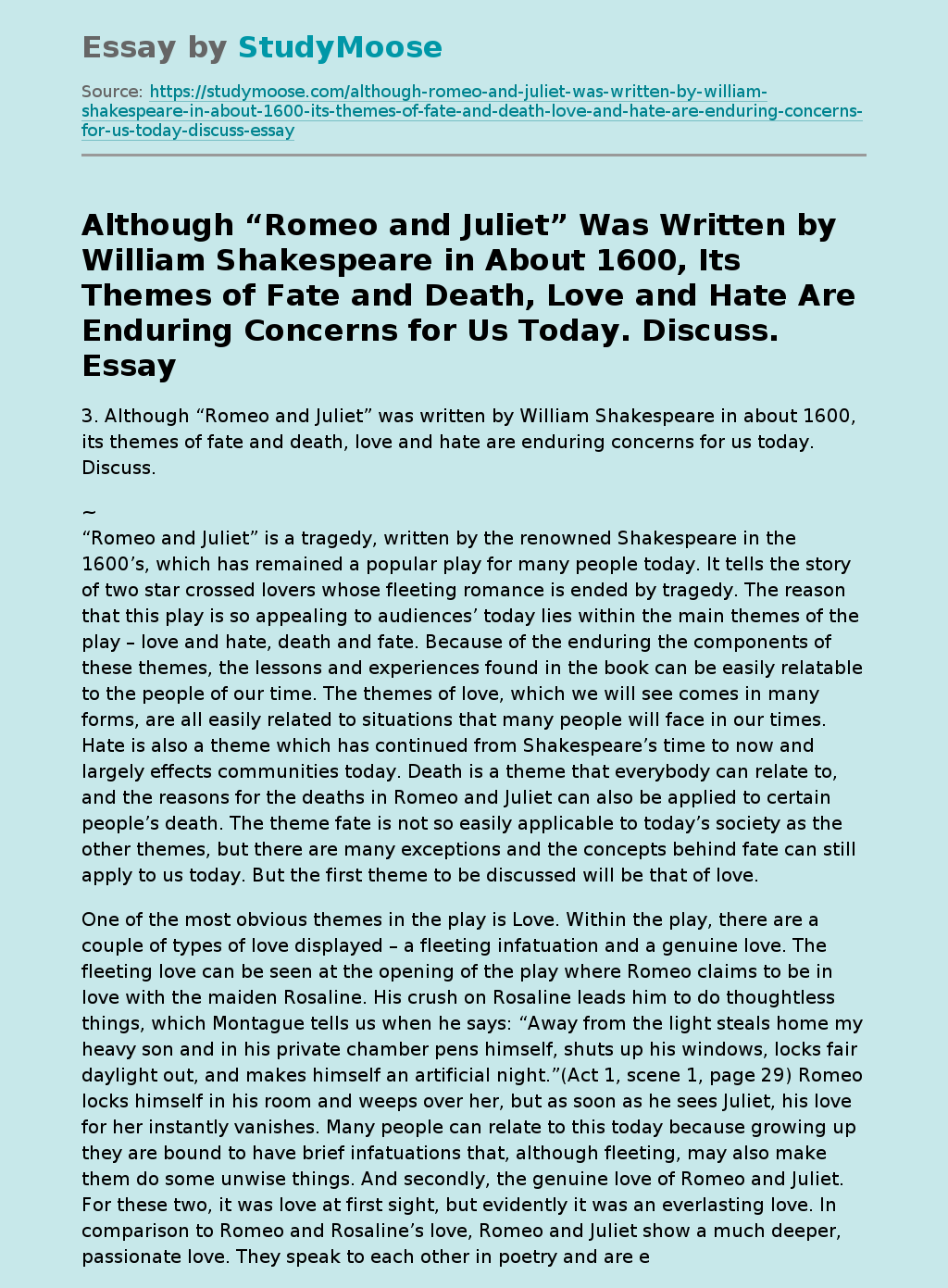