Fate and Free Will in "Macbeth"

Macbeth shall be named as Thane of Cawdor and then king; Banquo, although he shall not himself rule in Scotland, will be father to future generations of kings as the prophecy of the three witches go. It was not fate but free will. Macbeth believed fate would lead him to be king and he believed this meant he would have to kill those in his path. He knew what he had to do to become king and he knew he wouldn’t get caught, however, he also knew he did not need to do anything that would guilt him or Lady Macbeth if being King was his fate.

Don't use plagiarized sources. Get your custom essay on
“ Fate and Free Will in “Macbeth” ”
Get custom paper
NEW! smart matching with writer

True fate would have to come without force like in Oedipus Rex, where he tried completely to avoid the situation yet it all still happens.

The events in Macbeth’s life did not occur because of the witches prophecy but because of his choices and free will. Fate is “the development of events beyond a person’s control, regarded as determined by a supernatural power.

” Yet throughout the whole story Lady Macbeth and Macbeth chose what they were going to do next. Fate is not able to fail because it is what it’s meant to be. If he failed he did so because he was forcing against his true fate. “If chance will have me king, why, chance may crown me Without my stir 1.3.” He realizes that he shouldn’t have to act if its about fate.

Macbeth realizes and debates with himself during the story trying to will fate to be when instead everything was a decision.

Banquo’s sons were meant to be king but Macbeth’s decisions chose to move it along by killing him. The Prince of Cumberland! That is a step “On which I must fall down, or else o’erleap, For in my way it lies. Stars, hide your fires; Let not light see my black and deep desires: The eye wink at the hand; yet let that be, Which the eye fears, when it is done, to see.” Macbeth decides to not wait for chance and decides to do it himself. “The more Desire you have for a thing, the more you Love it; and the more you Love it, the greater will be the attractive force exerted toward its attainment – both within yourself, and outside of you.” he’s starting to get what he wants by forcing it and not letting fate happen. True fate happens by chance, like in Oedipus Rex, when he was young an oracle told him that he will kill his father and fall in love with his mother and end up blinded. He tries to avoid it not knowing that the parents who raised him weren’t his biological parents. When on the path he gets into a fight with a man and ends up killing him which ends up to be his father Lauis. When he was back he was married to a woman named Jocasta. He later figures out that Lauis and Jocasta are his biological parents. When Oedipus goes back to the castle he finds Jocasta on the floor dead, he took the buttons from her dress and clawed his eyes out leaving him blind. He tried to avoid his fate but since it was true fate it was all by chance.

In conclusion it is clear that Macbeth made choices that lead to his demise rather than trusting that fate would lead him to be king. By trying to direct himself to be king by killing people in his path it only lead to his own death, had he trusted fate he would have become king. Macbeth himself acknowledges he made these decisions that ultimately prevented him from being king. He knew the steps he had to take he followed them forcingly leading to his death.

Fate and Free Will in "Macbeth". (2021, Apr 06). Retrieved from https://studymoose.com/fate-and-free-will-in-macbeth-essay 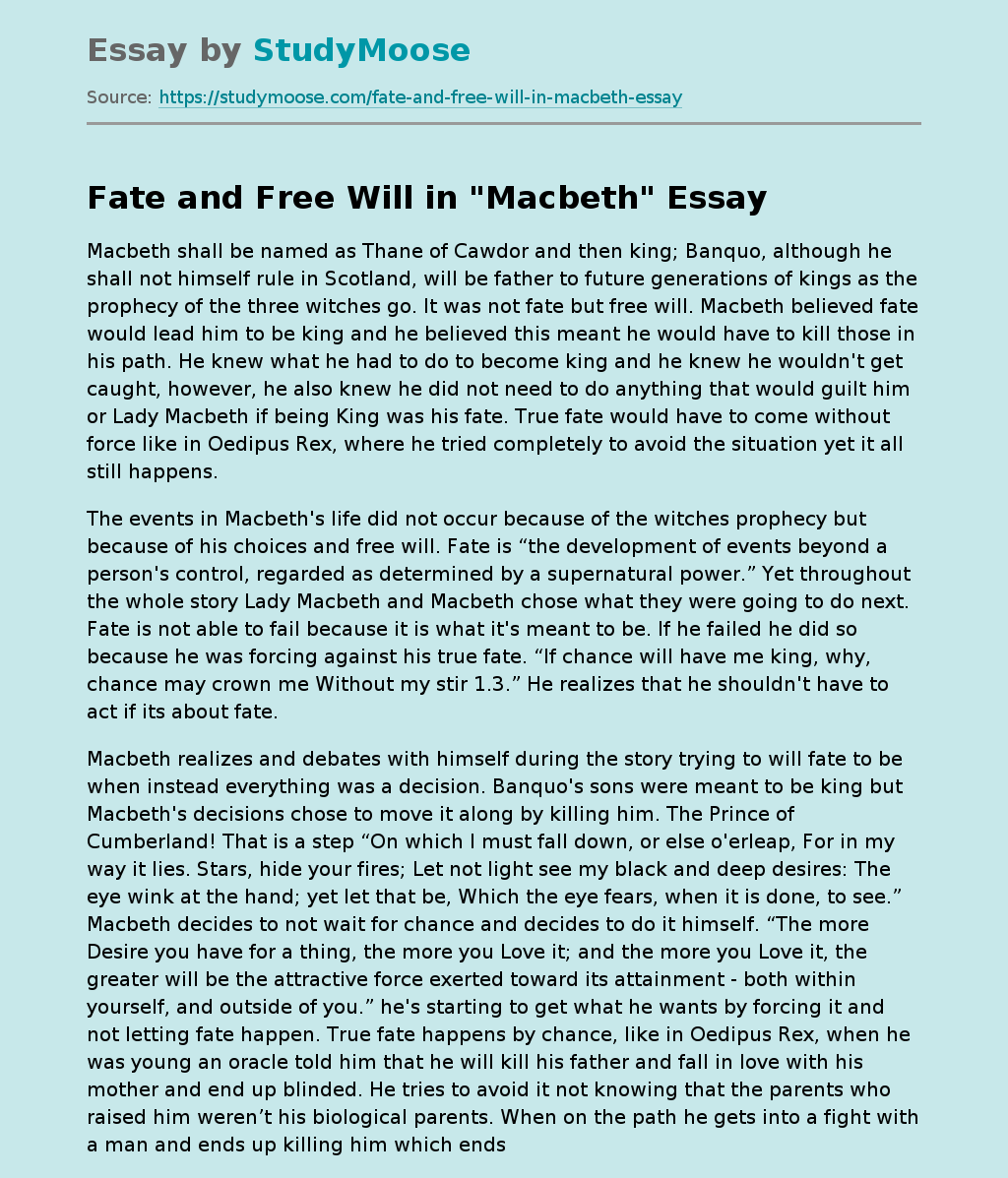