The Destructiveness of War in Slaughterhouse-Five

“There is nothing intelligent to say about a massacre” (Vonnegut, 19). Kurt Vonnegut experienced first hand the Dresden Fire Bombing of World War II. The Dresden Fire Bombing was a massacre that was designed by the allies to kill as many German civilians as possible. Because of Vonnegut’s war torn mind, it took him nearly 25 years to write Slaughterhouse-Five, a fictionalized account of the fire bombing of Dresden and about the destructiveness of war. Slaughterhouse-Five has been widely criticized and condemned, and according to June Edwards, “The book is an indictment of war, criticizes government action, is anti-American, and is unpatriotic.

Don't use plagiarized sources. Get your custom essay on
“ The Destructiveness of War in Slaughterhouse-Five ”
Get custom paper
NEW! smart matching with writer

”(Schmidt, 121). These charges and accusations just help support Vonnegut’s idea that different political ideologies help fuel war and its horrors. In Slaughterhouse-Five the main character, Billy Pilgrim, becomes unstuck in time, moving in and out of World War II and other events in his life that relate to how war has made him insane. Kurt Vonnegut shows the destructiveness of war in Slaughterhouse-Five through the characters, the setting, and through his own personal experiences.

Vonnegut uses the characters in Slaughterhouse-Five to show the destructiveness of war and the psychological affects it has on people.

This is mostly seen in the novel’s main character Billy Pilgrim. Billy is a good character for an anti war book because before he is even in the war he is already very weak, which can be seen by his father throwing him in to the water when he is young to teach him how to swim, but Billy prefers sinking to swimming.

Billy is then pushed into war with very little preparation, with no weapons, and wearing only a toga with a small coat. The irony of this is how he survives while thousands of other more well equipped soldiers die (SparkNotes). And from his state of shock and exhaustion, Billy becomes unstuck in time traveling through all the events in his life. It is in this time traveling that one sees how war has affected his future. Billy eventually gets married and becomes an optometrist. Billy is well off in life and has many material comforts, but they still do not give him comfort from the horrors he experienced in war (Bloom 102). Billy also has two children, which he has trouble communicating with because of his war torn mind. This greatly affects Billy’s son, Robert, who is a delinquent and failure, who later turns his life around and becomes a Green Beret in Vietnam. Robert, turning his life around by going to war, shows Vonnegut’s acceptance of the inevitability of war (SparkNotes).

Billy’s daughter, Barbara, shows how the generation after World War II is still affected, because her development is constantly affected by her father’s war trauma and delusions (SparkNotes). While Billy is in the hospital after his plane crash, he meets a man named Bertram Copeland Rumfoord who does not believe that Billy was actually present for the Dresden air bombing. Rumfoord represents the attitude of how people think war is heroic and glorifying when it is really just destructive and horrifying (SparkNotes). The characters that Billy meets during World War II also show the destructiveness of war. Billy is also saved by a young soldier named Roland Weary. Roland saves Billy because he tries to be heroic in war, but there is nothing heroic about war. Roland Weary eventually dies on the POW train, and his friend Paul Lazzaro proclaims that one day he will kill Billy to avenge Roland’s death. Paul represents how long war affects people and how they can never really escape their experiences. (Bloom 102) Over 30 years pass since the end of World War II; however, Paul still assassinates Billy.

According to SparkNotes, these characters can be described through this statement, “the mass mortality of war results from large-scale ignorance and stupidity coupled with an unrelenting, shameless sense of pride.”(SparkNotes) Even though the characters of Slaughterhouse-Five show the psychological side of the destructives of war, the setting shows the physical damage of war. The setting of Slaughterhouse-Five is important in showing the destructiveness of war. Slaughterhouse-Five does not only take place during World War II, but rather it takes place all throughout Billy’s life. This allows the reader to read about Billy in World War II and then see how the war affects him at later parts in his life.

Vonnegut chooses World War II and Dresden to show war’s horrors. Dresden has absolutely no military importance, but the allies choose to bomb it to kill as many German citizens possible. (Vonnegut 146). It was successful in its mission, killing over 135,000 people (Bloom 95). The POW boxcar shows the cruelty of war. Many people do not even make it to the camp alive. It also shows the irony of how the weak and decrepit Billy survives the journey while the heroic Roland Weary dies. Vonnegut chooses the setting of World War II and Dresden because he experienced first hand these horrors of war.

Vonnegut even uses his own personal experiences to help show the destructiveness of war. Vonnegut served in World War II and survived the firebombing of Dresden. It is because of his experiences that he was able to write the book because he personaly knows the destructiveness and horrors of war (Vonnegut 2). In the first and last chapters of the book Vonnegut speaks in his own voice and talks about his experiences of war. This helps establish a connection between the book and Vonnegut’s real life (SparkNotes). Vonnegut releasing Slaughterhouse-Five during Vietnam greatly helps him get his point across to the American public. This was a time when many Americans were protesting war and realizing that their country had made a terrible mistake (Cox 3). Vonnegut also uses other works of literature that deal with war and massacres, such as The Childrens Crusade, a nineteenth work of literature, and Words for the Wind, by Theodore Roethke, to help relate to his reaction of Dresden (Lundquist 78). Vonnegut also appears in the story after every death when he says, “So it Goes”, by him saying this it equalizes all deaths whether they were accidental or a result of war (SparkNotes).

In the story, Billy encounters Vonnegut in the latrine at the POW camp and Vonnegut tells the reader, “That was I, That was me, That was the author of this book” (Vonnegut, 125). By placing himself in the story, Vonnegut helps support the idea that even though this is a story of fiction the destructiveness of war is still very real. Also in the first chapter, Vonnegut meets with his old wartime friend Bernhard V. O’Hare. While there Bernhard’s wife, Mary, becomes upset with Vonnegut because she thinks he will try to glorify war, but he promises not to do so and dedicates this part of the novel to her. This shows how deeply he agrees that war is horrible and ugly. When reading Slaughterhouse-Five, one can see how successful Kurt Vonnegut was in writing this book and showing the destructiveness and horrors of war.

Through Slaughterhouse-Five’s characters, setting, and Vonnegut’s personal experiences it is easy to see how much war affects the world we live. War affects people both mentally and physically, and these effects can be seen for a long time in people’s lives. If we are to move on as a society, we must put down are weapons and stop killing one another, because there truly is nothing intelligent to say about a massacre. Vonnegut never could say anything intelligent even all the way up to his death in 2007. The only thing said after a massacre is by the birds. And the only thing they say is “Poo-Tee-Weet?” 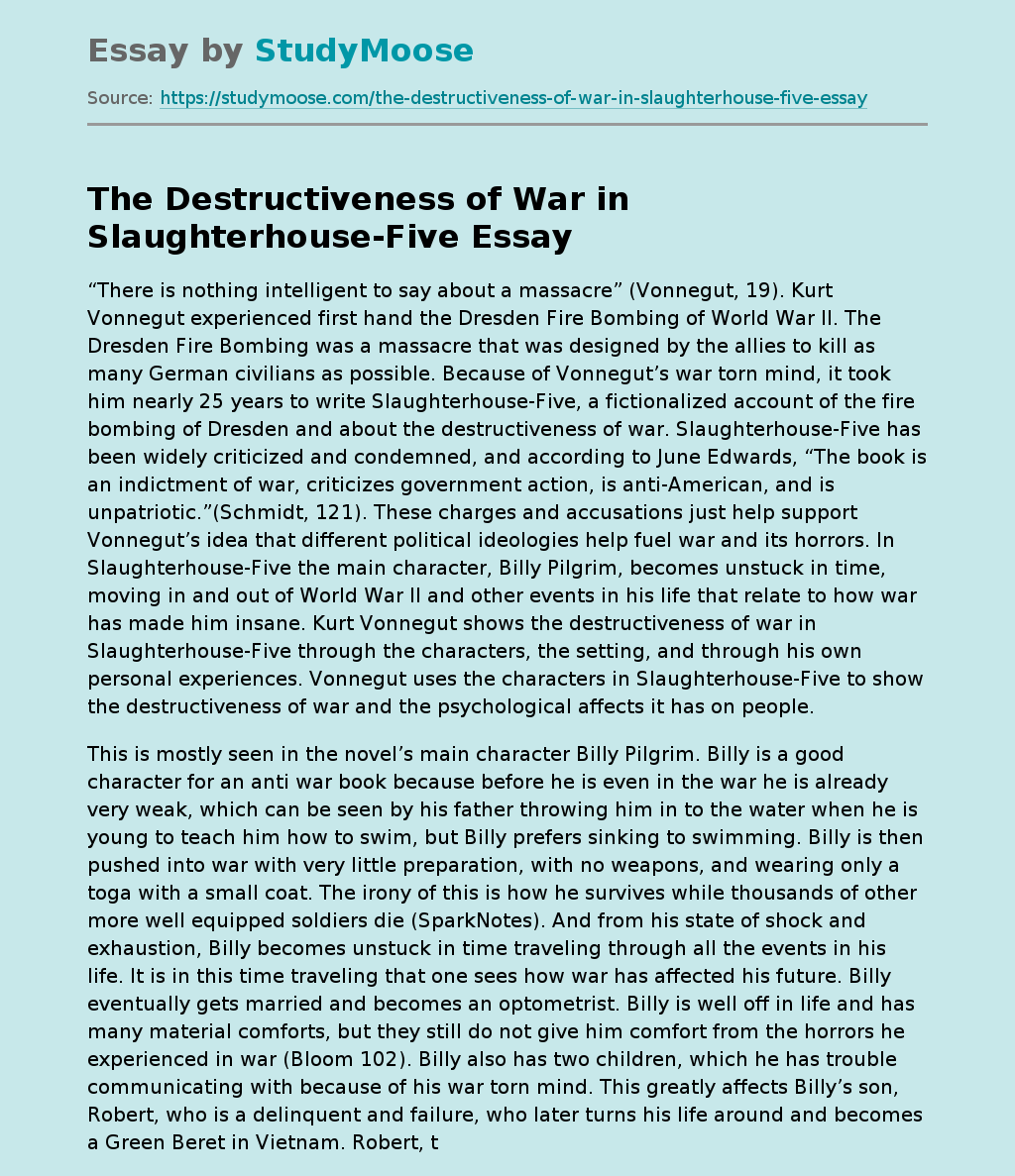