In “War” by Luigi Pirandello, the author writes about peoples’ reaction to war though the eyes of the main characters. The setting of the story takes place in Europe, in a stuffy and smoke filled second-class train carriage. The main characters, a bulky woman-almost like a shapeless bundle-and a fat, red faced man among others, talk about their children at war, and the right to grieve about them. But because of past denial, the characters discover that when confronted with death, they are stripped of their masks and confronted with reality.

Don't use plagiarized sources.
Get Your Custom Essay on “War” By Luigi Pirandello Just from $13,9/Page

In the second paragraph of the story, Pirandello crash-lands the reader into a scene of disorder and despair. I believe that the way the author introduces the characters and the scene-from a seemingly peaceful first paragraph, to a second paragraph full of disorder and despair-is precisely the view of the parents when their son goes off to war. Before the son goes off to war, life is calm and peaceful.

But after he is called to the front, the parents’ lives get shot to hell.

Once the initial shock of loss passes, the parents don masks of stoic bravado in order to hide from their true emotions. As Pirandello writes: “Everyone should stop crying; everyone should laugh as I do…or at least thank God – as I do – because my son, before dying, sent me a message saying that he was dying satisfied at having ended his life in the best way he could have wished. That is why, as you see, I do not even wear mourning…” But towards the end of the story, the bundle like woman, who is still in the initial shock of loss, turns to the fat man and asks, “Then…is your son really dead?” At this moment the fat man is stripped of his mask, and is faced with reality. As his walls come tumbling down, he finally realizes that no matter what his son might have done, he was now gone forever.

In conclusion, Pirandello does a fantastic job of portraying a parents’ reaction to their son going off to war. I believe that the way Pirandello illustrates his characters reflects their inner-feelings. The author also sheds light on the fact that as much as a parent will say that a son belongs to himself and to his country, the parent will never let go of their parental bond and will always mourn for their loss of life. 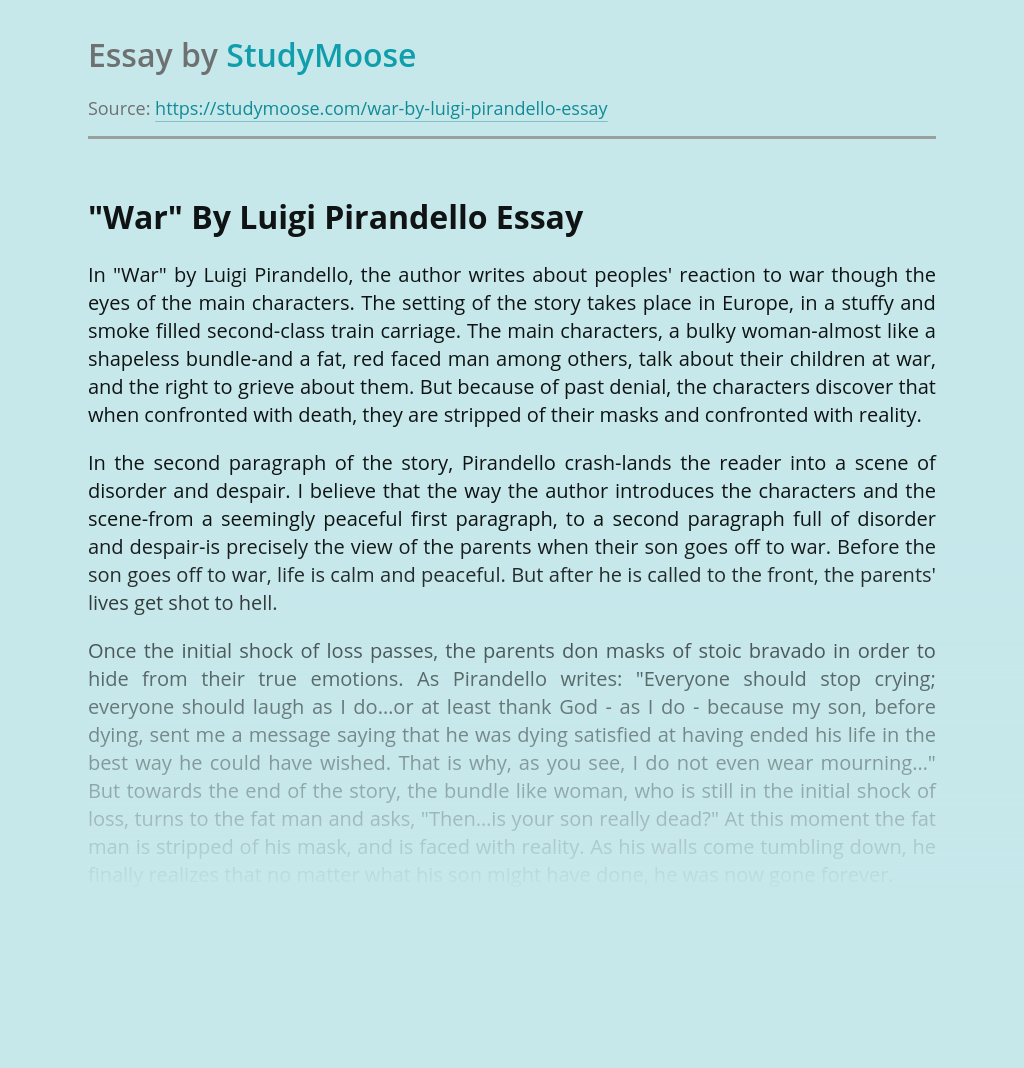 Katherine Mansfield stories "Prelude" and "At the Bay"

Two of Katherine Mansfield’s most famous stories are “Prelude” and “At the Bay”, both of them portraying a New Zealand family. Both stories, are revolving around the female characters, but the one link that connects all of them is Stanley Burnell, member and provider of the family. The New Zealand critic Carl Stead affirms that...

Get Essay
Advantages Of City Life

Appearance Vs Reality in Truman show

Throughout life we are constantly seeing new perceptions of things and in turn constantly changing our perception of reality. The Key concepts of Appearances and Reality were explored through the use of Paradox, Point of View and Verisimilitude, within the texts The Truman show (Peter Weir) and Relativity (Escher). These concepts were used to effectively...

Happiness, sorrow, victory, defeat, day-night are the two sides of the me . Similarly life is full of moments of joy, pleasure, success and comfort apointed by misery, defeat, failures and problems. There is no human being on Earth, strong, powerful, wise or rich, who has not experienced suffering or failure. Life is beautiful but...