Should Parents Be Punished for Crimes Their Children Commit?

Do you think if it was to be your child doing this you should be held accountable for their crime? I believe parents should not be held responsible for crimes that their children committed because they did not force their child/children to do the crime. Since people do have a mind of their own and would probably still do these crimes even if their parents told them not too. The question is, are parents really the core of the problem or are there other bigger issues we have to consider? Many parents have to work day or night to make a living which means they would not be able to watch after their child or children all the time, which means they would not know if the child has taken a gun or a knife to school since they are always busy.

Don't use plagiarized sources. Get your custom essay on
“ Should Parents Be Punished for Crimes Their Children Commit? ”
Get custom paper
NEW! smart matching with writer

The question is, are parents really the core of the problem or are there other bigger issues we have to consider? Punishing parents by law is certainly not the ideal way to handle these rising crime rates.

Though it cannot be denied that parents are responsible to a small extent, they should not be punished by law for the crimes their teenage children commit simply because they have limited influence and control over them. As studies have shown, parents are not the only influence in a child’s behavior. What plays a bigger role is the society. The school and the media are two major components. Typical children in today’s society spend majority of their youth in school, not at home.

In schools, these teenagers are often affected by peer pressure.

They are often blinded by this desire to be accepted and to blend in with the rest of their friends. Many a times, children are influenced by the wrong kind of peer pressure – pressure to behave inadequately, including committing crimes. The media is another powerful influence. The pervasiveness of the media makes it difficult for children to avoid all those violence and negative demonstrations in television programs, movies, music, and advertisements and so on. What children see and hear from their friends or the media are often reflected in their actions. Exposure to such an undesirable environment with many negative influences has instigated them to make the wrong decision and lead the wrong path.

Should Parents Be Punished for Crimes Their Children Commit?. (2016, Mar 30). Retrieved from https://studymoose.com/should-parents-be-punished-for-crimes-their-children-commit-essay 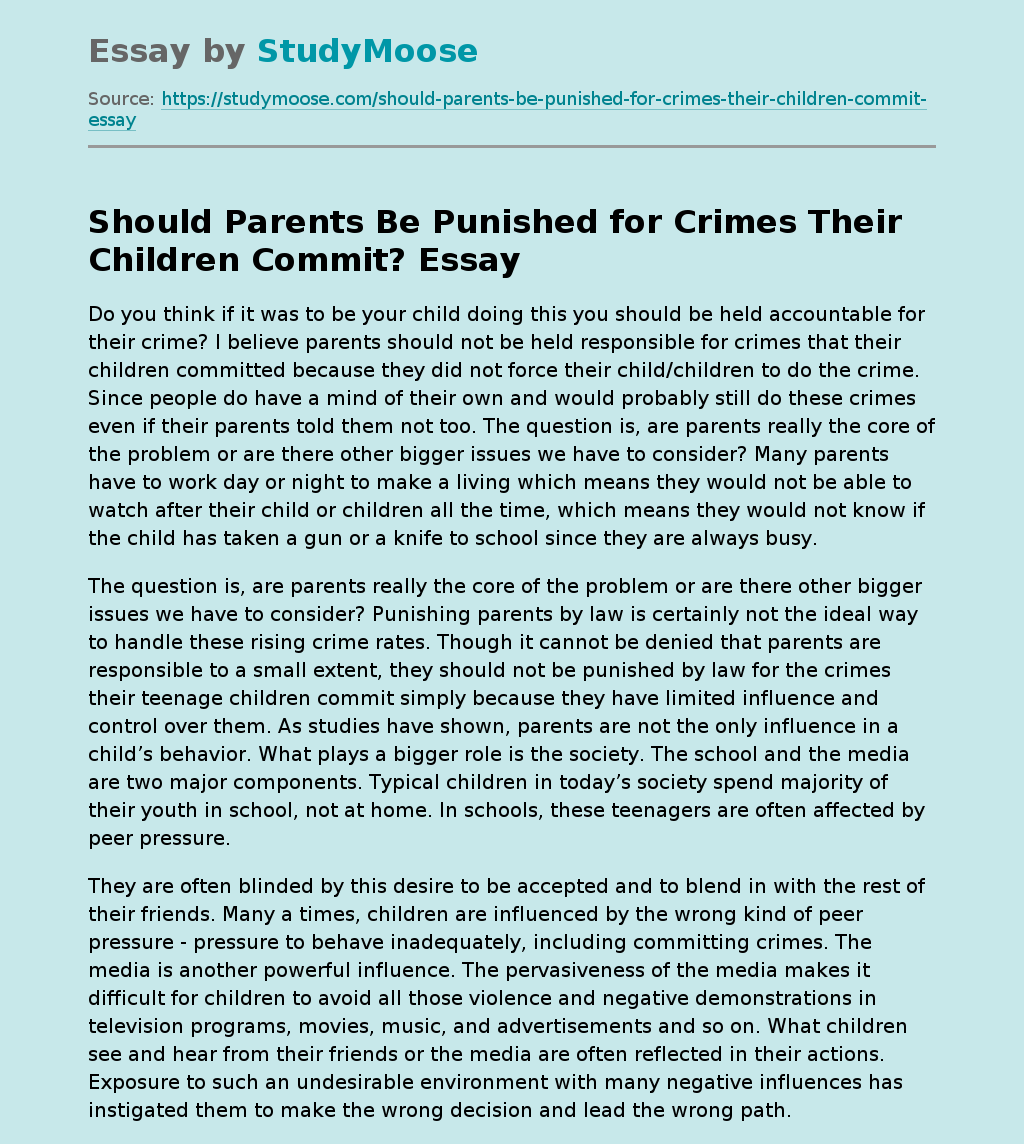