Parents Should Vaccinate Their Children

“Due to recent outbreaks of diseases which until recently have not been seen for decades, such as measles, some governments have introduced mandatory vaccination legislation. These attempts to force vaccinations have focused on vaccinating children, because most of these diseases are not only highly contagious in the school environment, but also a greater threat to children rather than healthy adults. This controversy has raised the debate whether parents should avoid vaccinating their children. After reviewing recent articles of both sides of the debate, I believe parents should vaccinate their children, because the public’s right to be healthy outweighs individual rights asserted against vaccination.

Don't use plagiarized sources. Get your custom essay on
“ Parents Should Vaccinate Their Children ”
Get custom paper
NEW! smart matching with writer

Whether or not vaccinations cause autism

There is a substantial misconception on whether or not vaccinations cause autism. After doing extensive research, there appears to be no real connection between vaccination and autism. According to Dr. Nadia Alam, president of the Ontario Medical Association, the mistruth that studies linked the measles immunization to children getting autism caught on like wildfire in many online sources (Online misinformation).

According to the Center of Disease Control and Prevention, vaccination rates have been consistently high. However, the percentage of children under two years old who are not getting vaccinated is growing (Ortutay). In March, Facebook said they would no longer recommend ads from anti-vax groups that spread false information about vaccines. Scientific studies have shown vaccines are a safe and successful way to fight infectious diseases. A professor who studies social media and vaccines states social media creates echo chambers that can reinforce bad information (Ortutay).

Fortunately, vaccination rates are still high even with social media having such a big influence on the topic (Ortutay). Many parents do not want their children vaccinated due to religious beliefs. Very few states allow parents to opt out of having their child vaccinated for personal, moral or other beliefs. When there is a loose policy surrounding vaccinations, it puts too many children at risk. Washington has a law that allows children to be exempted from required vaccinations if the decision to vaccinate conflicts with the family’s religious beliefs (Tribune). There are many questions about philosophical and religious exemption on social media and in print media such as newspapers (Collin 1).

Personal reasons to not have vaccination

Personal reasons give people too many excuses to not have their children vaccinated, but leave society as a whole more concerned about their health. Parents should not be able to avoid vaccinating their children for any reason that is wholly detached from science (Tribune). Seven year old Rhett Krawitt, suffering from leukemia, expressed his support along with his family for proposed state legislation that does not allow parents to impose their beliefs as jurisdiction to prevent their children from getting vaccinated before entering school (Law to prevent). Ethical and public policy questions are often raised with Refusal to Vaccinate forms (Phillips). Parents of unvaccinated children are often forced to sign a Refusal to Vaccinate form for some pediatricians. Many Refusal to Vaccinate forms coerce parents to choose an option so their children are not vaccinated, but that option often contains language that ignores some reasons for refusal, such as religious or philosophical. With the heightened controversy, many jurisdictions have seen an increase in the amount of Refusal to Vaccinate forms required, with physicians claiming legal reasons for requiring such forms (Phillips).

Society is affected as a whole when children are not vaccinated. Due to the significant increase in infectious disease rates in California, the legislature intervened to stop parents from citing personal or religious beliefs to avoid vaccinating their children (Law to prevent). Particularly, California state officials removed the ability of parents to cite personal belief as a reason for exempting their children from vaccine requirements (Texas minimum). However, the trend toward mandatory vaccinations of children is not consistent throughout the United States. For example, in Rockland County, New York, a judge lifted a ban on unvaccinated children. The ban prohibited unvaccinated children from going out in public places for 30 days (Judge lifts ban). Not everyone agreed, however, with the judge’s decision to lift the ban. Rockland County executive Ed Day said, he feared for the well-being of pregnant women and children because they would be put at risk and could suffer life-threatening complications (Judge lifts ban).”

This debate, going on throughout the United States as well as in many other parts of the world, is not over. In spite of this ongoing debate, scientific evidence overwhelmingly supports the proposition that parents should vaccinate their children. Simply stated, there is no scientifically established causal connection between childhood vaccinations causing autism or any other debilitating disease or permanent condition. While philosophical and religious concerns are important, the permanent and serious consequences of not being vaccinated are often irreversible. We should also not forget who is really getting hurt by decisions not to vaccinate? The children; they are the true victims here. Finally, society as a whole is affected when a child is not vaccinated. It is the public’s right to be healthy and it outweighs individual rights asserted against vaccination.

Parents Should Vaccinate Their Children. (2021, May 20). Retrieved from https://studymoose.com/parents-should-vaccinate-their-children-essay 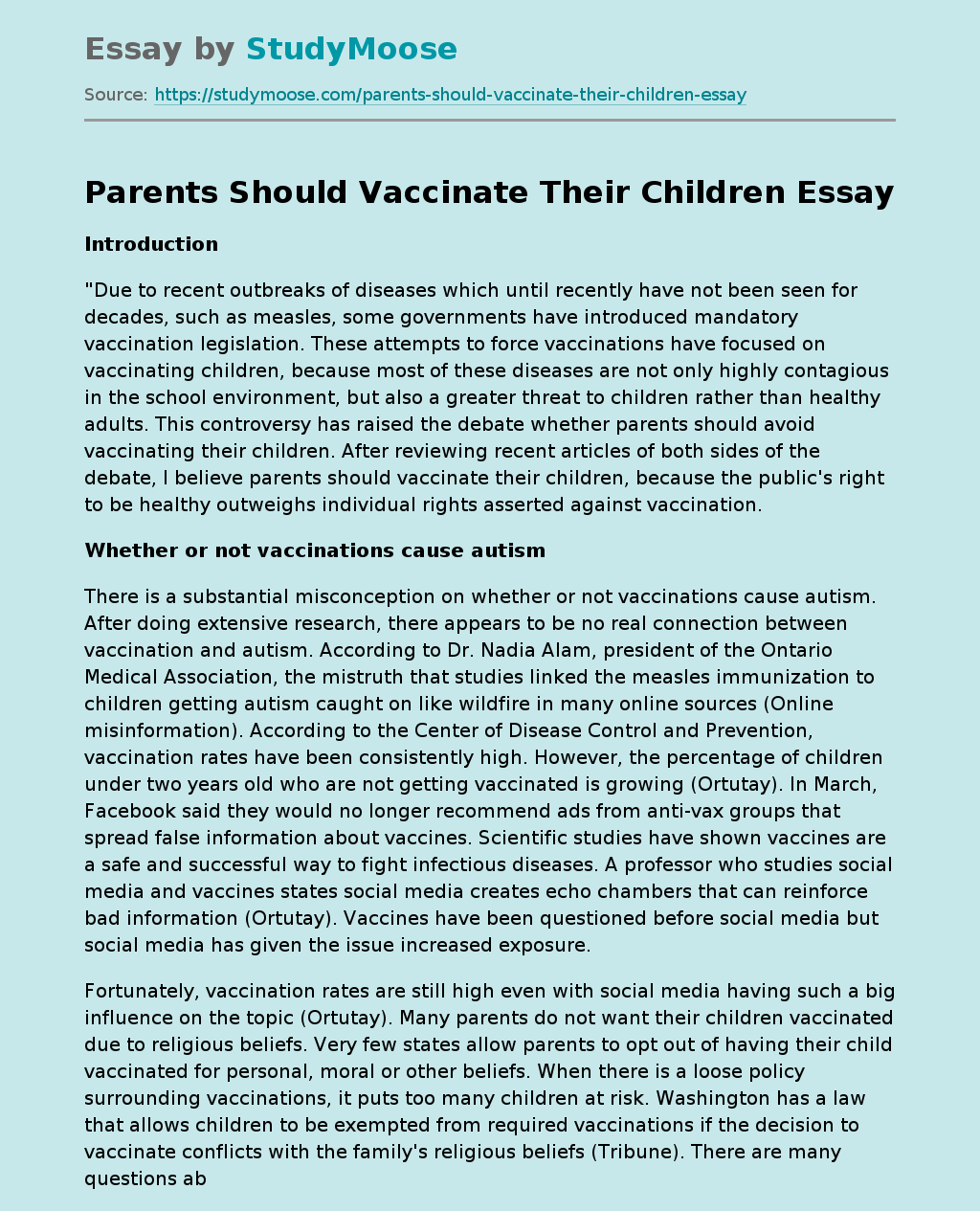