Should parents smack their children

In this essay I am going to outline and assess the effects of smacking children and what the consequences are in later life. I will use evidence and statistics and evaluate the outcome of them.

Do you want your child to grow up with violence, theft, drugs and bulling? Dr Phill Jones argues that children who were smacked as a child are more likely to bully, use drugs and get involved in violent crime. Children may not always feel safe out in the real world and the one place they should feel safe is in their own home.

Don't use plagiarized sources. Get your custom essay on
“ Should parents smack their children ”
Get custom paper
NEW! smart matching with writer

Based on research carried out in 2002, more than 90% of parents in the USA use physical punishment. It suggest without making empirical conclusion that parents who do not use physical punishment have on average better behaved children and that such punishment while a good way to force conformity in early life will tend to cause devoting behaviour when the child grows up. Thus a way to help minimise crime in society could be to ban this type of punishment.

Graham Turner, a sociologist, says that smacking can grow into more serious forms of abuse. He says parents smack their children because they are unable to explain and teach a child what is right and wrong and they smack them because their kids won’t respond to any other form of discipline.

In my personal experience, I was smacked by my father. There was one time that I have always remembered, he was shouting “Who has took the plug off the iron?” There were five of us altogether and nobody owned up.

He said “Who ever has taken it off will get ten sweets!” I quickly said “I did it” to get the sweets, bearing in mind I was only five. He shouted “Right, instead of ten sweets, your having ten slaps” He bent me over his knee and slapped my bottom. I was really upset as he knew it wasn’t really me so why lie and bully just because he had authority, and for him to slap me over and over again was just wrong. He was always smacking us just because he could. He also started to use violence behaviour towards my mother and at the age of six we moved from Ireland to England to get away from him . This shows that some parents who smack their children can not control themselves and it can grow into more serious forms of abuse. In addition, when I was a teenager my mum used to smack me but very rarely and it certainly wasn’t a beating, it was a quick over – the – knee – smack – done.

However, these smacks were infrequent enough to stop me from doing wrong. I really don’t remember much about the circumstances as it was such a long time ago but I know my mother never had any bad intentions and I have always respected her. I always knew it was my own fault that I got a smack and it made me think twice about doing it again. In spite of this, it has never made me a violent person in fact it has made me the person I am today, a very respectable young lady with a child whom I have never smacked. The discipline I use is the naughty step which works really well. She gets time out to think and calm down. When I tell her that the three minutes are over she comes and gives me a big cuddle and apologises. I think this method is perfect for us as it gives us enough time to cool off and for my daughter to realise that what she has just done is not acceptable behaviour.

Some parents use smacking as a form of discipline and they think it’s a good form of punishment as it teaches respect. In a resent survey, 1500 teenagers aged 13-16 were asked if they would rather be smacked or grounded. Only a tiny 7% of these teenagers said they would rather be smacked. One participant claimed that her father smacks her with a wooden spoon when she misbehaves, even for minor things such as refusing to go to bed. She said it hurts and leaves a red mark but she would rather have that than be grounded, because it is over quick. Another participant says its not the actual smacking that hurts, rather the idea that your parents have hit you. It made him feel hatred towards his mother. later in life, he started using drugs. He said that parents who resort to smacking their children are not good parents because they cant cope with looking after their children.

In addition, 300 criminals aged 18-25 years old who were in prison for violent related crimes were asked if they were smacked as a child by their parents. A staggering 60% said yes. This may suggest, that experiencing physical punishment as a child can lead to violence in later life, backing up Dr Phill Jones’s theory.

Some children who were smacked went on to experience violence, yet some others didn’t. Again some children prefer to be smacked and some don’t. But would you really want to take the risk of your child growing up and not respecting you and thinking you’re a bully and getting into trouble with the authorities? Children isolate themselves away from their parents when they have been hit, this can seriously damage the parent/child relationship. If you choose this type of punishment please just take the time to decide if this is the message you want to send to your child. It is their behaviour you don’t like, not the child. There are more peaceful ways to punish your child other than punching them.

In conclusion, the evidence suggest that smacking leads to problems in later life such as crime and drug abuse. Also some parents who smack their kids may take the abuse to another level. In addition 93% of 1500 13-16 year olds said they prefer non-physical punishment however some parents believe smacking is a good form of punishment. Overall, the evidence suggest that smacking is not the best form of discipline and that parents smacking their children is seen as morally wrong.

Should parents smack their children. (2016, Mar 04). Retrieved from https://studymoose.com/should-parents-smack-their-children-essay 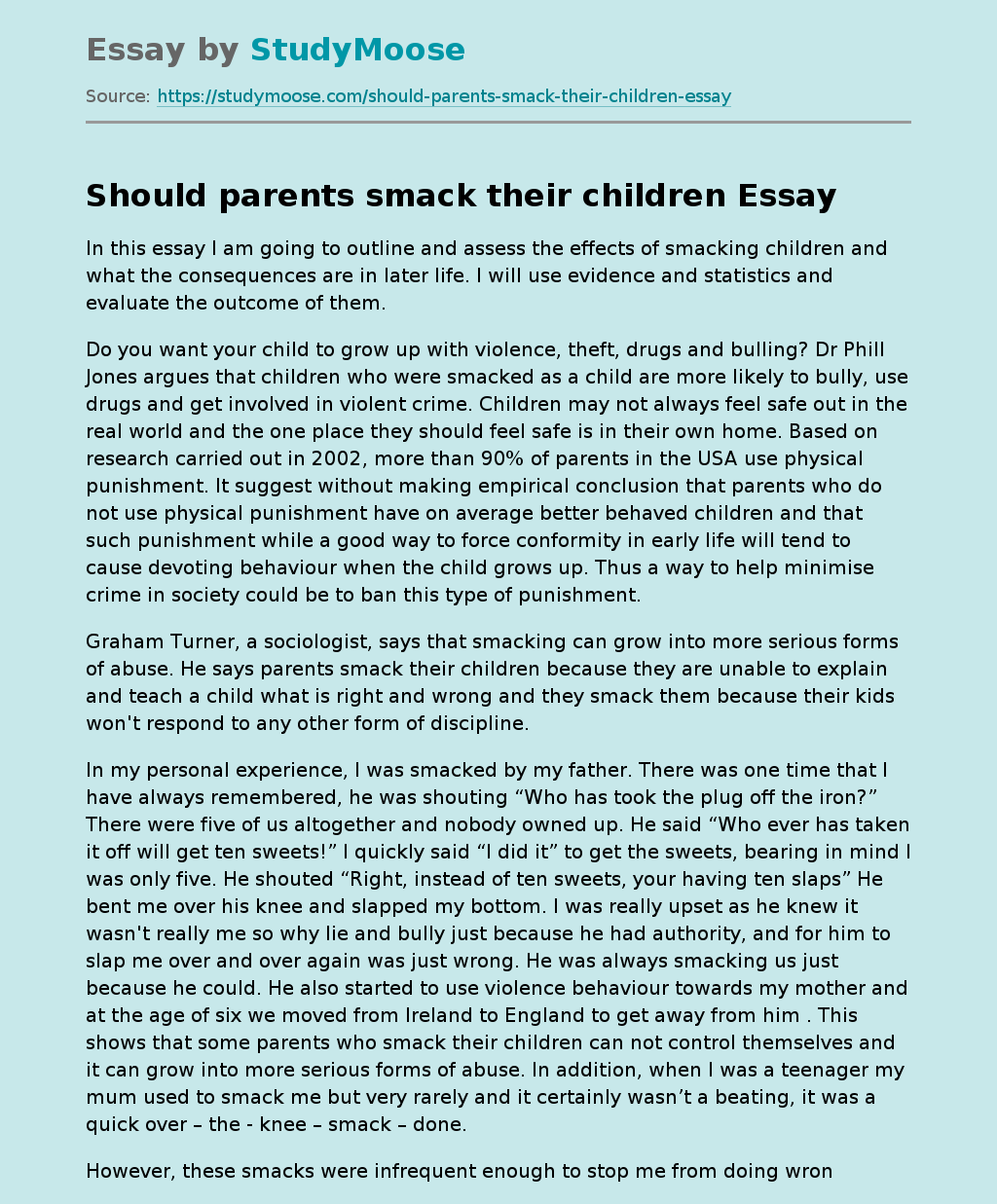